In a Vase on Monday — Lilies from my garden!

What was I thinking? I've gardened here since 2005 and only just planted lilies this spring. WHY!? I couldn't tell you. I guess I thought they were difficult and demanding? Last spring a friend posted a question on Facebook, asking for recommendations of lilies to add to his garden. I started asking questions and decided when I attended the Northwest Flower and Garden Show in Seattle I would buy a couple from their vendor. I am so glad I did... 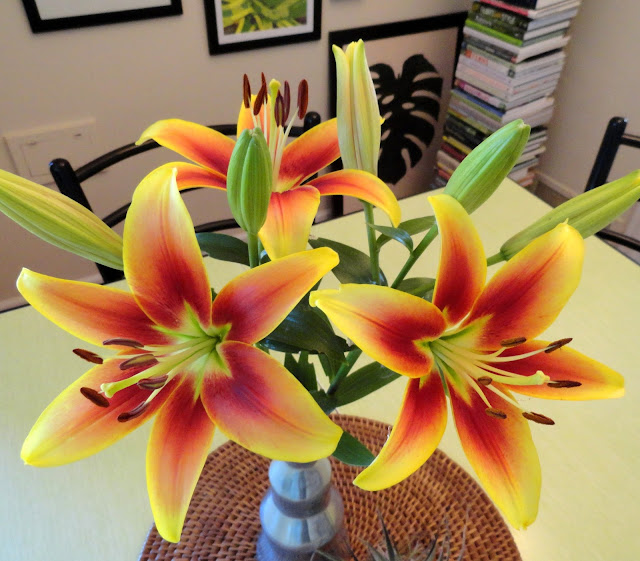 I'd learned I probably wanted to go with Orienpet Hybrids (a cross between Oriental and Trumpet Lilies) but all that went out the window when I saw the photo of the 'Kaveri'... 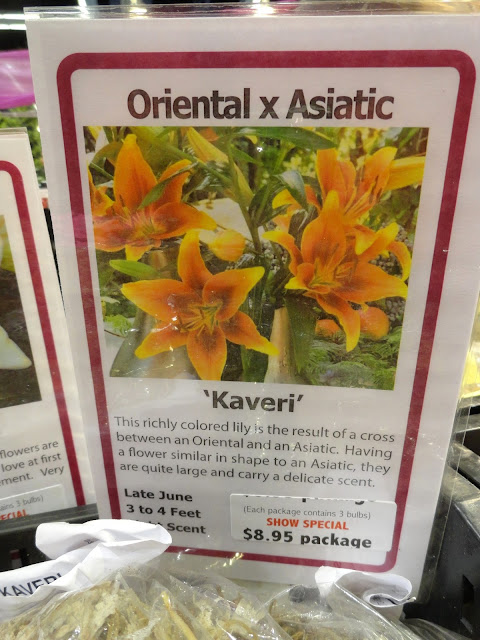 Then when deciding where to plant them I was at a loss. Long story as to why, but they ended up kind of tucked in next to the fence, behind the Loquat on one side and Hamamelis on the other. Not the best for garden enjoyment but perfect for cutting without guilt. After all they were basically hidden away, I had to liberate them! 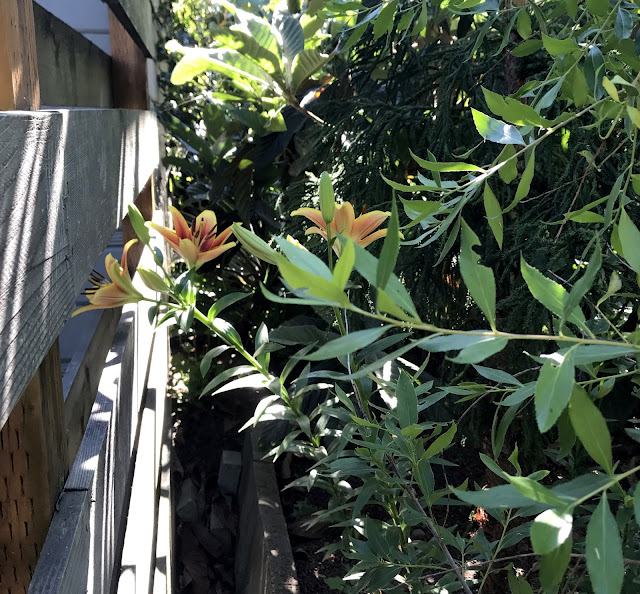 They're even better than the photo promised. Creamier, less "tart"... 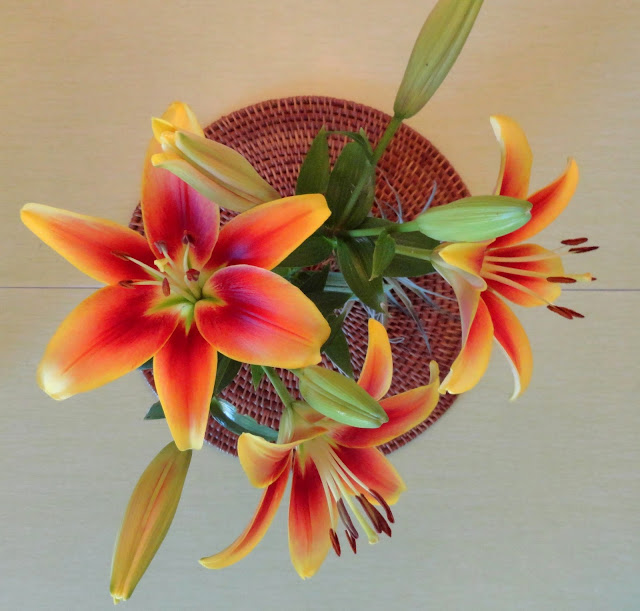 When it comes to big sexy blooms like this you don't need anything else in the vase... 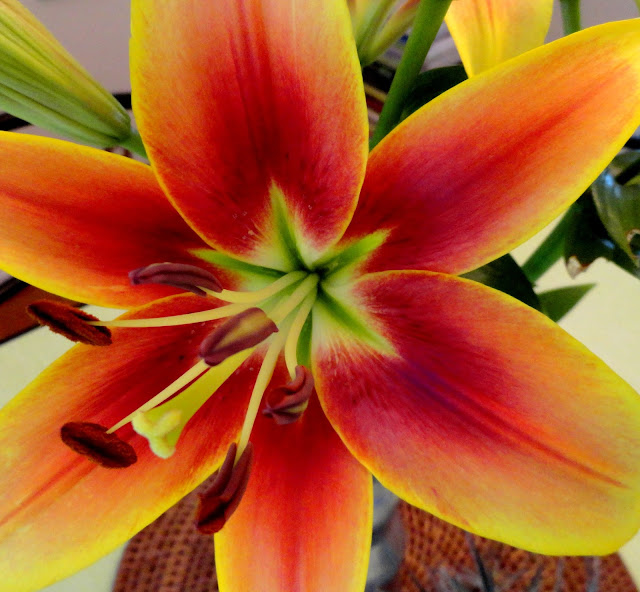 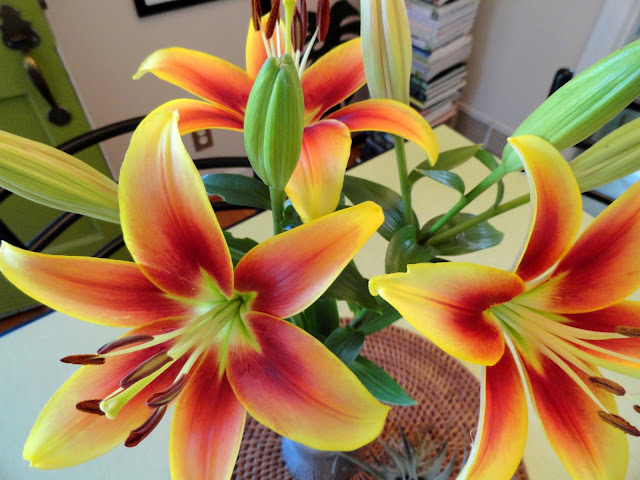 My other purchase was 'Conca d'Or', because I think that's what my friend Heather shared with me last July (here)... 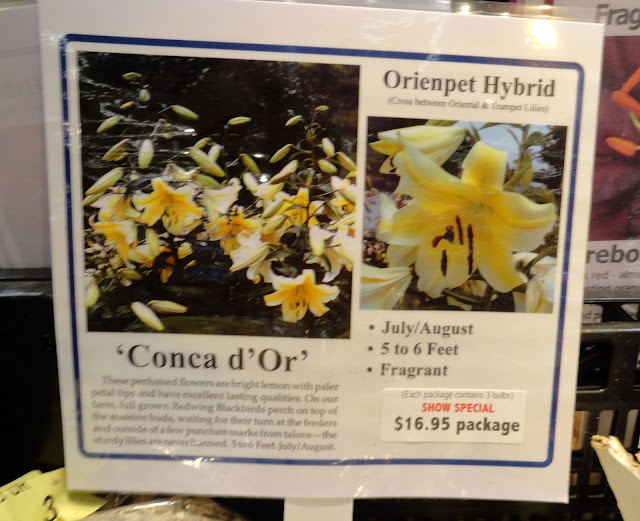 I've been watching them develop and propping up their heavy buds. I was surprised to find one of them open on Sunday morning. 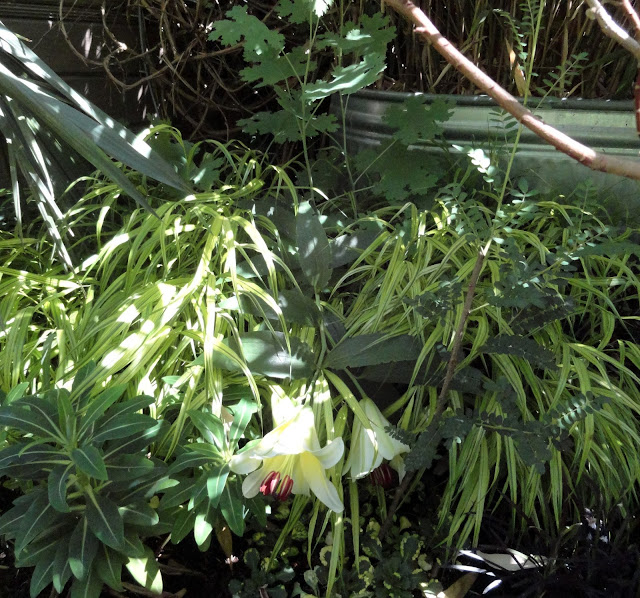 Since it refused to stay where I'd propped it I practically had to cut it, right? 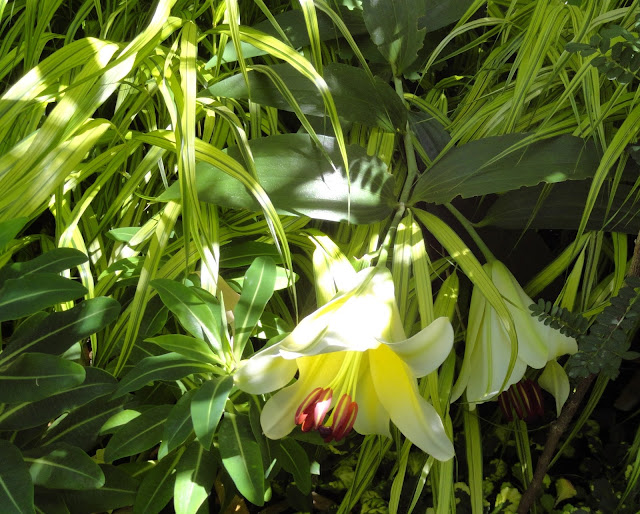 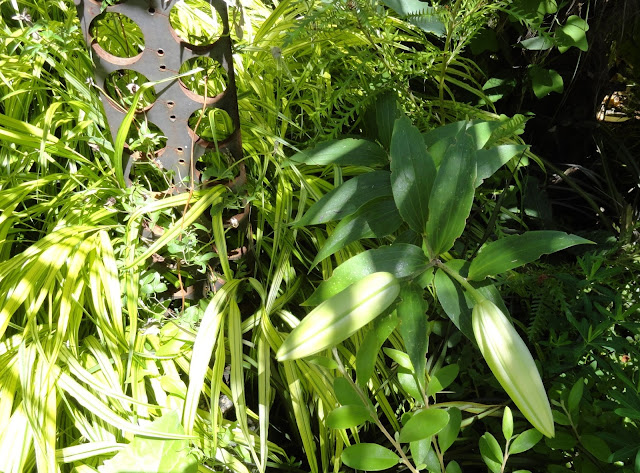 And this one, are staying semi-upright in the garden. 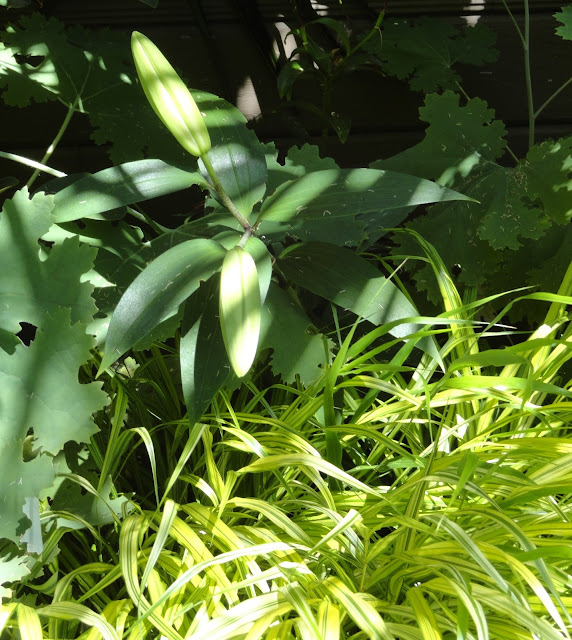 Honorable mention to this, my only other lily, an inherited (with the garden) 'Stargazer'. It always blooms for my birthday which is later this week. Looks to be on schedule! 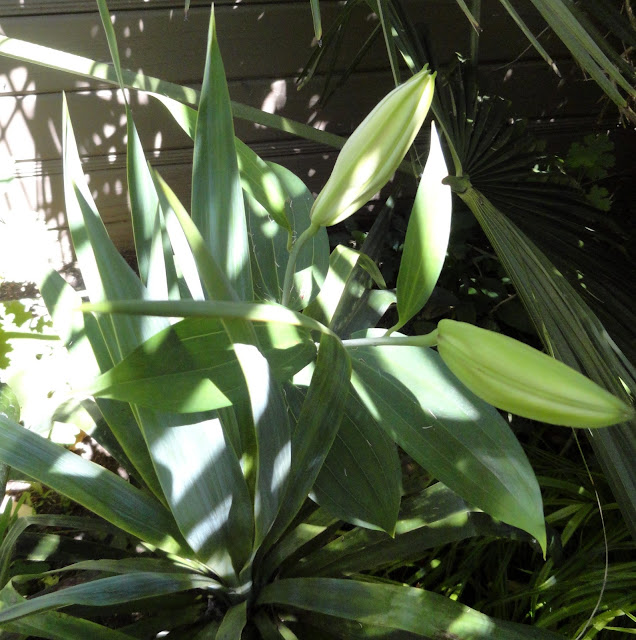 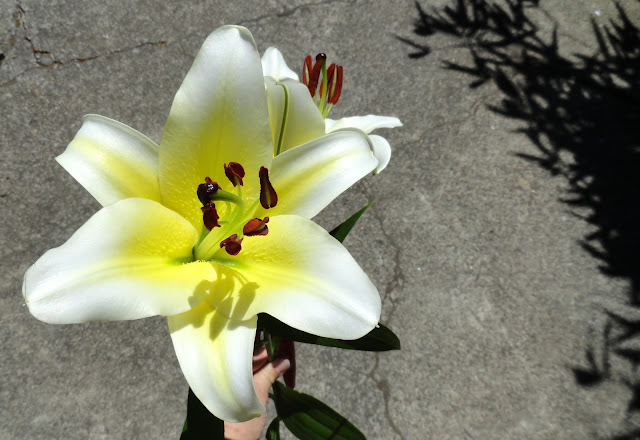 Since Andrew was already a little freaked out by the orange stamens on the 'Kaveri' (stain potential) — which are minuscule in comparison to these — I removed them before taking them indoors. 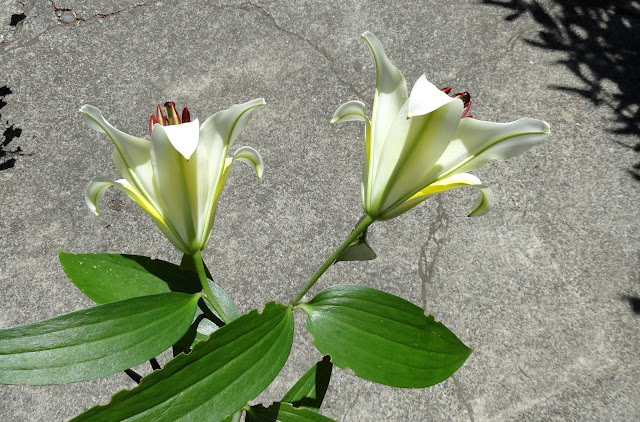 The color contrast with the orange stamens would have been nice, but c'est la vie. There's still a lovely contrast between the two different colored blooms. 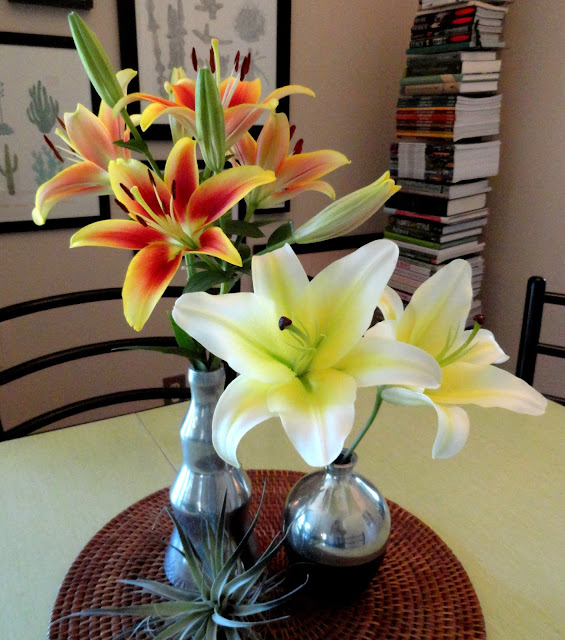 Oh and the 'Conca d'Or' brings that lovely lily scent into the house. 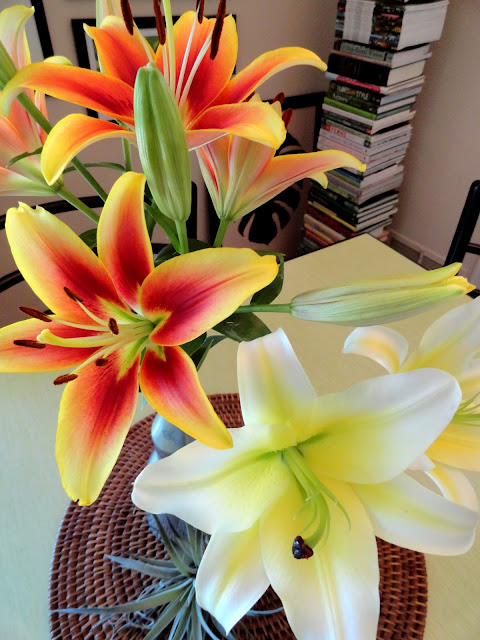 I'm in heaven and will definitely be planting more lilies next spring, I'm hooked! Visit Rambling in the Garden for links to all the bloggers sharing their Monday vases.... 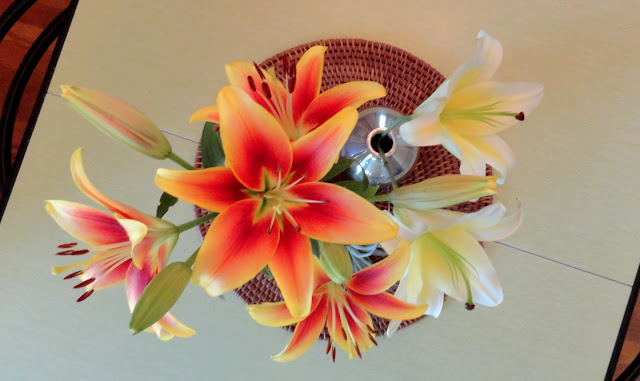 Labels: flowers, in a vase on Monday, my garden