The cool plant nobody sees...

Some of you will recognize this plant-centric garden as belonging to Sean Hogan, the owner of Cistus Nursery. 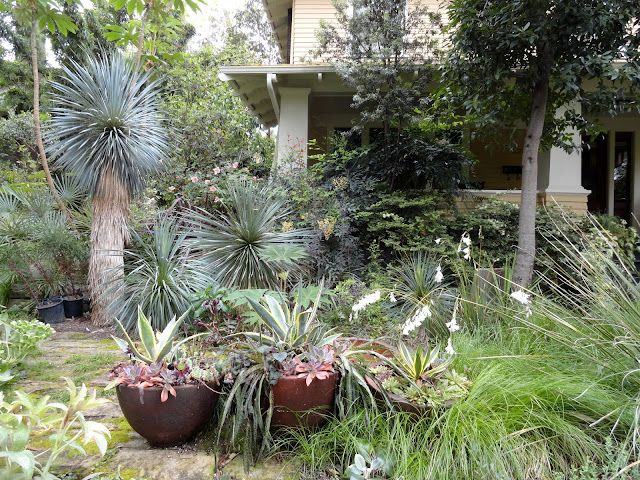 Back during the Hardy Plant Society of Oregon plant sale weekend, and the socializing that goes along with it, I discovered a planting in Sean's garden that had me thinking on reproducing a version of it in my garden. This is the plant being discussed, Pittosporum patulum. 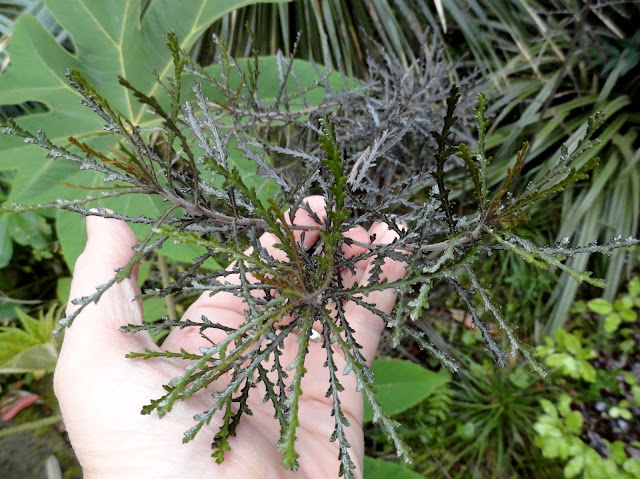 Can you see them? A couple of shorter ones at the bottom, in front of the Tetrapanax leaves. Then another cluster to the right of the tallest Tetrapanax leaf. Finally a few more up near the yellow berries. 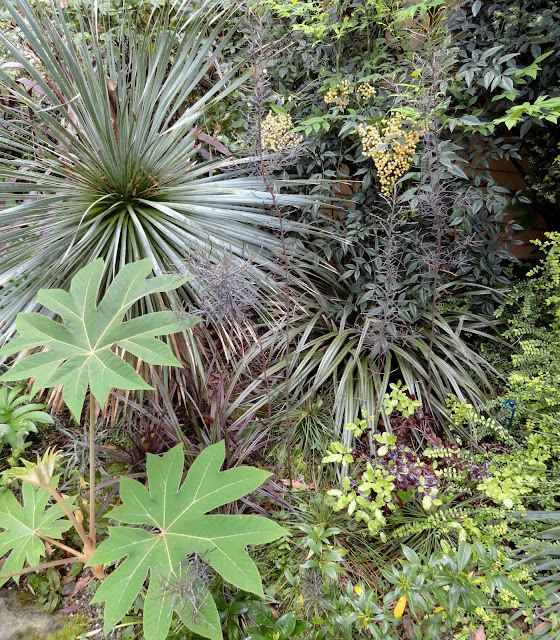 They are striking, but easy to miss. 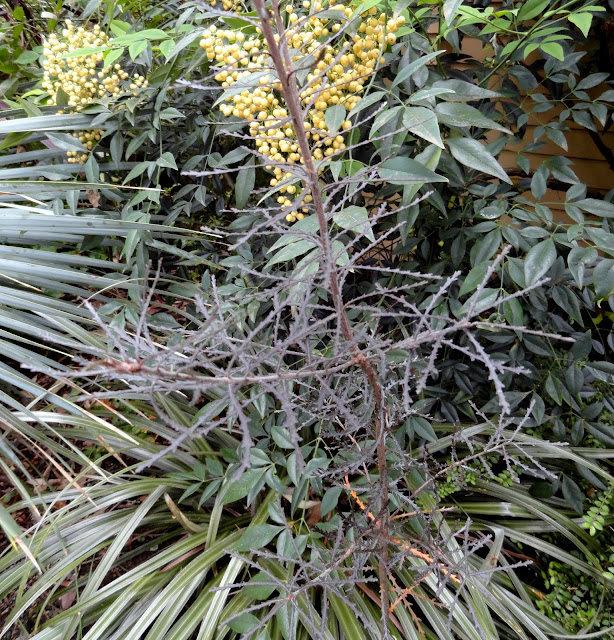 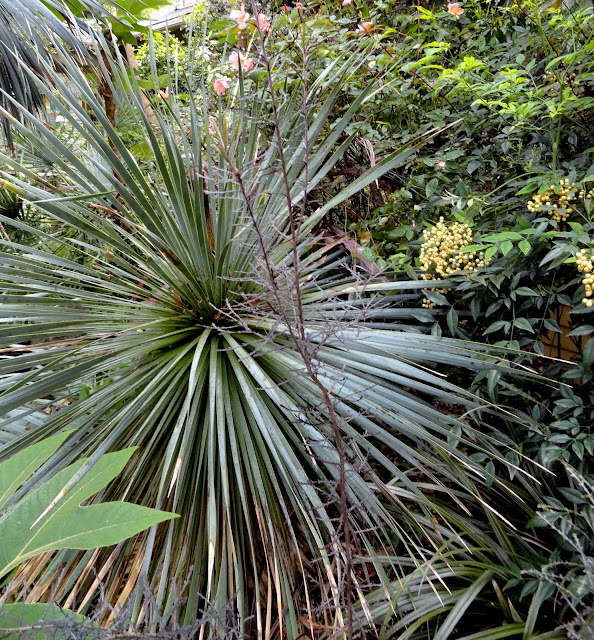 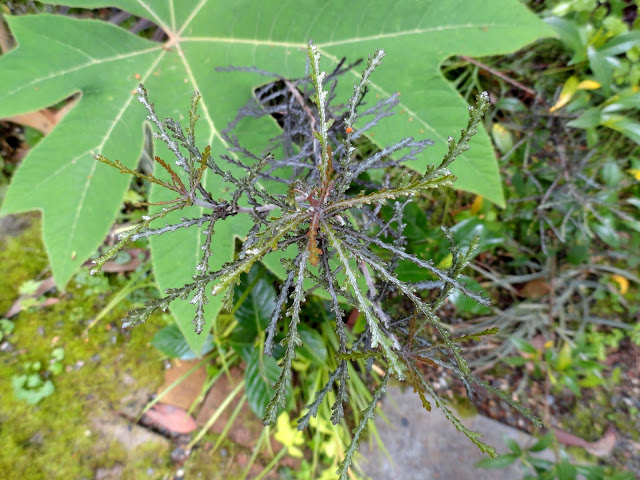 Here's that same plant in my garden, a gift from Sean back in summer of 2013, it was just a tiny thing then. 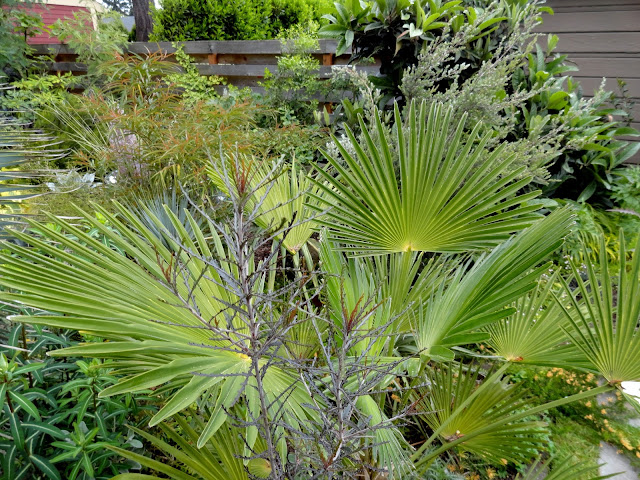 So tiny in fact that in my rush to protect tender plants for a cold spell over the winter of 2013/14 I didn't even see it...and thus it went though 12F unprotected and challenging its assumed hardiness. The Cistus description: "A most unusual member of the genus from New Zealand southern South Island, endemic to only a couple of spots along the Bellcloutha River. Growth is narrow and upright to 8-15' with black, spidery leaves in youth, enlarging only somewhat in adulthood, with more rounded bright green leaves and a multitude of deep maroon flowers said to be the most fragrant of the genus, reminiscent of carnations. This should make a fine new addition to the garden, especially the Goth garden. We have surmised hardiness to zone 8 that has been verified by surviving 12 °F in winter 2014 in the garden of our super friend Loree, where she and the plant survived the winter unscathed." Ha! Gotta love that. 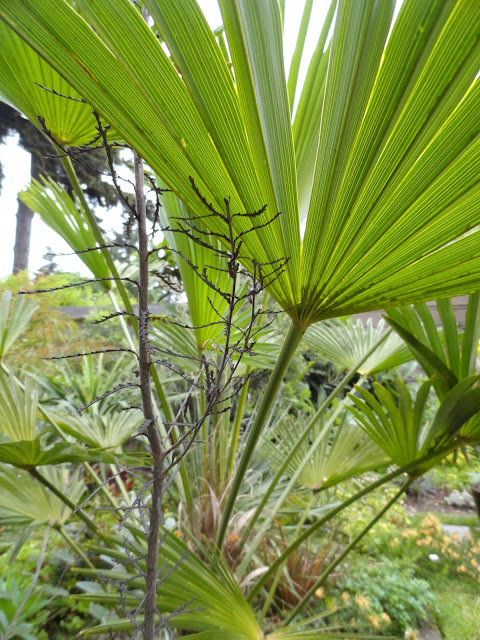 Anyway, the whole point is that nobody ever sees this plant, and that's wrong. 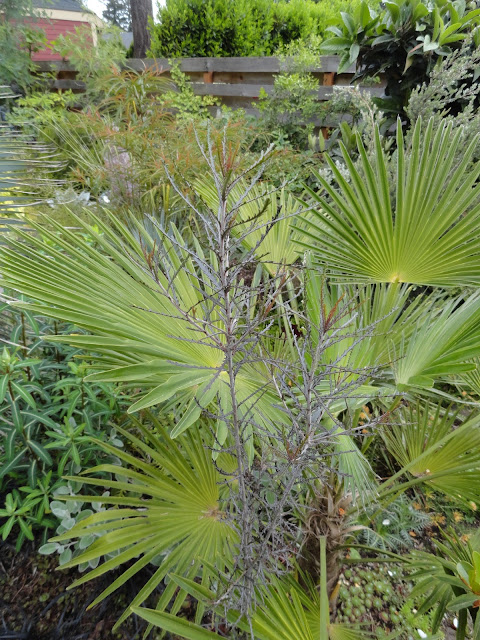 So I decided to do like Sean did (not the first time I've copied him) and plant another nearby. Hopefully with increased numbers comes increased visibility. 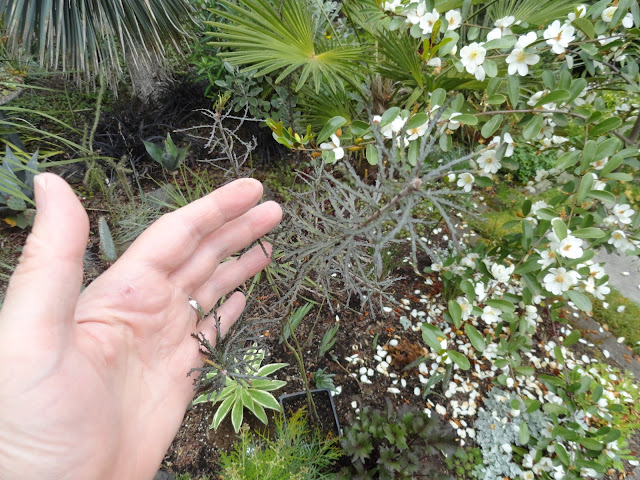 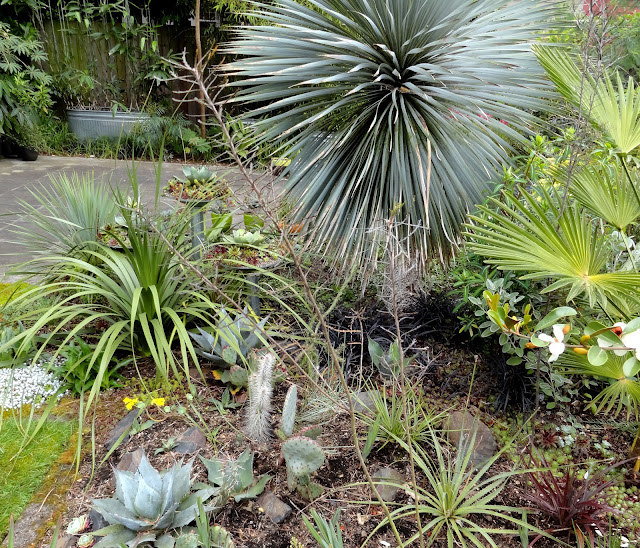 Ah well, it makes me happy even if nobody notices. 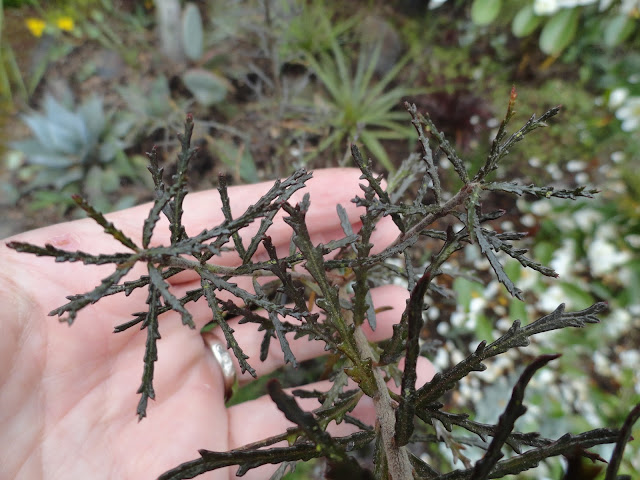 Okay, and of course since I was at Sean's place I had to snap a few other photos. Here we have a darling little Pittosporum tenuifolium 'Atropurpureum'... 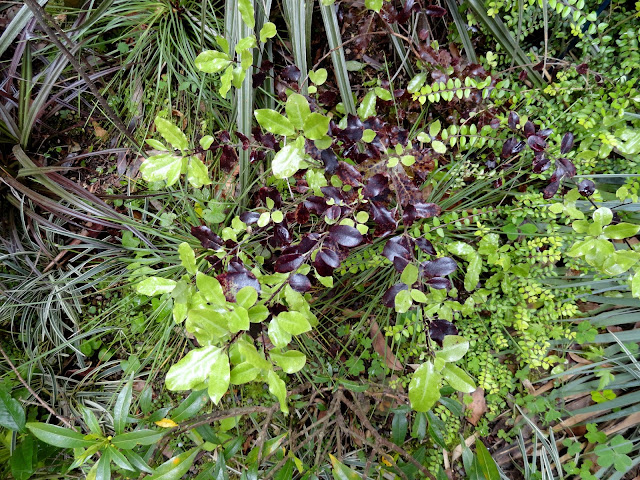 And a blooming something that I thought was a Dierama pulcherrimum... 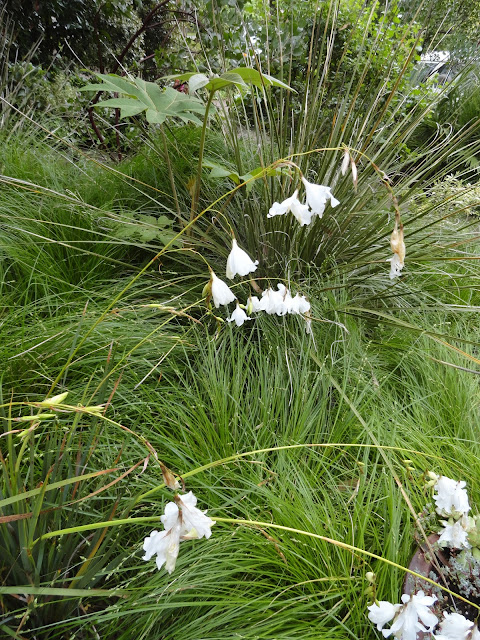 But now I'm not so sure? Maybe? 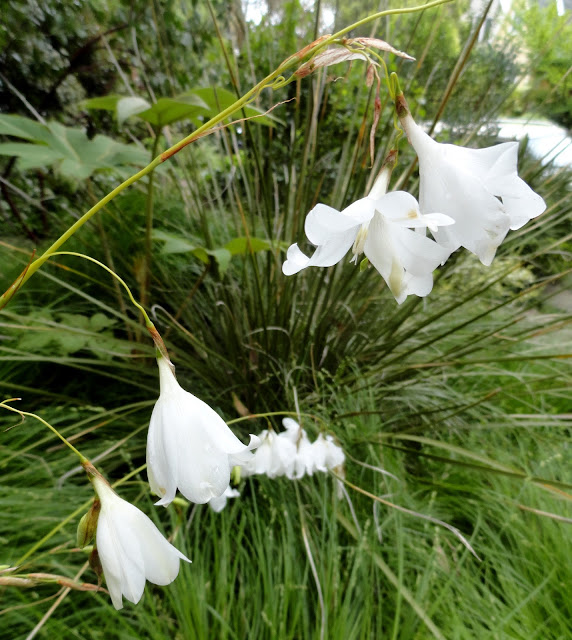 Pachystegia insignis. My poor plant is languishing in a container. I really need to just take the plunge and put it in the ground. 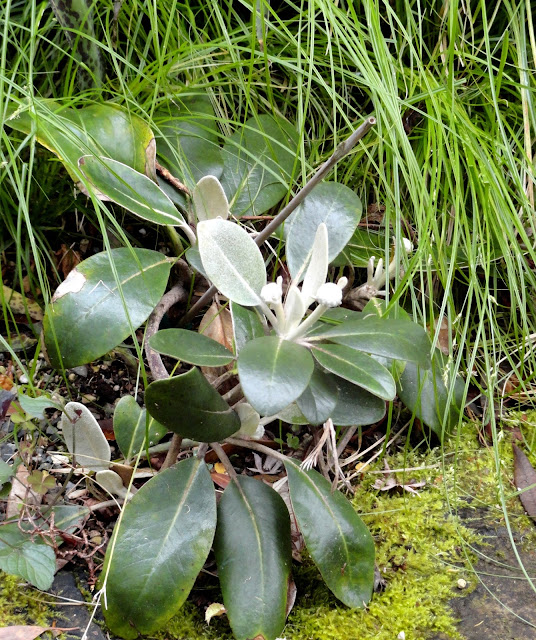 Of course there are Agaves... 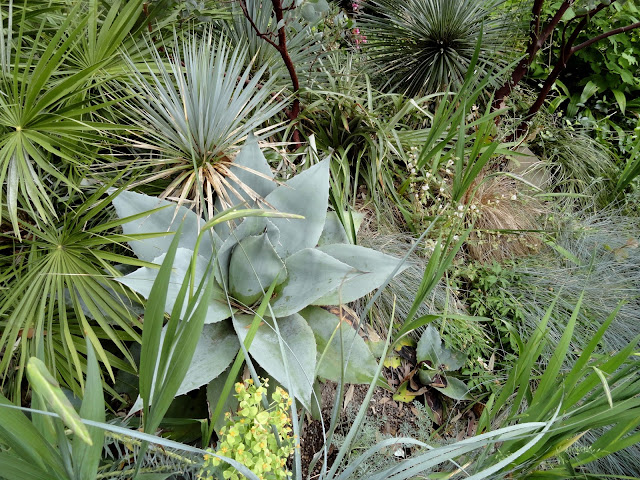 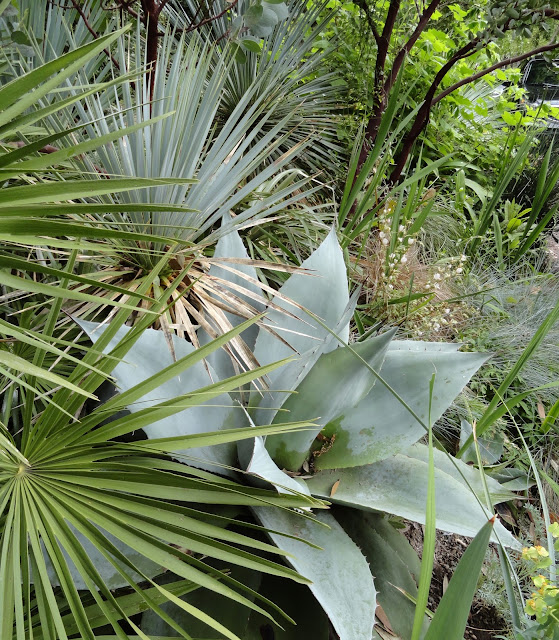 And this! The new growth on a Camellia, I think C. 'Night Rider'... 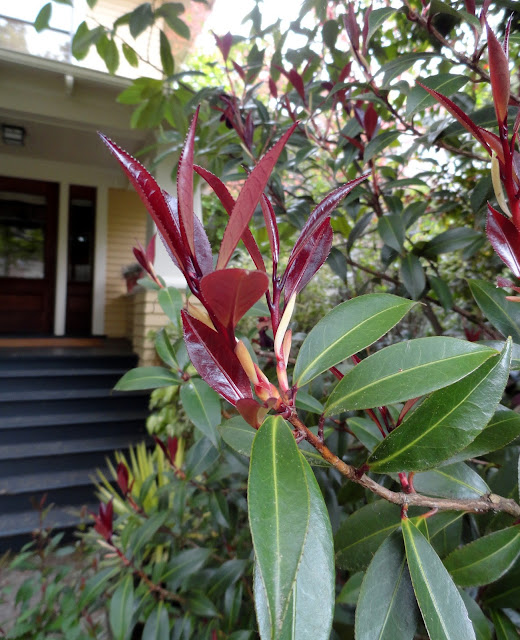 It matches the flower! 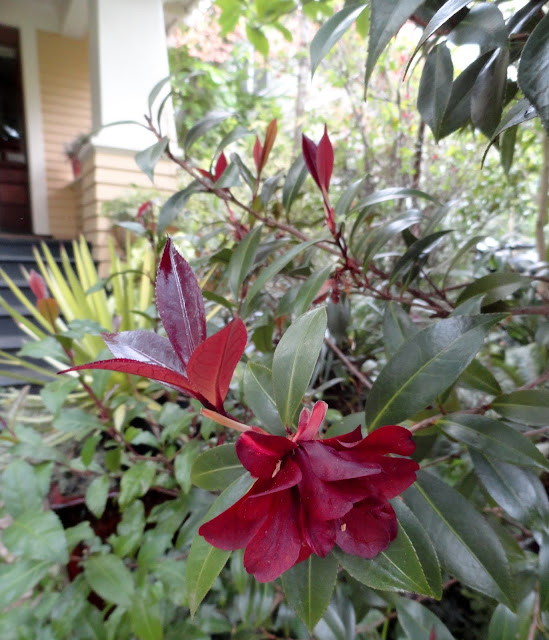