As I'm sure I've said a dozen times or more, I am very lucky to live in an area rich with amazing nurseries. Just last week I decided to visit Cistus Nursery, no real purpose in mind, just the luxury of a free afternoon. I wandered and enjoyed, knowing perhaps I'd fall in love with something I had to have. Naturally I did, Leucadendron 'Jubilee Crown'... 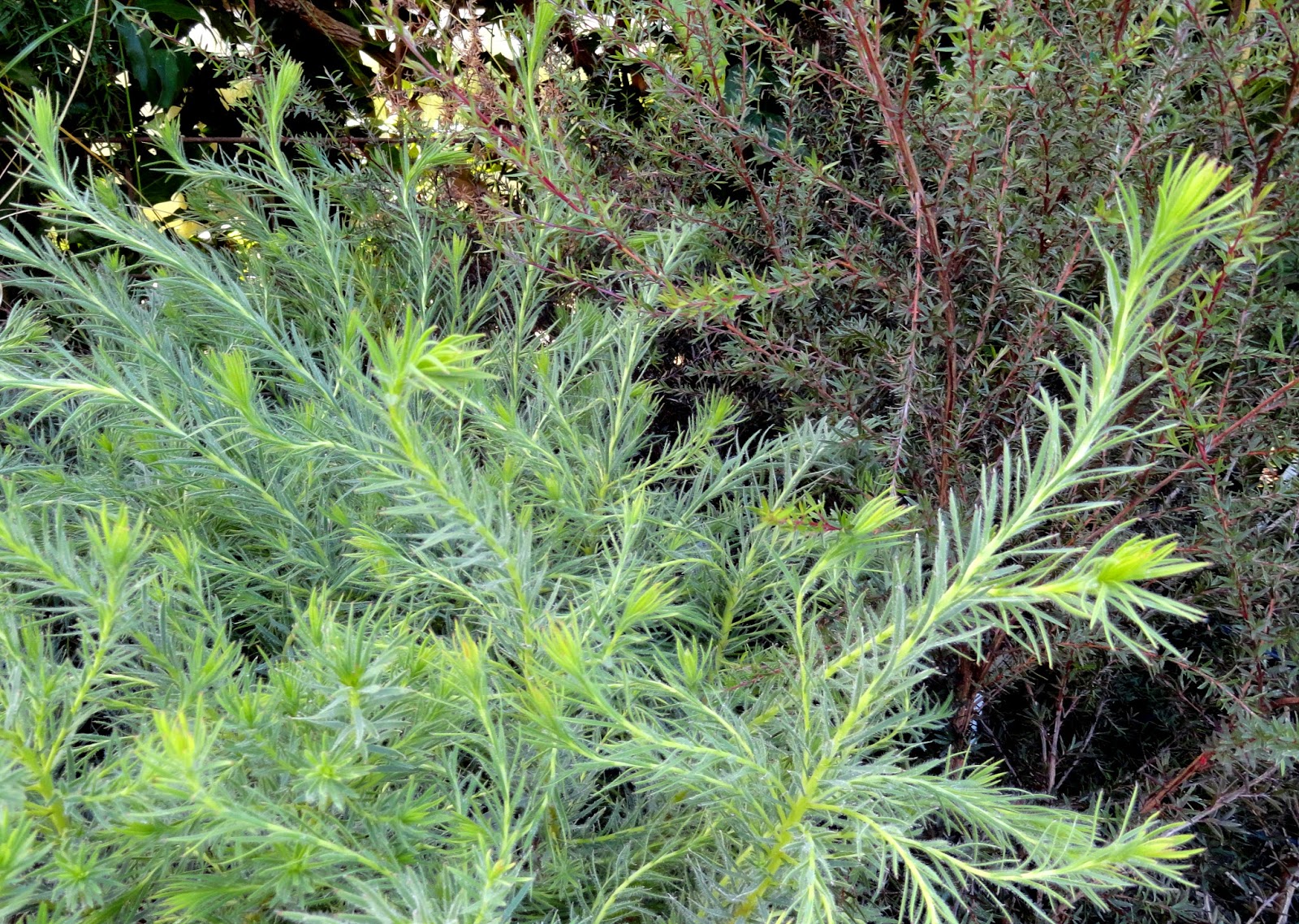 It has a similar airy soft feel to that of Adenanthos sericeus (Coastal Woollybush) and Phylica pubescens (from Annie's Annuals, loved and lost), but it's different. The description: "handsome medium-sized South African shrub with gray-green, red-tipped rainbow foliage and very cool pink to maroon cones. Height and width to 4-6'. Prunes easily into a low hedge or border planting. Feeding promotes faster growth, but avoid phosphorous at all costs. Water well to establish; after that, extremely drought tolerant. Full sun. Well-drained soil or container. Frost hardy to USDA Zone 9." 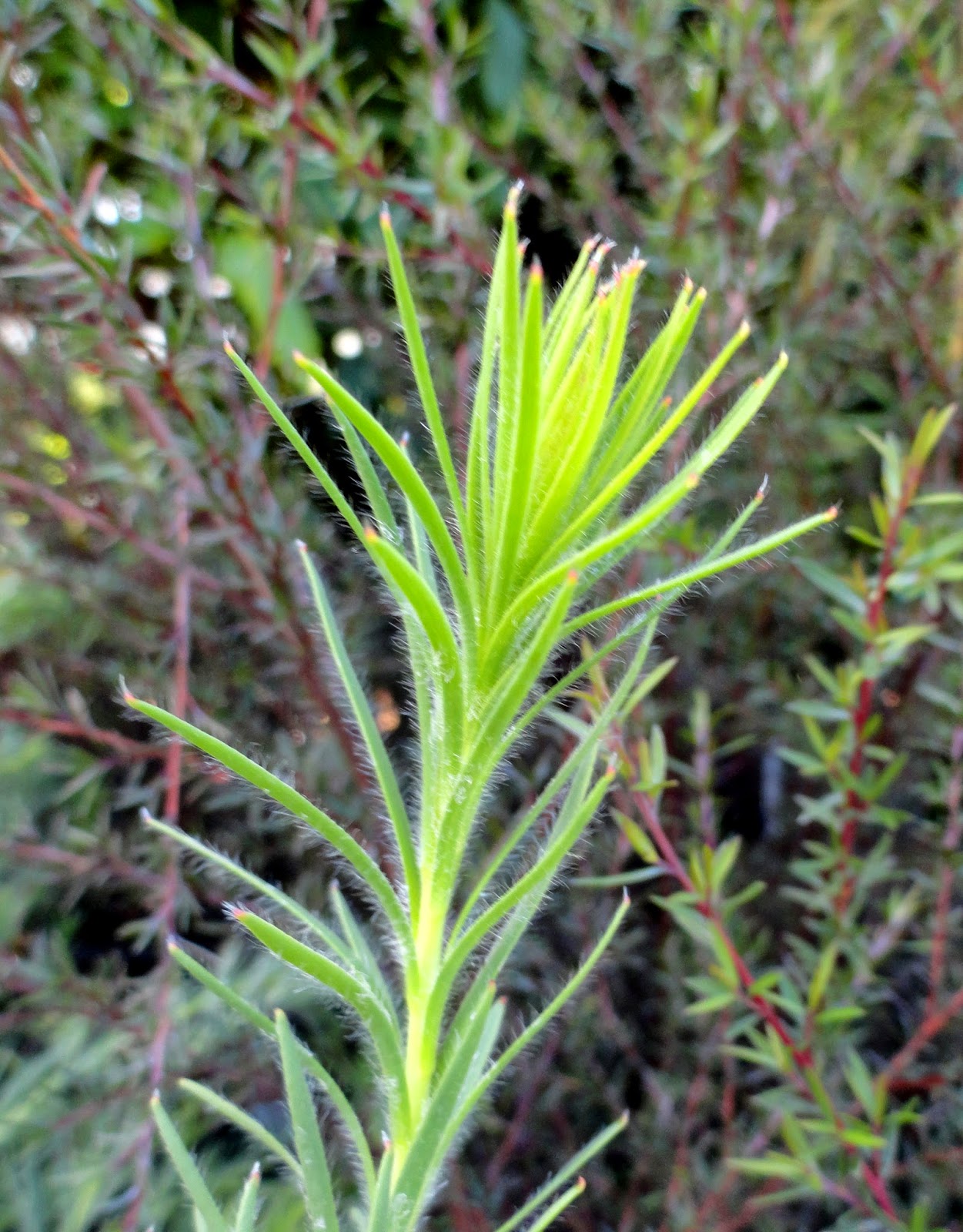 I also picked up a Caesalpinia gilliesii, my second this year (third plant "ever" if you count the one I lost last year). I wrote more about this one yesterday, on the plant lust blog. 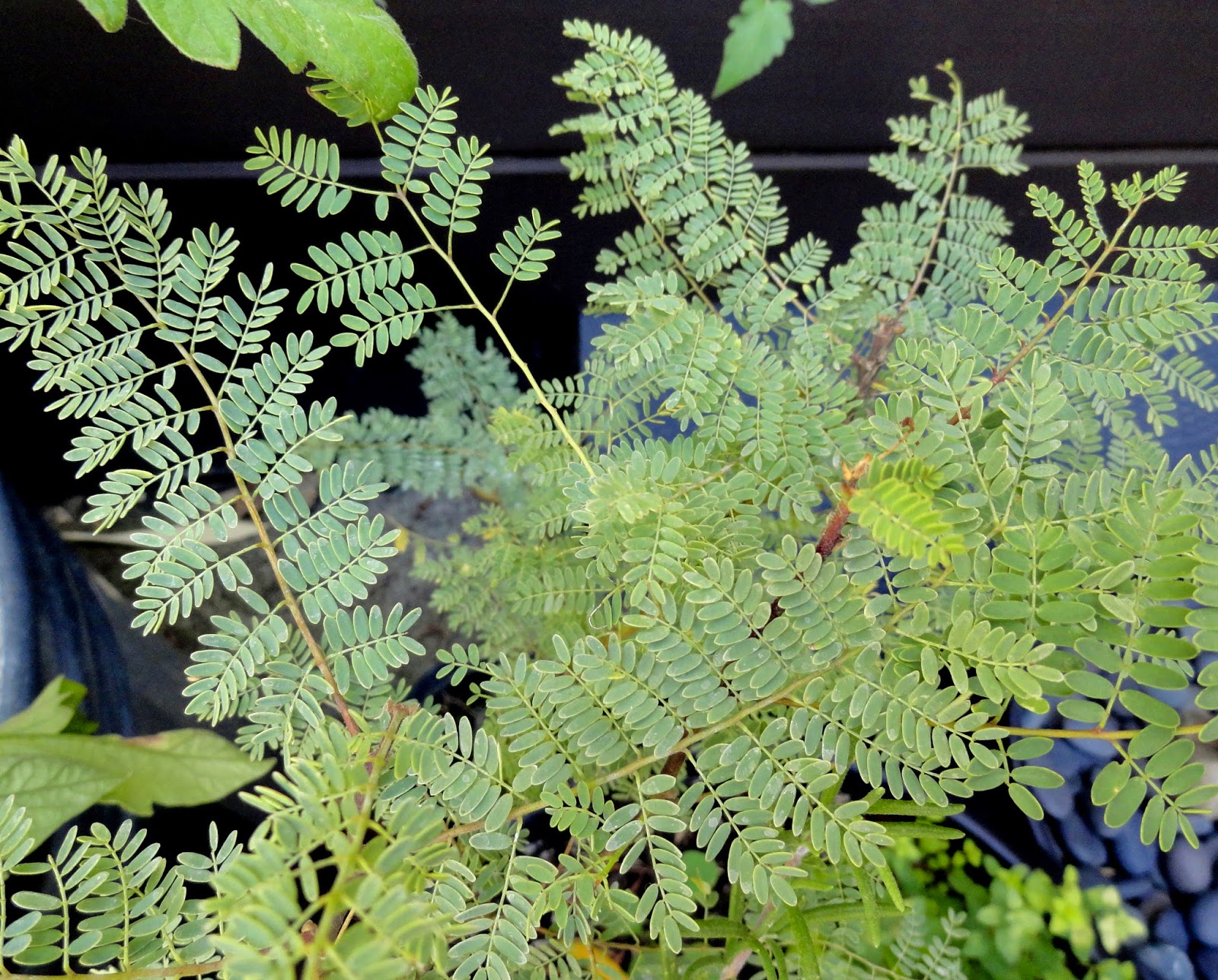 If there was one plant I thought I'd be coming home with it's this, Delosperma sp. 'Leea Koppie'. I spied it in passing last time I was at Cistus, just for a moment. I don't know why but ice plants just don't grab me like they should. Even this one with the electric orange flower. I stood there looking at it, knowing I should just buy it, but I didn't. 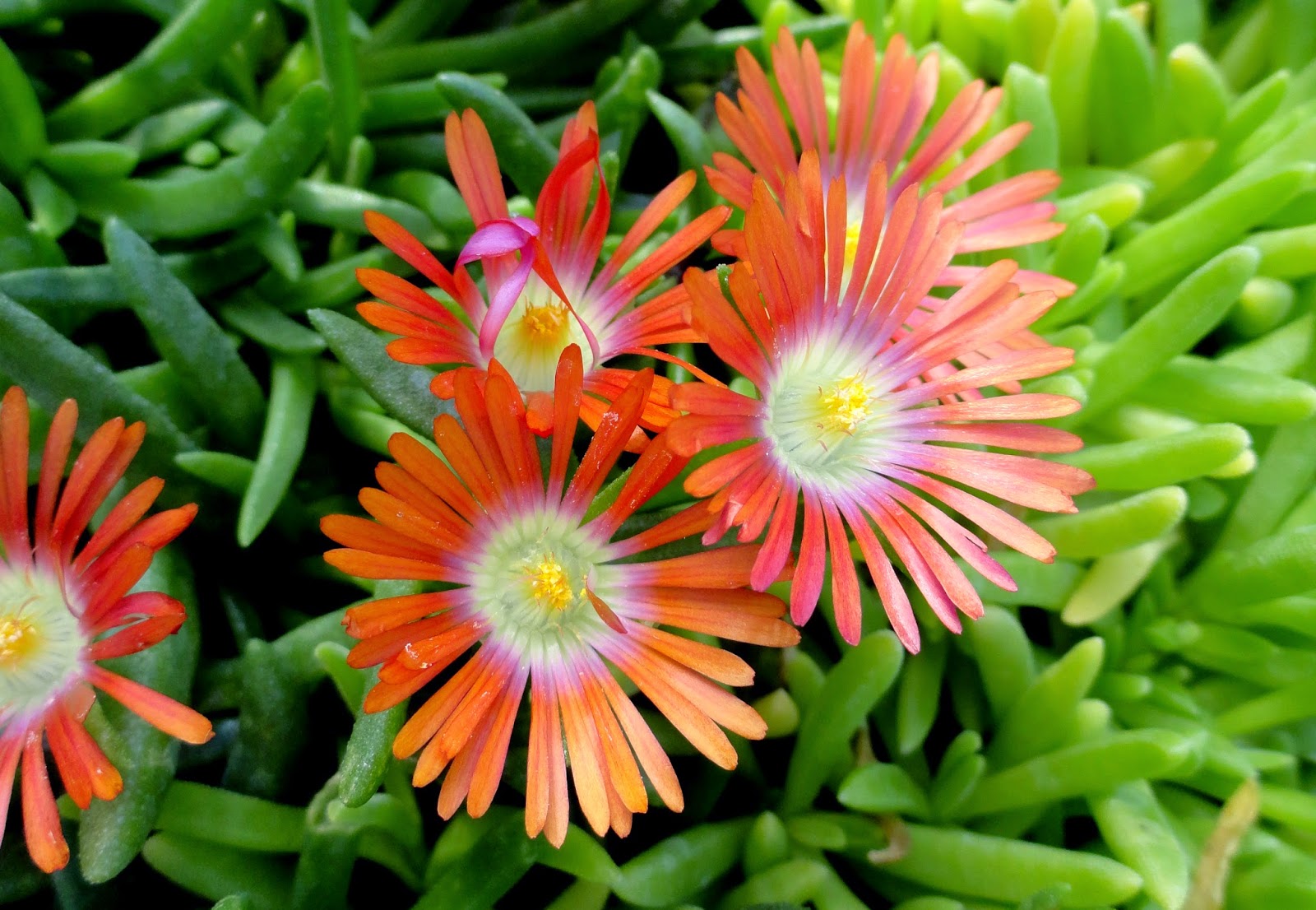 This however, Ficus afghanistanica 'Silver Lyre', I've lusted after for awhile and finally came home with. Check out the photos on plantlust.com and you'll understand why: "A Cistus introduction...yet another hardy fig. We wonder where it's been all our lives. Native from Northern India to western Iran and Afghanistan and a delicacy there with its small, dark, very sweet fruit. We have selected this form from seed for its entrancing, filigreed, silver-green leaves of about 5-7". So far, ours have been for external use only as we have not tasted the fruit. Eventually might reach 15-20' in height; can easily be kept smaller with pruning. Sun to part shade. Very drought tolerant once established. Frost hardy to the upper edge of USDA Zone 7 so far." 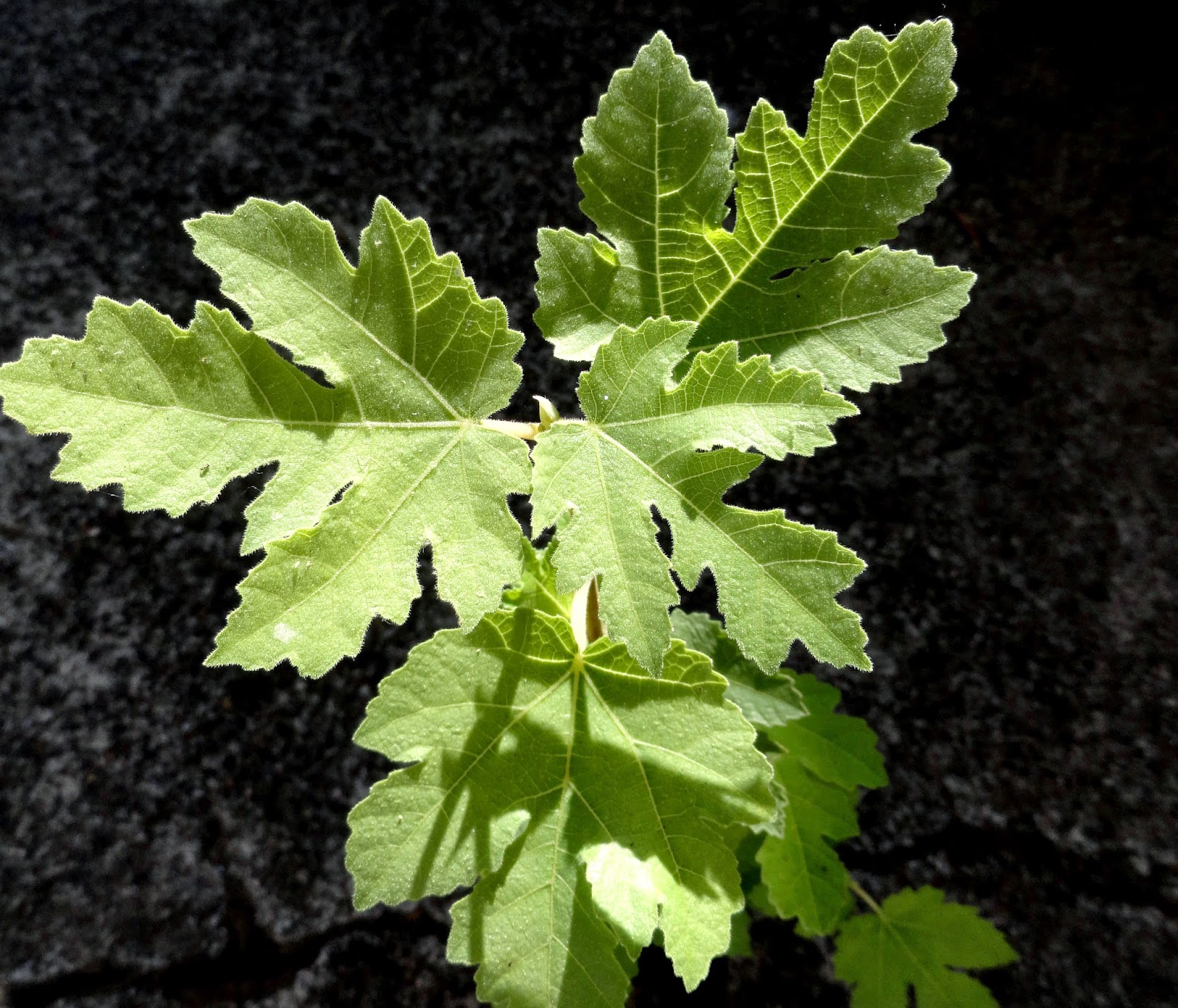 So that title, "discovering new plants," is really about these next three treasures which Sean Hogan pulled out of the greenhouses and handed to me. First is Dendroseris macrophylla, which I thought looked a little like Euphorbia stygiana. Instead it's a flowering plant in the Asteraceae family, from Chile. Sean says it can form rosettes two-feet across, you know what talk like that does for me! There is not much to be found about this plant online, although it is offered on the Cistus Mail Order list for Fall 2014. I think I'll be planting it in the front garden where the departed Brachyglottis greyi was growing. Love those leaves... 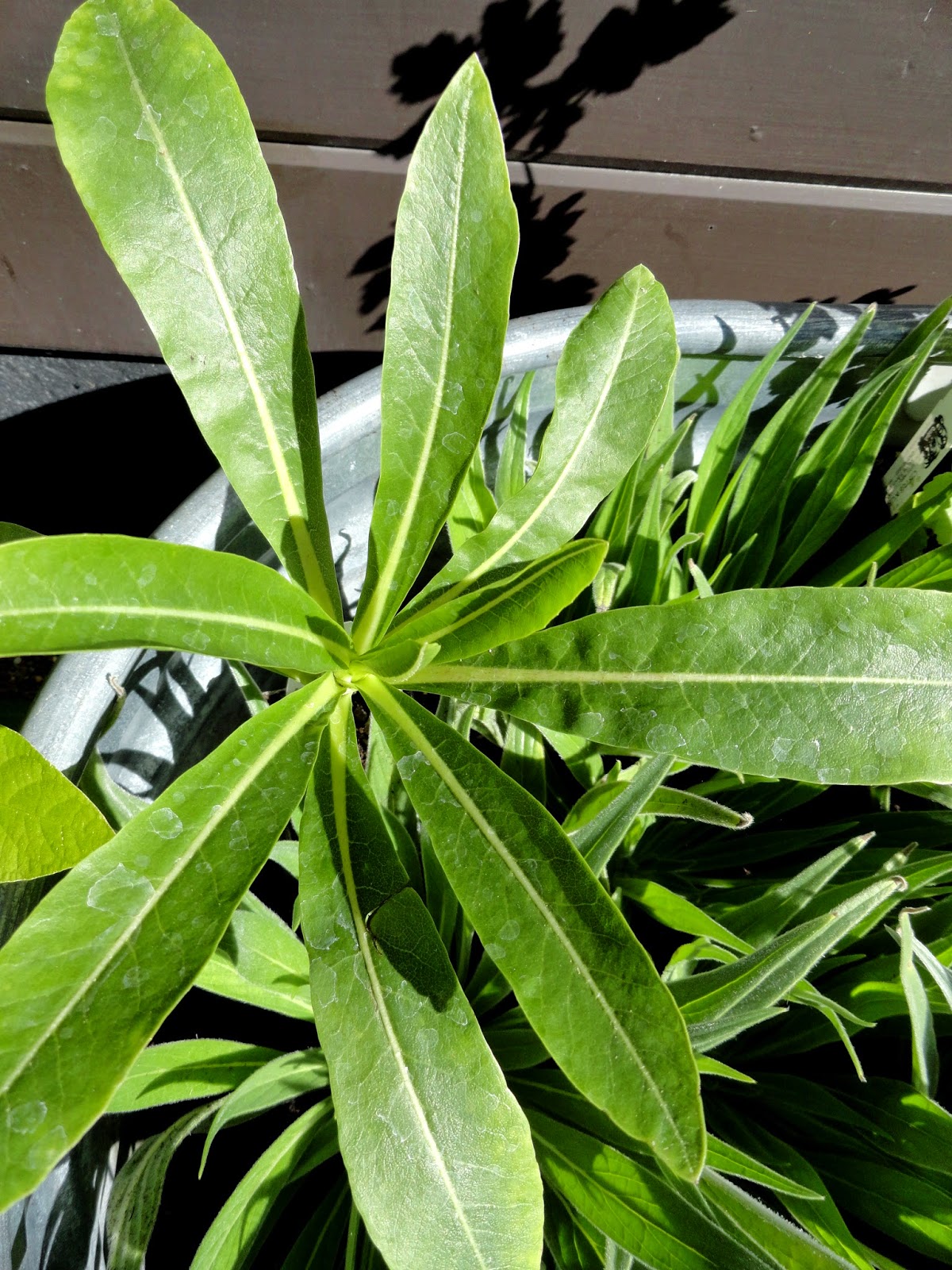 Perhaps this Bommeria hispida will be tucked in nearby, maybe snugged up to the Agave ovatifolia. 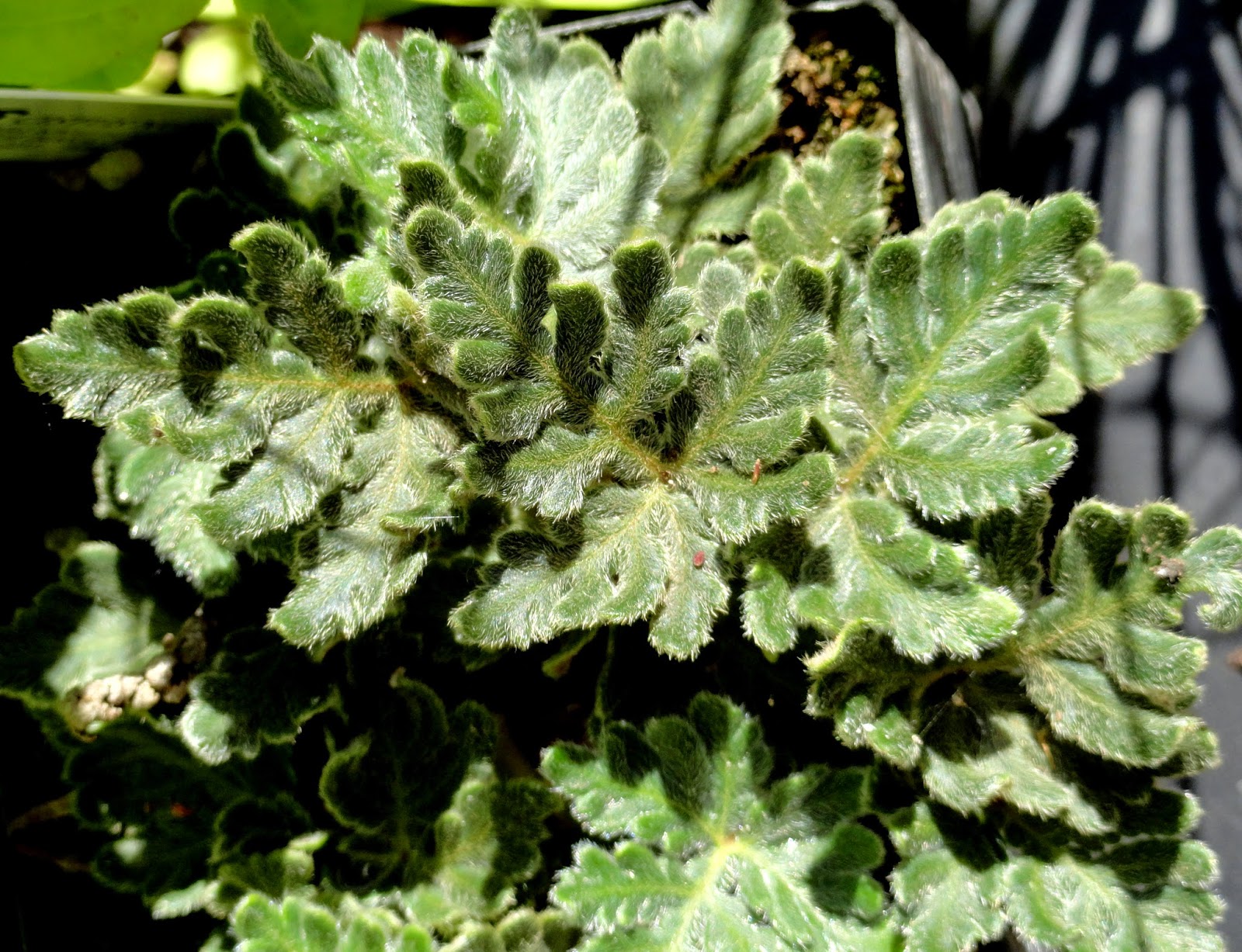 Native to Arizona, New Mexico and Texas (according to the USDA) the Western New Mexico University Department of Natural Sciences says "Bommeria hispida is a somewhat leafy appearing, hairy low, creeping fern. The younger fronds are dark green, but as they age they turn copper and red. The top surface of each frond is covered with short, straight hairs. The bottom surface of the fronds is very crowded with not only straight hairs, but also hairs that are curly, like wood shavings." It is a mat-forming evergreen fern which can grow to 5-ft across, collected at 6200 ft in the Peloncillo Mountains of Arizona by Sean, hardy to USDA Zone 7. So fury! 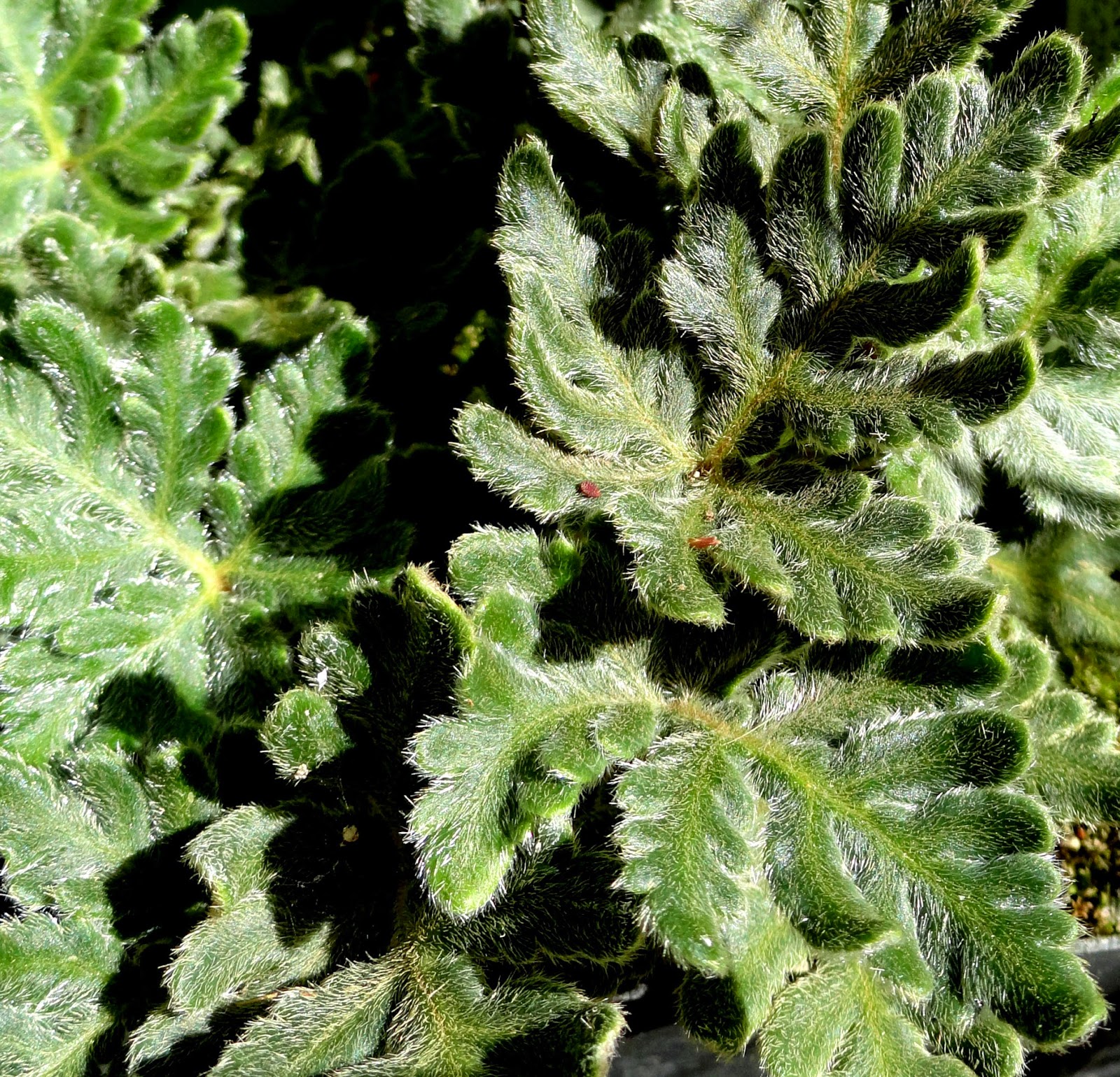 One more, Cheilanthes lindheimeri, it's a bad photo but a cool little desert fern which I am thrilled to plant and (hopefully) watch grow. From a collection made along the border between Arizona and Mexico (by Sean) it was found growing tucked up against pink boulders, and under various cactus and Agave palmeri. Also hardy to USDA Zone 7. And in case you were wondering, the ferns are also on the Fall Mail Order list. New plants, there's really nothing better... 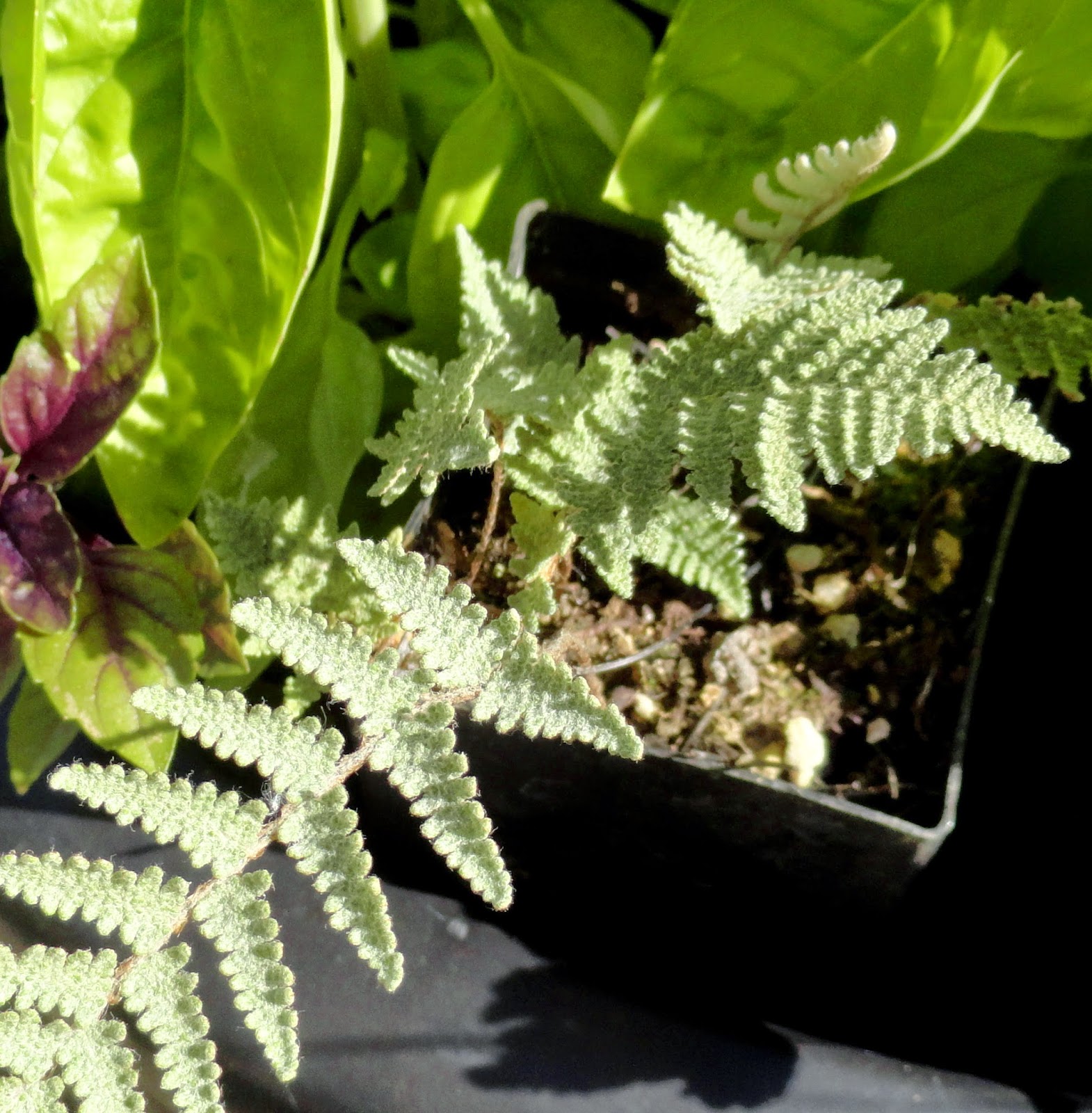