The sun came out yesterday afternoon; this was all the encouragement I needed to take the dog for a longer afternoon walk. We headed out thinking we were only going around the block (yes I took my camera) instead we headed towards the Kennedy School, never mind that it was only 45 degrees and I didn’t have on a proper coat, the sun was out! 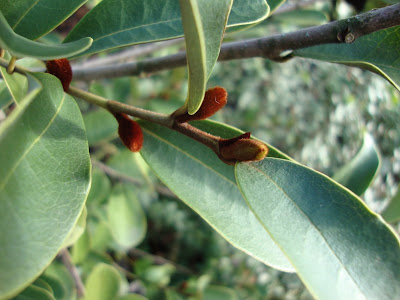 As we circled the KS gardens many things caught my eye but the most interesting was a smallish shrub with amazing brown/rust furry buds. I am disappointed that my camera was unable to accurately capture their magic as they were positively glowing in the sun. 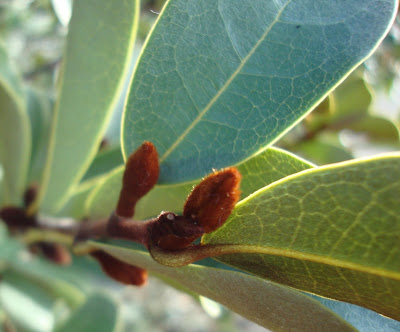 As I snapped pictures I looked for clues as to what this plant might be, but finally had to concede that I had no idea. I figured I’d end up sending off another email to the kind and helpful Kennedy School gardener, Erich, asking for identification. 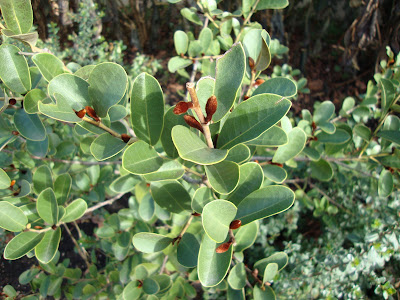 However as luck would have it I ran into Erich working in the garden! We’ve been exchanging emails for over a year now but never met. I finally got to meet the man responsible for the garden I enjoy so much! Naturally he knew exactly what plant I was trying to describe (when in awe of someone’s plant knowledge I seem to resort to using words characteristic of a 5 year old and saying things like “you know” – I’m sure he was impressed). He not only knew its name but also knew its former names (evidently this plant has had a bit of an identity crisis)…a true plantsman. 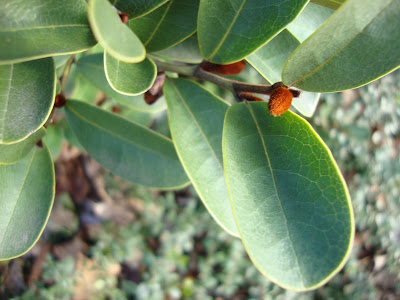 Here is a description of the same Magnolia from Cistus Nursery, although I’m unsure if the Kennedy School plant is a “round leaf”…

Magnolia laevifolia - round leaf
Stunning plant! Recently called M. dianica and previously Michelia yunnanensis but this plant is always fabulous with its graceful, ropey foliage; profuse, intensely fragrant white blooms in spring and summer; and first rate cinnamon indumentum on the buds in autumn! This form has pleasingly rounded leaves and a more compact habit than the straight species, reaching only 6-8 ft in time. Easily accepts sun to half shade with regular water. Frost hardy in USDA zone 8 and very possibly into mid zone 7. Magnoliaceae 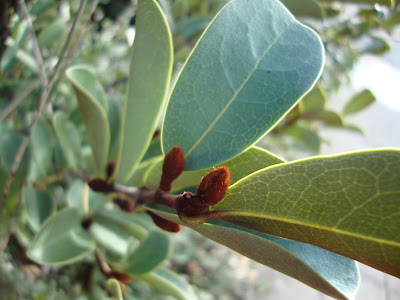 For more pictures including a look at the flower click on over to plant lust (where by the way you will now find over 1600 plants in our (growing) database!). 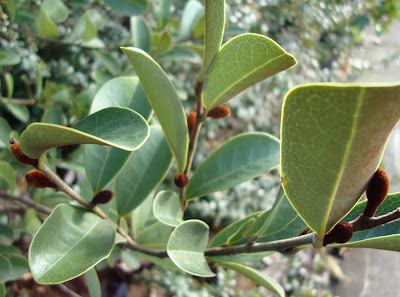 Erich said this particular plant had been in the ground for 3-4 years, so it’s had no problem with our last two bad winters, and he also mentioned that he’s just too busy to protect plants so they have to tough it out on their own. The overall shrub is so much better looking than this photo makes it out to be. 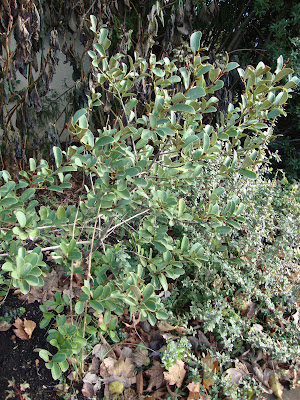 Guess what’s now on my lust list? I have to have this plant!

Labels: Magnolia, on the sidewalk