I love moss, so when I received an email from Tuttle publishing asking if I would be interested in a review copy of Moss Ball Bonsai (by Satoshi Sunamori) I said yes. 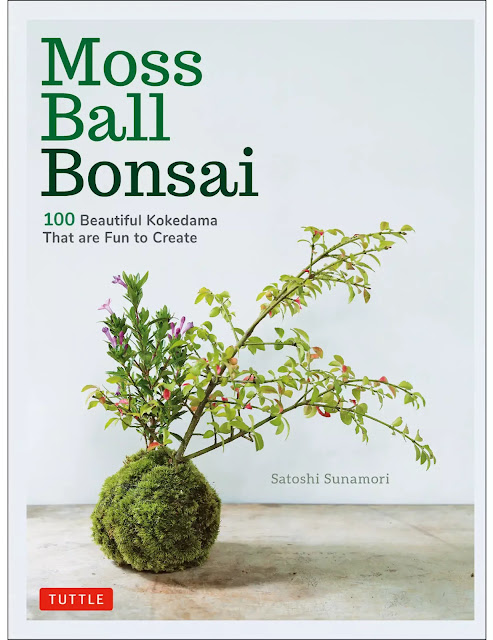 I also got Miniature Moss Gardens (by Megumi Oshima and Hideshi Kimura). Normally I run from anything to do with "miniatures" but what the heck. I decided to be brave and overlook that word. 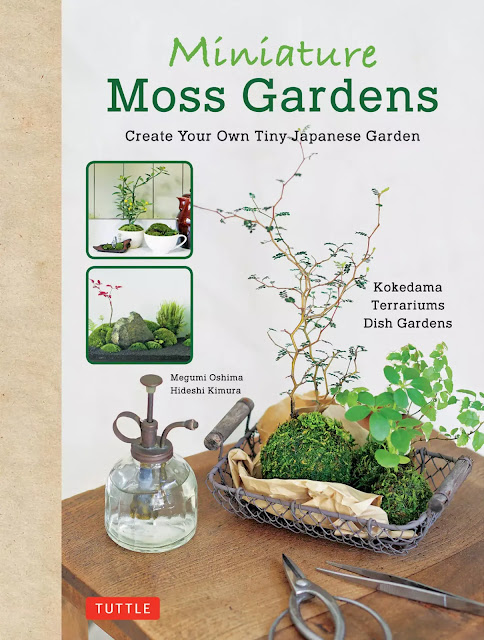 When it came time to review these books I could no longer find the email of the person who sent them to me, so instead of asking for images of pages to share I just went ahead and photographed them. Here's the table of contents for Moss Ball Bonsai... 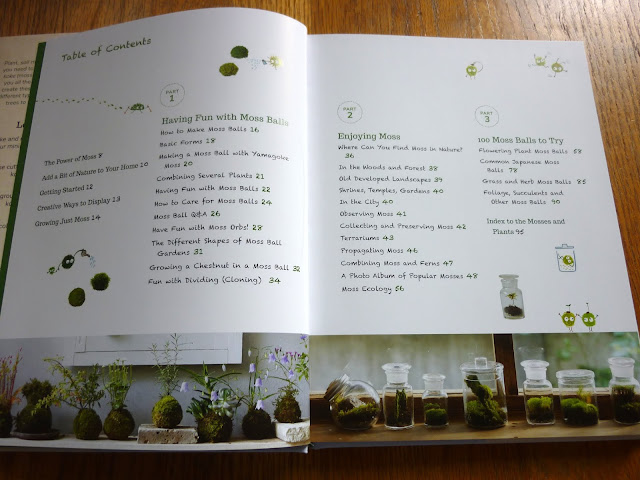 The books are an interesting mix of educational information, stunning photos, and fun, almost child-like drawings and add-ins. 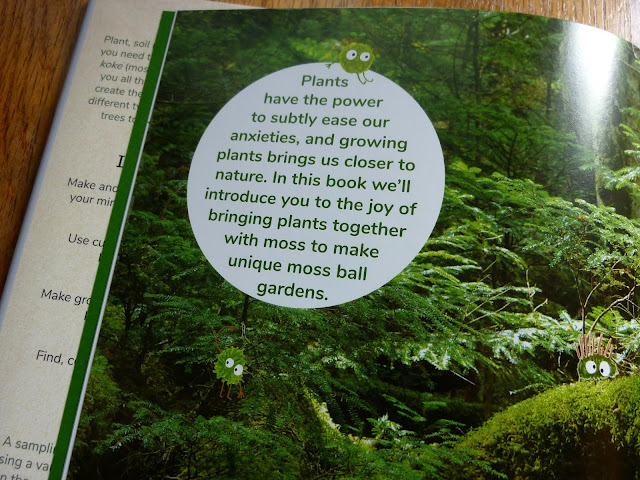 What is not clear to me is if these books were written in Japanese and translated to English, or if they were written in English by Japanese authors. On the Tuttle "about us" page they say: "Our fundamental values are as strong today as they were in 1948: to discover, create, publish, and deliver best -in-class books & products that bring the World closer together one page turn at a time. With Asia’s expanding economic, cultural and political influence in the world, the need for meaningful dialogue and information about this diverse and vibrant region has never been greater.​ Since 1948 Tuttle Publishing has given the world access to the cultures, visual arts, cuisines, languages, and literatures of Asia through the pages of our award-winning books." 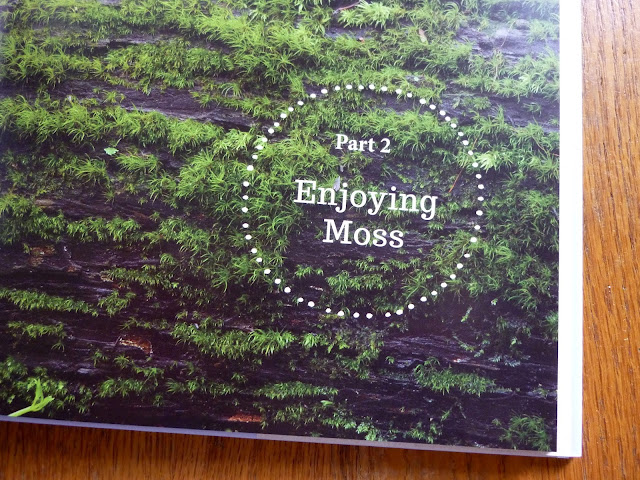 There is a section in the book on identifying mosses, but I haven't conquered that skill yet. Plus I've not seen a lot of the interesting types covered in the book. I took this mossy photo at the Oregon Zoo... 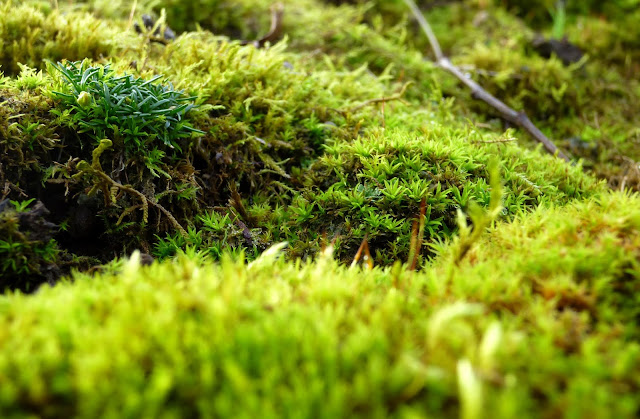 This container currently sits on the dining room table and full of bits of moss and lichen I've picked up while out on walks. The root-ball of the cryptanthus is encased in moss, which I guess makes it a moss ball bonsai—the book has detailed instructions on creating your own. 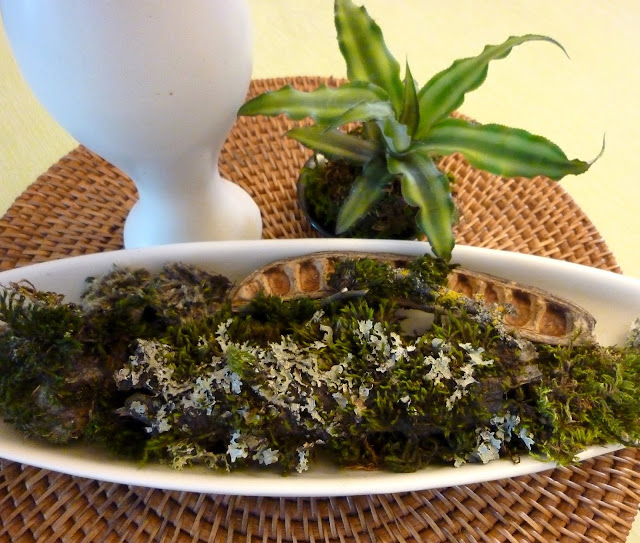 The different moss balls shown in Part 3: 100 Moss Balls to Try, run the gamut. I was excited to see an aloe and other succulents used, and after looking at the book Andrew is challenging me to make an agave moss ball. 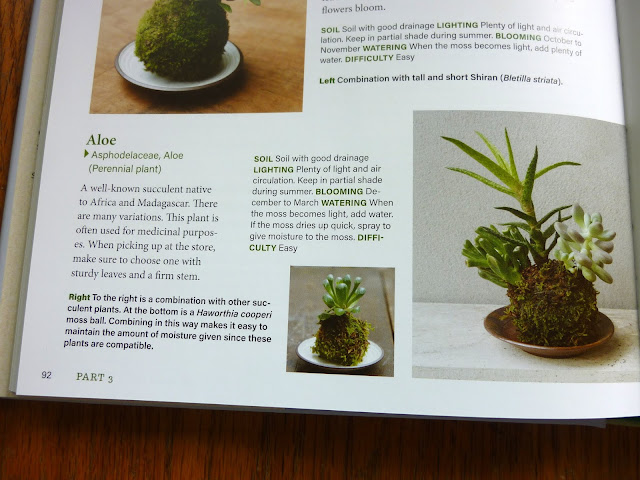 Plus there will definitely be a carnivorous moss ball in my future, probably a little nepenthes. 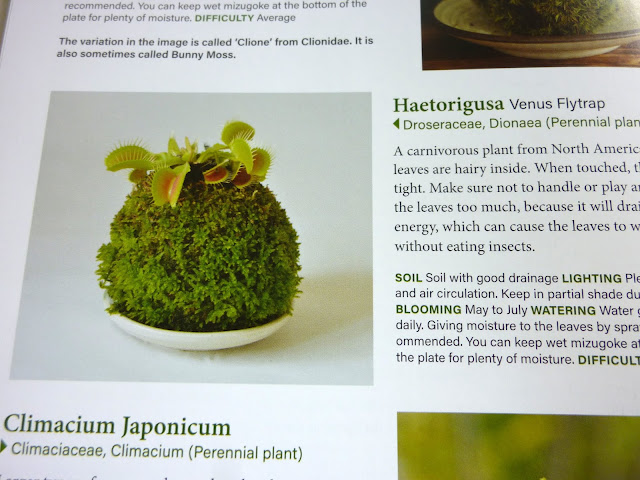 This small sansevieria on my mantle seems to be enjoying the treatment. As I've mentioned before, my version just involves shaping the existing root-ball into an orb and wrapping moss around it—I don't go as far as using a special soil mix. 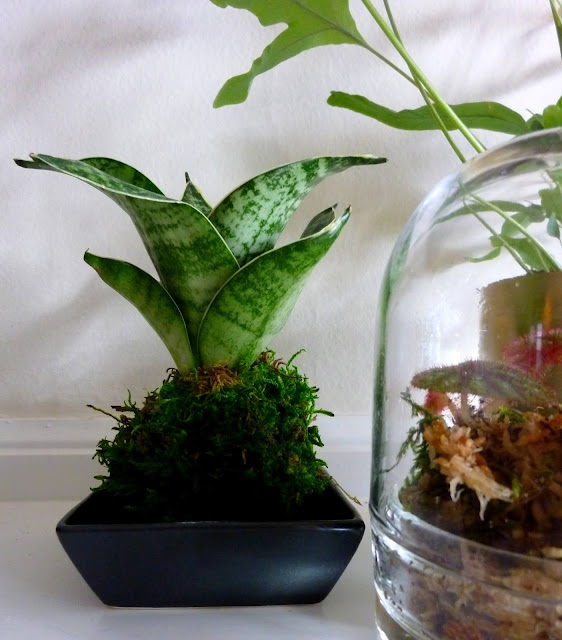 The roots of this begonia inside the glass dome are also wrapped in moss, and there's a piece of moss from a neighborhood walk tucked in there too. 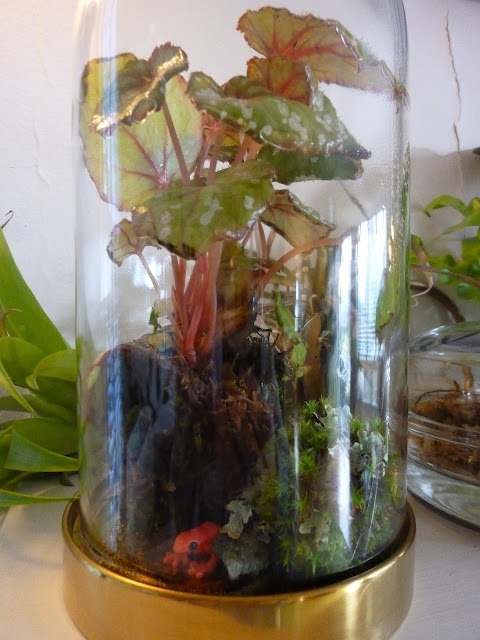 Oh and I finally got a tiny frog... 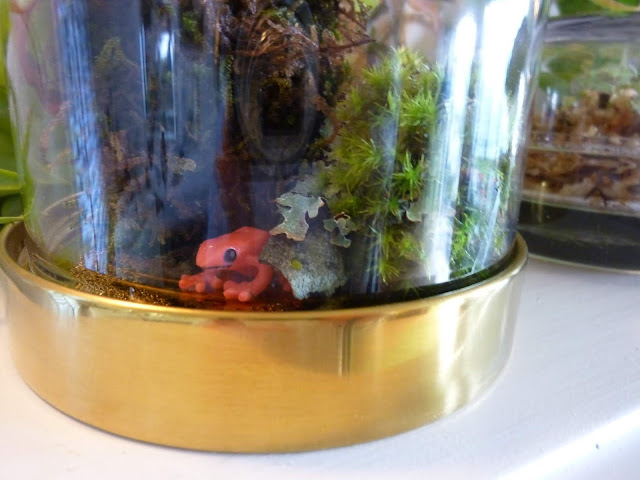 This strange decaying mess was an Adiantum venustum (Maidenhair fern) moss ball from Christmas 2018. Last spring I plopped them (there's a pair) into a bare spot in the garden, and then promptly forgot about them as the surrounding ferns grew around and hid them. 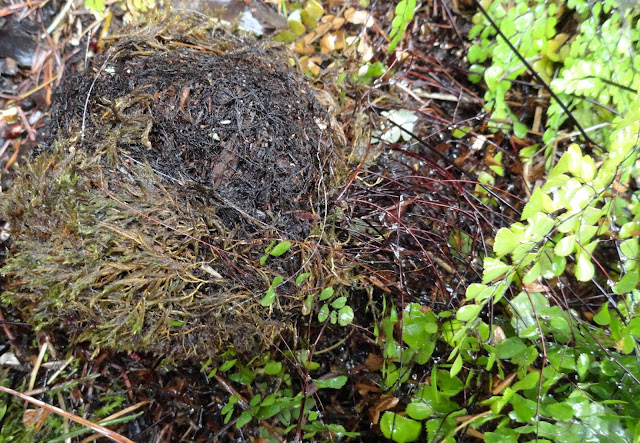 Winter has exposed them both, and interestingly they've rooted into the ground. I tried to pick them up but it isn't happening. It will be  interesting to see how long it takes them to fully disintegrate and then integrate into the garden soil (orange lines added to help you identify the bases and what fronds are connected to them). 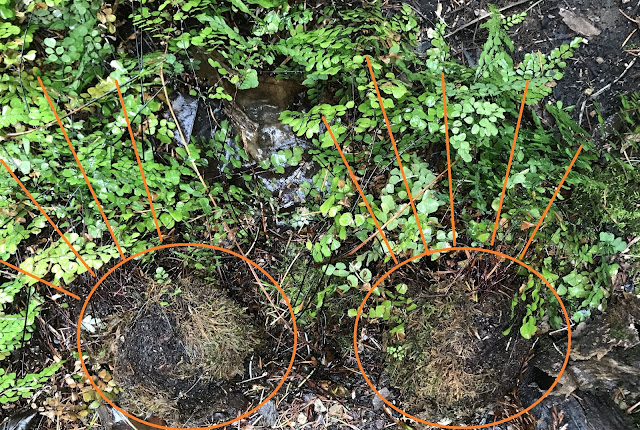 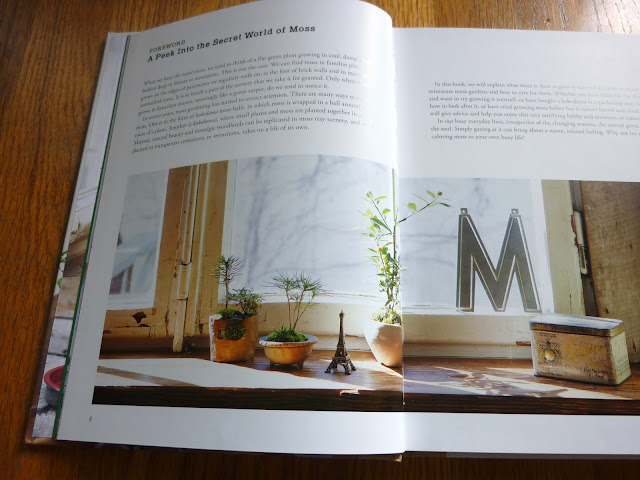 I enjoyed this one more than I thought I would, there were some fun projects on it's pages I'll be trying. I don't want to give them all away though! 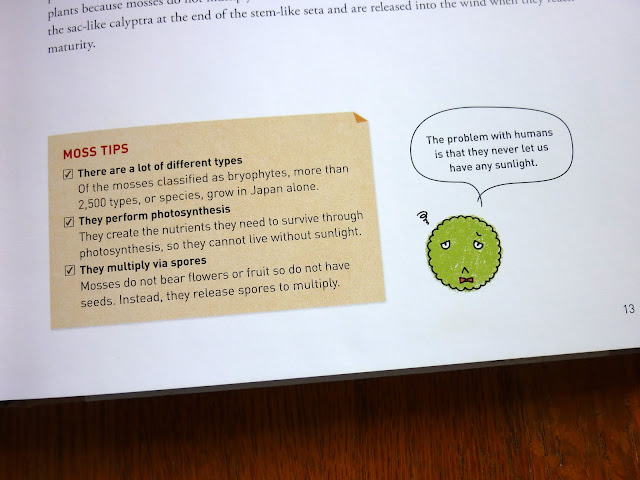 Both books had a section on finding mosses, a few times they veered dangerously close (in my opinion) to condoning harvesting in public and private places. Maybe that's just my paranoia after the story I shared about people stealing cuttings from nurseries. I suppose there may also be a distinct difference in the way the Japanese approach this sort of thing vs. the way Americans do (meaning they don't have that same entitled attitude that we seem to have adopted). 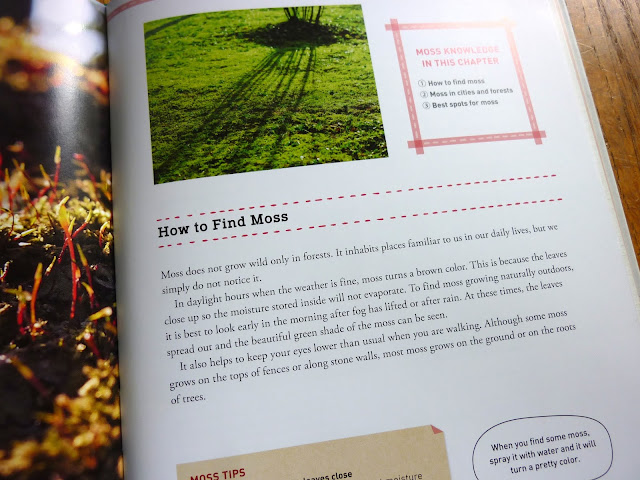 They gave many examples of where you can find moss... 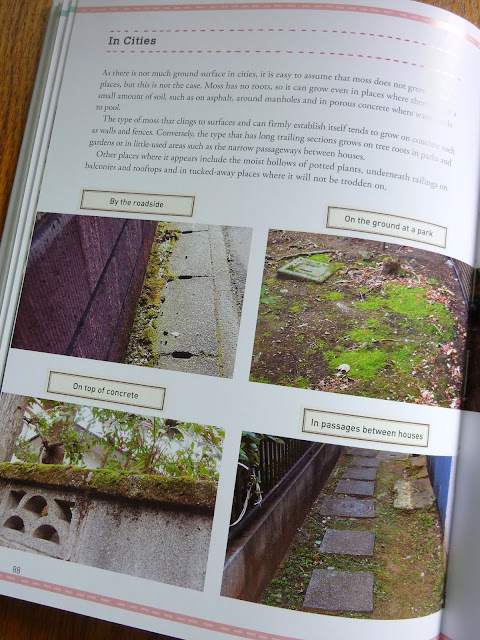 ...which isn't difficult to do this time of the year, in my part of the world. Here its growing on a wall dividing two front gardens on a street near me. 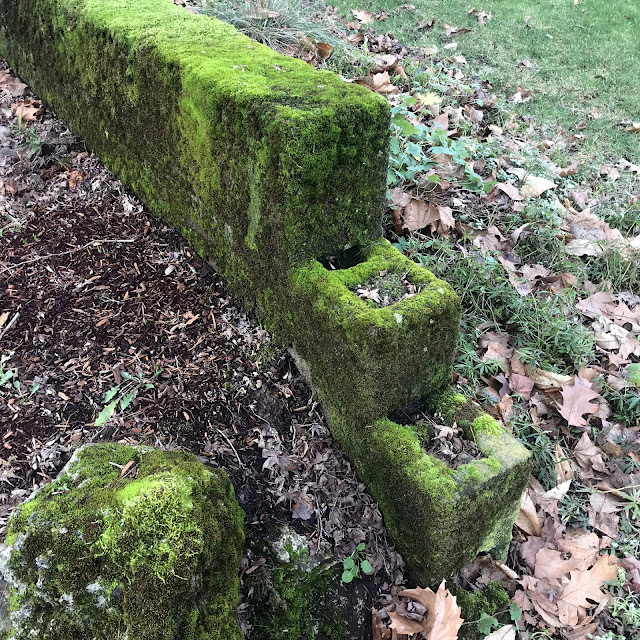 And here is a very mossy wall near McMenamins Kennedy School. 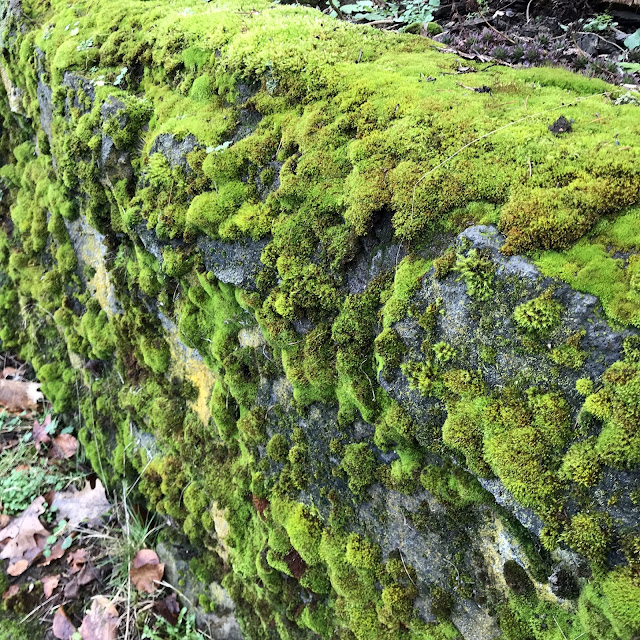 Seeing this moss near a fire-hydrant, and thinking of the stereotypical image of a dog peeing on a fire-hydrant, got me laughing. I wonder if the dogs are helping the moss grow? 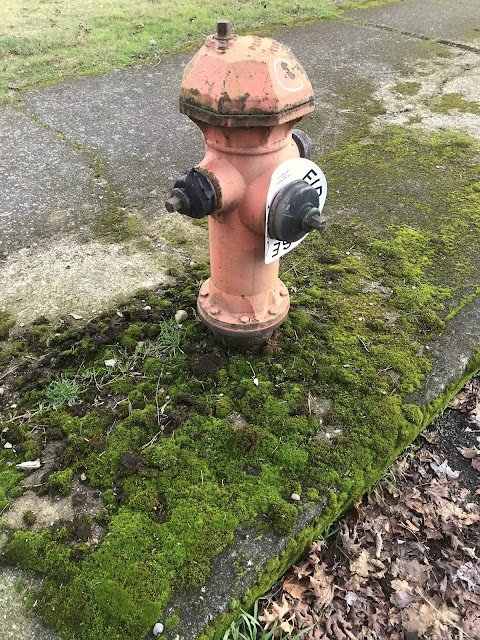 The books Moss Ball Bonsai and Miniature Moss Gardens were sent to me free of charge and I enjoyed them both very much. They are full of interesting projects, a glimpse into another culture, and lots of new-to-me information about moss.