In a Vase on Monday; time to prune the Edgeworthia

I couldn't help myself, I had to include a full wall shot because I am still so in love with that big Philodendron leaf print. I finally framed it a few weeks ago and fully intend to hang it on the dining room wall, I just haven't gotten around to it, yet... 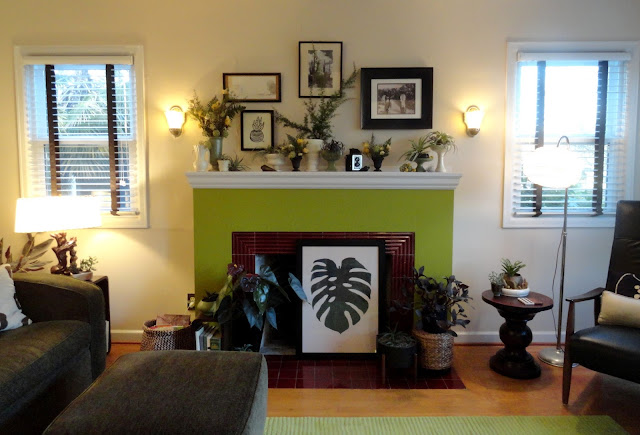 But the focus of this post is supposed to be on the vases. And vases I have, multiples in fact. I needed to prune the crossing branches on my Edegeworthia chrysantha 'Nanjing Gold', why not do it when the blooms are just starting to open? That way fragrant blossoms come indoors... 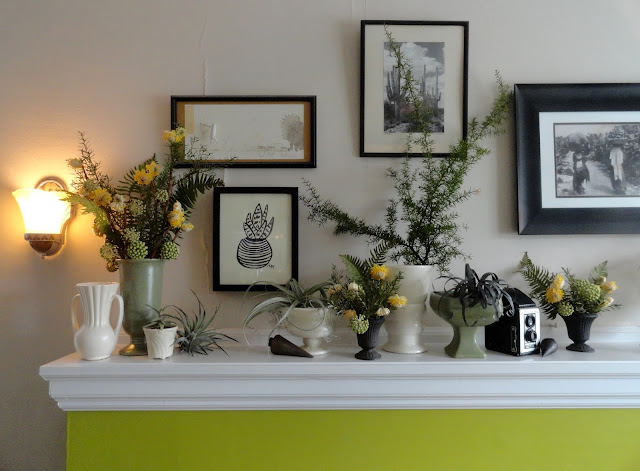 I know I did a similar vase post last year at this time, but I didn't let myself look at it. I didn't want to be influenced by what I included then, or feel bad about using the same elements again. Each vase includes bits of Edgeworthia, as well as Fatsia japonica seed heads, Grevillea australis branches, and fronds from my inherited Polystichum munitum (aka sword fern). 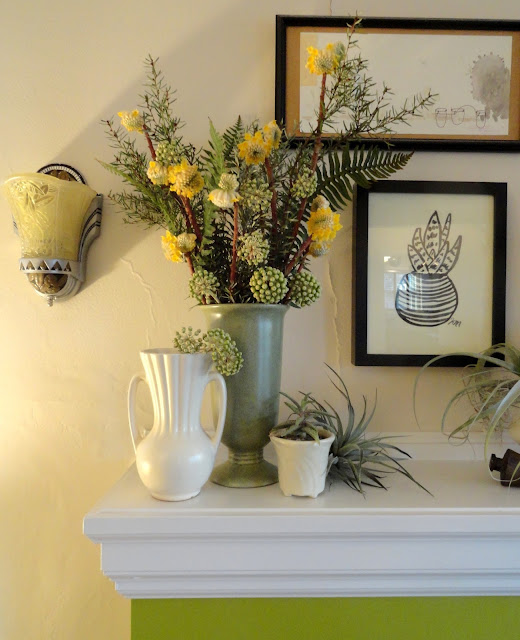 I bought the pair of small metal urns at The Gardener's Choice in Tigard, OR, last fall. Truth is they're just a light metal, probably aluminum. But their finish is so good they look to be much heavier. 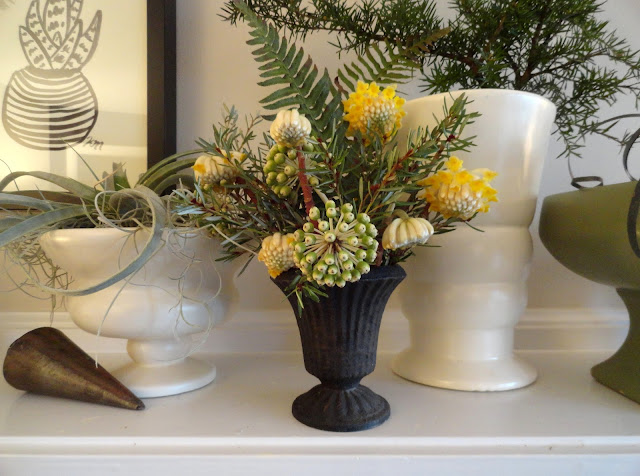 The tall white vase at the center is holding a branch of Grevillia juniperina ‘Molonglo’, which honestly, I expected to be dead after our winter temperatures, but it's not. Thus I need to start pruning back its enthusiasm. 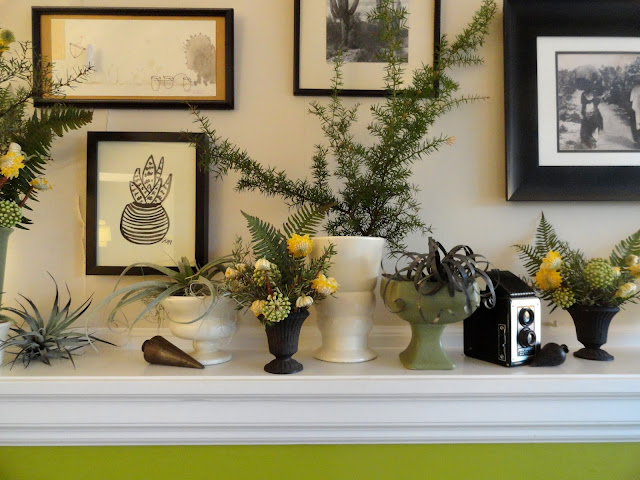 There are even blooms! 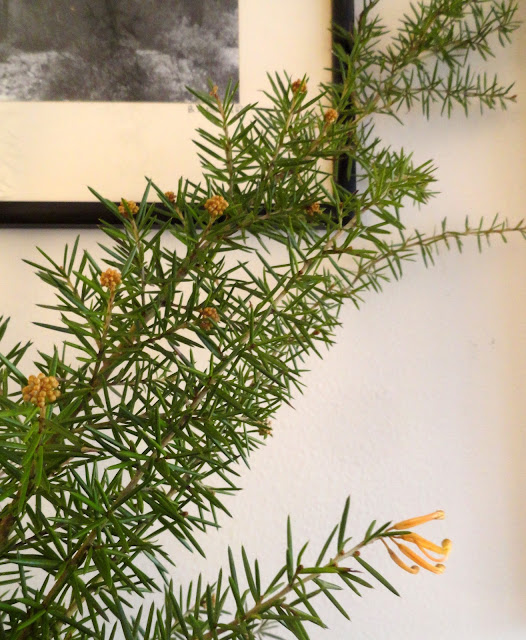 Did you spot the crazy metal curls? I don't know exactly what it's supposed to be, but I picked it up at a Digs Inside & Out half-off sale and I love it. 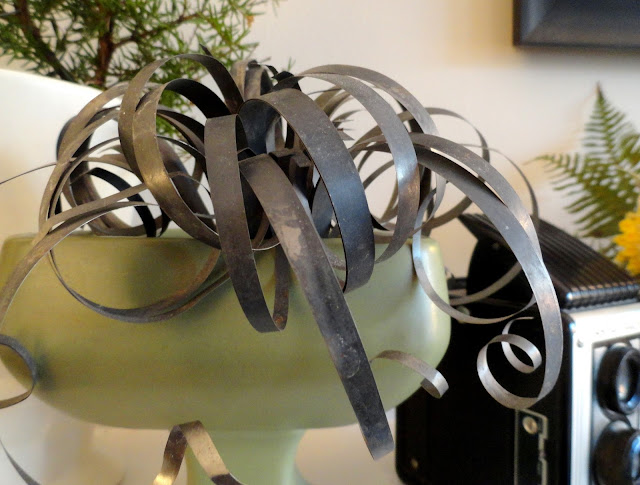 The camera is an old piece i picked up at a thrift shop years ago. I didn't think I'd ever used it in a mantle display before, but Andrew said something like "oh I see the camera and plumb bobs are back"... have you seen the plumb bobs before? I also thought they were new to the mantle. I was once obsessed and started a collection. Now I just have the three. Three is probably enough. 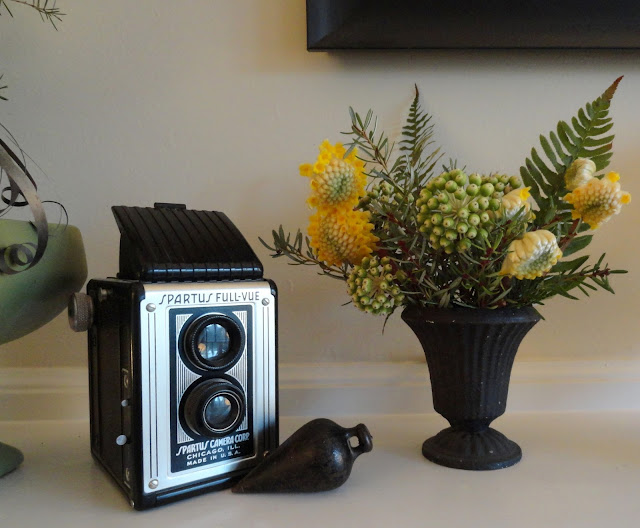 I know you've seen the Craspedia (aka billy balls — the yellow dots) before, they're oldies but goodies that come out ever so often. They carry the color theme to the end of the mantle. 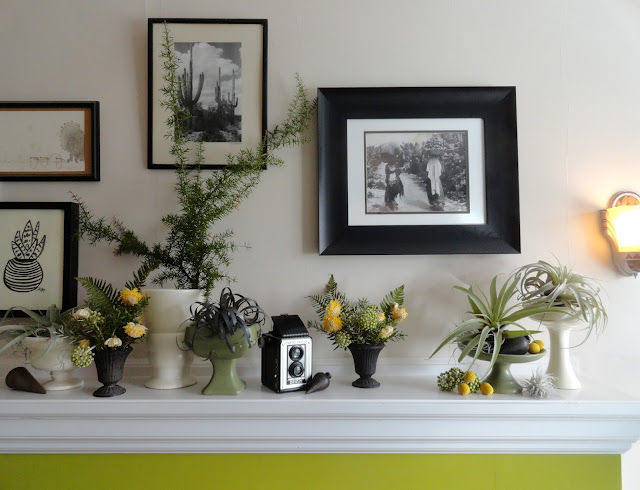 So, in case you don't know In a Vase on Monday is something we bloggers do, weekly — or whenever the mood strikes. The participating blog posts are curated by Cathy, who blogs at Rambling in the Garden. She's the one who started it all, join in the fun. Won't you? 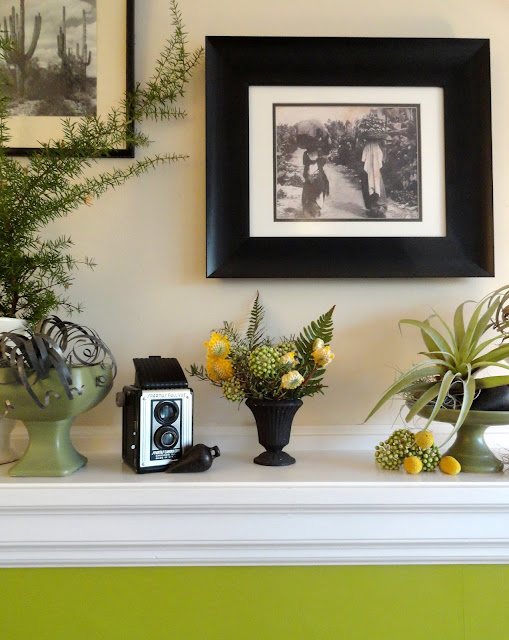