Decisions decisions! I thought about doing this month's "favorites" post about the plants that have surprised me, ones hanging-on, despite our horrid winter and early spring. But some of them are so pathetic looking, really they could still go either way. So instead...you get a look at the new plants I've brought home recently, as I realized there are quite a few I haven't shared here yet...

First off, this group came from a spur of the moment (as in "hey...I really should go buy some plants") trip to Portland Nursery. If it looks familiar that's because I previously posted this picture on Facebook. Clockwise starting with the big silver fern: Cheilanthes tomentosa (wooly lip fern), Aeonium 'Kiwi', Foeniculum vulgare 'Nigra' (bronze fennel), Raoulia australis, Leptinella squalida ‘Platt's Black’ and Athyrium filix-femina 'Limelight Lady' (plus yes, a second Raoulia australis)... 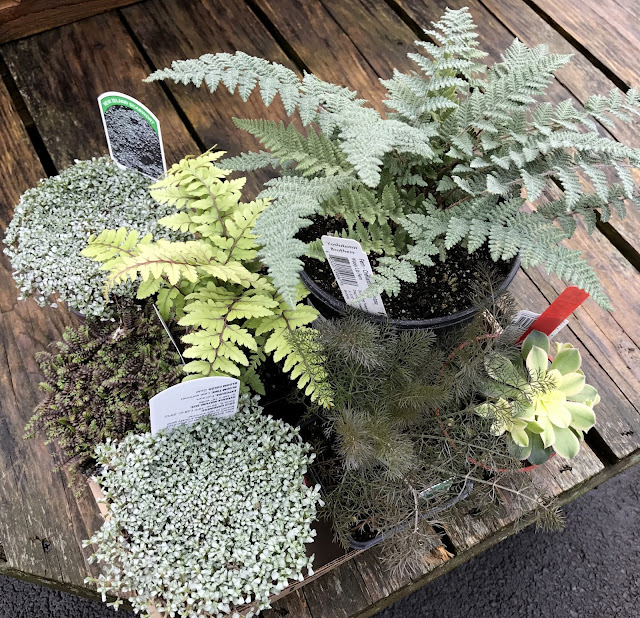 If you're curious to learn more about any of the plants in this post, click on the link in their name. I'm feeling too lazy to work the cultural info in here.

Another day, another trip to Portland Nursery (albeit a different location). This Calluna vulgaris 'Multicolor' became mine. I like how it looks a little like it's whirling. 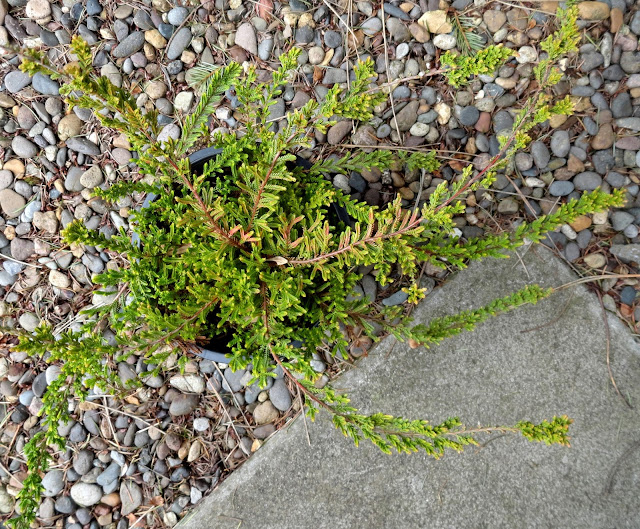 The bright green of the foliage made me happy too, plus it will eventually turn gold and later orange and red. A plant of many colors. 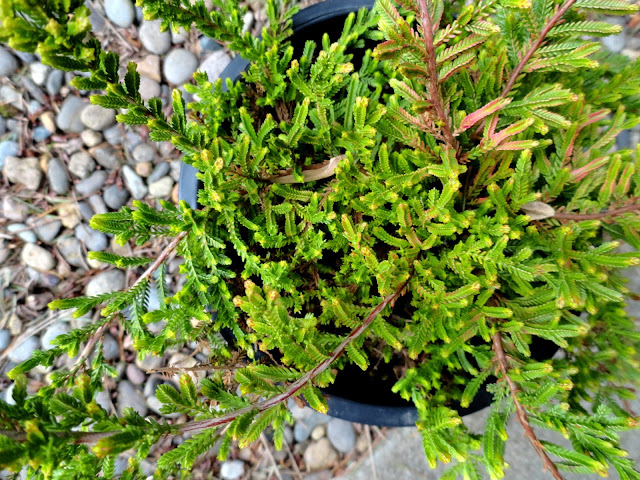 I mentioned these little guys in this post, but I don't think I admitted that I bought a pair (that Podophyllum tucked in the stock tank was a NWFG Show purchase). 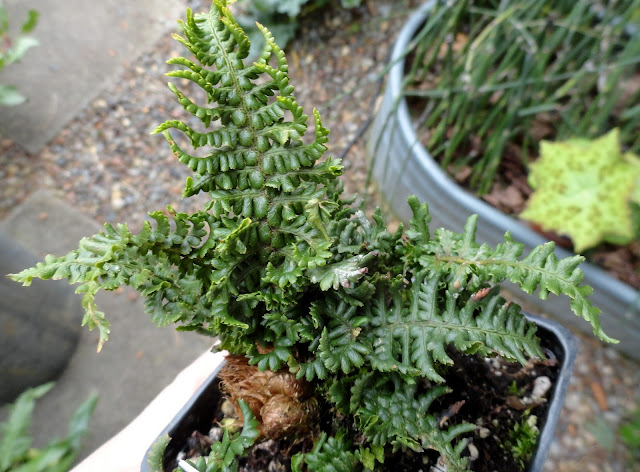 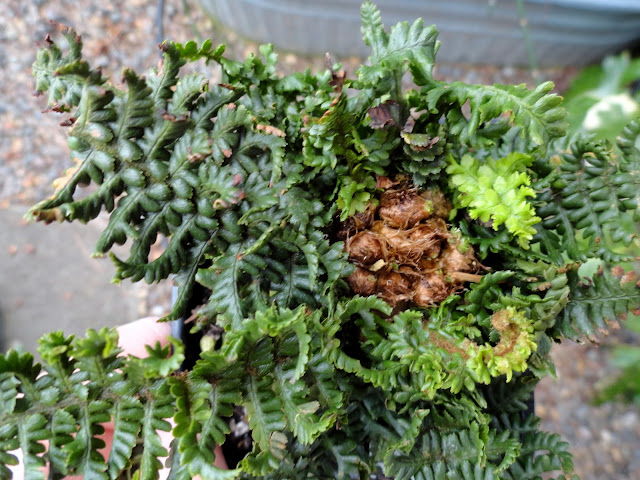 I'd purchased one of these Agave utahensis v. eborispina at 'Digs on Alberta' awhile back, but thanks to their 50%-off sale last weekend, I now have two more. 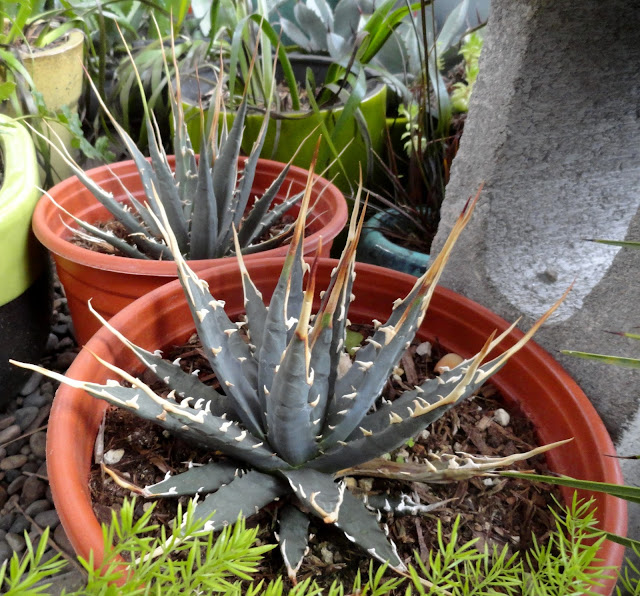 I made a trip to Cistus a few weeks ago, specifically to get this vine, Akebia longeracemosa 'Victor's Secret'. 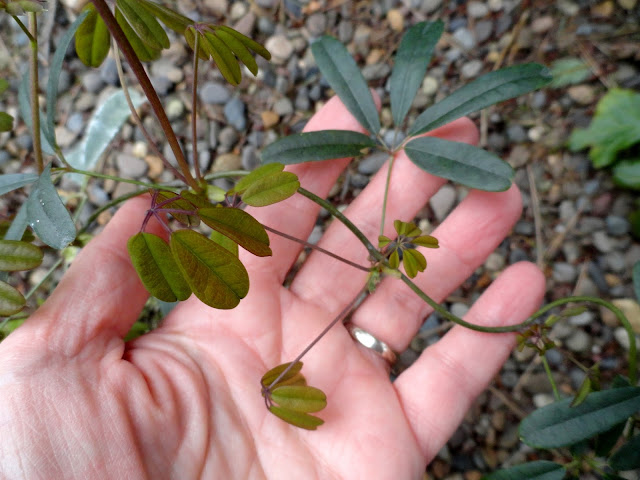 Completely ridiculous name, but check out the flowers - here. And aren't the new leaves the cutest? Like a little koala-bear paw. 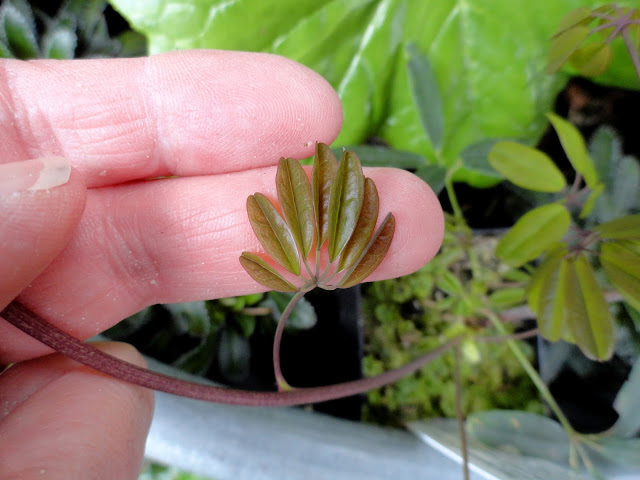 Because, you know, I have so much experience with koala-bear paws. 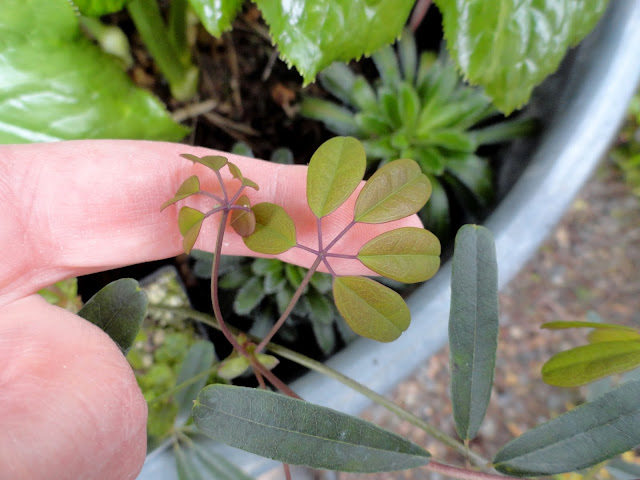 I also grabbed another Astelia nivicola 'Red Devil', because the two I have did marvelously over the winter. 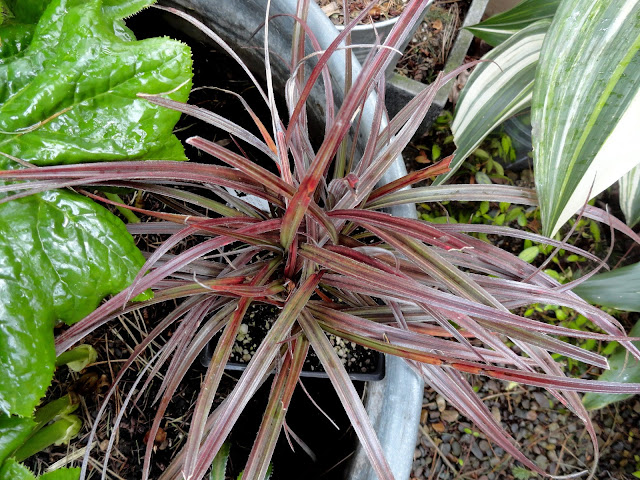 And a 4" container with two Dasylirion wheeleri in it. Beacause I LOVE THEM. 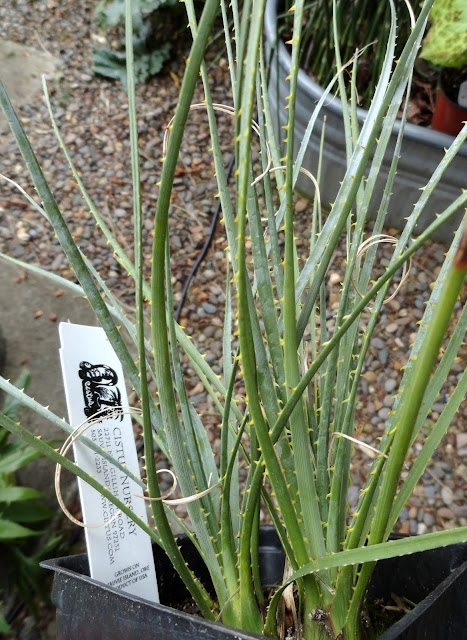 It's already doing that curl at the end of the leaf thing! 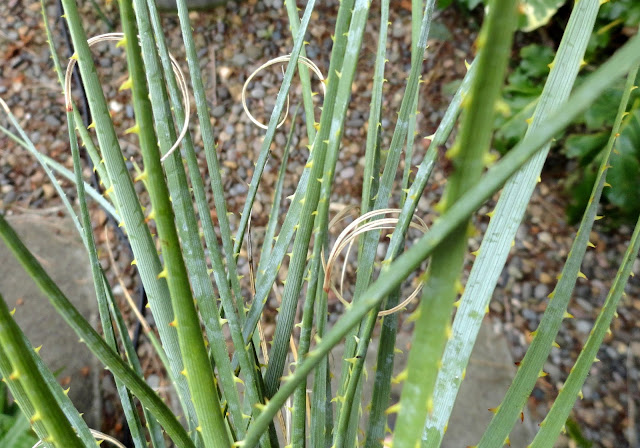 The same trip to Cistus had me nabbing this Protea cynaroides (aka King Protea). Why? Well for no other reason than I am still sad about my winter loses and felt like buying something extremely ridiculous and decadent. So there. 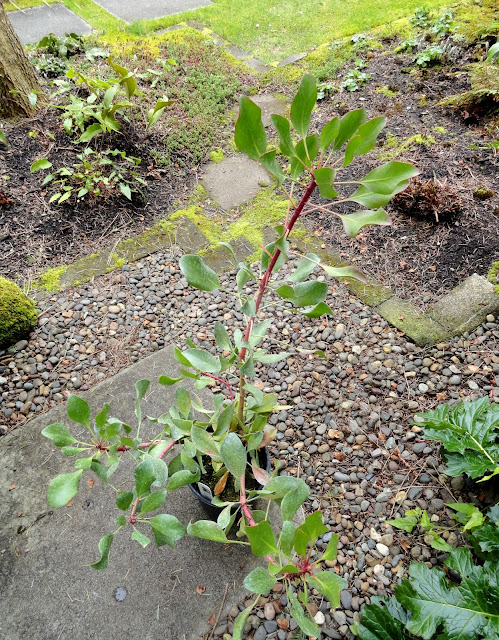 Yes it will spend life in a (big) container. No it probably won't ever bloom. Que sera, sera. 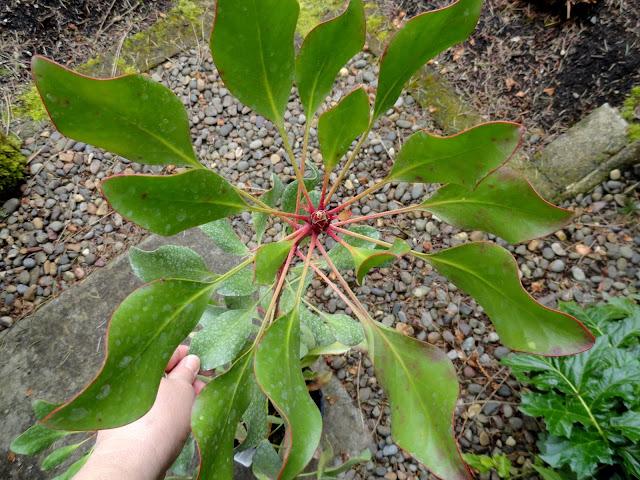 Of course there are more spikes, Opuntia ennacea 'Browse Cherry'. 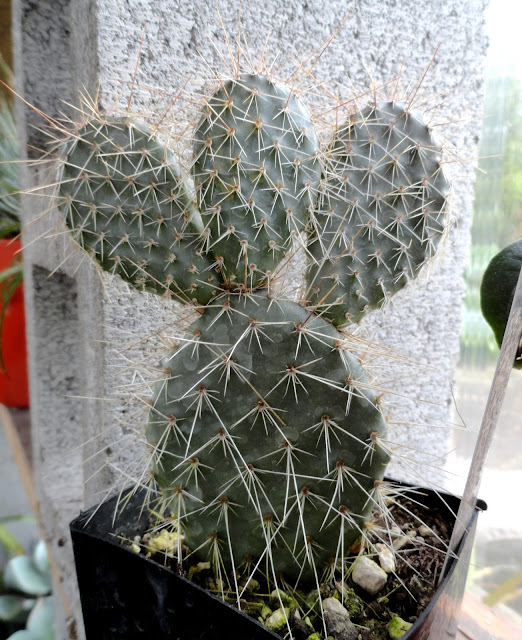 Andrew and I made a return trip to Cistus last weekend to be part of a work party, helping to clean-up winter's destruction in their display gardens. All who helped out were all gifted a couple of plants and this blurry stick is my biggest prize of the day. I am SO EXCITED. 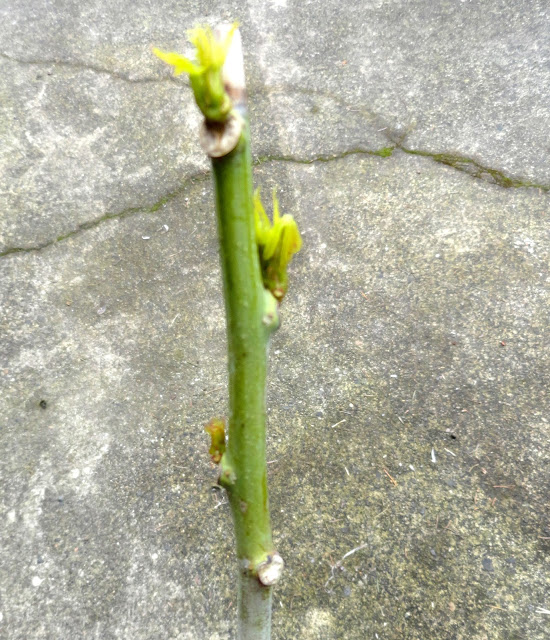 Why? Well because it will become this, Manihot grahamii. I took this photo on a Cistus visit in 2010. I should have grabbed it then, because this plant has eluded my grasp ever since. I can't believe I've finally got it! 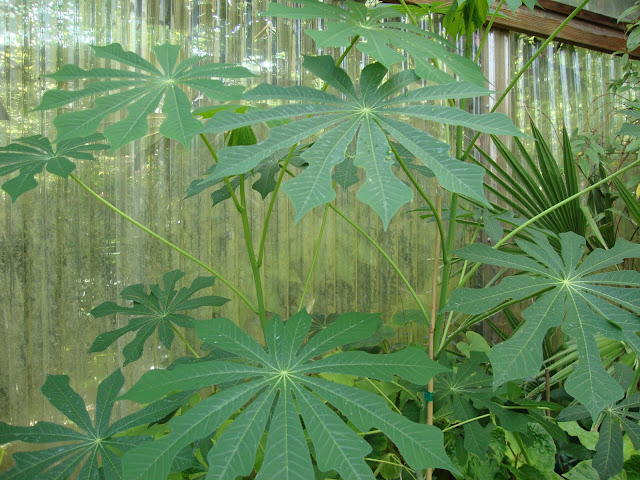 We'll end with Euphorbia stygiana (becasue those leaves!!!), I grew one a few years back, which I lost to a harsh winter, I felt like having it again. I also bought a Yucca linearifolia at Cistus that day, but neglected to take a photo of it. Oh well. Now hopefully it will stop raining every single day, so I can start planting... 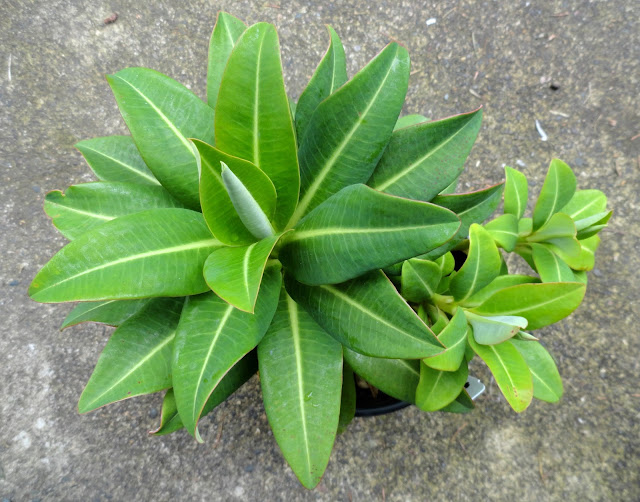 So what have you bought this gardening season? Or...maybe you're holding off, not yet buying, simply admiring what you've already got? Either way, tell us about it!