My new garden bulletin board – part of the Aeonium Challenge

I love a garden project, especially when it gives me a new place to put plants! Let's look at the "parts" that make up this whole... 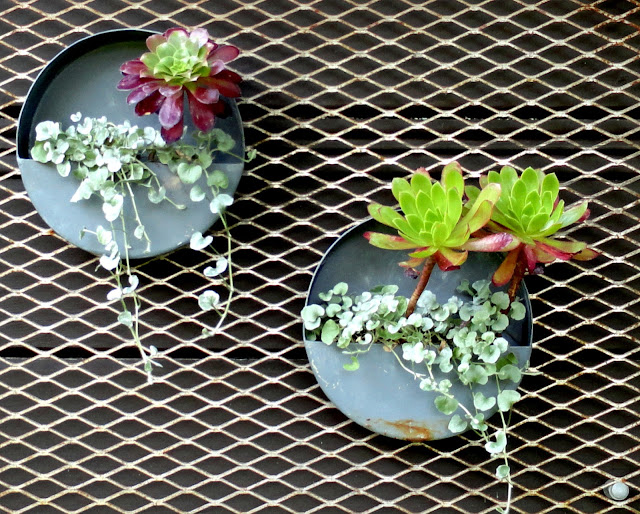 Part 1: I first fell for these round disc planters when I visited Sky Nursery north of Seattle – but they were expensive so I didn't make the purchase. 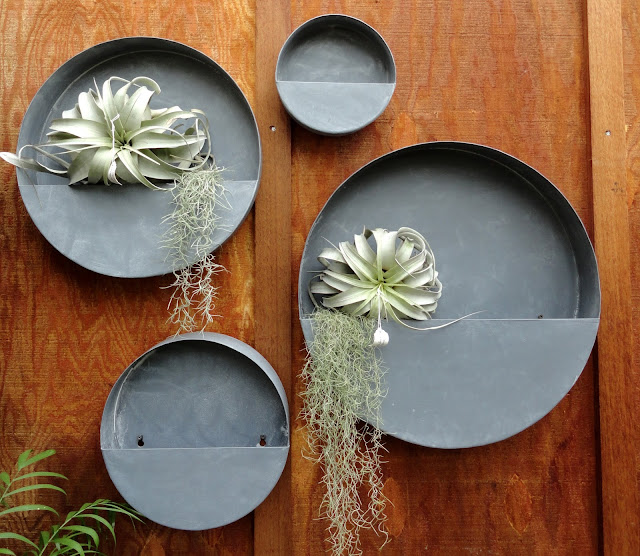 Then last fall Cornell Farms had a sale! I ended up with two of the smaller ones, or maybe they're actually the next size up – I've lost track. 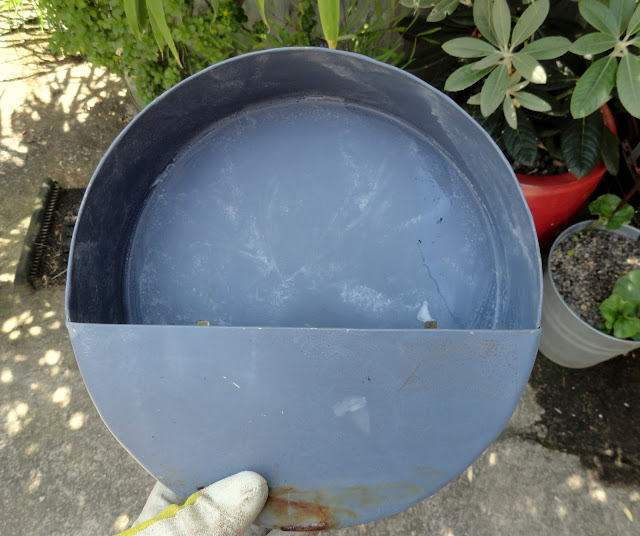 Part 2: Do you remember this piece of expanded metal I picked up at Earthwise Salvage? I had no idea what I'd be doing with it when I made the purchase, but once I had the disc planters in my possession it became clear. After all I knew I wanted them to hang on the side of the house, but I also knew there was no way on earth Andrew would be up for putting holes in the siding. Somehow this was going to be my solution. 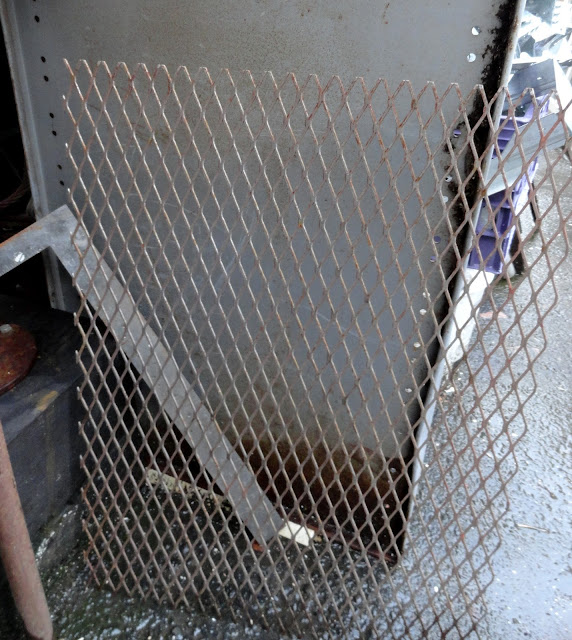 Part 3: Then when the Aeonium Challenge started kicking around in my head I finally knew what would be going in the planters. I bought 2 different kinds of Aeonium at Cistus. These are A. 'Blackbeard' – the other (shown below) is A. 'Embarcadero Red' (a Cistus introduction). A couple of Dichondra argentea 'Silver Falls' will complete the picture. 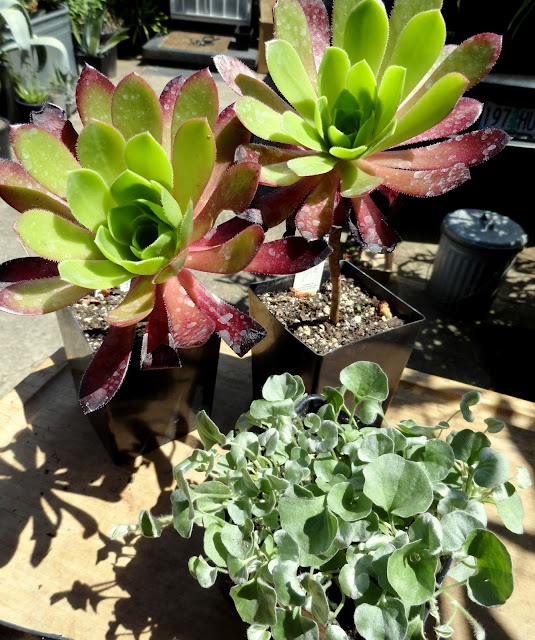 Part 4: It all comes together! Planted up and awaiting final placement. 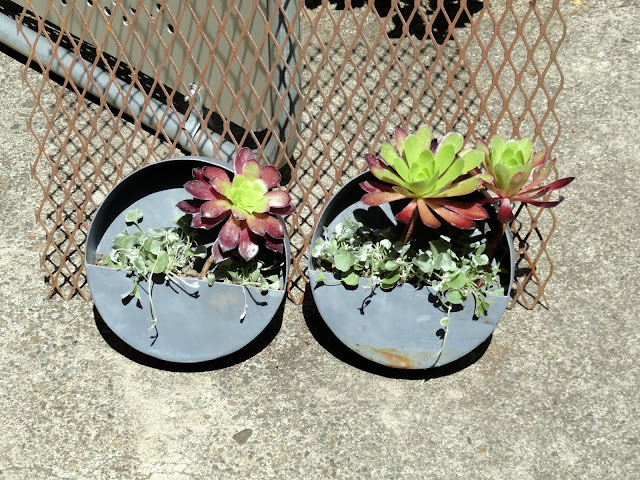 Oh ya, and that little issue of putting holes in the siding? Well there was a compromise. It turns out keeping the garage water-tight isn't as quite as important as the house – still behind each washer is a nice dollop of silicone. 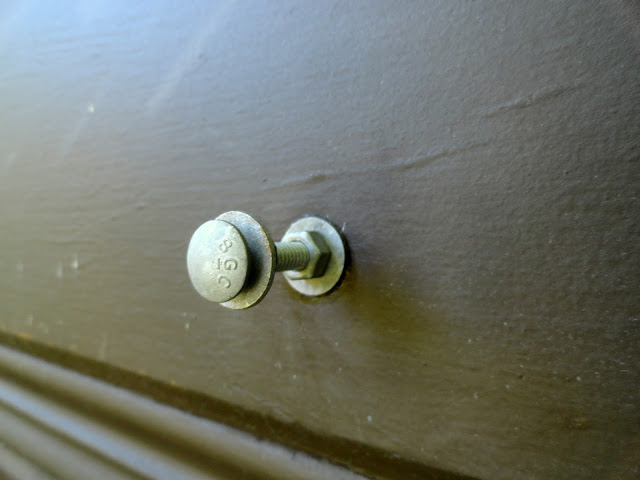 I wanted a mounting method that would allow me to easily remove the metal panel, Andrew came up with this solution. 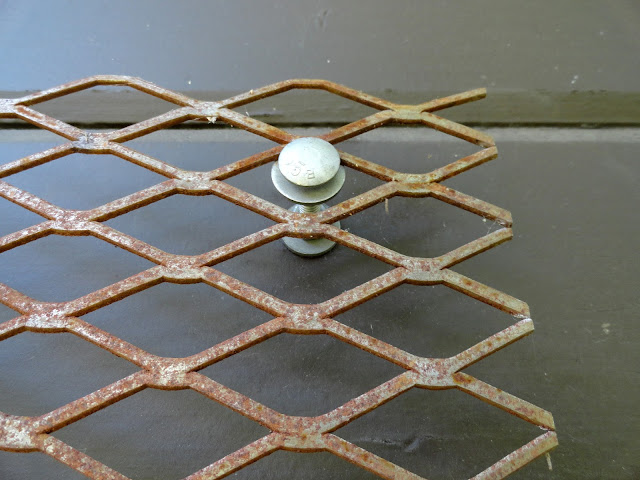 I think it rather handsome. 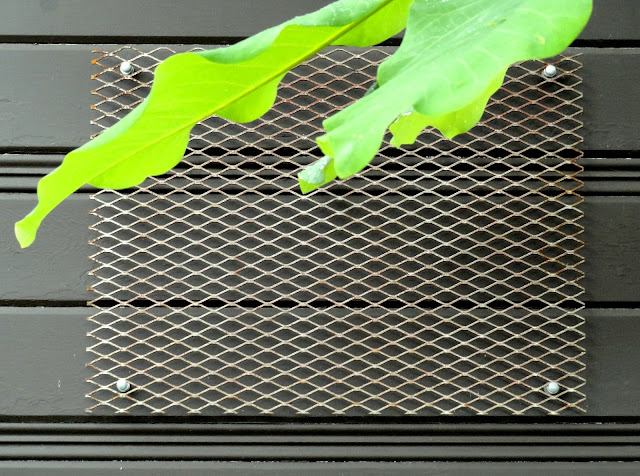 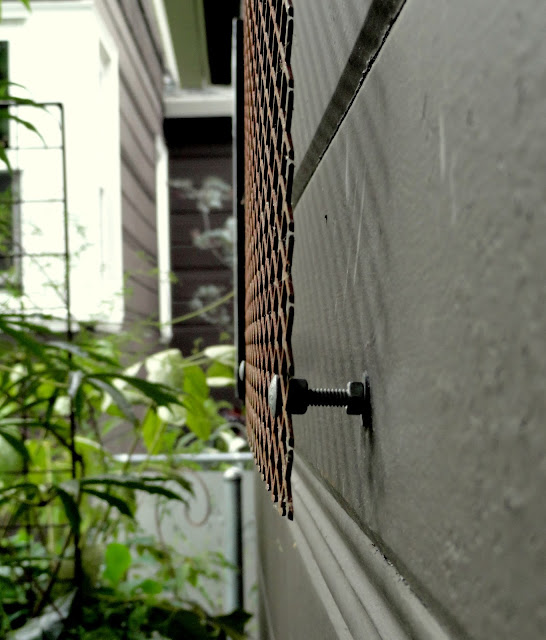 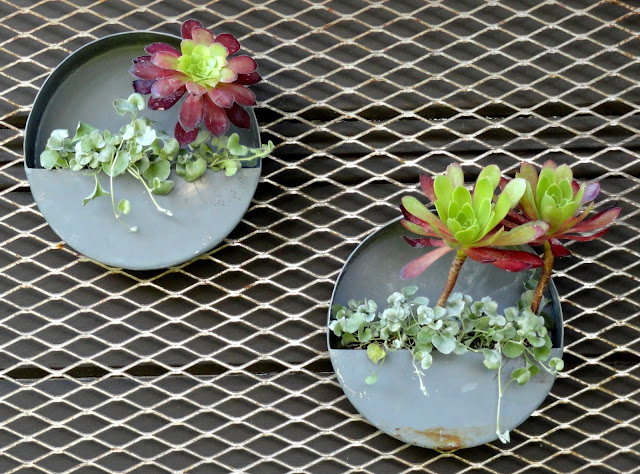 I also must credit him with designating this new addition the garden "bulletin board." The disc planters are just wired in place, so easily removed if I want to try something different (Tillandsia perhaps?)... 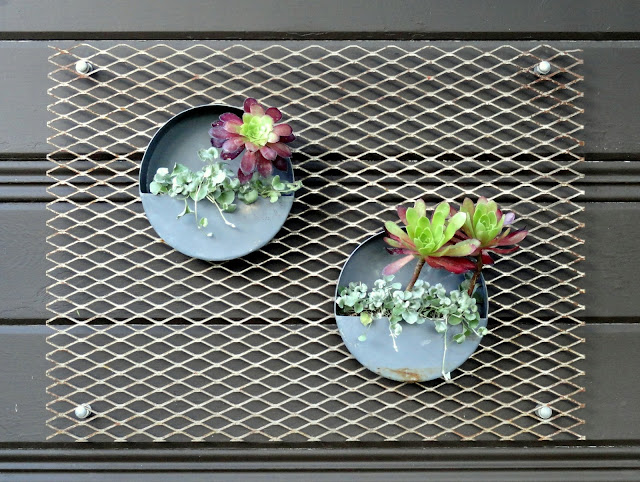 I love catching glimpses of it from around the garden. 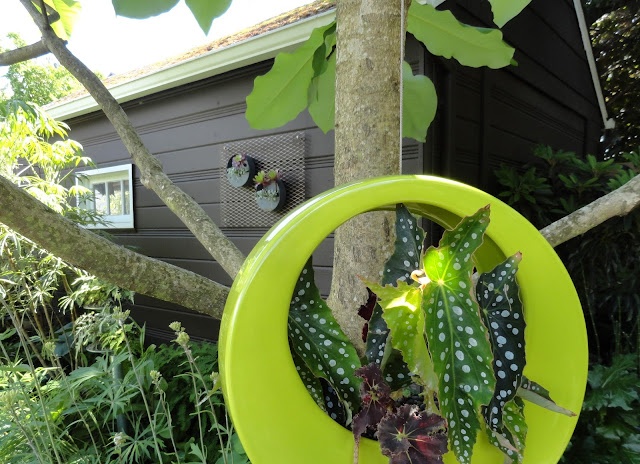 Although the shadow play makes getting a decent photo difficult. The colors look so flat here. 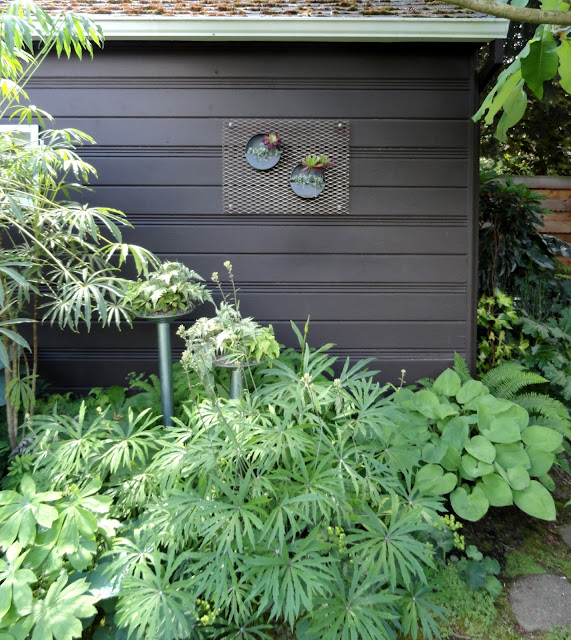 When really they're not. 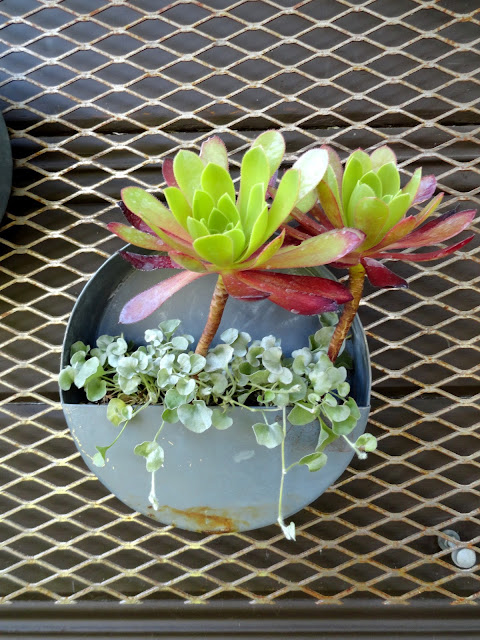 The Aeoniums get just about an hour of direct morning sunlight. Hopefully that's enough to keep them happy but still looking good in the heat of the summer. 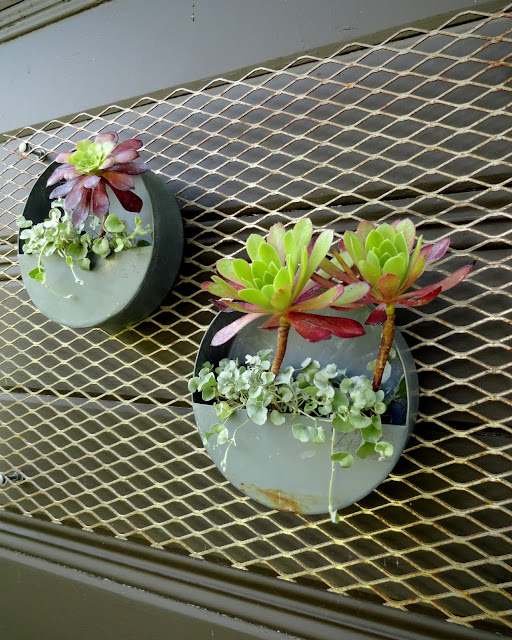 Two weeks after initial planting the Dichondra is starting to "fall"... 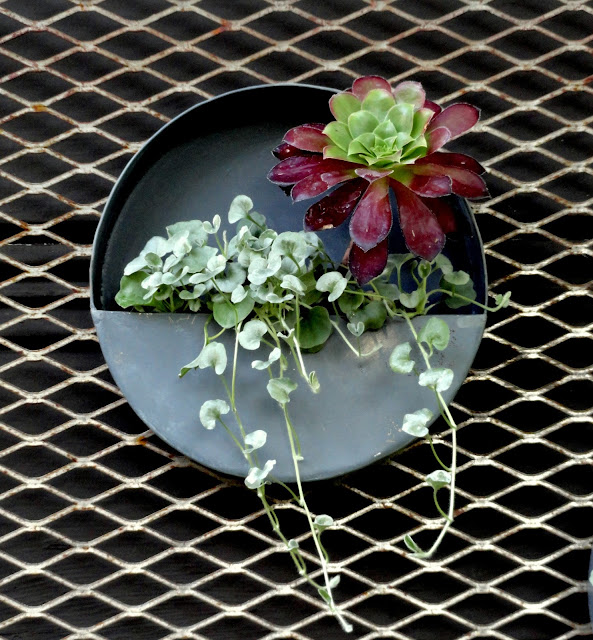 I do hope you're scheming on what to do to answer the Aeonium Challenge. To enter just send me an image of your Aeonium original by July 4th (spiky plants at gmail dot com). You could win an Aeonium collection from Cistus Nursery as well as have a lot of fun getting creative! 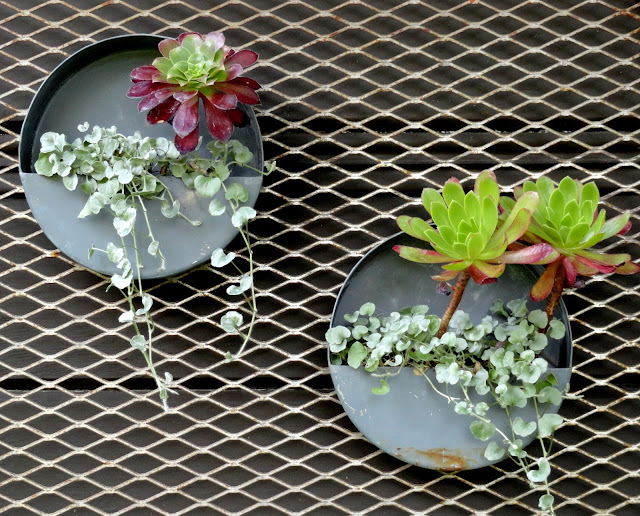