In a Vase on Monday, can I do blue?

Blue has never been a color I can cozy up to. I just don't get its appeal. 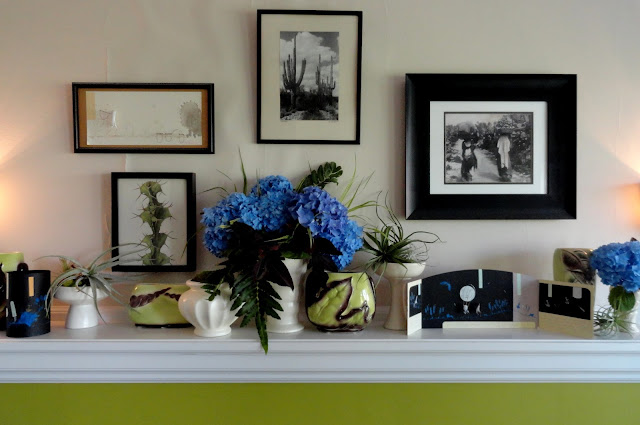 But since Andrew has been working on a new series of night pictures – which are largely deep blue paint on a black background – I decided to challenge myself to see if I could embrace that most cool of colors for this week's vase. 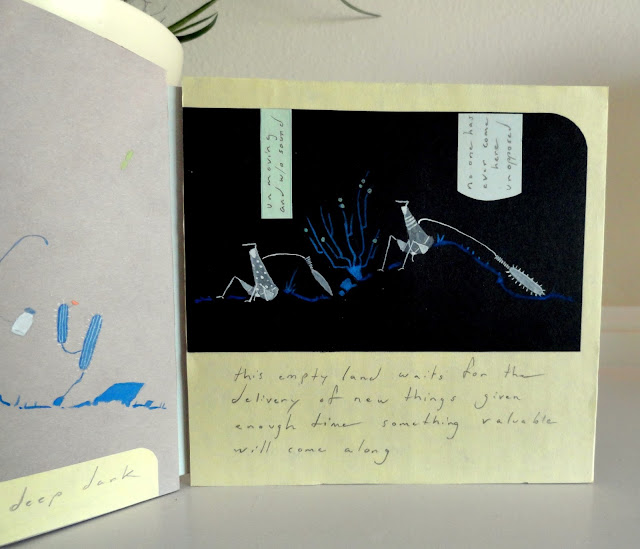 Oh that my Parahebe perfoliata was still blooming! But it's not. So I set out looking for something in blue. Finally I settled on the Hydrangea next to our driveway, technically belonging to the neighbor. However since I've kept them alive  (just barely) by watering them over the last few summers I do feel some sense of ownership. 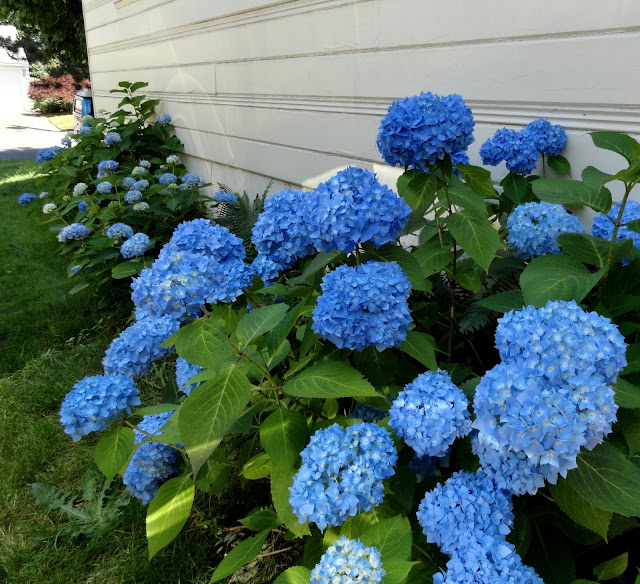 Cutting flowering branches I let a few drop to the ground intending on picking them up when I was done – that's when I saw the undersides of the leaves. Yuck! 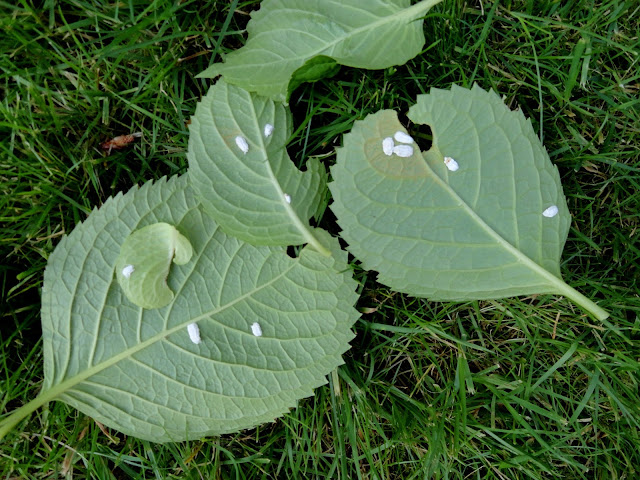 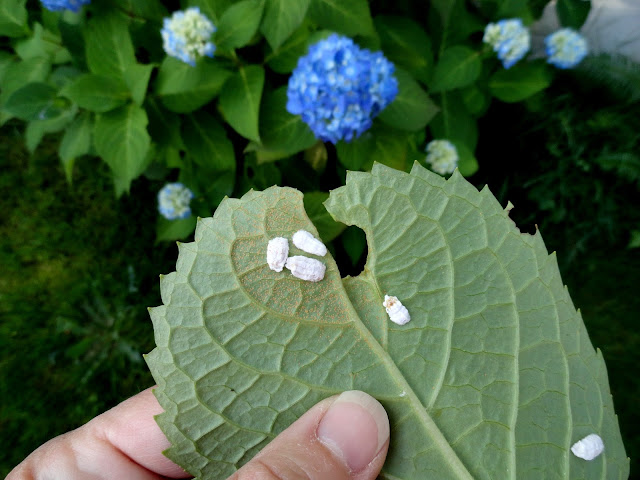 Hydrangea scale? Some websites say they might also attack Magnolias, that is not good. Not at all. 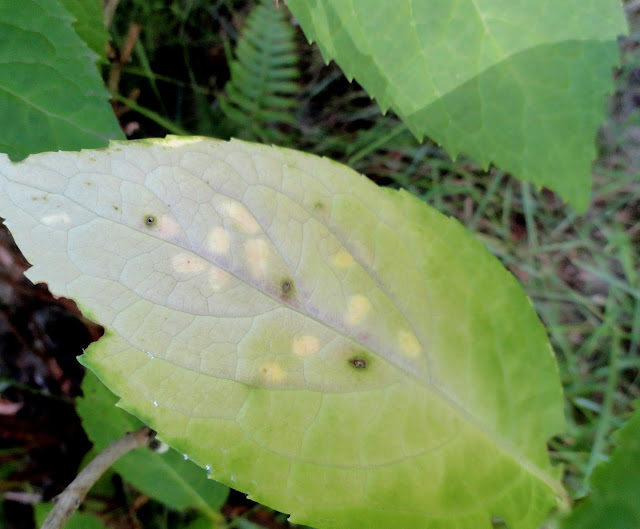 Determined I cleaned off the leaves and brought the blooms in side. 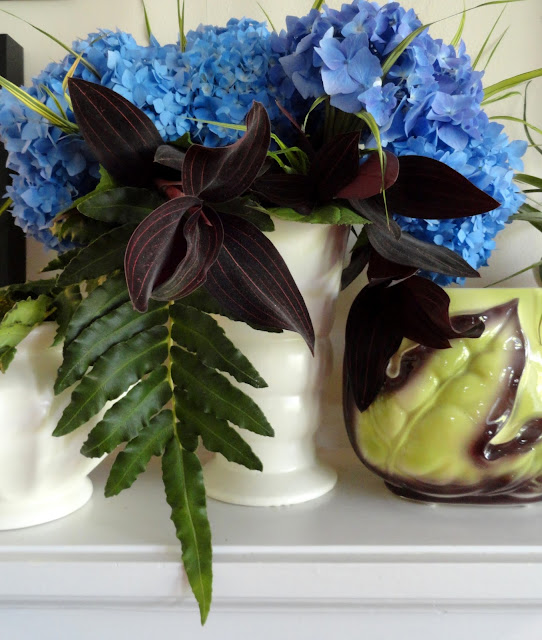 Joining them are a few fronds from a recently acquired Blechnum chilense. The stems were snapped part way down and rather than just toss 'em I worked them into the arrangement. 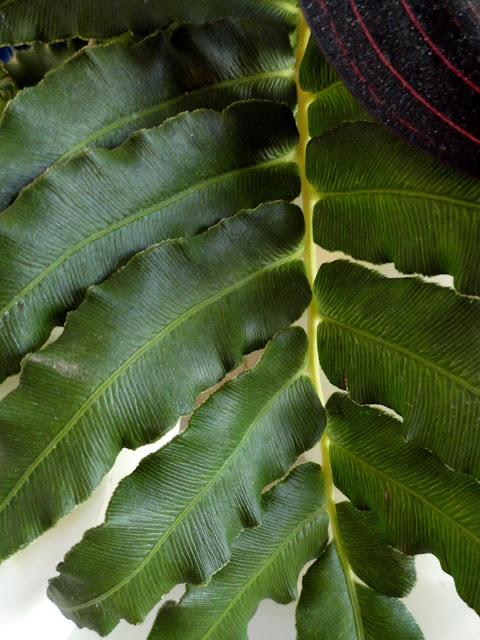 My Lucida discolor needed a little trimming, there were a few stems getting a little long. 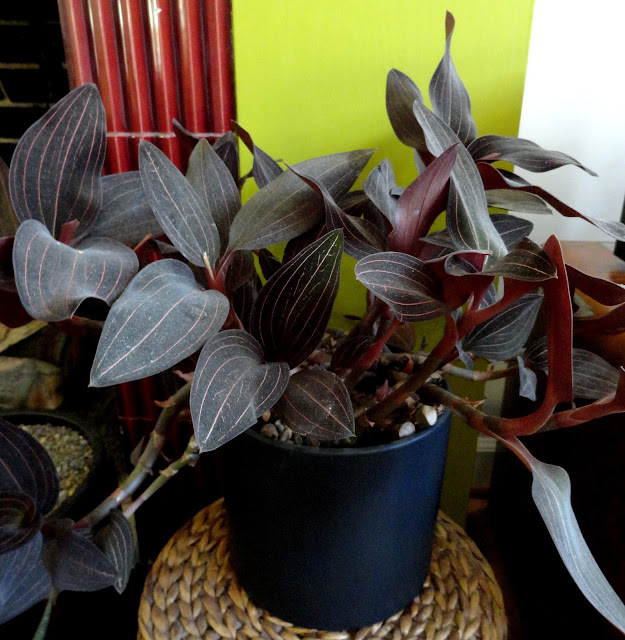 So into the vase(s) they went...where they'll root and I'll have new plants. 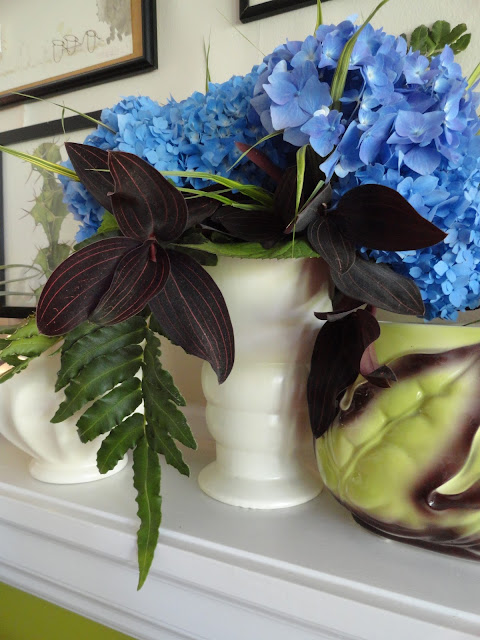 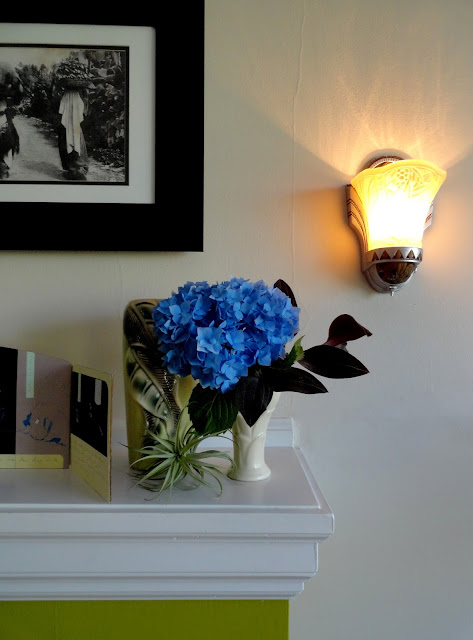 I don't usually appreciate these Hydrangea until later in the season, when their colors darken and purple starts to take center stage. 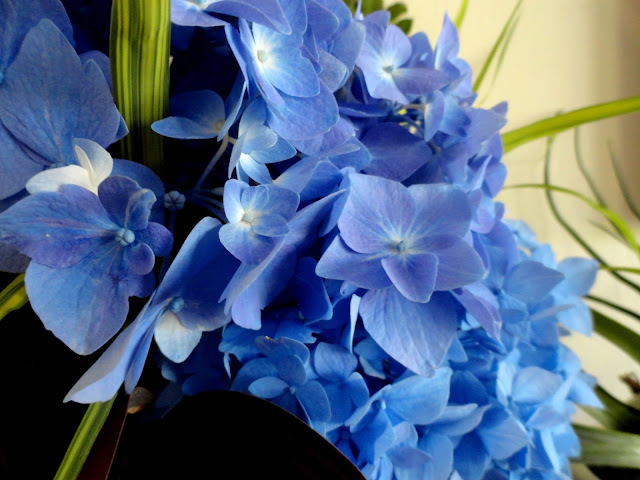 Blue cactus are featured in the new artwork. 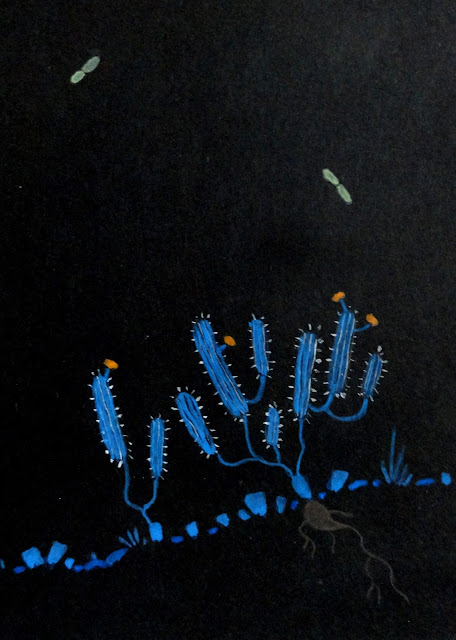 And more of the light bulb figures, here an early Edison bulb is joined by a female guide. 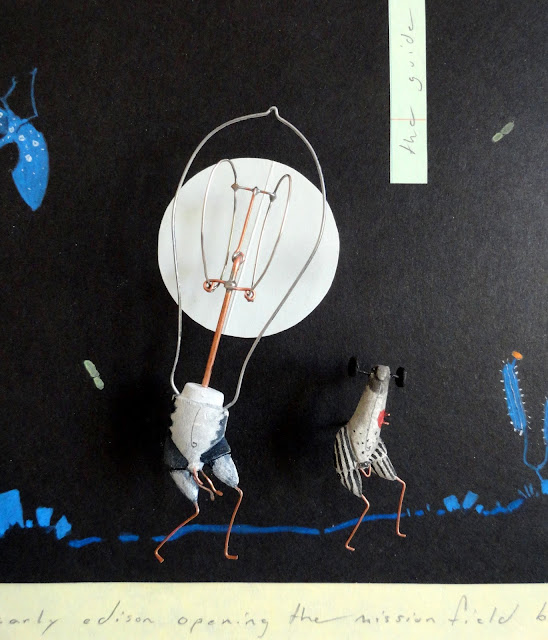 Another picture – another bulb and another guide... 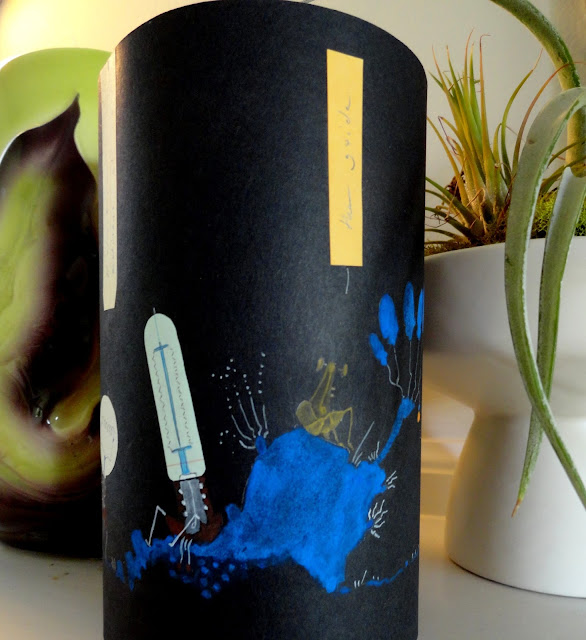 As for the arrangement I should note there are also a few sprigs of Hakonechloa macra 'Aureola' tucked in. Chartreuse is always a good thing. 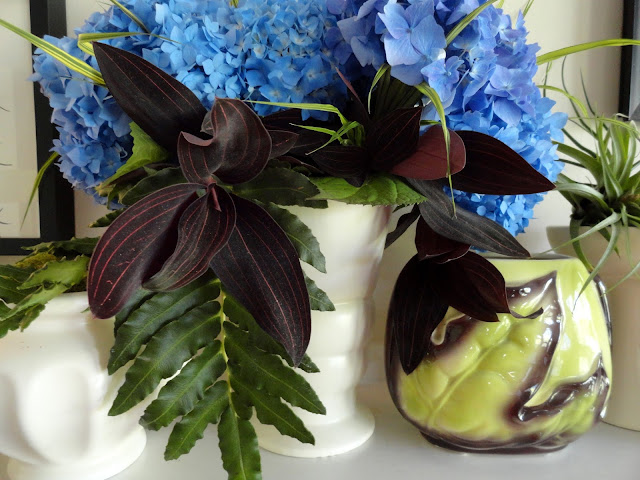 I'm not entirely at peace with the blue, it's still a little shocking...but it's growing on me. 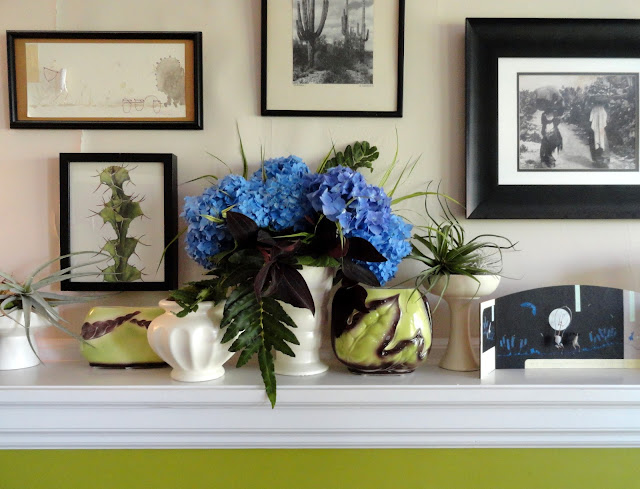 In a Vase on Monday is hosted by Cathy at Rambling in the Garden...check out the links! 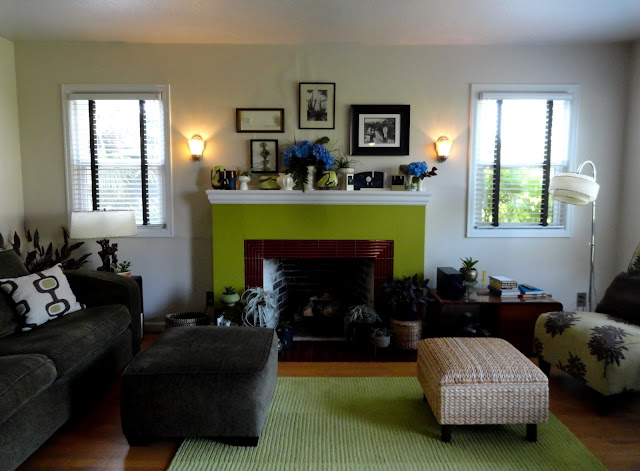