Some favorites for the end of October 2015

All year long this poor Phlebodium Pseudoaureum (Blue Rabbit's Foot Fern) has been largely ignored. Sure I watered it, but I failed to realize just how fabulous it was looking until moving things around after building the shade pavilion greenhouse. Somewhere along the line it's started sending out huge leaves. 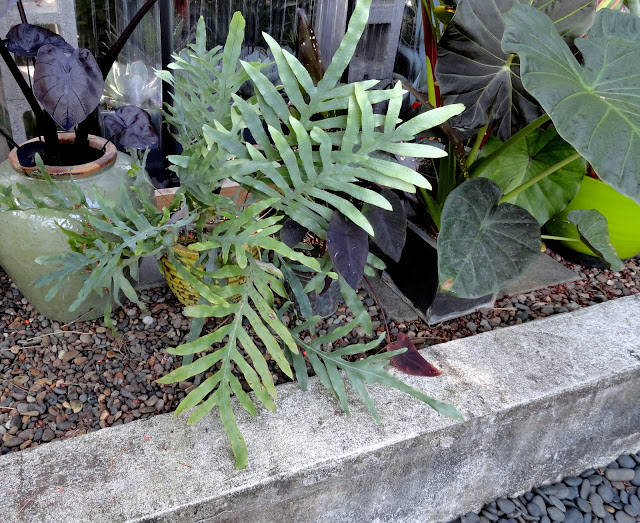 None of these photos accurately capture the powdery blue/green color of the leaves. It's subdued yet spectacular. 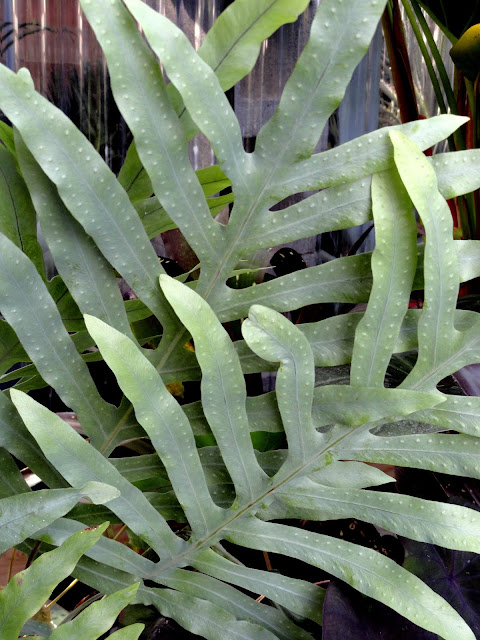 The creamy colored spores add to the beauty. 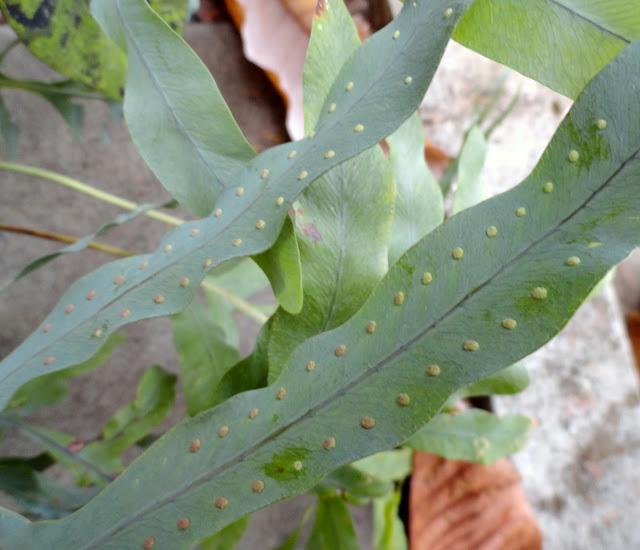 I remember when I first saw the fuzzy rhizomes I thought some small furry critter had died in the container. 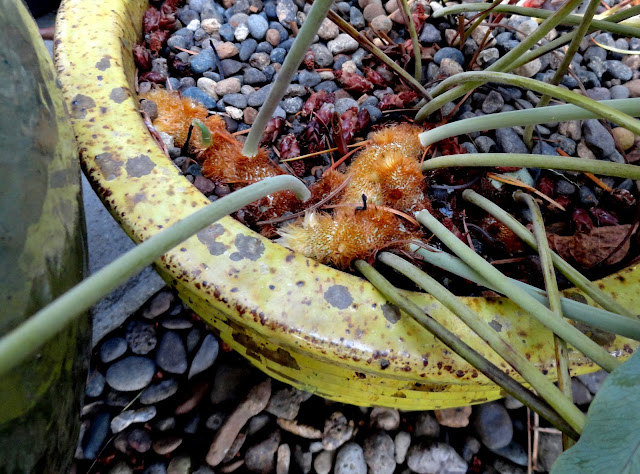 Although many sources list this fern as hardy to USDA Zone 8 I am here to tell you that's not necessarily the case. I've lost a couple in the ground. Only last year did I have one manage to live over and barely. Now in October it's finally managed to push out enough leaves to be noticeable. 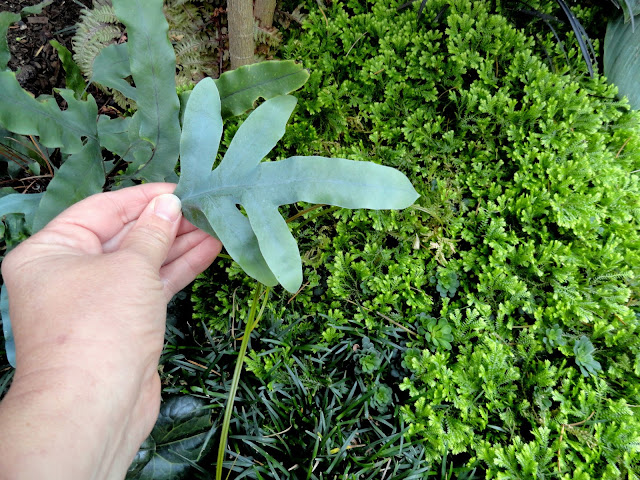 If you're in a USDA Zone 9 climate with a shady moist place to plant a nice glaucous leaved plant like this then do it! Otherwise keep it in a container where it can be protected as needed. 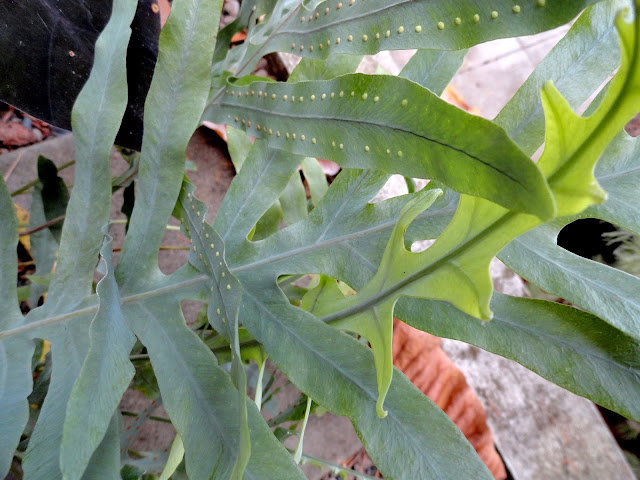 One last look at the fern as I call your attention to that orange container further down the wall... 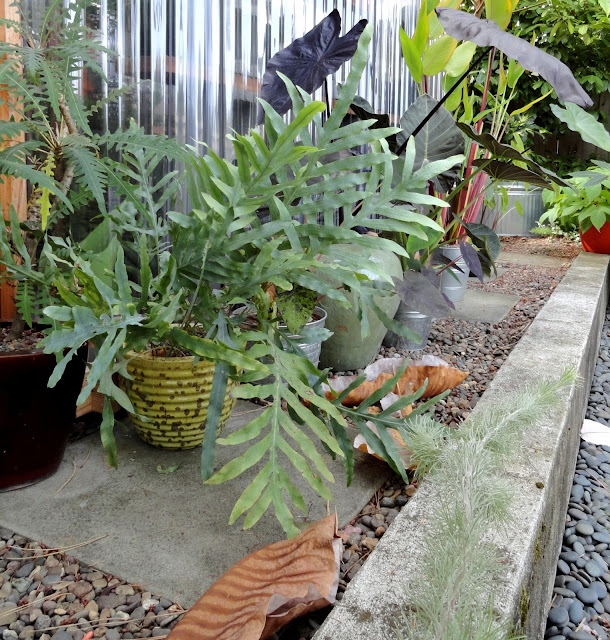 Aralia cordata 'Sun King' is my second fav this month. He's quite large since I bought him back in June. 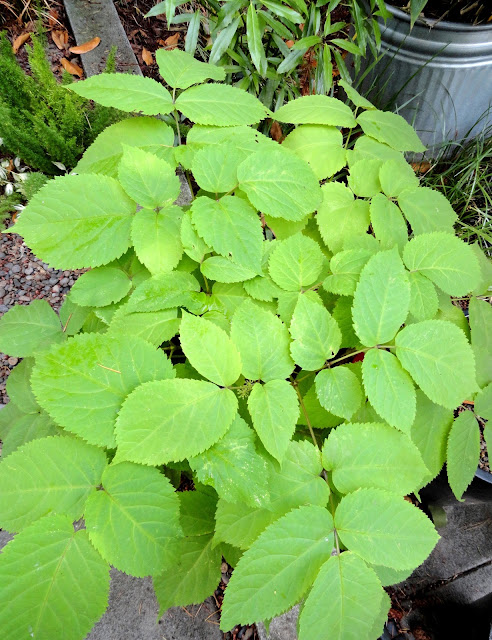 The light yellow-green color brought a nice brightening effect to a darkish corner, although he has "greened up" a lot in the last few weeks. 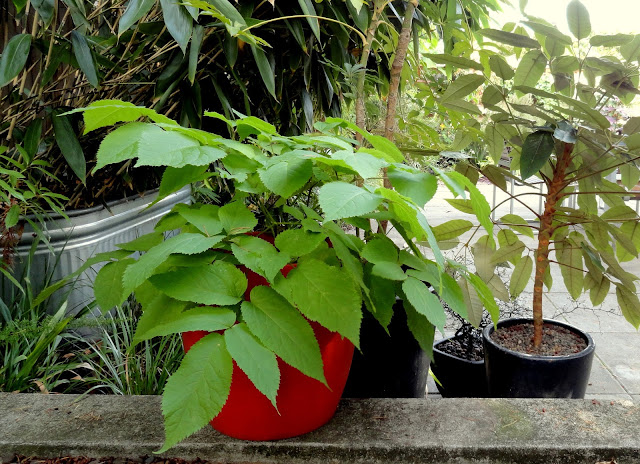 The golden tone had made him a perfect peek-a-boo backdrop to the Schefflera leaves (photo taken in August). 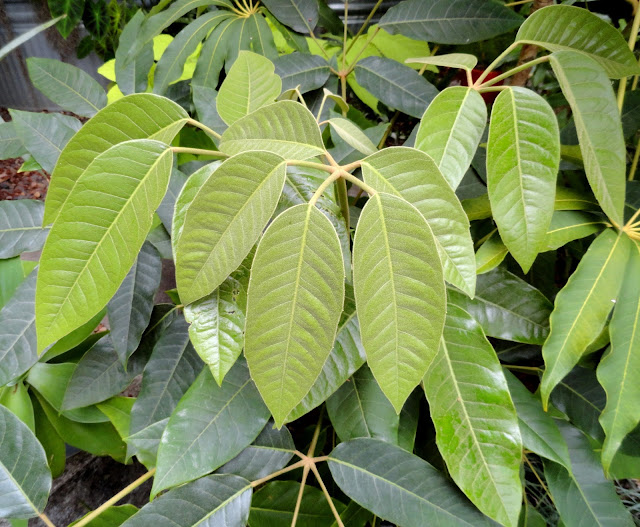 If I'm lucky those little blooms will develop into dark berries. 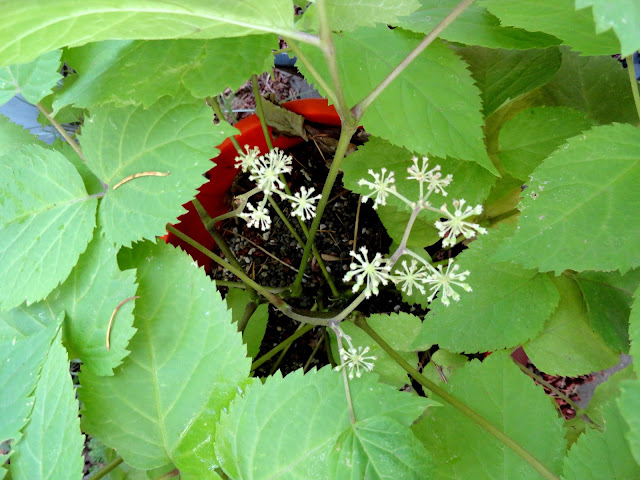 Hardy to USDA Zone 4 and eventually reaching 3ft x 3ft this shrub makes a great addition to a shady garden... 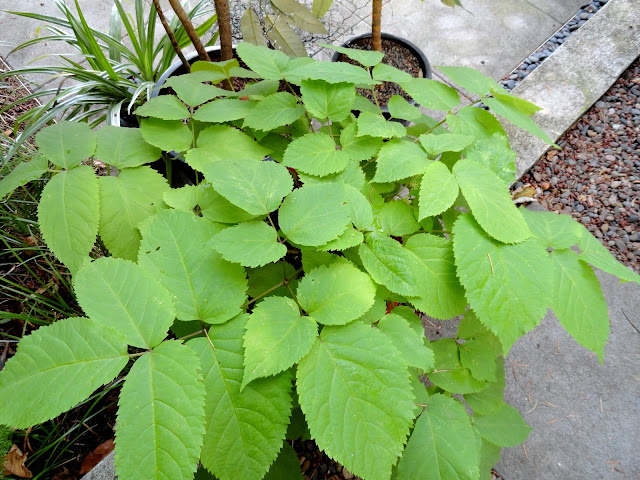 Now let's look at a couple of favorite plants in the ground...

When I planted out this Senecio articulatus in May it was only a couple of long, leafless, segments, now look at it! (ignore the photo-bombing Yucca rostrata leaves) 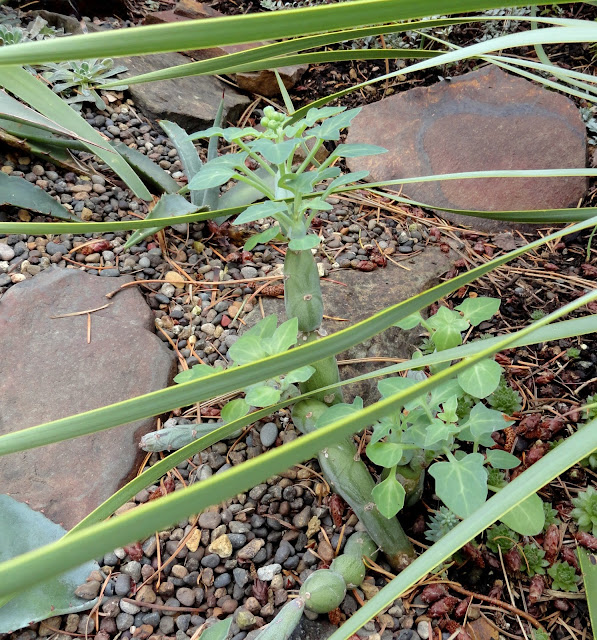 In a few places it's suffered from some creature's hunger. 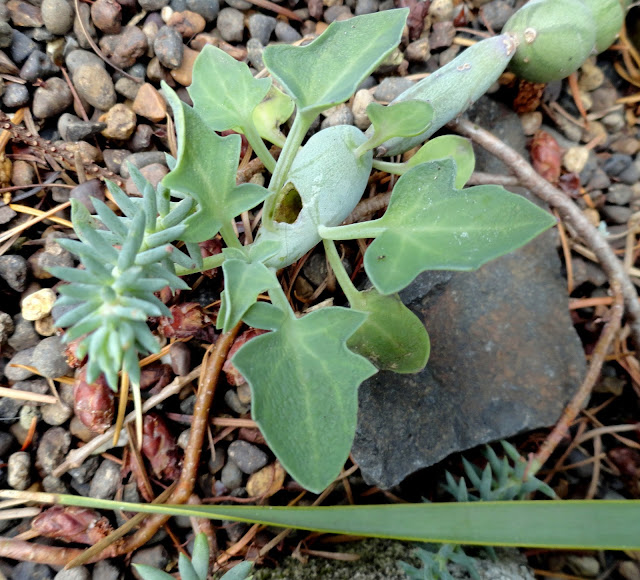 But that doesn't seem to have slowed it down much, and in fact it's fixing to bloom (for a lengthy description of the flower read the description from the Ruth Bancroft Garden here). 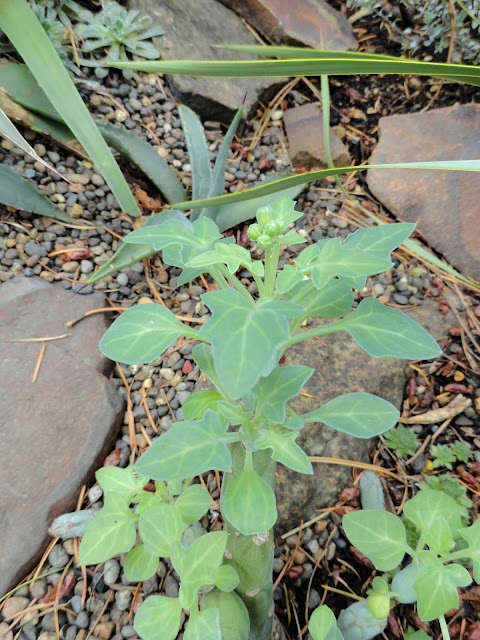 The folks at Cistus Nursery say: "Fun-on-a-stick, this intriguing, succulent, South African daisy produces articulated stems of succulent blue with small, three-lobed leaves. They go deciduous after producing sweet-scented, pale pink shaving brush flowers. For winter rainfall areas with thin soil. These are easy to grow in bright light though would prefer to be damp in the winter and dry out a bit in summer...but seemingly impossible to kill no matter what you do. Very sculptural in a pot or as a strange ground cover where temperatures seldom fall below 20 °F. Frost hardy in USDA zone 8B/9a." 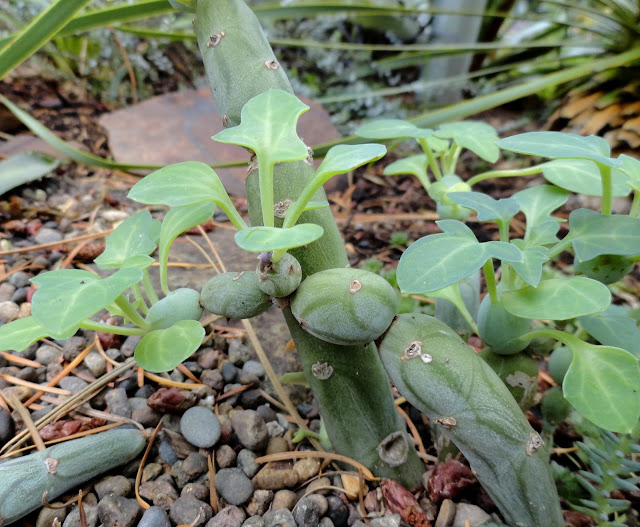 Damp in the winter? Huh, No wonder mine always looks a little sad come spring, I've been overwintering it with the same tough love regimen I give my other succulents. 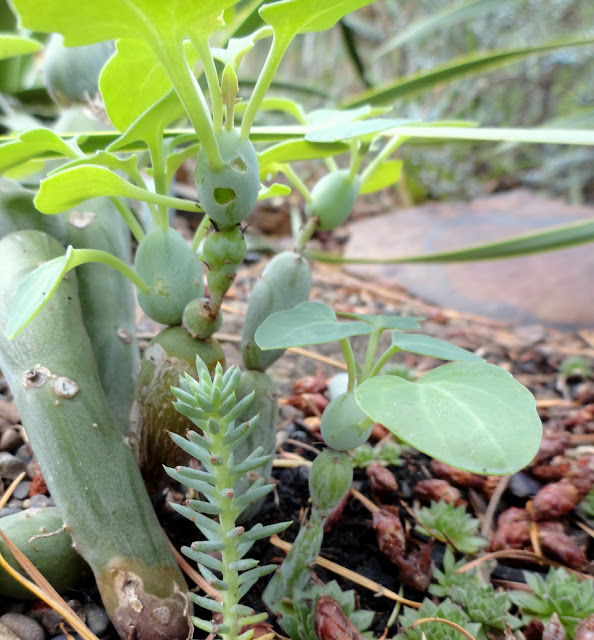 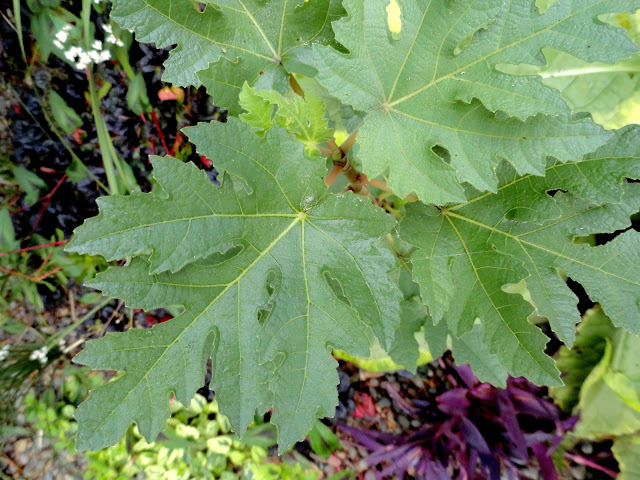 This came to me labeled as Ficus afghanistanica 'Silver Lyre' but I wonder if that indeed is the case, as its leaves tend to be greener than the 'Silver Lyres' I know. Whatever it is I love the deeply cut leaves and how they play so nicely with the blue/green centers of the Symphytum x uplandicum 'Axminster Gold' growing beneath it. 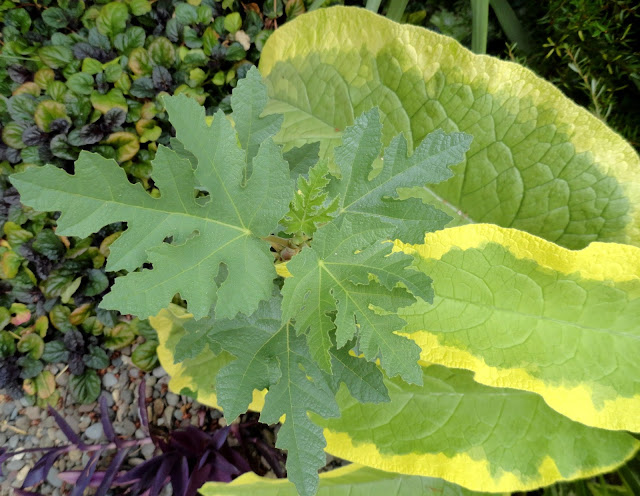 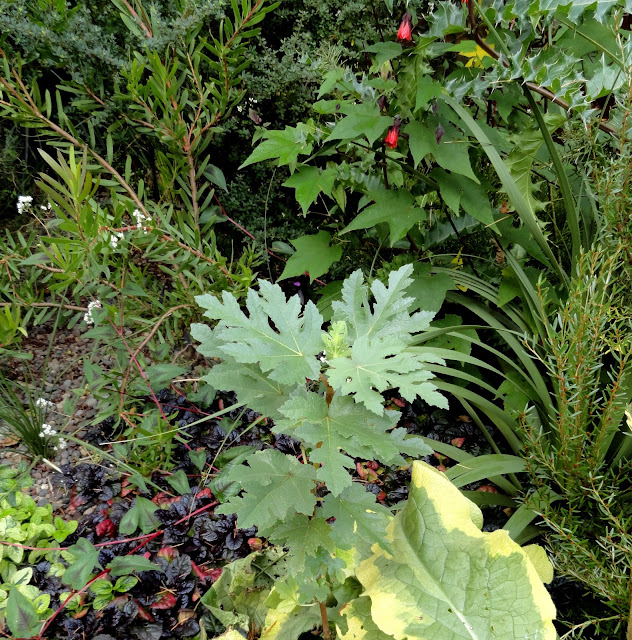 So do you have any garden favorites for October? Please share them with us! 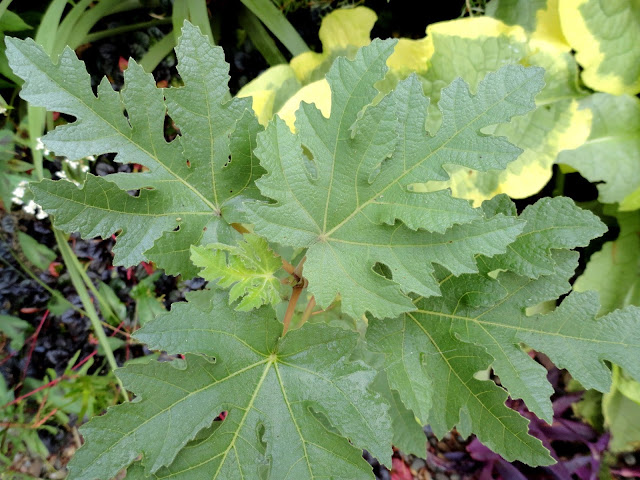