On March 22nd we borrowed the truck from Andrew’s employer and headed east to Burns Feed Store in Gresham, Oregon. Our mission? To purchase stock tank #12. Twelve galvanized stock tanks! We must live on acreage right? Nope our urban lot measures 45.36’ wide by 111.2’ deep. 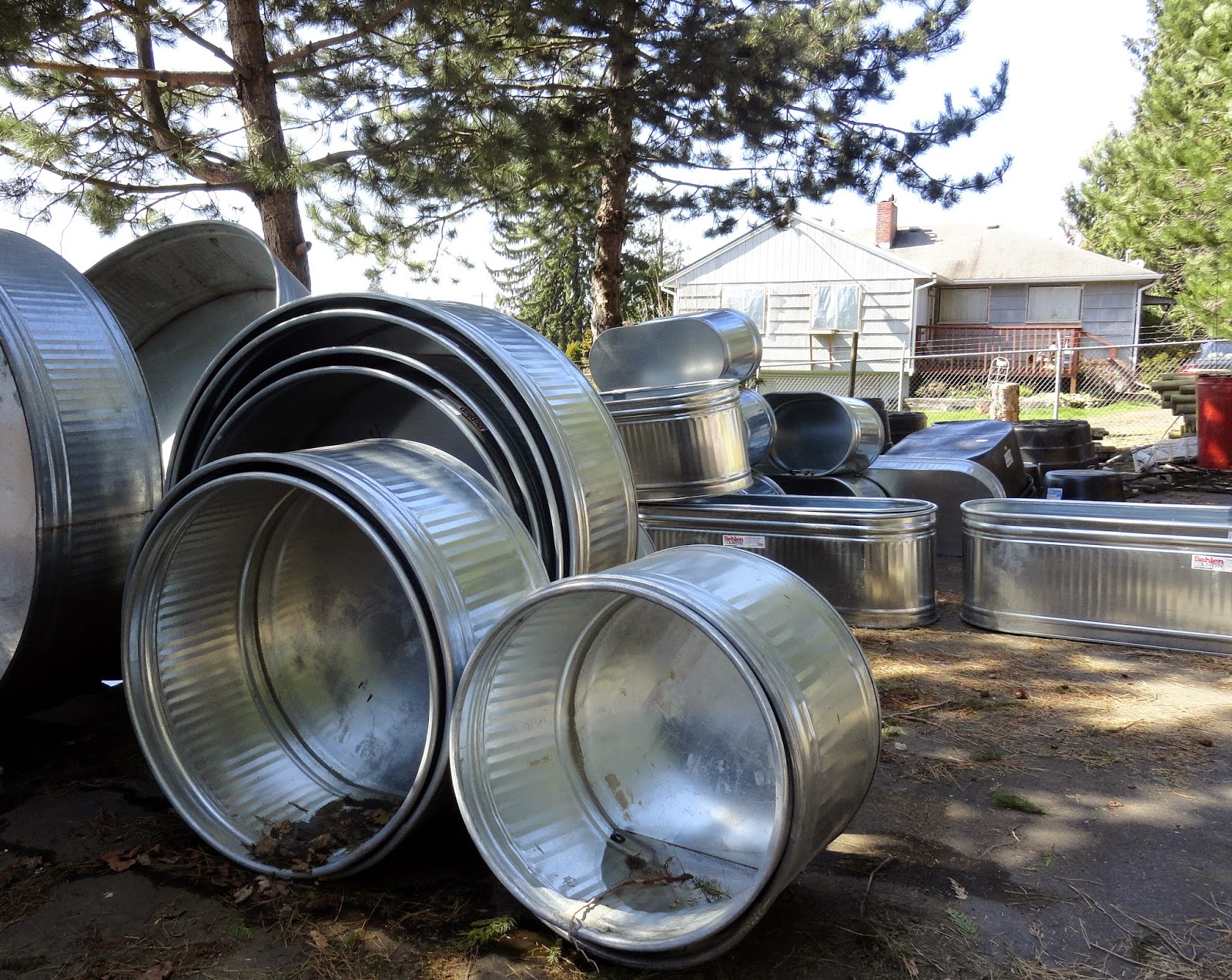 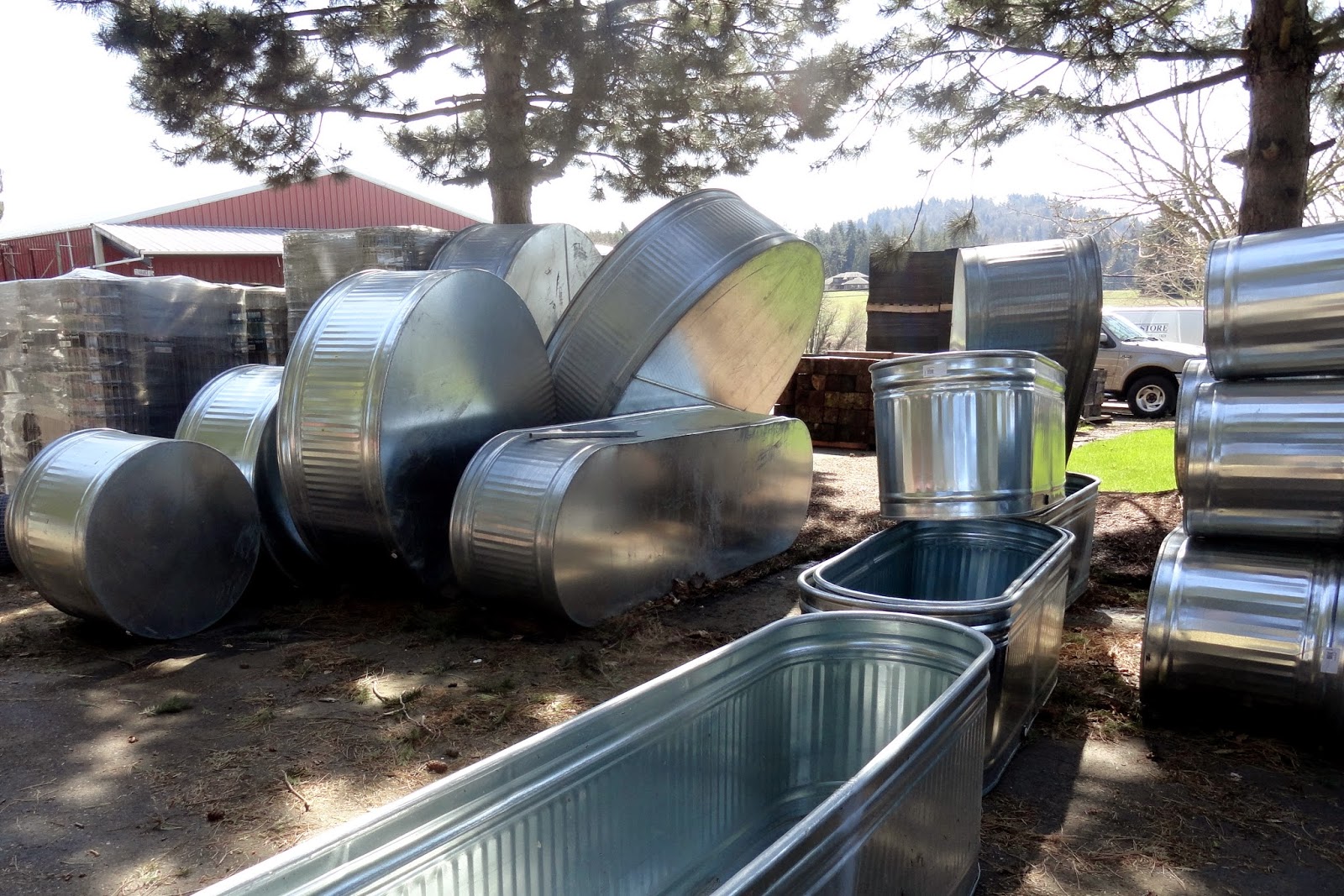 However I'd done my homework and knew just how large a tank we were after, yes that's my attempt at measuring and staking out the new tank below. This was to be our new "full sun" stock-tank pond located in the former privet lands. There are so many more water plants that can grow in full sun, I'd filled the old tank with soil and was thrilled to be getting a new, larger version. 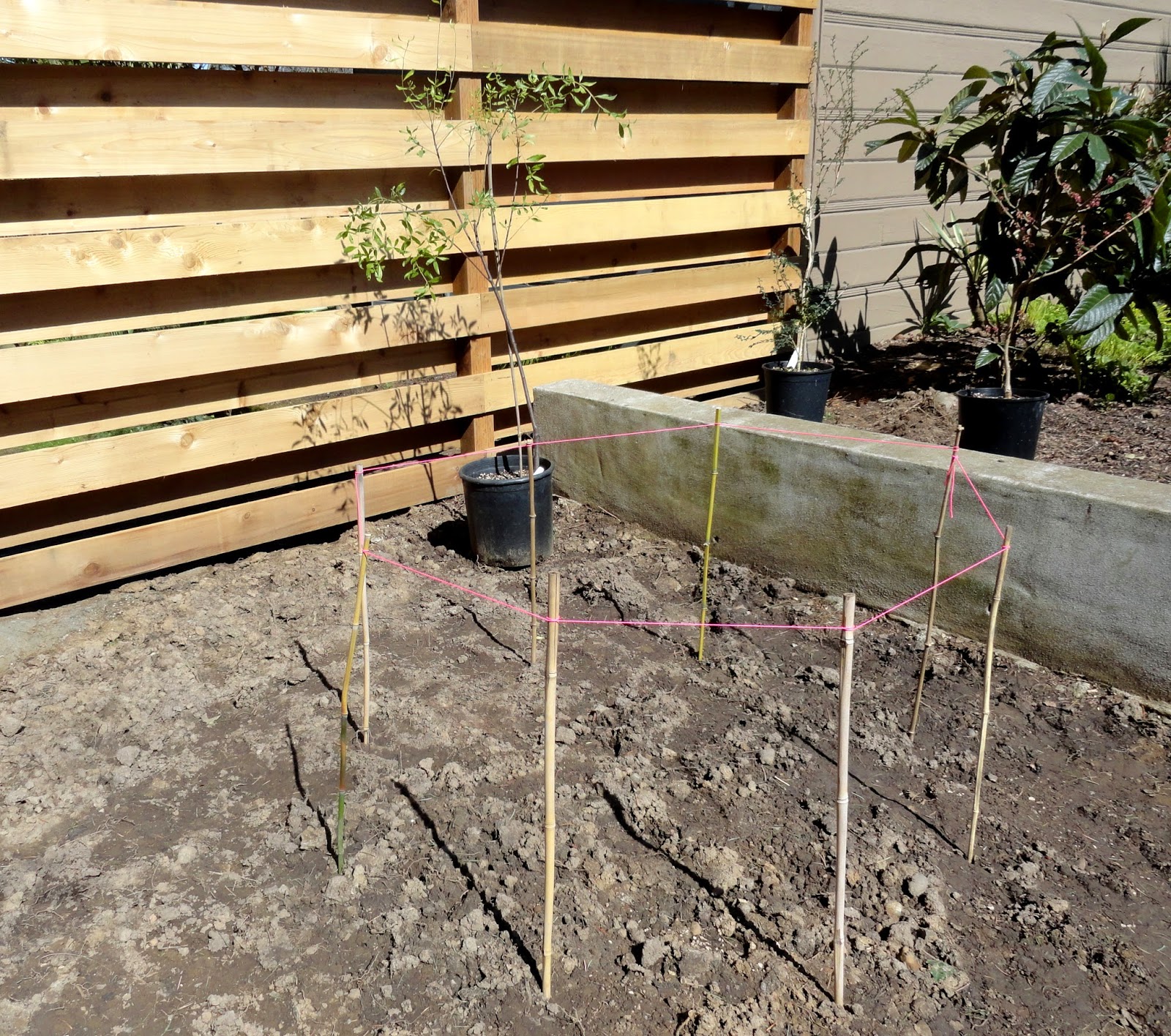 At 4 ft round this was going to be fun to fill! 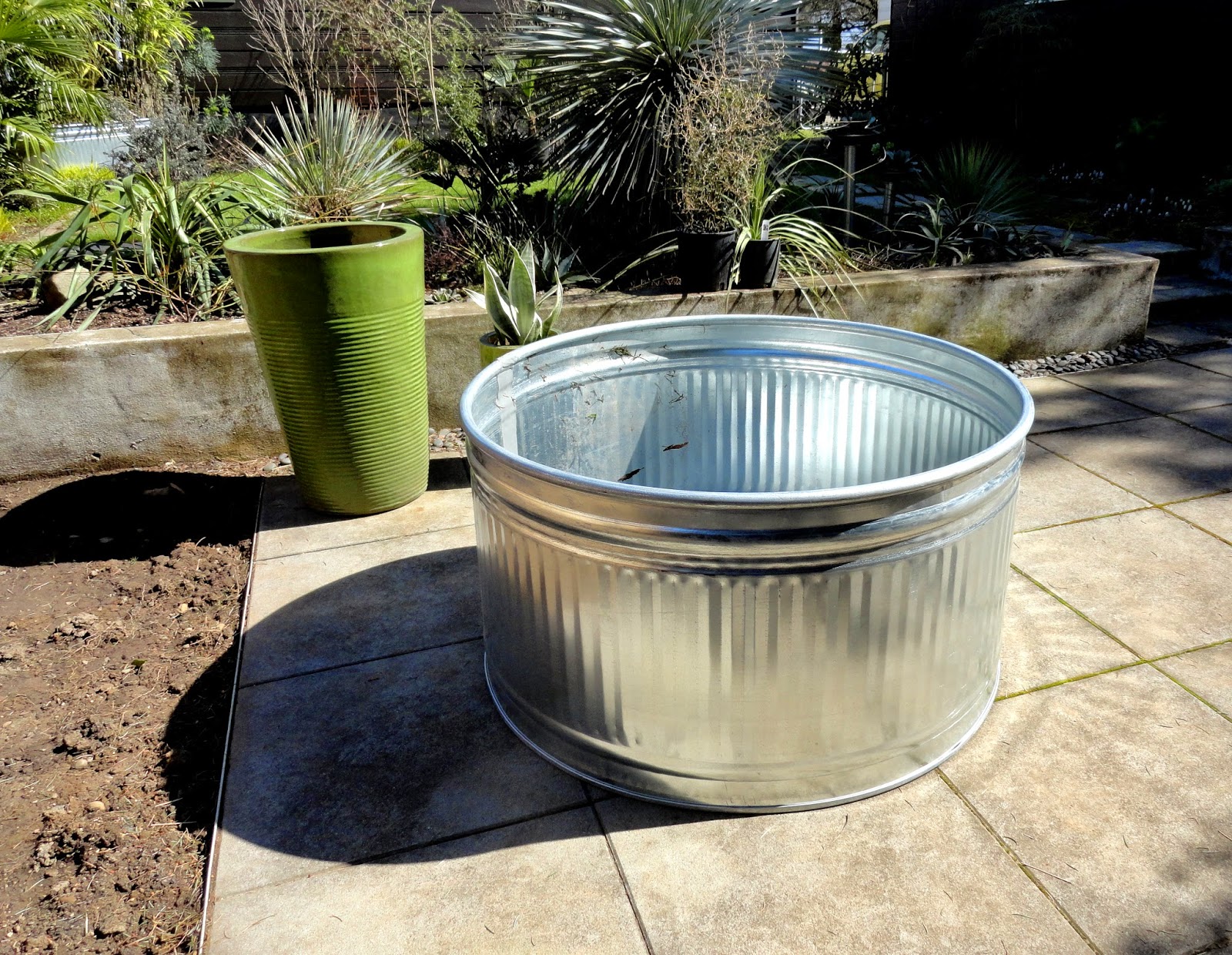 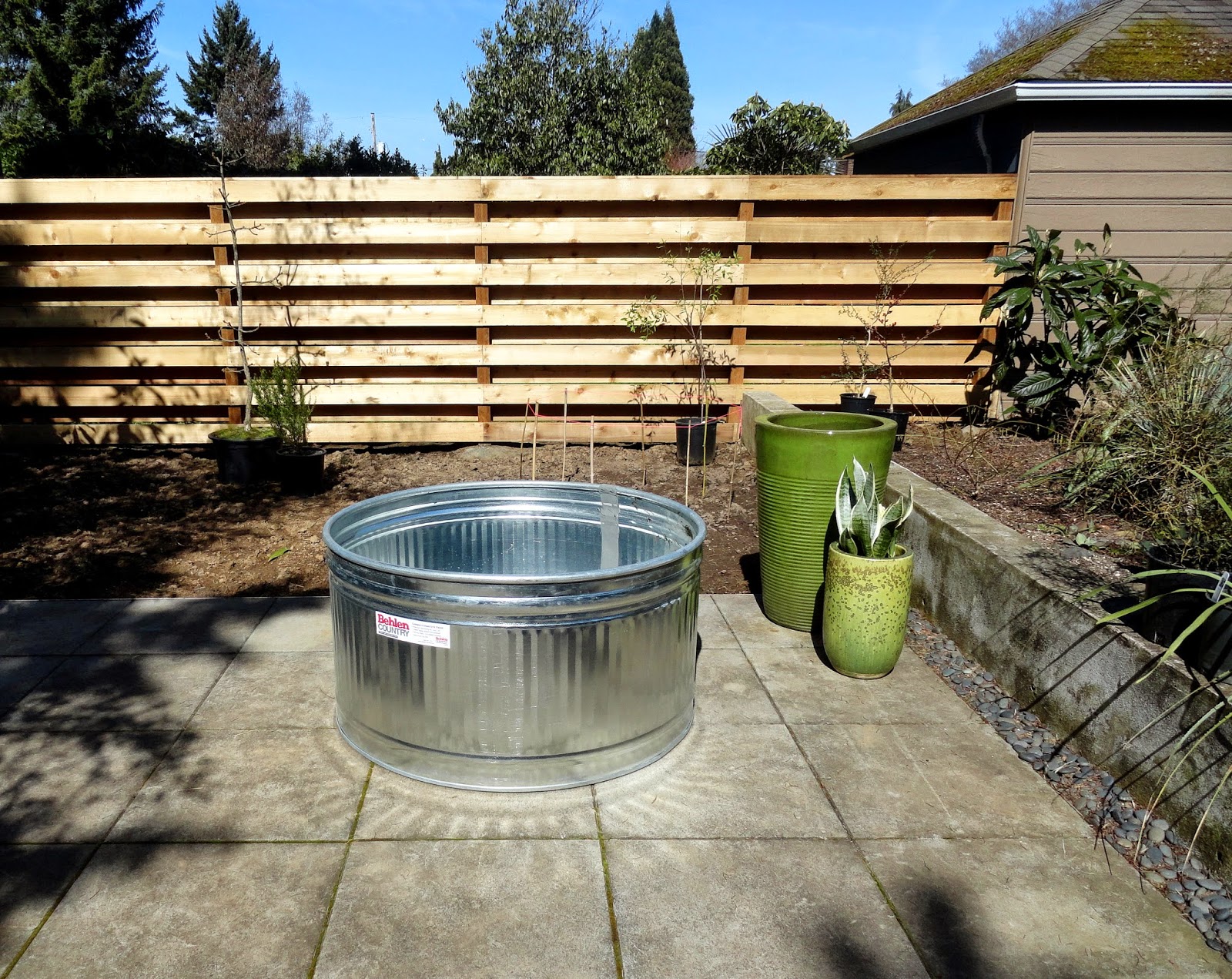 I may be biased but I don't think any of our other 11 tanks really scream out "tank farm!"...here's the first we bought. It helped fill the gap between our house and the neighbors garage, at the end of their driveway. 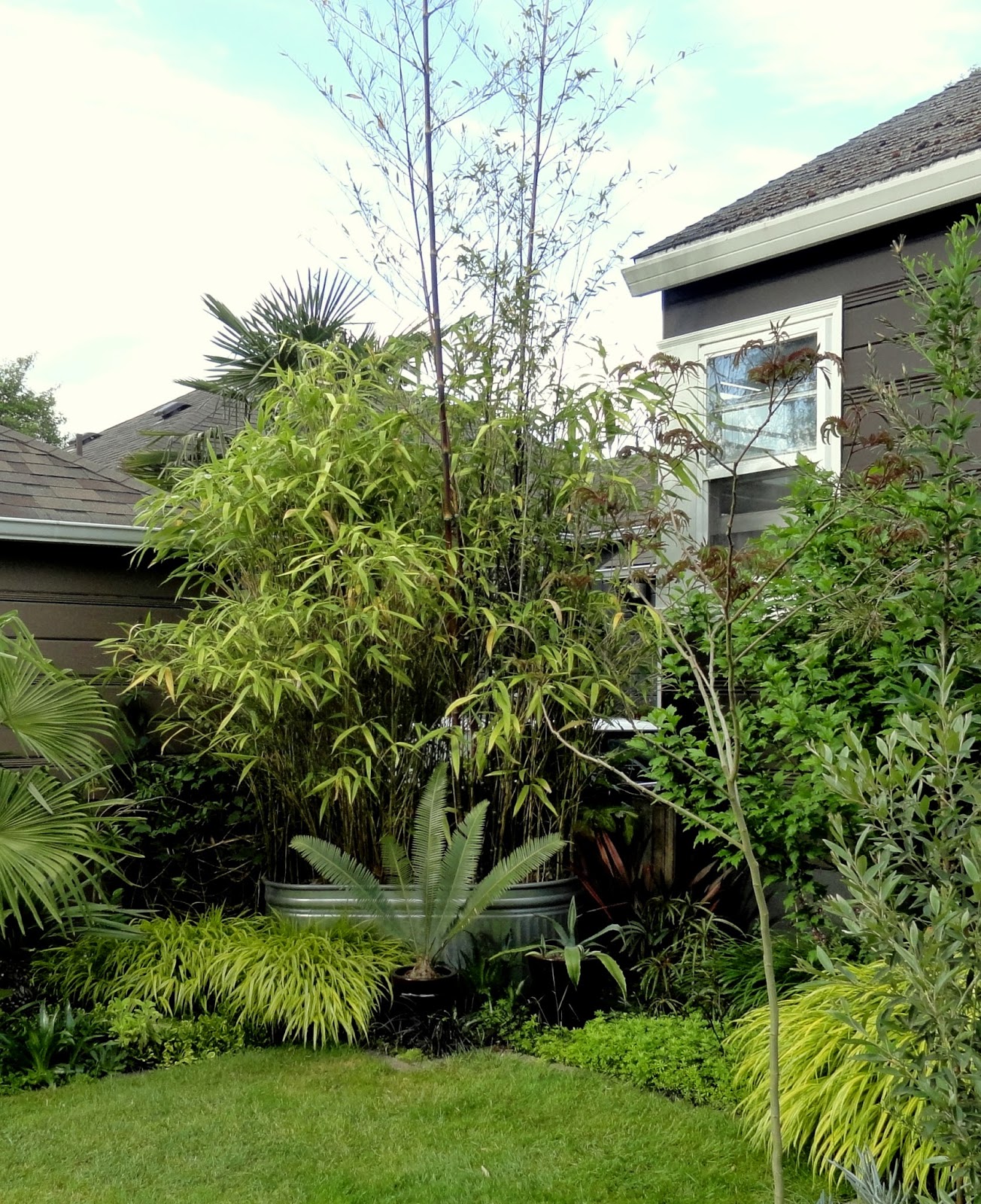 Next up where the trio next to the patio. All full of bamboo... 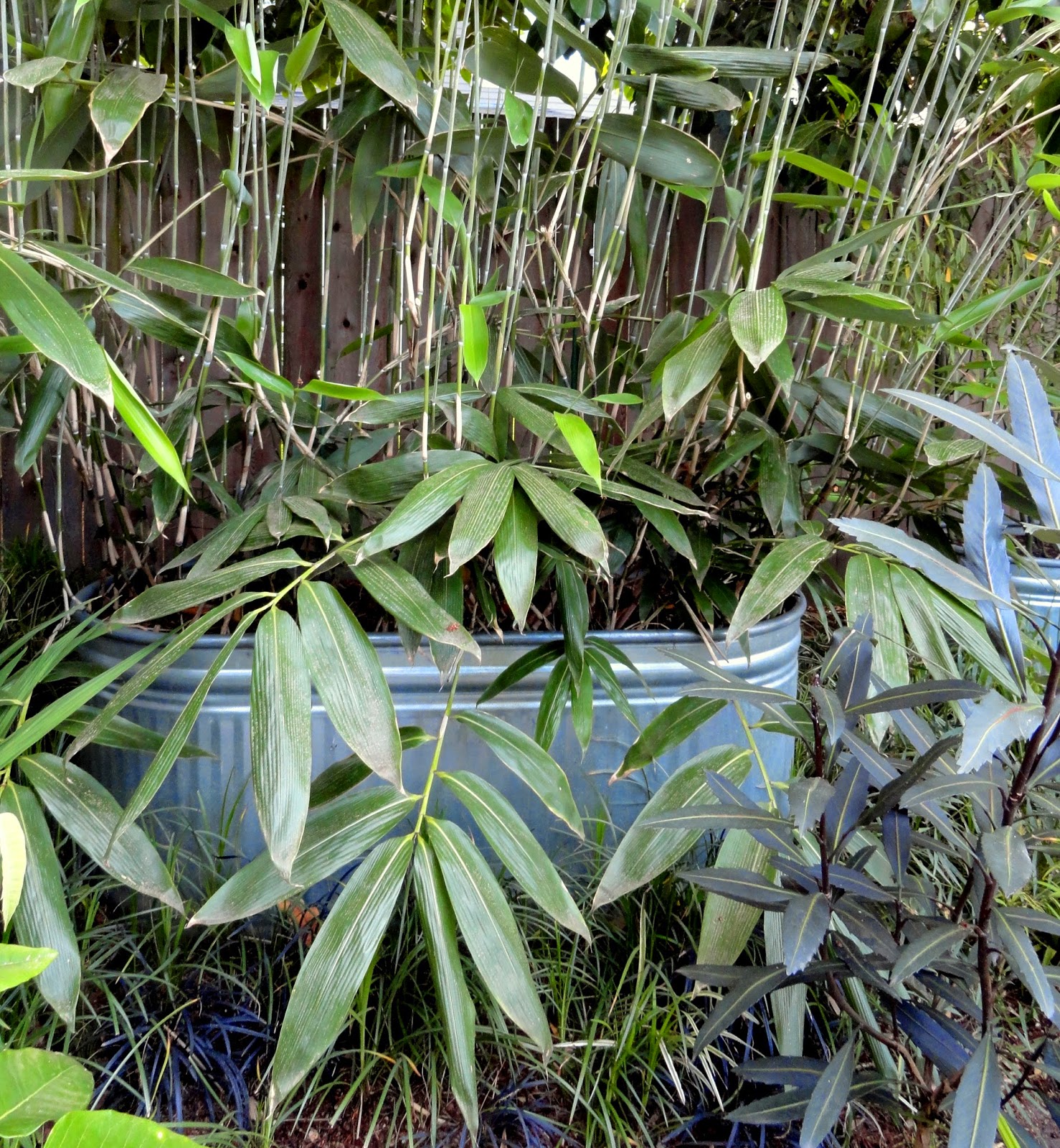 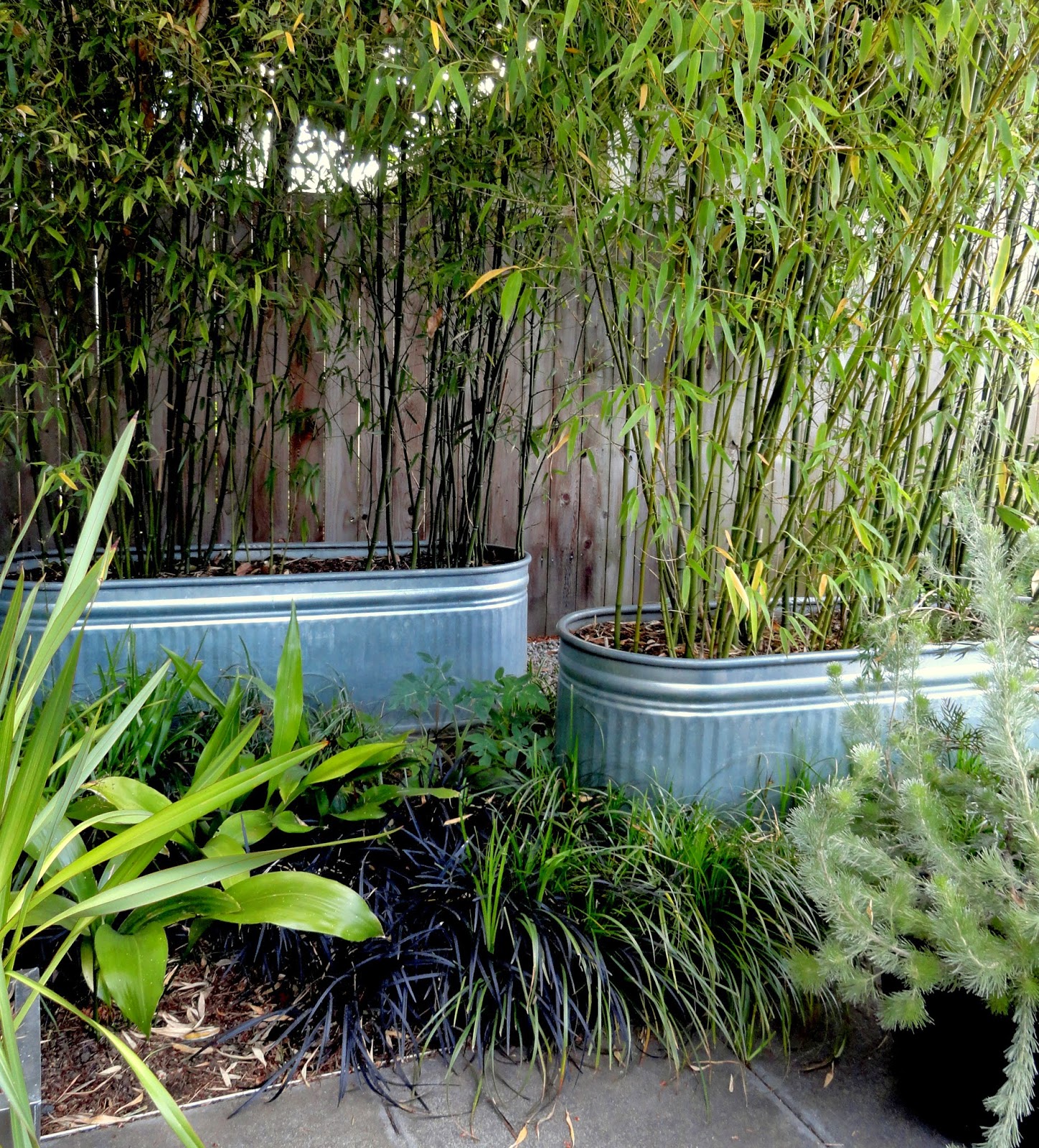 The tetrapanax and gunnera tanks anchor the SW corner next to the shade pavilion. 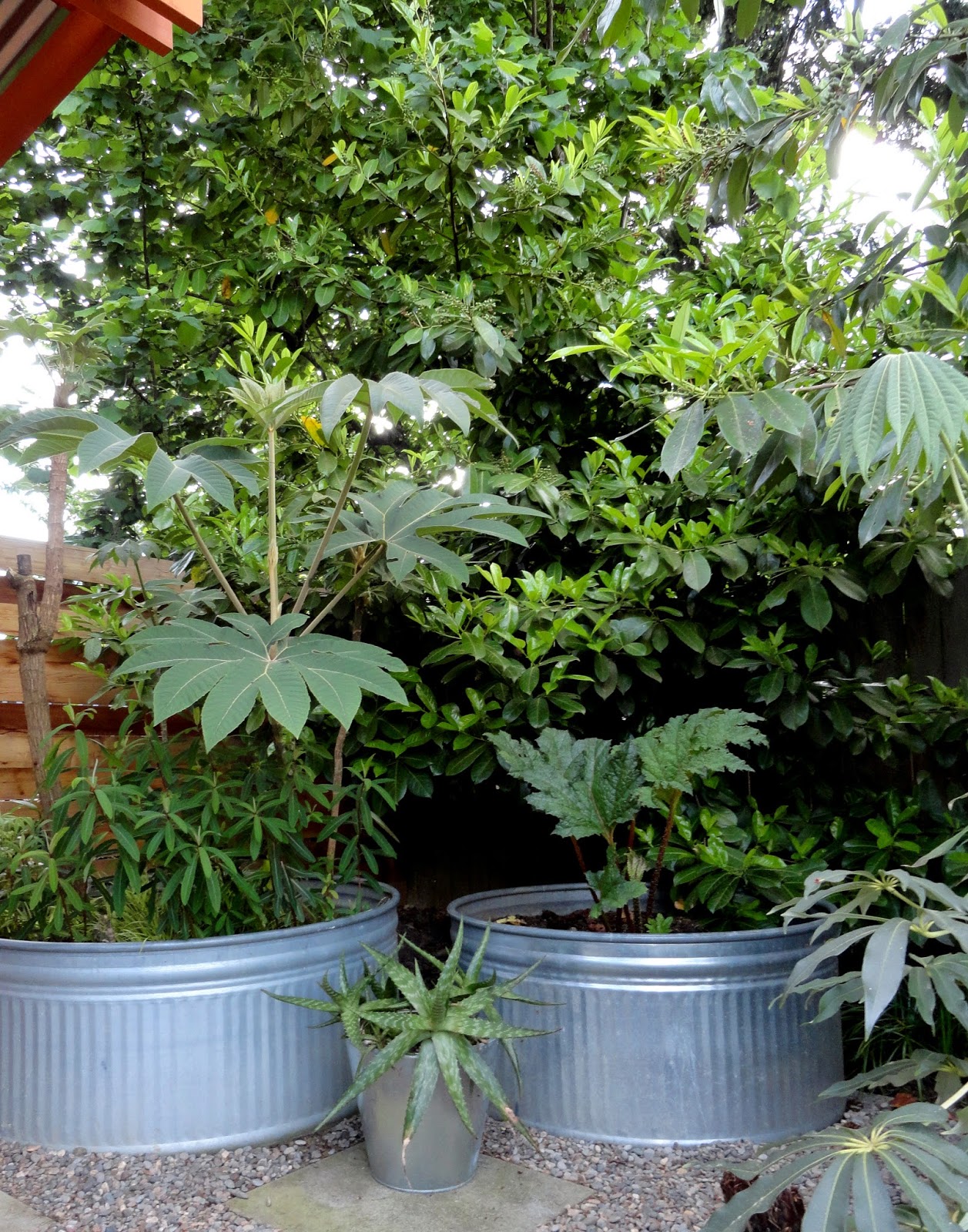 This pair is the summer veggie garden in the driveway, planted up shortly after taking this photo. They also act as the pot ghetto during the plant "buying season" here they were holding my purchases from Rare Plant Research and a couple plant gifts from a friend. 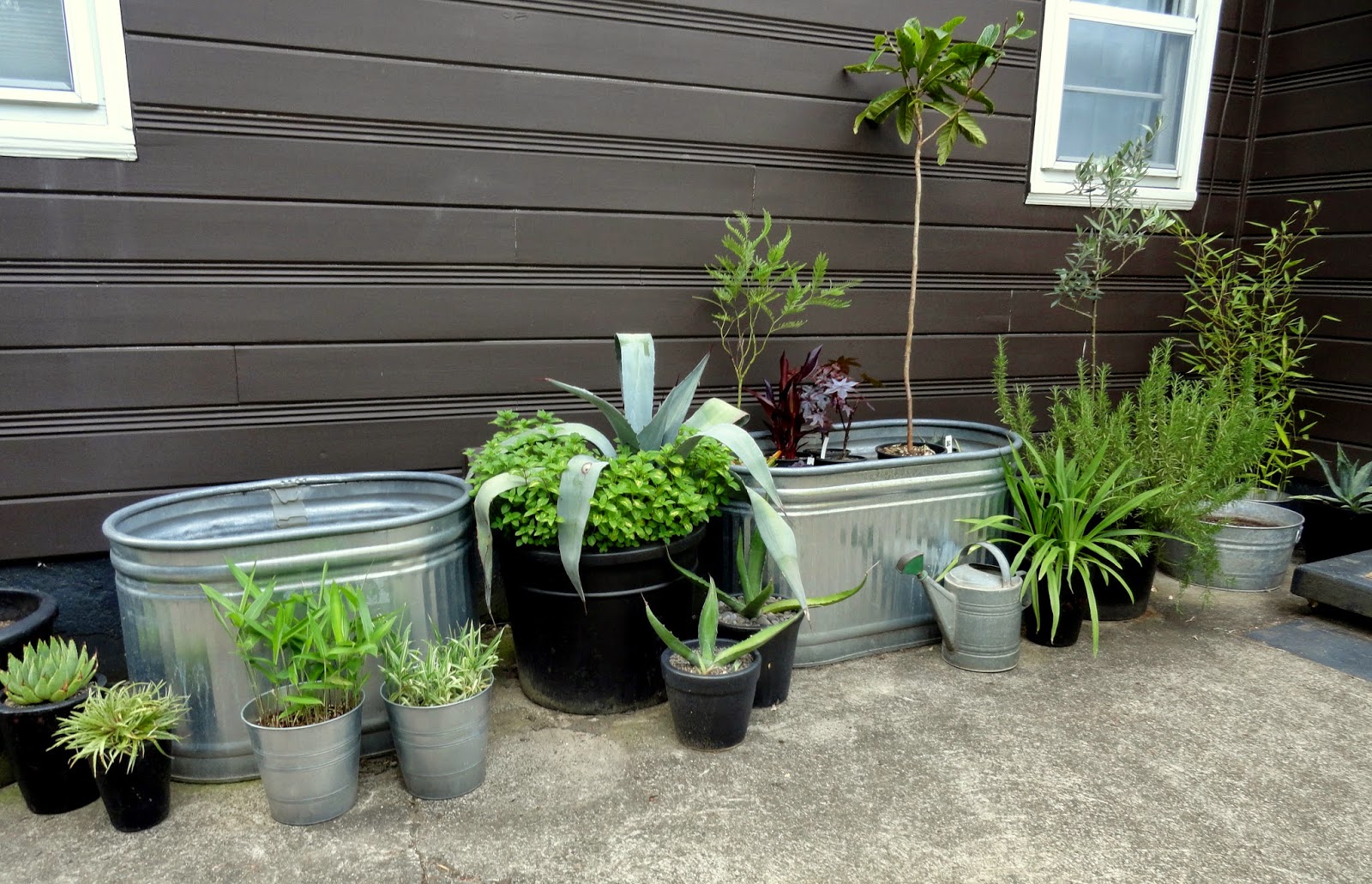 Two more tanks were added to the SE corner, behind our garage. 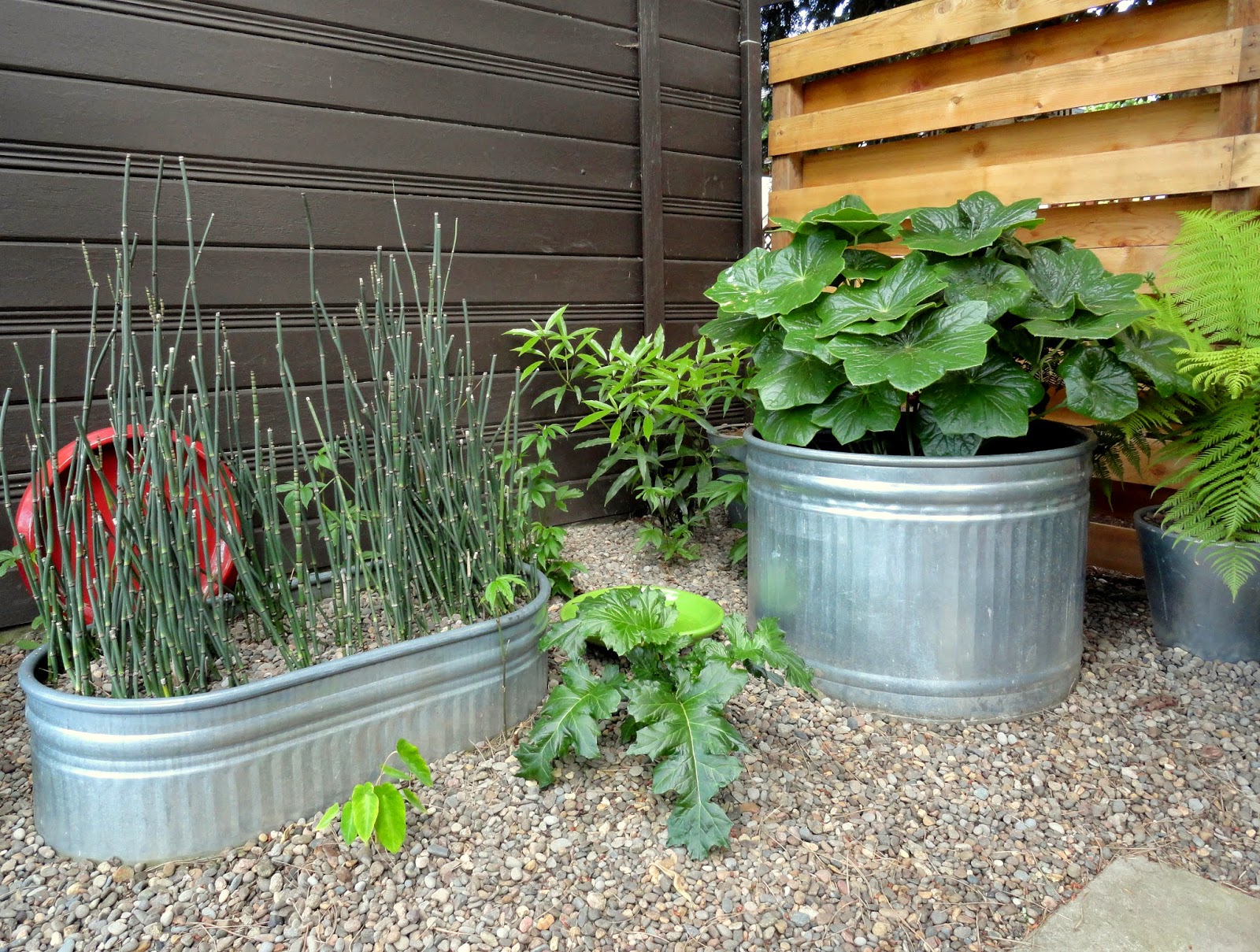 And finally, what I thought was our final (#11) tank on the edge of our driveway helping to hide the neighbors backyard. There had been a wall-o-photinia there but we came home one day to see he'd cut it all down. The bamboo helped to obscure a myriad of unsightly things. 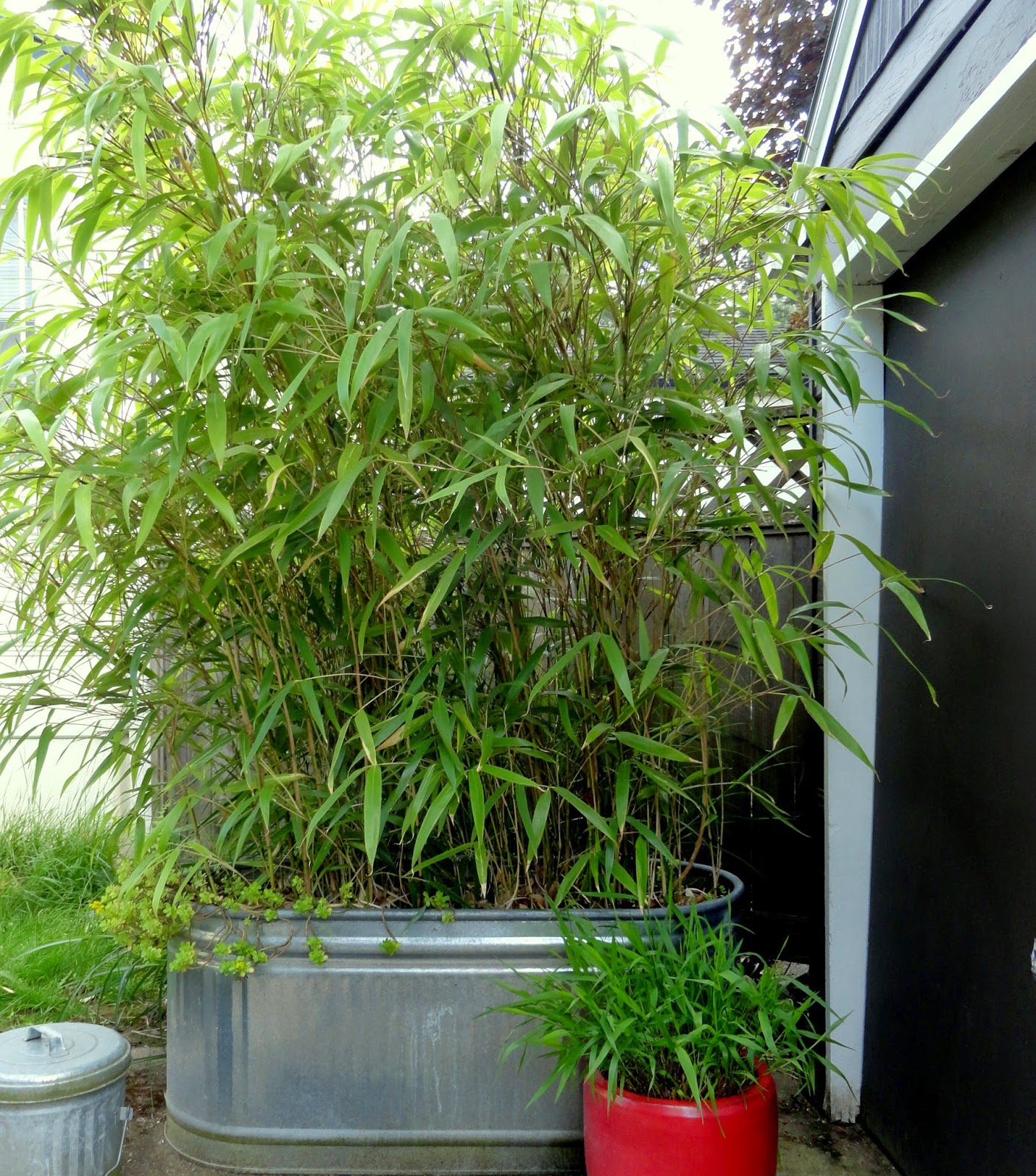 But this post is supposed to be about #12, so here it is filled with water and plants... 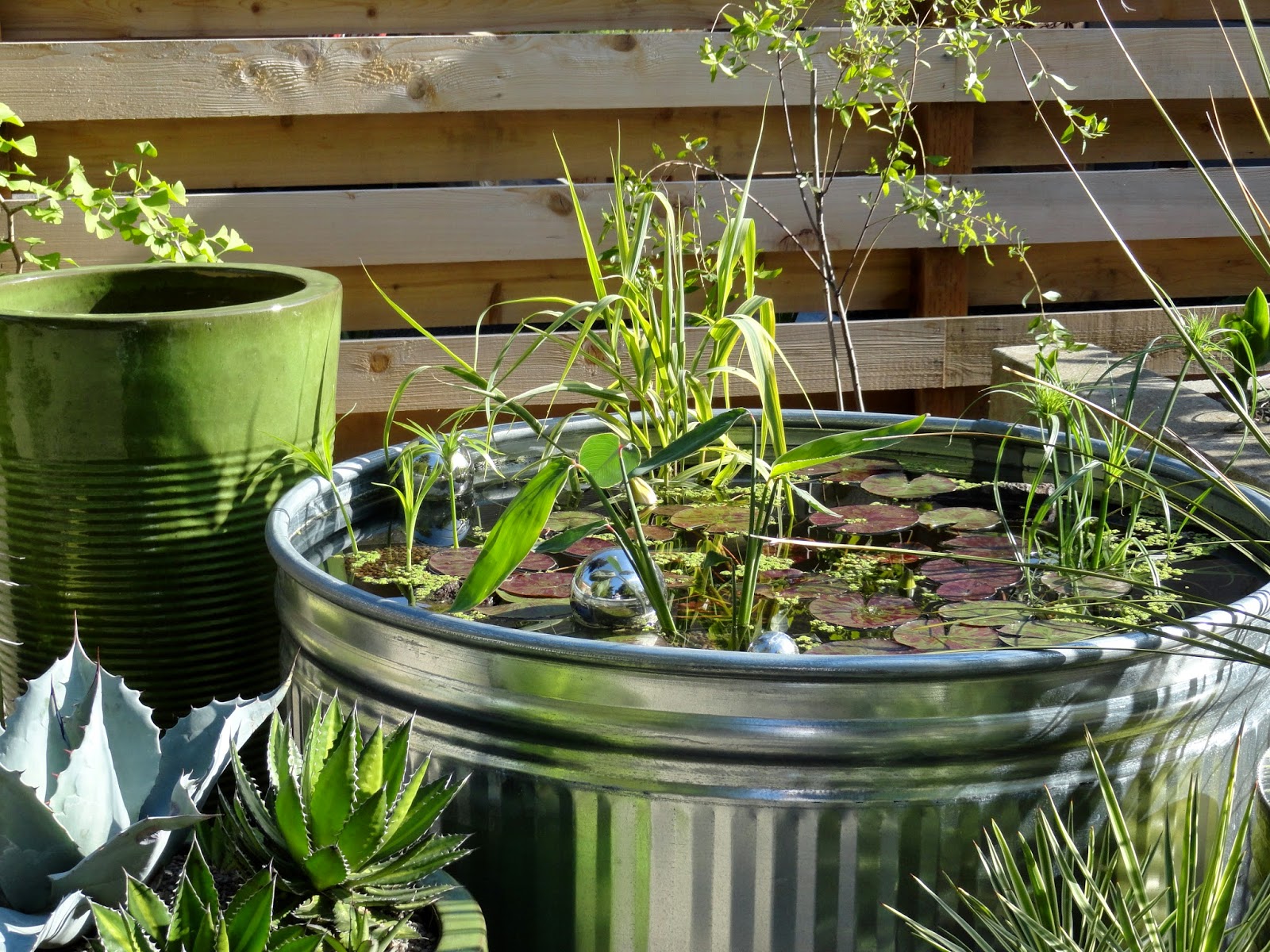 I love this Arundo donax 'Gold', which was bought before moving Mr. Big into the green container to it's side. Their yellow and powder blue stripes compliment each other nicely. 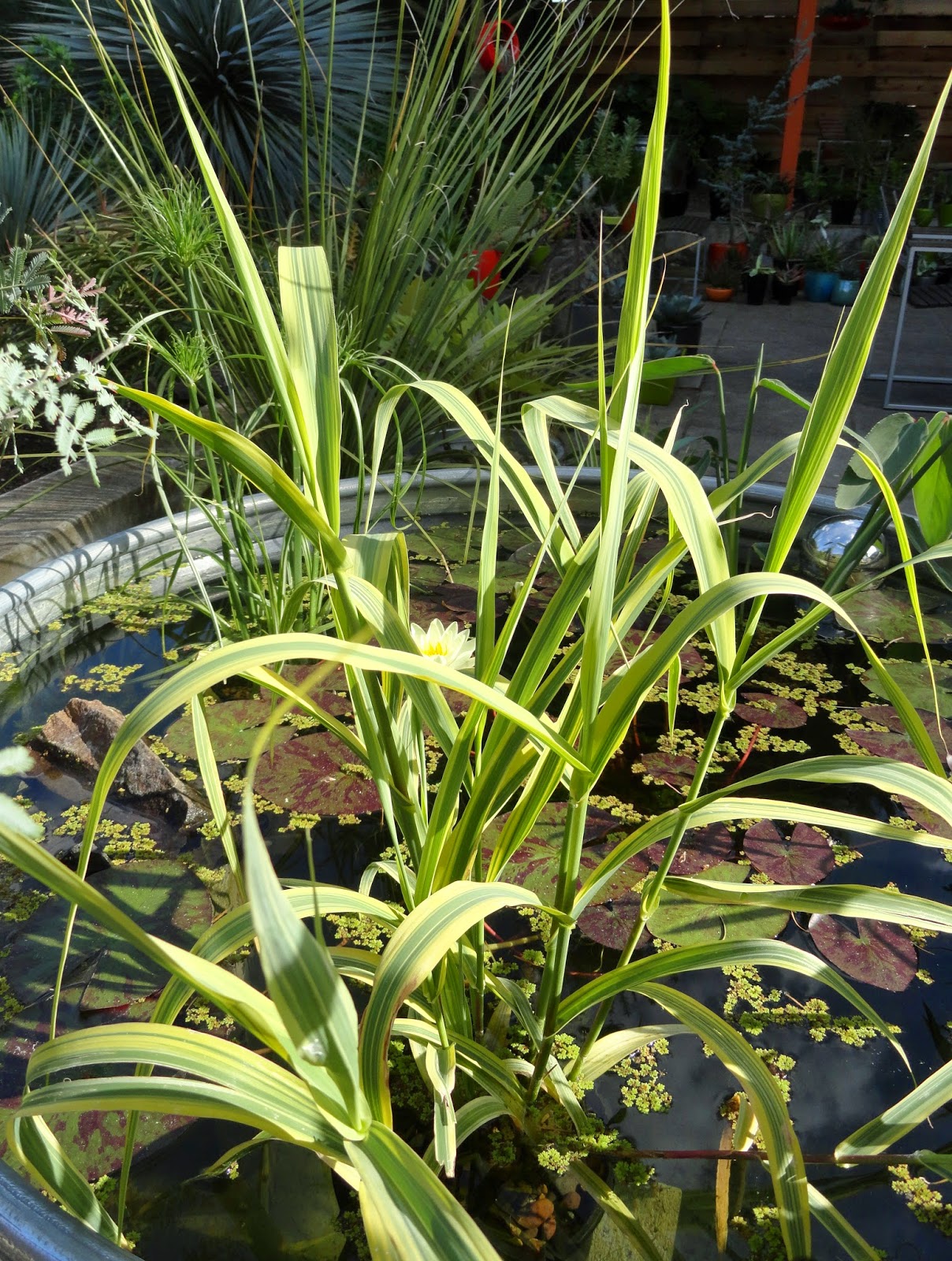 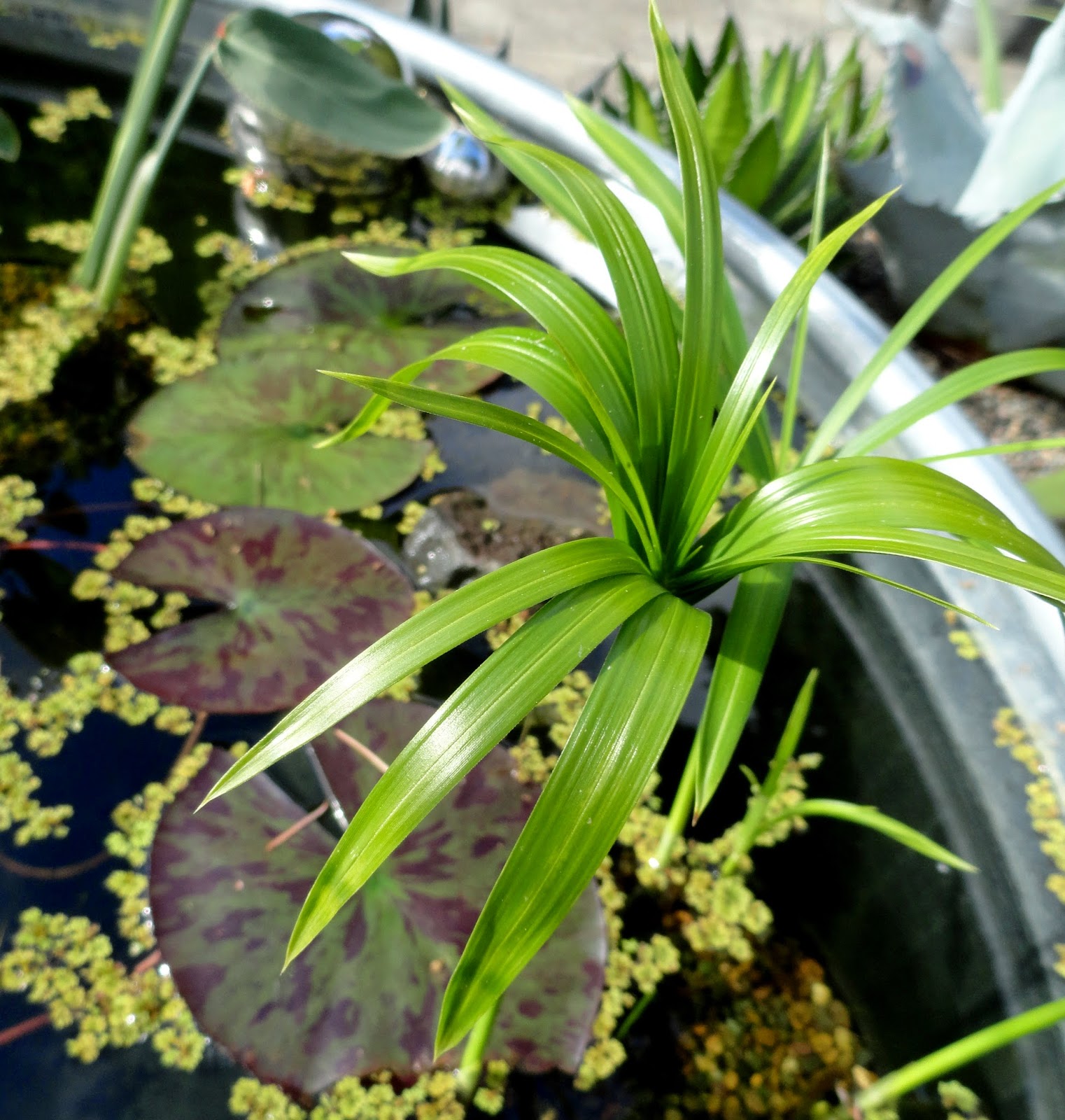 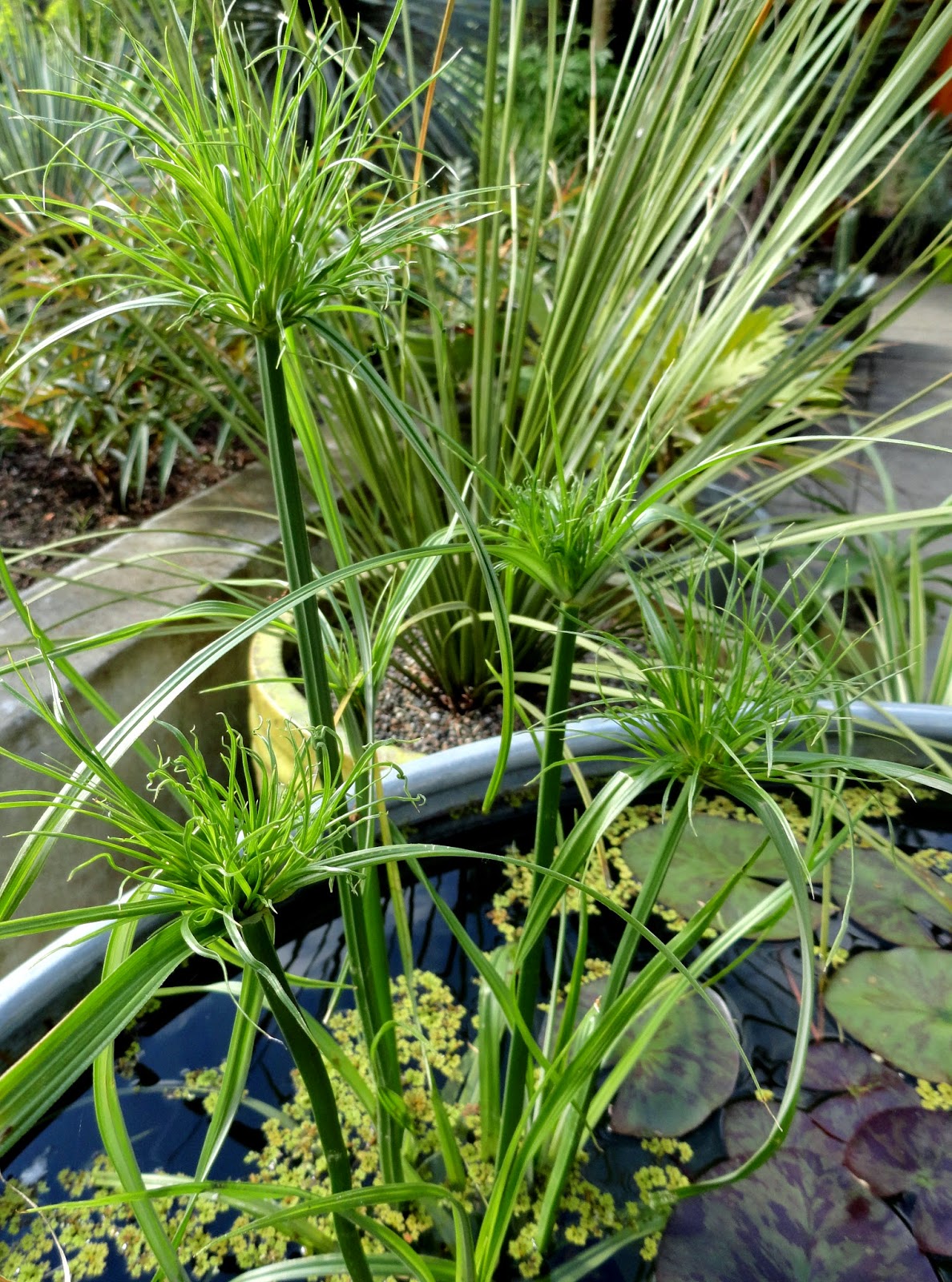 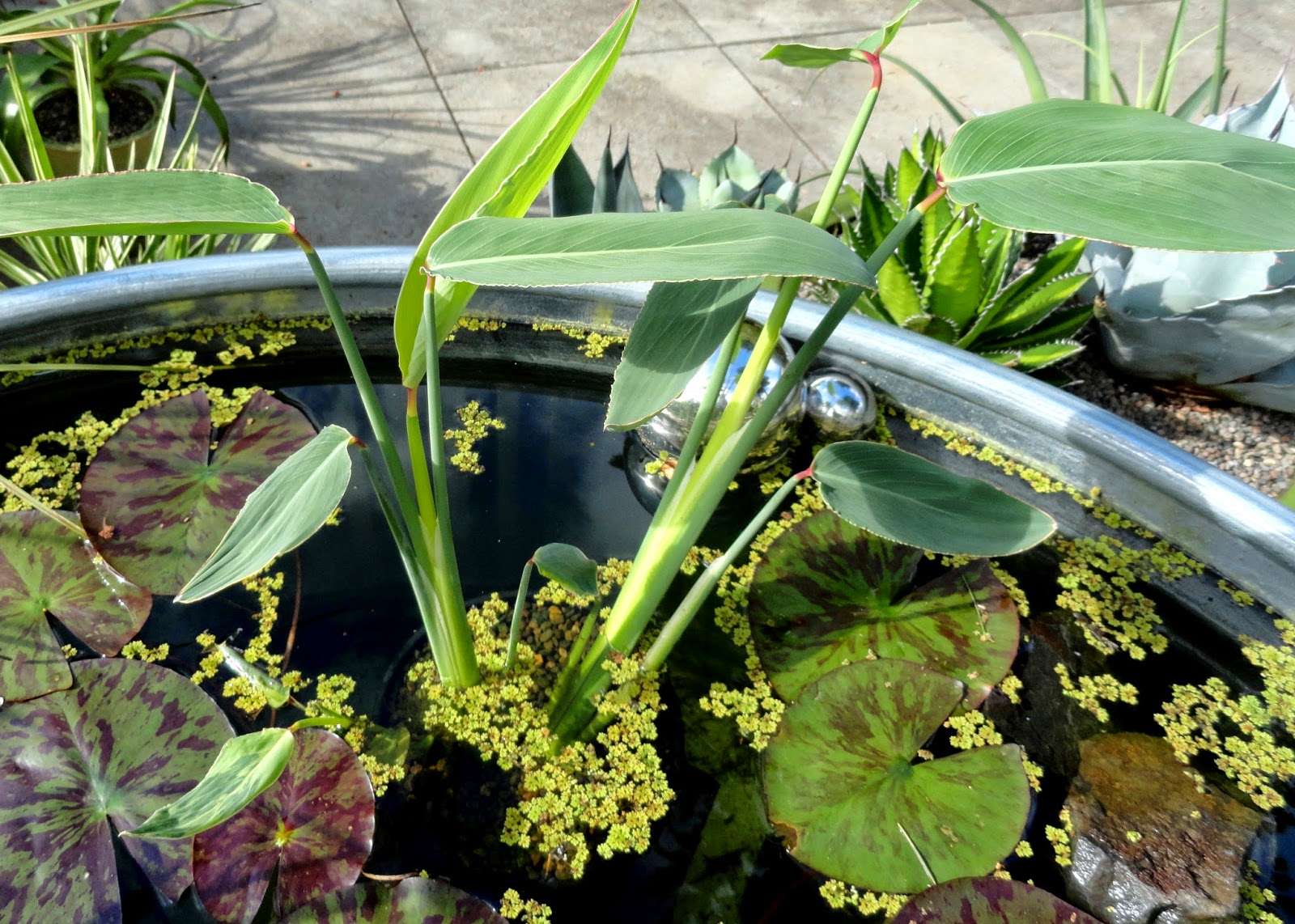 And of course my water lily, Nymphaea 'Marliacea Chromatella' purchased at Hughes Water Gardens. We also brought home a few tadpoles from Hughes (they have a per customer limit of 6), so far I know there are still at least 3 alive. No froggies yet though... 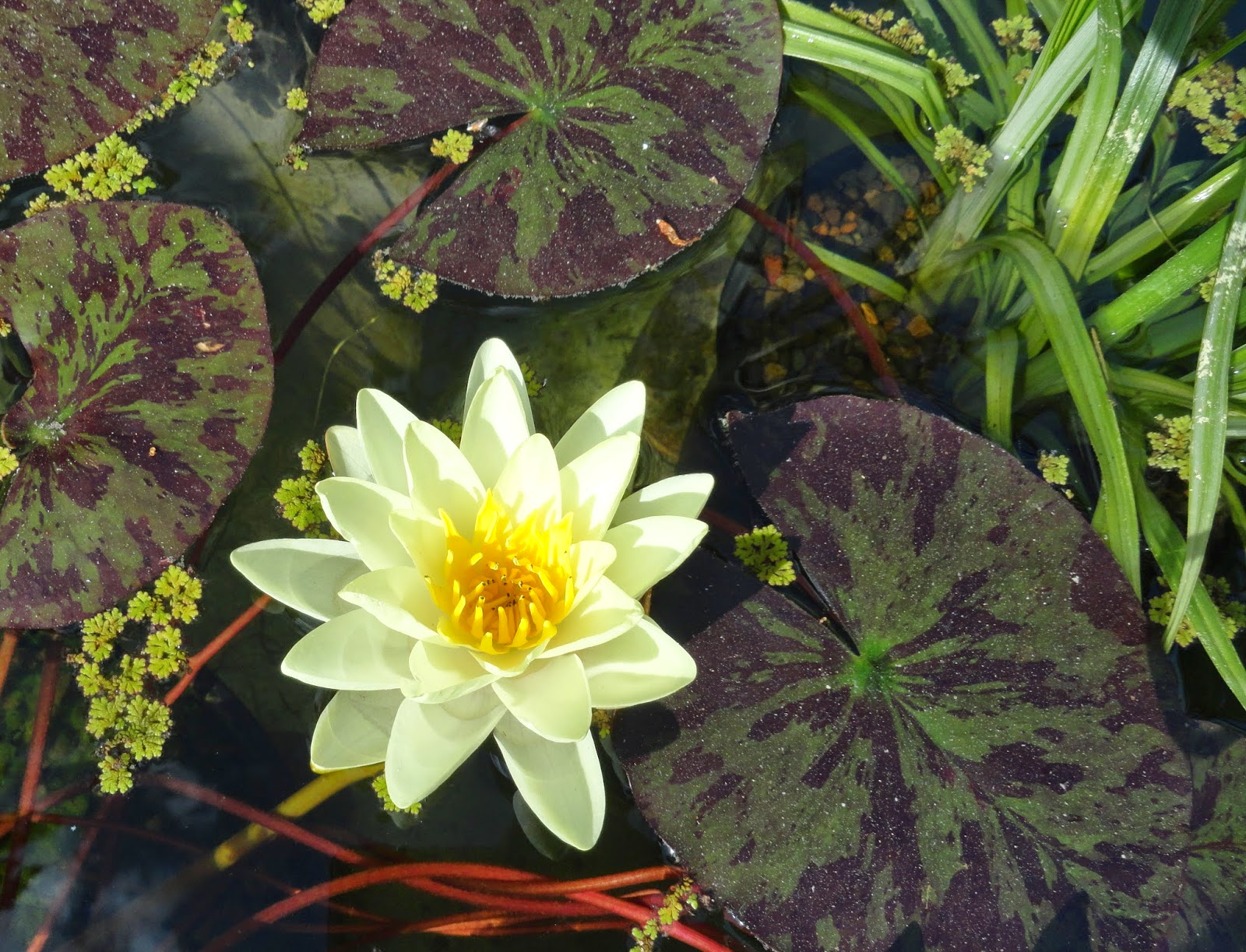 I just had to include another close up of that Arundo. 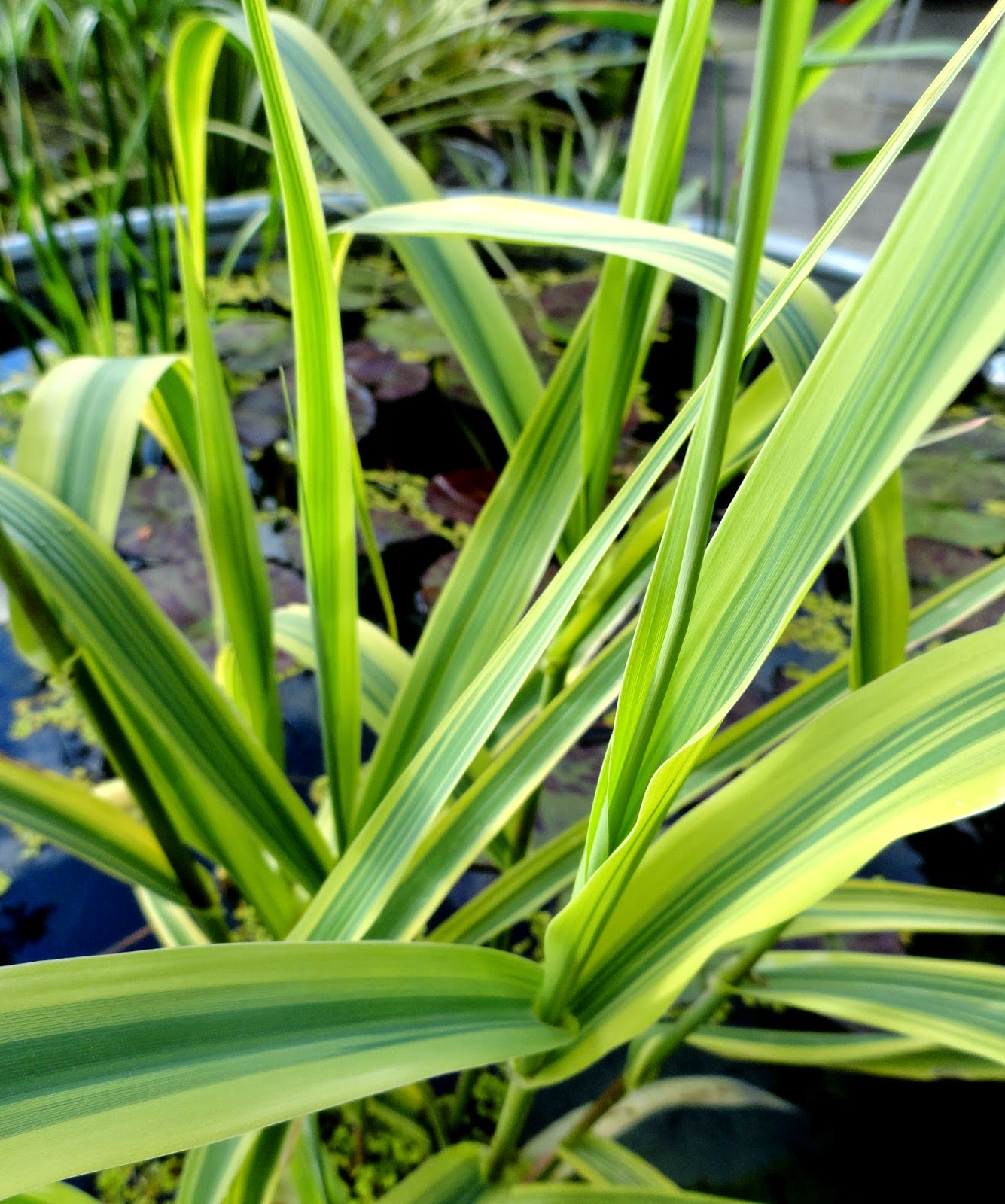 Before I shared an image with the agave (sans the burlap surround I later added). 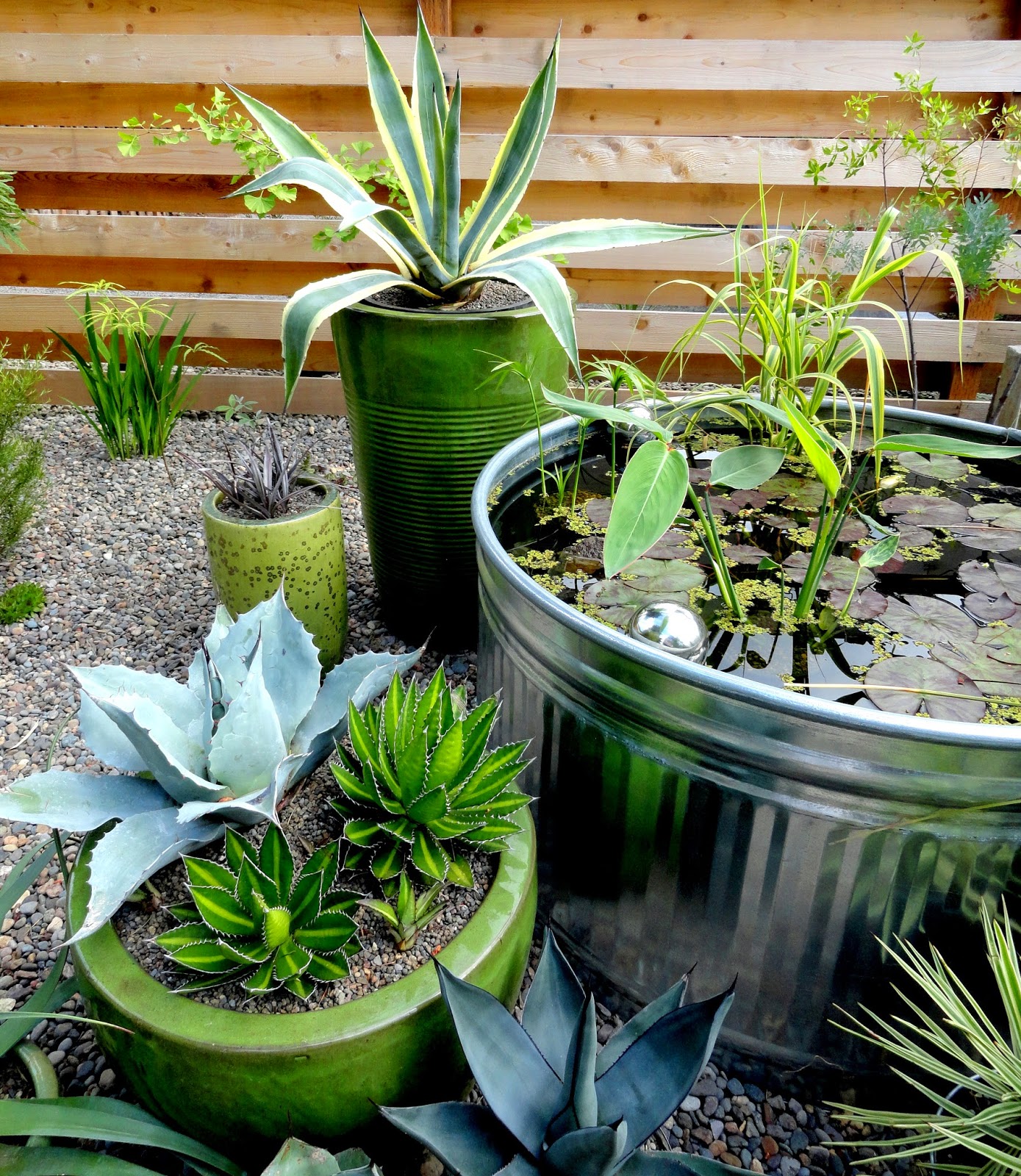 With other pots grouped around it I think (I hope) it looks less tank like. Okay, #12, I think that's finally the last one... 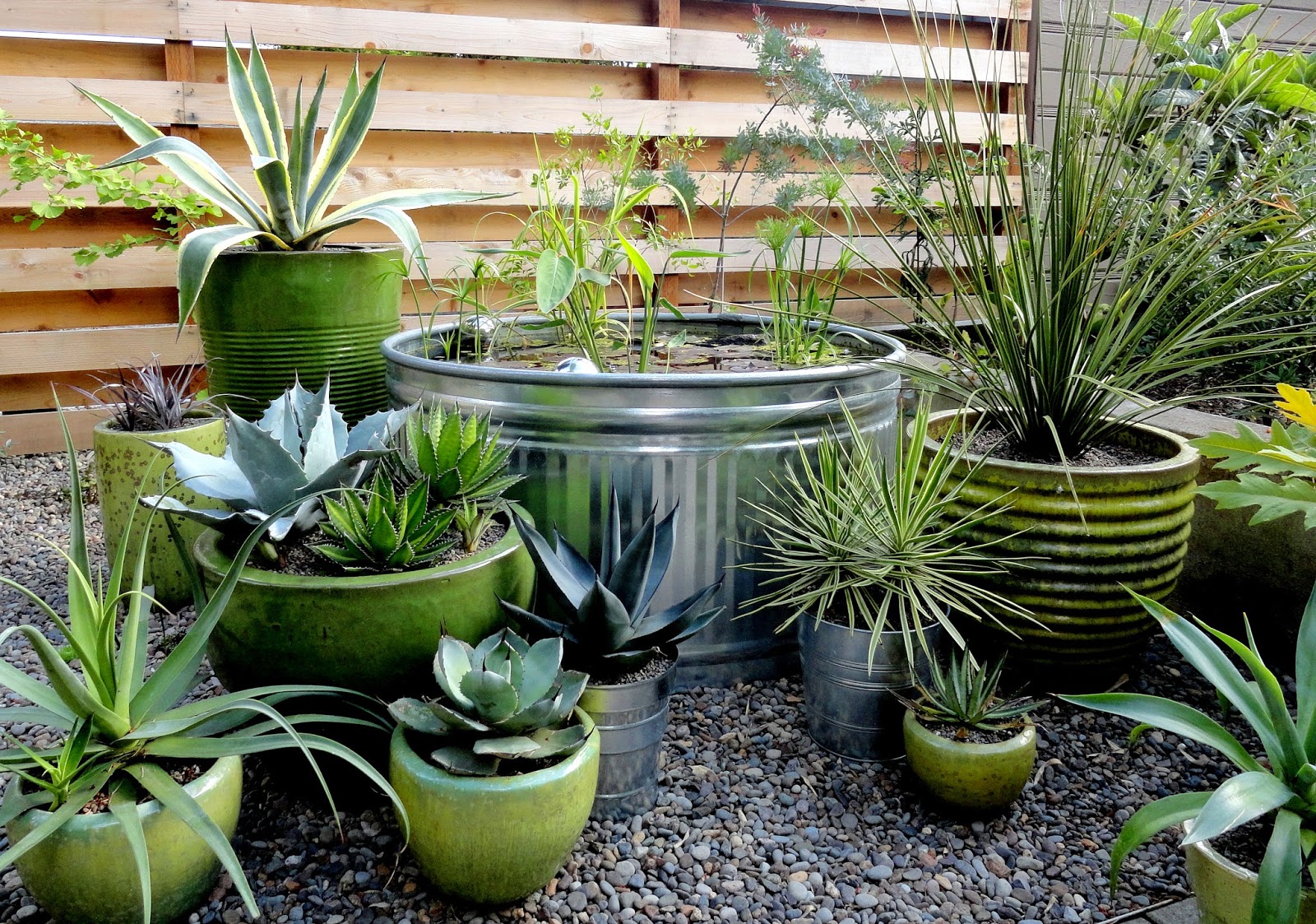