Bring me a pup! I jokingly said to my brother when arranging to meet for lunch…

My journey home from New Mexico had me routed through Phoenix, AZ. A little manipulation of the connecting flight and I found myself with a couple hours on the ground; my brother, sister-in-law and adorable nephew picked me up and we headed off to lunch. I’d asked for a pup as a bit of a joke and only because he always seems to have a few lying around, ones he’s dug from around a mama plant and didn’t have the heart to just toss. I had no idea I’d be getting this… 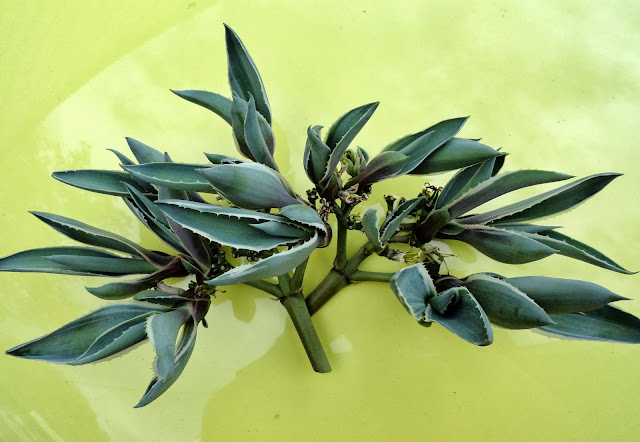 Little agave baby bulbils! Not just one but at least 13… 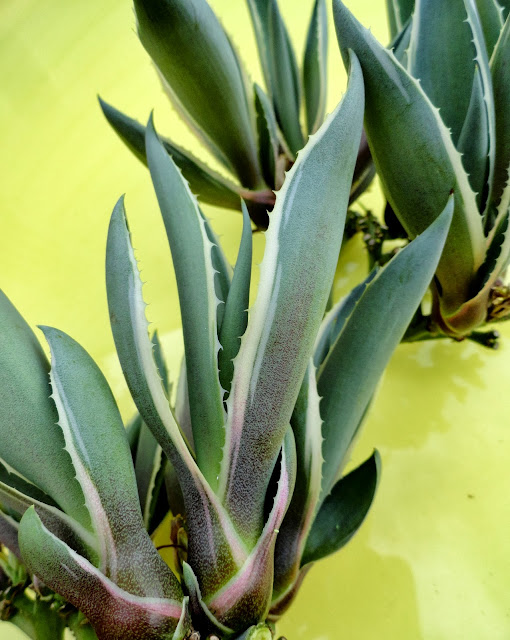 He’s not big on tracking plant names, so he couldn’t tell me exactly which agave they came from. 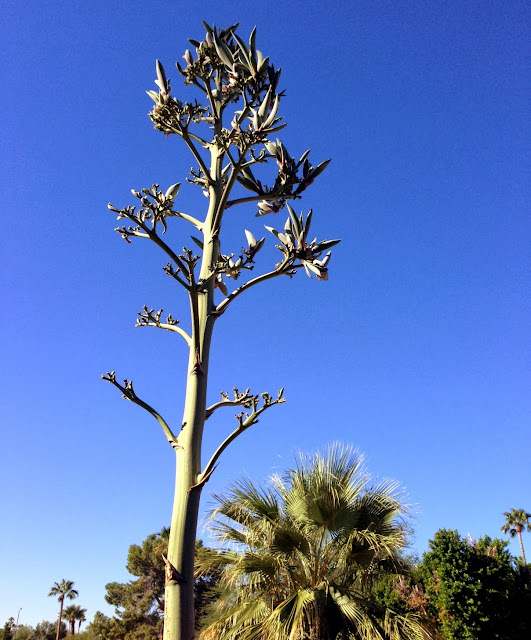 He did however share a couple of pictures and I think it might be Agave angustifolia 'Marginata' (Caribbean Agave/ Agave vivipara 'Marginata'). 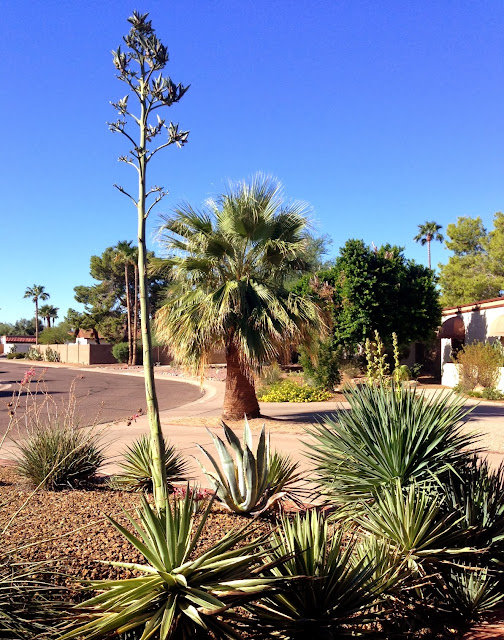 Here’s my A. angustifolia for comparison. 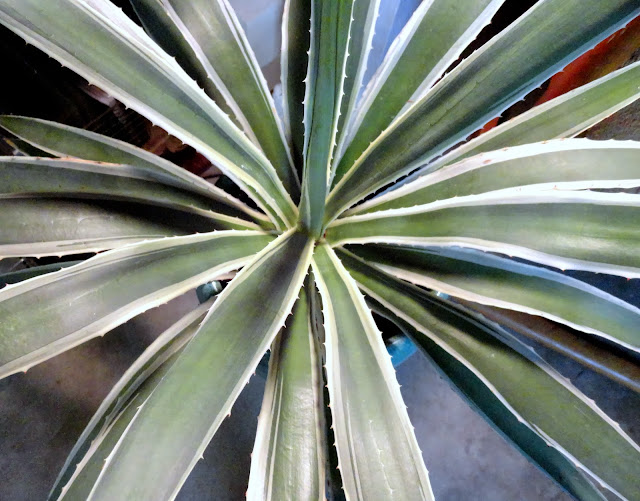 San Marcos Growers says: “A medium sized Agave to 4 feet tall by 4 feet wide with a dense rosette, rounded in outline, atop a short trunk 1 to 2 feet tall that is usually hidden until plants get some age. The 2 foot long leaves are fairly stiff, narrow (2-4 inches) and concave towards the middle with a broad central band colored pale green and strong creamy white margins that often have a flush of pink. When in flower, which does not occur until this plant is at least 10 years old and often much later, it sends up an 8 to 10 foot spike with a well-branched panicle bearing greenish-white flowers. Though mostly solitary in youth, after flowering this plant often suckers and small colonies can form. Bulbils also form in the inflorescence to help perpetuate this plant. Plant in full sun to light shade and irrigate occasionally to very little. Hardy to around 20°F. This species is one of the most wide ranging of the agave with a natural distribution from Costa Rica in the south to Tamaulipas in the Mexican state of Sonora in the north and it occurs in tropical savannah, thorn forest and drought deciduous tropical forests from sea level to about 5,000 feet in elevation.” 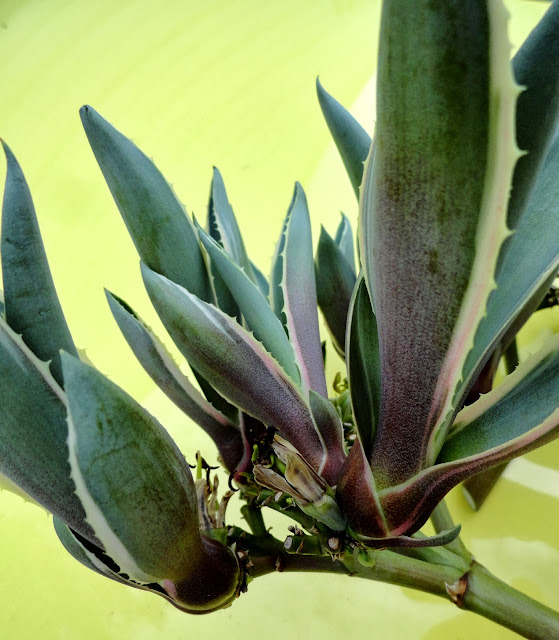 If you look closely you can see a tiny “fresh” flower as well as a faded one. 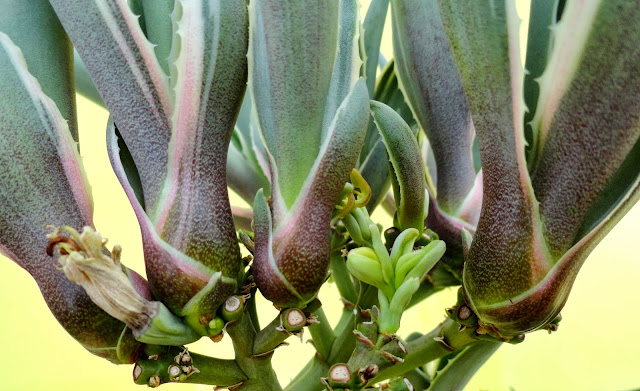 So…I need some advice! What’s the best way for me to root these little guys? I’ve put the two stems in water for now, wondering if maybe they were a little young to be cut away from the umbilical stalk. Will they form air roots? Should I just break off a small bit of stem under each bulbil base and plant that? Those with experience please advise… 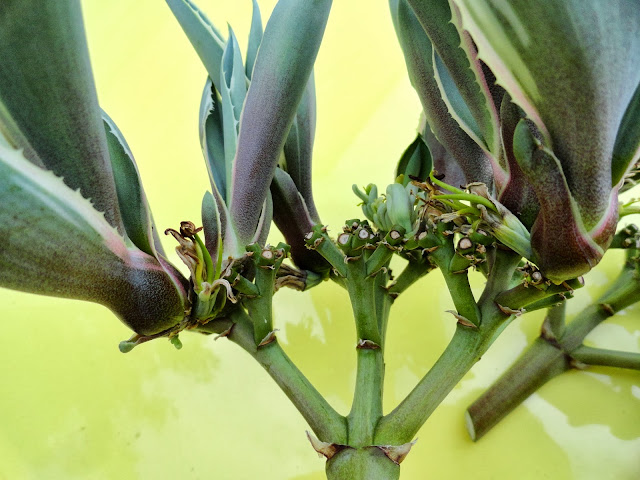