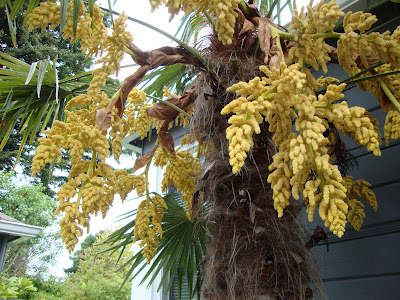 About a year ago our next door neighbor John put his house up for sale. This wasn’t just any neighbor; this was the neighbor everyone dreams of having, the one you have over for dinner or go out for a drink with. The one who picked up the mail and newspaper when we were out of town…and the one who always said yes when we left town and asked if he could throw some water on the plants while we were away (yes! seriously, and he did a damn fine job). So now he was moving away. How could we possibly be lucky twice? Not going to happen. Nope we were doomed to loud party animals with 3 kids, 5 dogs and an RV, things were going to get ugly. 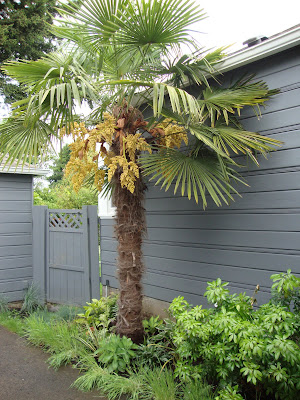 The house sold in a day and a half, and the new neighbors moved in. Right away they ripped out the front and side gardens (I think I even took pictures as it was happening, to blog about it…but never did). Sure it was a little overgrown but there were some good plants in there! And now they were gone….hauled away by a landscape company. Before the house went on the market I had said to John “If the new owners so much as touch that palm!”… it was my litmus test. And guess what, they didn’t touch it! Almost everything around it went away but it remained. That’s when I knew there was a chance I was going to like them (yes I realize I was being a little territorial about something that wasn't even mine...) 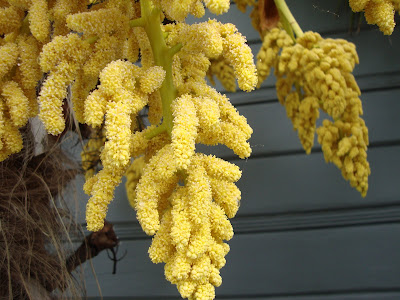 Fast forward a year, I worried needlessly, we got absolutely great neighbors! In fact they broke the pastel neighborhood "curse" by painting their house dark before we did. 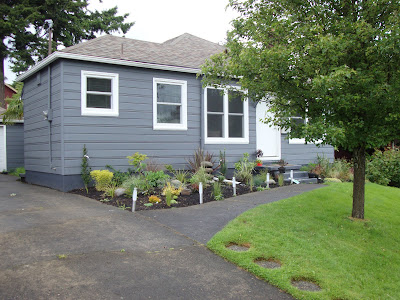 These are the same neighbors that I mentioned bought the blooming aloe a while back, it still hasn’t burst into full bloom, but I get to see it everday! 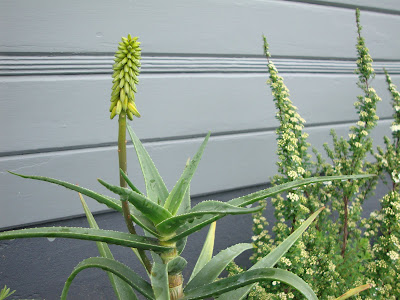 Evelyn and Julia (the neighbors) started replanting their garden last summer, but have added several more fabulous plants this spring. Increasing the connection we feel to this house and its occupants (current and former) is the fact that our homes are exactly the same, different rooflines but the floor plan is the same. We’ve joked that this, along with the fact we are so close together, is sort of like living in detached condos. 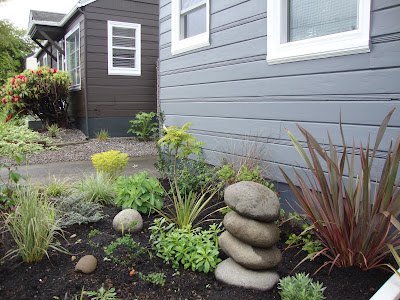 Besides the lust worthy aloe they’ve planted a few other things I’ve wanted in my garden but now I don’t have to make room for; like that gorgeous Phormium in the picture above and this Staghorn Sumac… 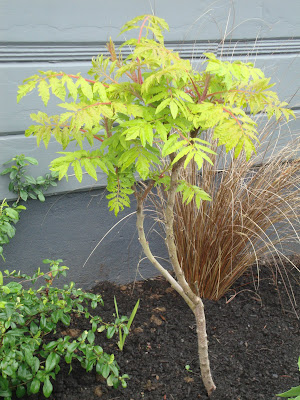 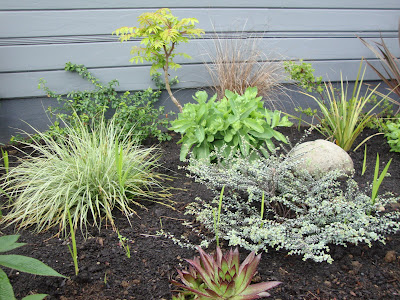 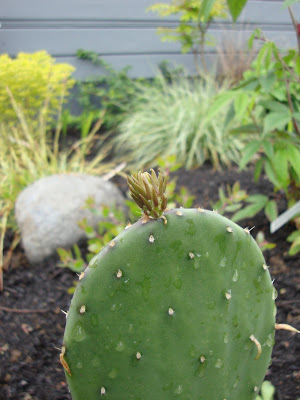 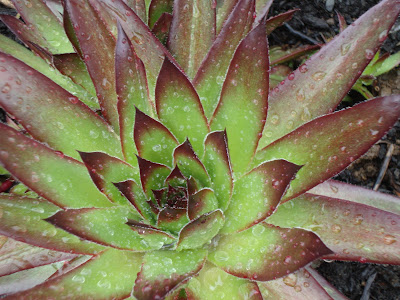 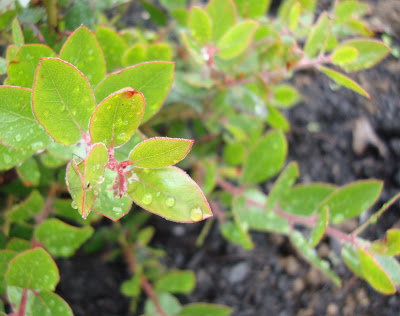 Their Rubus lineatus is much happier (larger) than mine is. They’ve got it in almost fun sun, where as mine is in almost full shade. 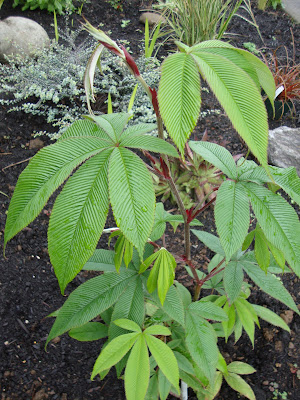 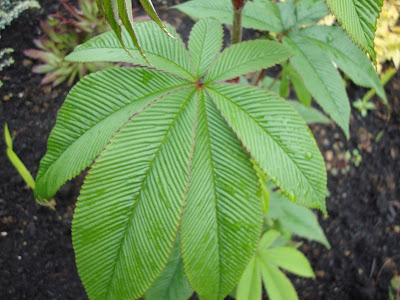 They smartly left the gutter downspout extension to take the rain away from the house and accented the water path with blue pebbles. 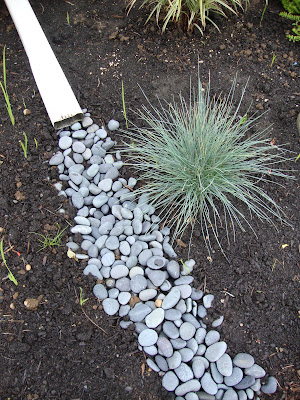 And have a gorgeous Aeonium Schwarzkopf on the front porch. 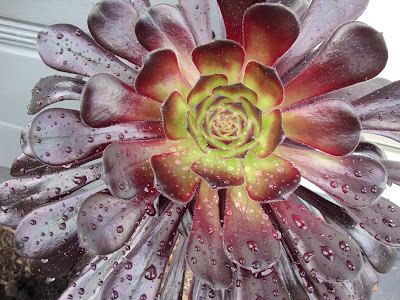 Beside the house under the Palm (you can see it on the far left in this picture)... 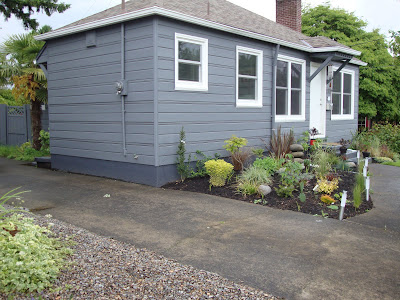 ...are a few other gems, including an Acuba. 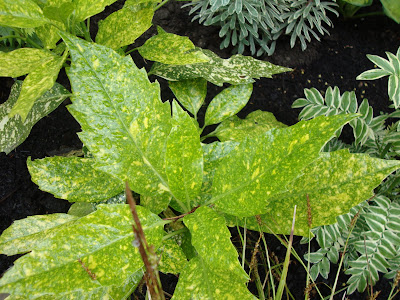 This is the area between the driveway and the house where we’ve got our veggie stock tanks. For some reason this area has been paved over at our place, where as they have a good sized space to plant. I would be jealous except we get to enjoy the view out of our living room window! Ash Leaf Spirea (isn’t it gorgeous?) 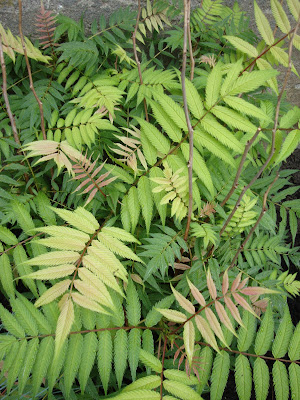 How did we get so lucky as to win the good neighbor lottery twice in a row? 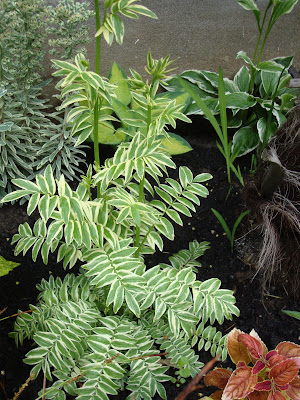