Then and now, the end 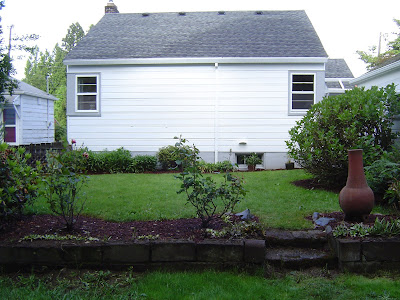 Standing in the lower back yard, looking at the back of the house, May of 2005. I’ve threatened to show movies on the back of the house. It’s such a big blank white wall. In my dreams we install an industrial rollup door with lots of glass, and steps down to the garden. Wouldn’t that be fabulous? To be able to completely open up the back of the house in the summer? Maybe someday. In the mean time I’ll settle for painting and making that wall-o-white go away.

Skip ahead to July of 2007. In this picture you can really see the crumbling retaining wall separating the two levels of the backyard. Judging from the adjacent properties this is original to the house, built in 1948. 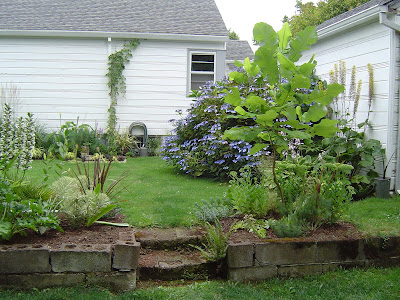 August 2007, preparation for the patio and new wall. Work, work, work. Break out the old wall, dig out the sod, dig out 7” of soil, and bring in sand and gravel and blah, blah, blah. 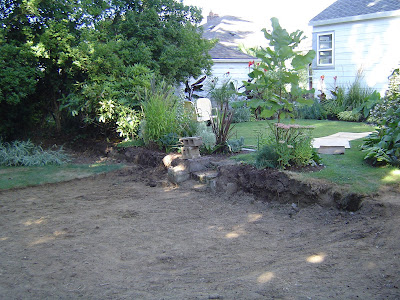 It's still August 2007. The one part of the project that we hired someone else to do was build the new retaining wall and stairs. Totally worth it. Although I was a bit afraid when I came home to this scene… 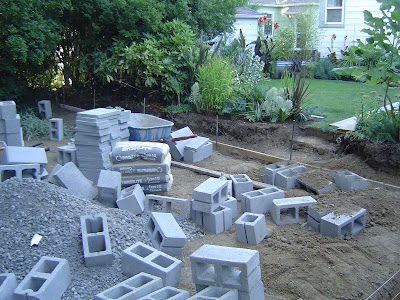 September 2007, wall and stairs done…time for the patio to go in. That vine growing up the back of the house? Breaking up the field of white. Gone. Ya, it was working it’s tendrils under the siding…bad idea! 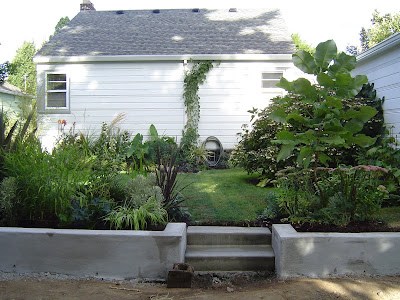 Summer 2008, a picture from the lost year! I loved this picture so much that I luckily I had it on my computer at work. So when our home computer crashed it was not lost. 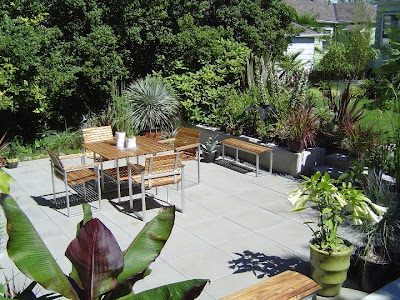 Unfortunately pictures I took this year from this angle didn’t even came close to looking this good. Too many harsh shadows from the new shade pavilion, which wasn’t around when this picture was taken.

If you want to see more on our patio project I went into detail on this earlier post and there more pictures are here. On that note “then and now” week is complete! Thanks for coming along on the 4 year journey...