Pictures I would have included the first time… 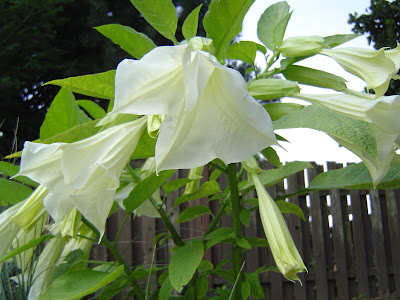 Our sick computer is back from the doc, and most of the pictures were saved (note to self, back up the important stuff)! Today I’m sharing a few pictures that were taken Summer 2008. I would have included these in the original posts on the backyard project, and the front yard re-do if I had them at the time. Hopefully you won't feel like I am just repeating myself, that isn't my intent anyway... 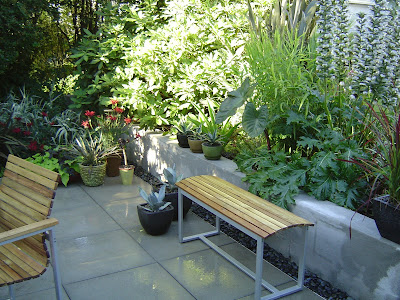 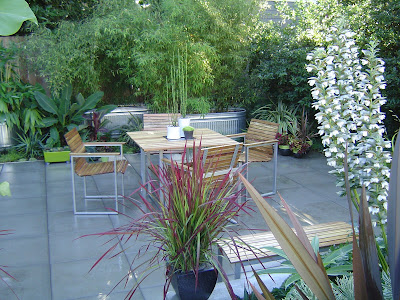 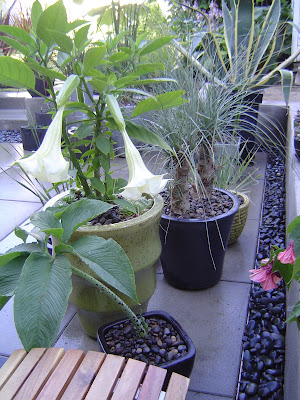 The papyrus does kind of show up, in the shot below, after all (I had commented in a post below that it did not) you can see it in the tall metal pot to the right of the white trumpet flowers. This picture was taken early enough in the season that it hadn’t really got with it. Right before our really late frost (I think it was early December when this one got hit) I cut down all the stalks and put them in a vase, we enjoyed them for weeks. Nothing says Christmas like papyrus right? 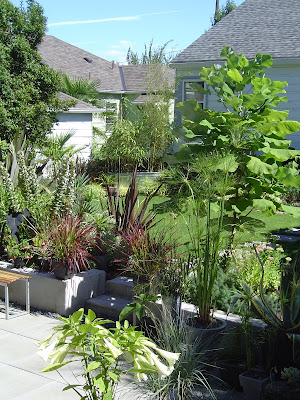 Behind the papyrus you can see Clifford, our big leaved magnolia. We’ve had Clifford for 4 years as of this July. We’re so proud of him growing up all straight and tall. His first bloom will be cause for a huge celebration. Maybe this year? And I know what you’re thinking. Why is a tree planted so close to a wall? Aren’t the roots going to be a problem? Ya. Dumb. I talk to Clifford regularly about the importance of sending his roots down deep rather than out. I think he’s listening. 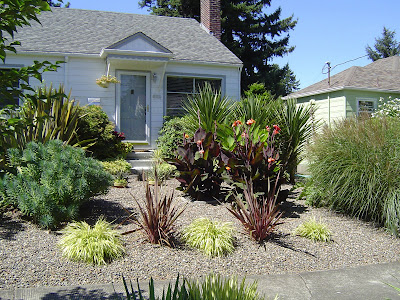 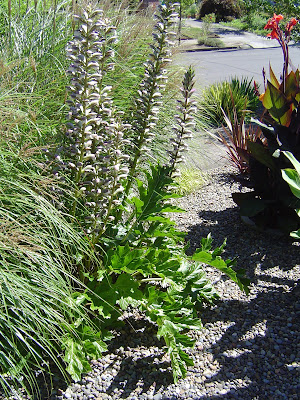 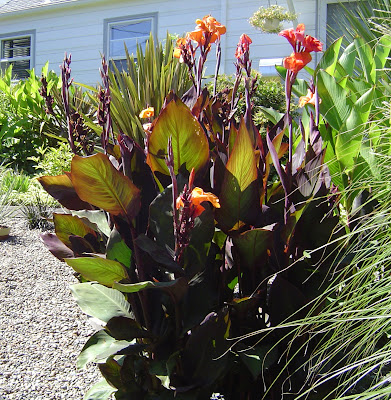 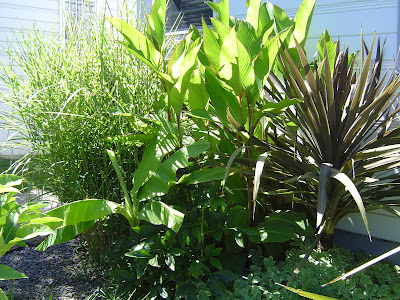 A couple of updates:
There is still no green on my Chinese Yellow Banana that’s it! I’m breaking out the fertilizer this weekend, I should have done this already but I am really bad at remembering to fertilize. I rarely do it. While I’m at it I should also fertilize the hardy Japanese banana which is pushing out huge new leaves, maybe this is the year it finally reaches 10 ft tall?

I walked by the cactus in bondage the other evening. It’s still all tied up and the whole thing is starting to lean to one side. You can see dark spots at the bottom in a few places that look like rot. Things are not looking good.

Still no signs of life from the Elephant Ear. Glad I planted the new ones, and hey come to think of it they aren’t coming up yet either! Maybe there is still hope!