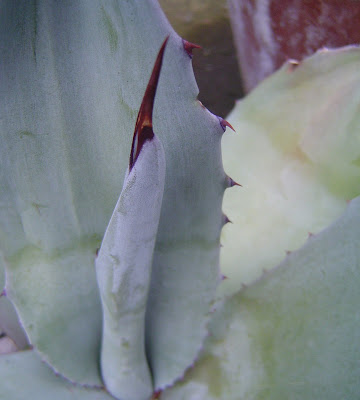 I hate this part.
My agaves and a few other tender plants have spent the long wet winter in the basement under fake sun (grow lights), or in the garage (out on dry days, in on rainy ones). They have become like vampires – put them in the sun and watch ‘em burn. It’s not pretty. The agaves pictured above, and below, get the garage treatment. They are from my in-laws place in New Mexico, they don't mind our winter cold but the rain will rot them. I've planted them in a mixutre of soil and chicken grit to they are pretty free draining. I just hate taking the chance of killing them. 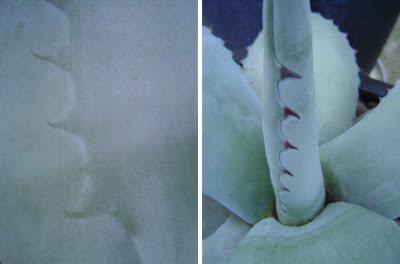 This is the time of year I slowly introduce them all to the sun all over again. I try to time it so they get a few party cloudy days before a full sun bake. Or I move them around the yard so they’re in and out of the sun throughout the day. For the most part I do a pretty good job. But every once and awhile I forget about them, or I go off to work and what was supposed to be a 70 degree, party cloudy, day turns to 85 and full sun. And I come home to a bleached out aloe or a formerly vibrant coleus that now looks more like the leaf on the right rather than the ones on the left. This was the first year I’ve overwintered a coleus, but this one had huge leaves and such fabulous color that I though I’d give it a try (funny the same color in a bloom would make me run from the plant – but on a leaf, cool!). Other than its new 'sunburn' it came through ok. 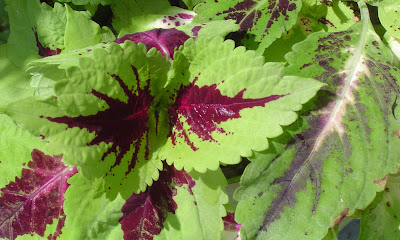 Currently I am working to acclimate the agave attenuate (below), I don’t want to screw this one up – its leaves are so beautiful! I l think Lila thought it was a big flower, that’s her nose coming in for a sniff in the lower right corner. 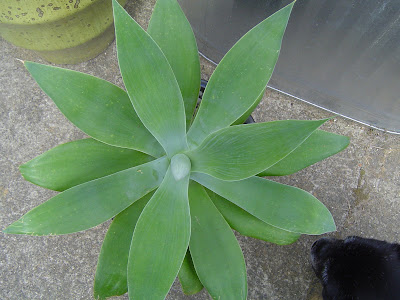 Okay back to the vampire part…anyone think the first image at the top of the post looked like a finger? A long creepy vampire finger with a spiky dangerous finger nail? …ok maybe I watch too many vampire movies.