Future home of the Shade Shack 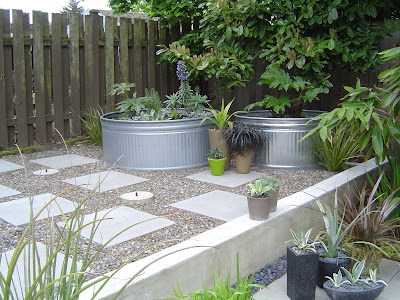 After being asked to count the number of stock tanks in the danger garden (yikes!…nine!) I realized that my camera has always avoided the area south of the patio, the future home of the shade shack, where the two round tanks are.

The Gunnera, which has suffered through two summers in a too-small container, now finally has room to grow crazy in the smaller tank. My hope is that if I can keep the soil sufficiently moist in the tank he’ll think he’s pond side somewhere. The larger tank has a couple of Tetrapanax papyrifer, a Datura, and 2 different varieties of Echium and lambs ear as a textural ground cover. The glossy green leaves hanging over the fence are Laurel. 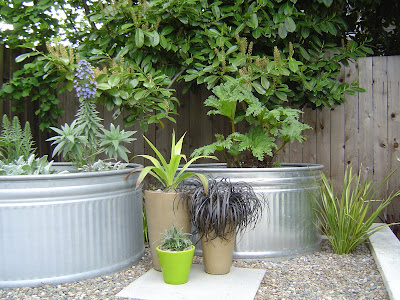 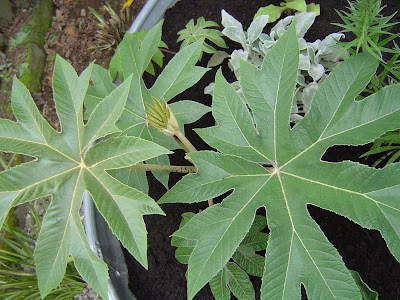 Below is the reason why I avoided this area. You know how when you have a big project going there is that one area that is just ignored? Where all the trash and ‘extra stuff’ goes? Well that is what this area was for us during the patio project. We had to excavate about 7” of earth for the patio and it all ended up here. It’s the big pile on the left. The pile on the right was left over from our front yard project the year before. We’ve moved a lot of soil around on our little lot! 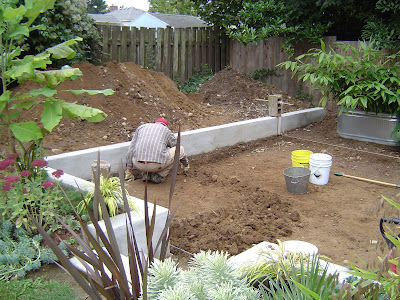 After much labor (and beer) the pile was moved from the back to the front to fill this 10 yd drop box (plus a couple of truck loads) and be hauled away (about this same time last year...judging by the Euphorbia). Yea! No more big eye-sore in the back yard! 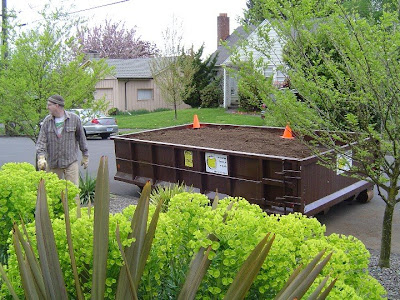 We originally planned to just put gravel down in this area but had a few slabs left over from the patio and path so we decided to use them. I love the random checker board look we ended up with! Ignore the two ugly fences, I try to. They are the neighbors. As a friend pointed out, at least they are plain. They could have lattice or something hideous on them. I HATE lattice. 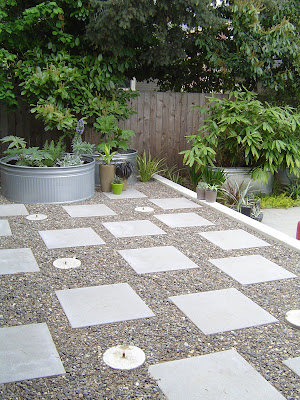 You can see the bolts in the cement footings where the shade shack will be going up. We’ve got the wood all cut, drilled, a coat of primer on and have even done a “mock build” at the Schoolhouse Electric factory that Andrew runs (our out-of-the-weather place to work on it during the winter months). 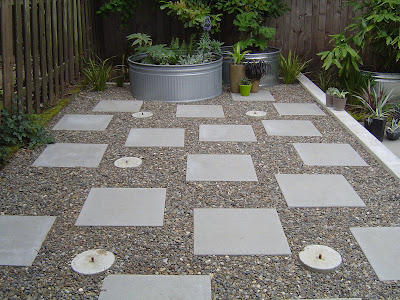 The shade shack project has gone on hold while Andrew finishes his artwork for the June show but after that, we’re back on it, I can’t wait! And guess what…it’s going to be orange! With a corrugated metal roof, fun!