Inspired by the Forest, and Françoise

Readers familiar with my love of moss might wonder if I bring bits home from our treks out in to the forest. Yes, occasionally. I adhere to a simple code of my own ethics though, only taking a little of what has fallen to the ground underneath trees—never picking it off of, or out of, spots where it's clearly growing.
—and—
I adore the work of floral designer and all around creative human, Françoise Weeks. She regularly shares inspiring pieces on her Instagram page and after lusting after one of them recently I was inspired to grab some of my stash of upcycle and plant rusty pieces, some moss, and see what I could create... 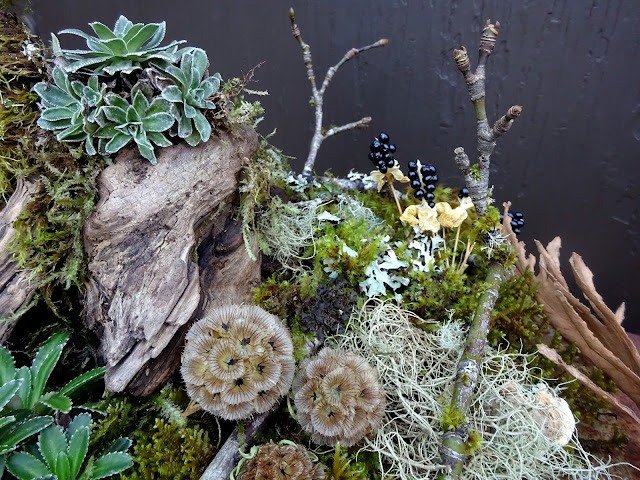 I should also mention whenever I walk I pick up interesting twigs. Trips to the shore means driftwood, and seedpods and bits from the garden are frequently stashed away. All of these treasures were called into action for this arrangement. 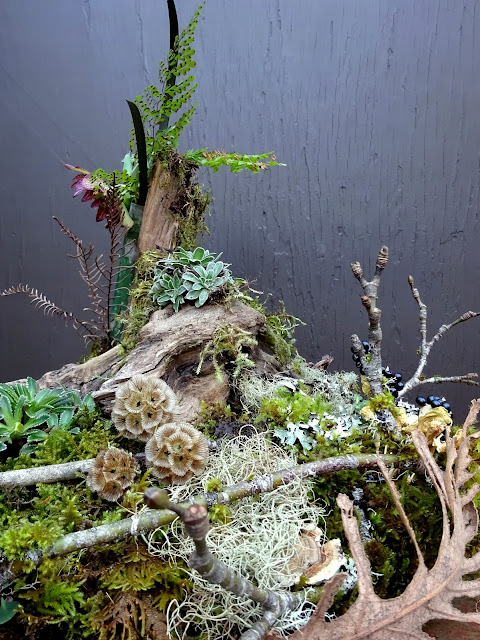 The base is a rusty plough disc setting on a metal spacer Andrew scored for me (visible in future photos). 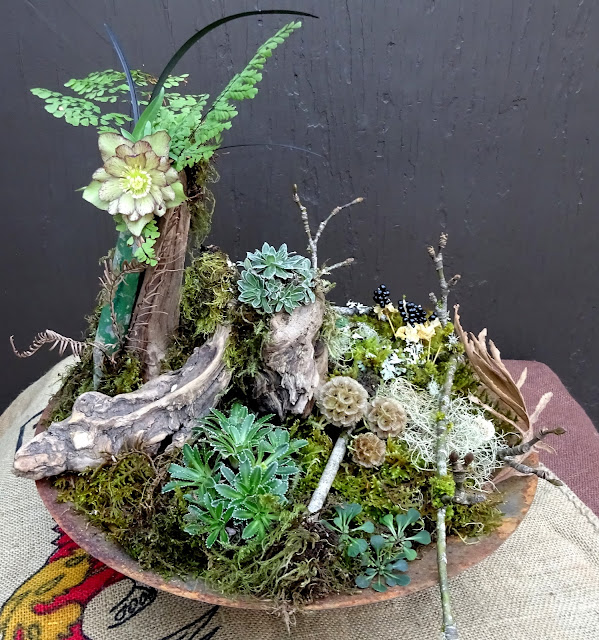 I also added a wonderfully patinaed metal floral tube (vintage) I bought from Christianson's Nursery at the Northwest Flower & Garden Festival back in 2017. Into it I tucked a bloom from Helleborus x hybridus 'Jade Tiger' along with a few black mondo grass blades and fronds from Adiantum venustum. 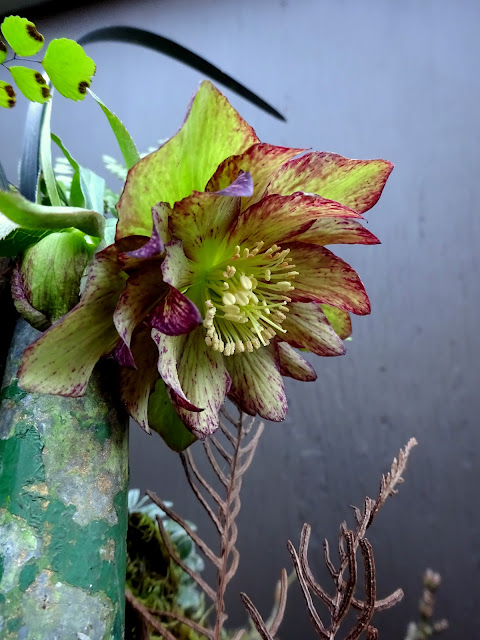 I attached the metal tube to a piece of driftwood. There are three separate driftwood pieces, but it's hard to tell where one ends and another begins. 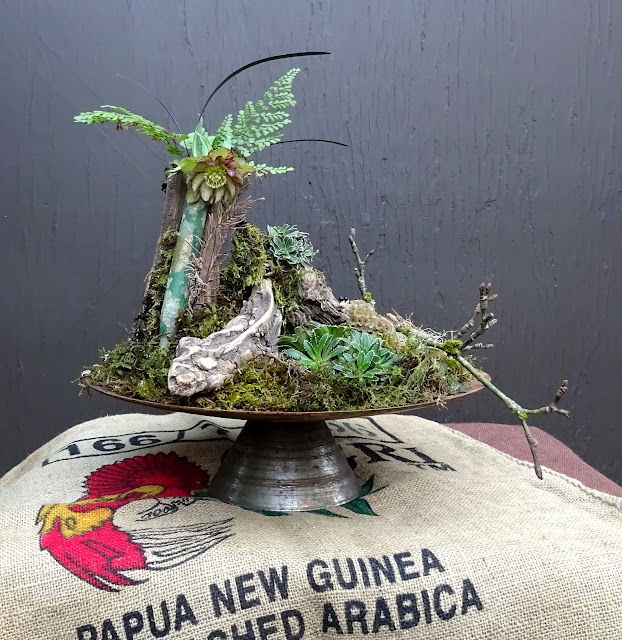 Dried fertile fronds from a Blechnum spicant (deer fern) are tucked in next to the floral tube. 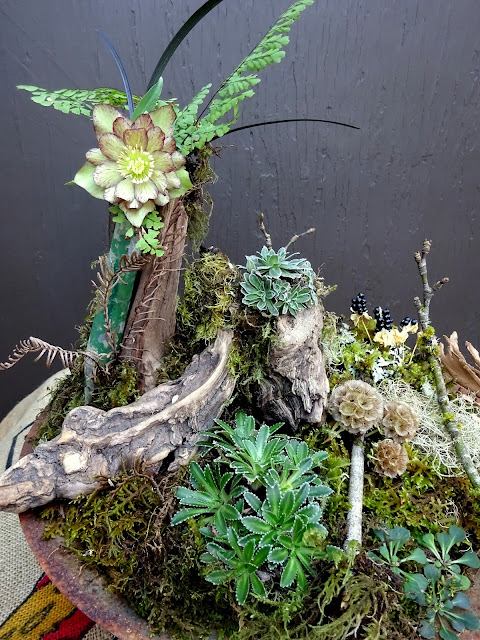 Planted into one of the chunks of driftwood is Saxifraga x macnabiana (small leaves), and beneath that is a Saxifraga x longifolia hybrid (larger leaves)—both purchased from Joy Creek Nursery last fall. The other saxifraga pieces you see were plucked from around the garden, the scabiousa seed pods were saved from a bunch I bought as fresh cut stems at the flower market months ago.
A dried leaf from my cut-leaf emperor oak, Quercus dentata 'Pinnatifida’... 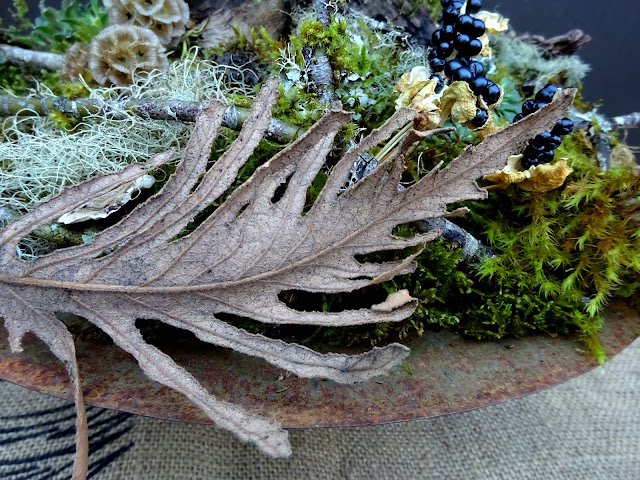 My Nashville in-laws sent a bag full of Iris domestica (blackberry lily) seeds that I've been hanging on to because they seemed too pretty to hide in the soil. 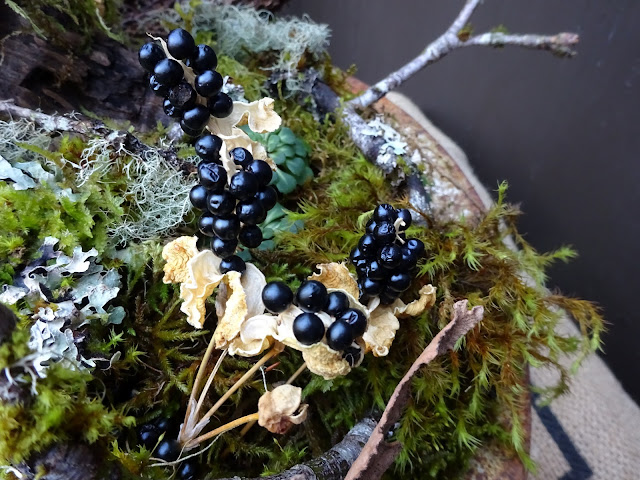 Speaking of pretty, lichen growing on moss is pretty fabulous. 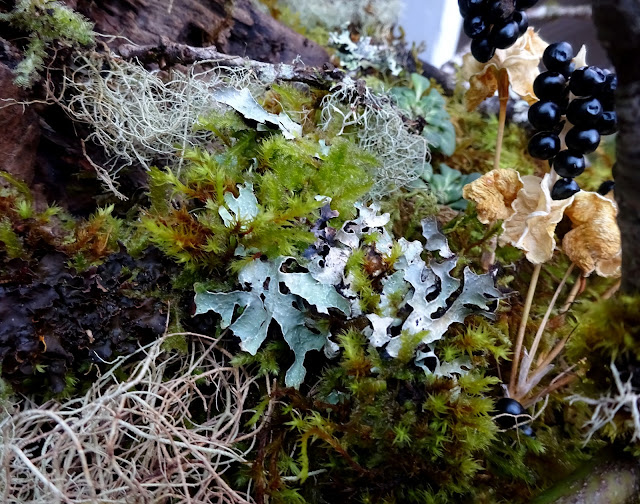 Dried fertile fronds from Matteuccia struthiopteris (ostrich fern) were tucked in under another group of those glossy black seeds. 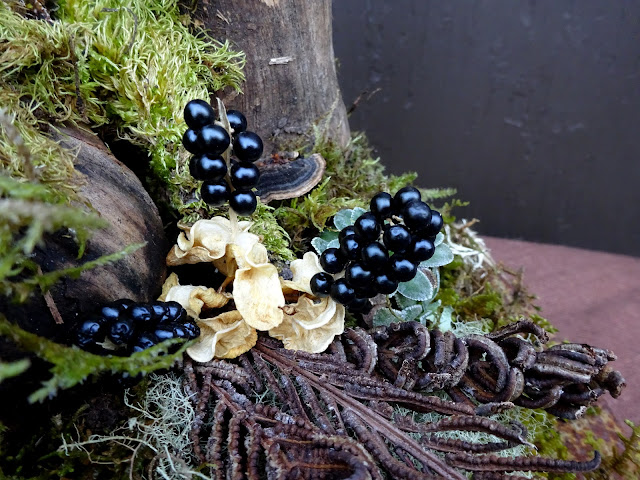 I put this whole thing together on a dry, but cool, afternoon—working into the fading light. I wasn't sure I'd feel like it was complete, before I was forced to stop. Thankfully it all came together as I had pictured it in my mind and I even had time to take this photos before it got dark. 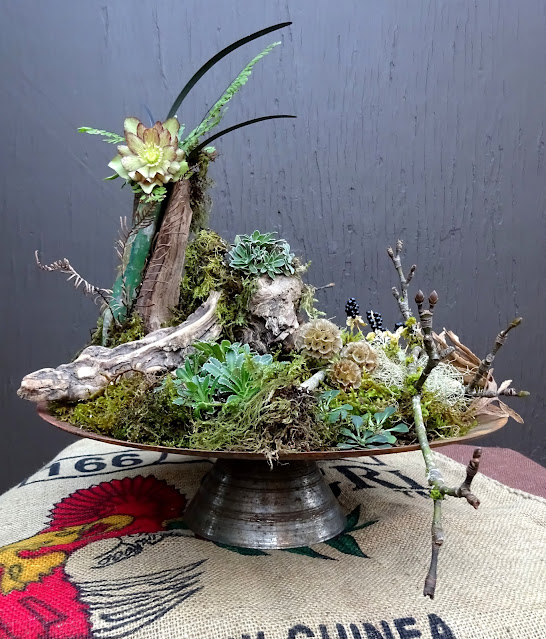 This piece would be happier outside, but then I wouldn't be able to see it as often—so it's currently sitting on our dining table. 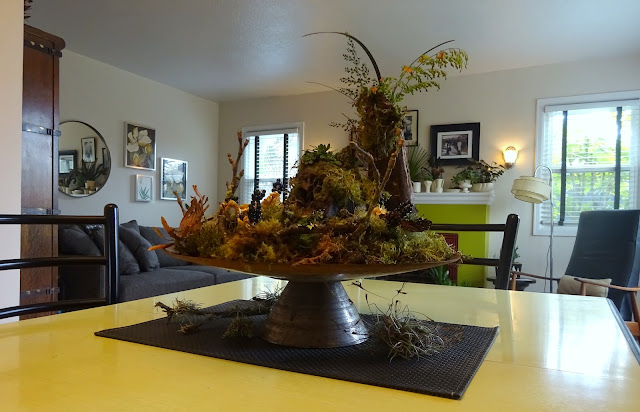 I give the saxifrage  an occasional drip of water and mist the moss a few times each day. So far—it's been a week and a few days—everything is staying fresh. 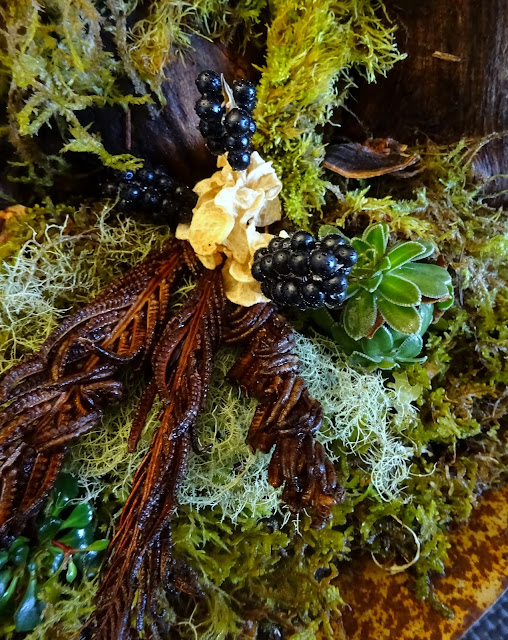 Since it's been indoors I've also tucked in a few more things, like a skeletonized leaf (Magnolia laevifolia I believe) from the garden and the seedy stems from Anemone 'Honorine Jobert'. 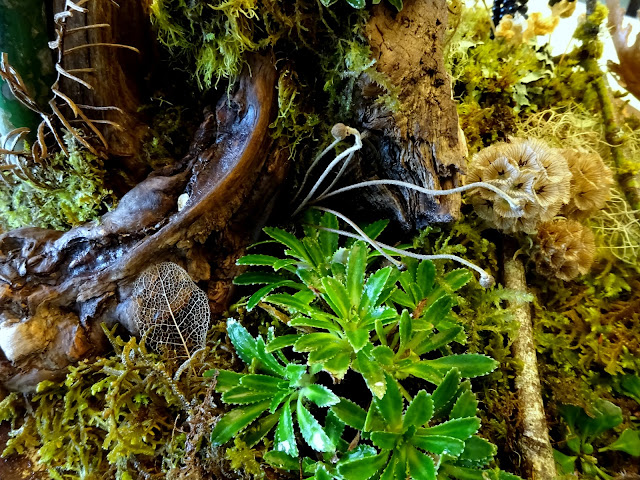 It makes me smile every time I see it... 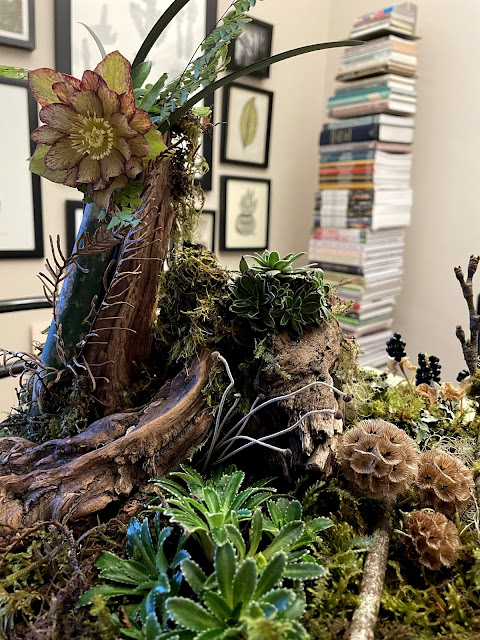 Labels: Ferns, in a vase on Monday, moss, Saxifraga, seeds, upcycle and plant