My most vivid memory from my 2018 visit to Austin, TX, was the agaves. Huge agaves, flowering agaves, agaves of every size, shape and color—agaves everywhere! Last week I returned to Austin, going-in I knew there were going to be fewer agaves, February's horrid cold turned many of them to mush. I was prepared to be agave disappointed, but you know what... that wasn't the case. There were still many fabulous agaves to swoon over. Not as many as before, but gardeners are planting more of the the ones that did make it, like my beloved Agave ovatifolia. Yay!
What I wasn't expecting to see however were ferns. I was in Austin to give a talk as part of Pam Penick's Garden Spark series and I'd hesitated to include image of ferns in my talk, however in the few gardens I visited I saw several... 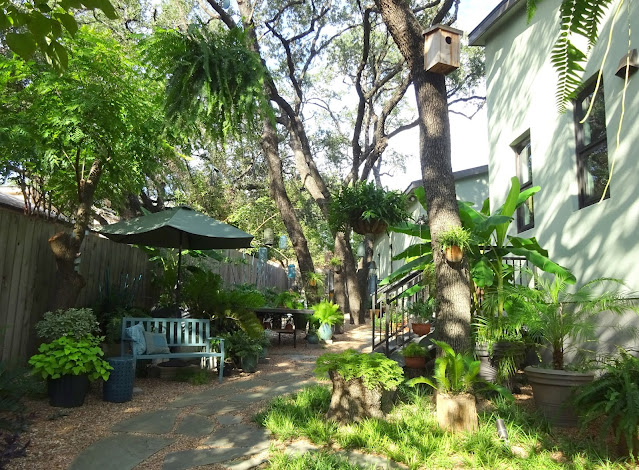 The day I flew in (Tuesday) Pam picked me up at the Austin airport and we headed down to San Antonio and Linda Peterson's amazing garden. I've got many more images of this garden to post but today I'm sharing her stumpery. Yep, that's exactly what she called it, with a chuckle. Above is an overall shot. Below one of the stumps, although I don't think that plant is technically a fern. I could be wrong, but I think it's Pilea microphylla—which does go by the common name artillery fern, even though it's not a fern. 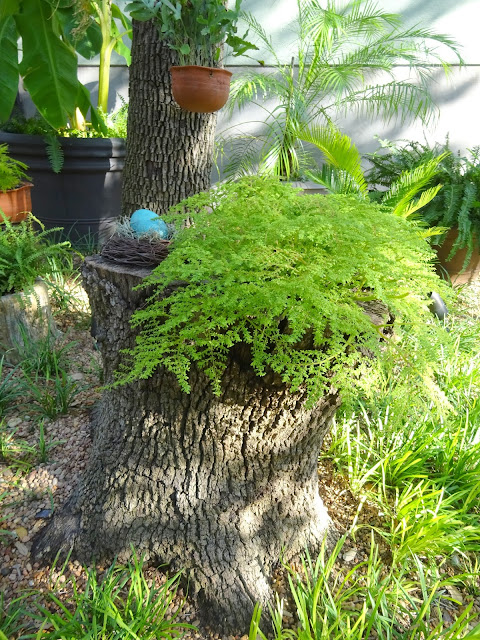 It's a heck of a stump though! 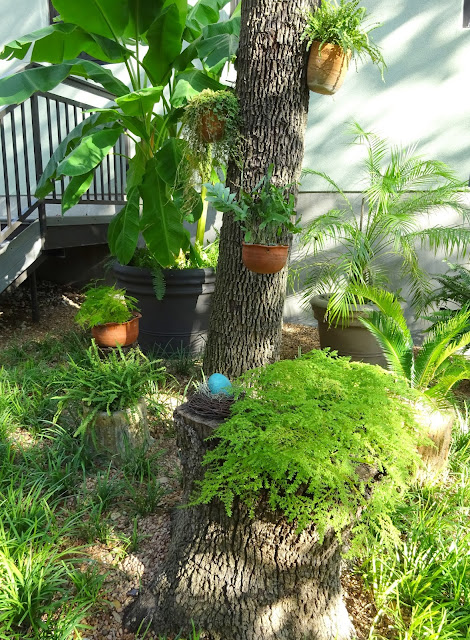 I think this one may be a button fern, Pellaea rotundifolia or maybe Nephrolepis cordifolia Duffii. What I don't know about ferns is a lot. 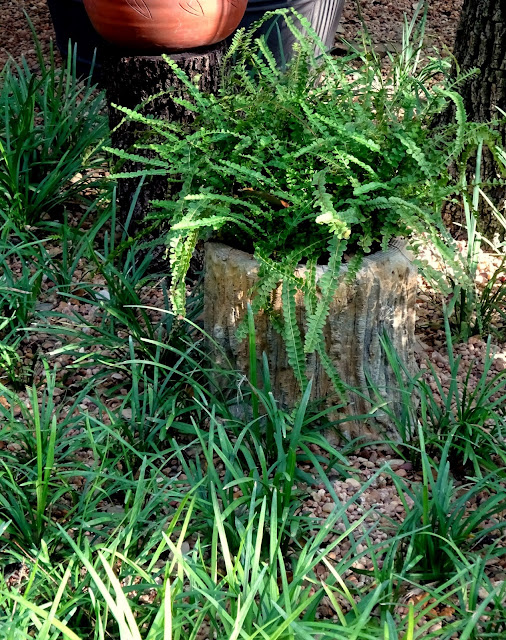 Isn't that work space absolutely divine? Don't let it distract you from the ferns however. there are several. I was most taken with what I think might be Pteris cretica 'Albo lineata' (White Striped Cretan) on the left. 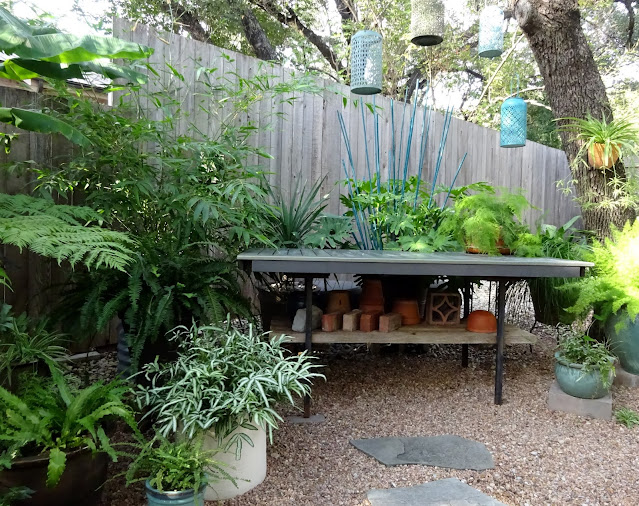 Back at Pam's place I came up empty in my hunt for a fern (and forgot to ask her if there were any I missed). Cosmo was able to point me to these metal fronds though, smart dog to recognize a fern when he sees one! 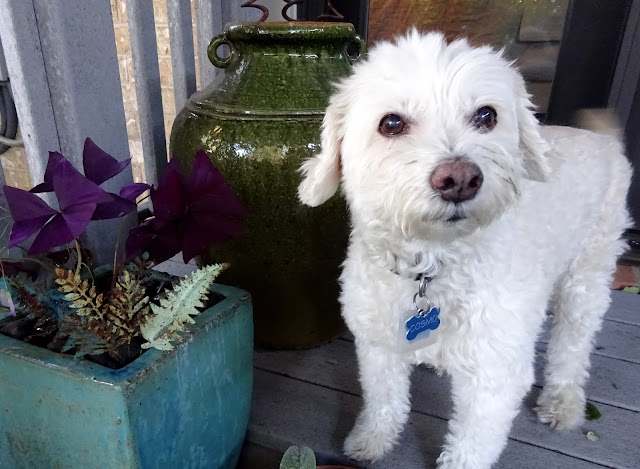 Wednesday we visited the John Fairey Garden, walking through this shady area my eyes were completely focused on the sunny garden beyond... 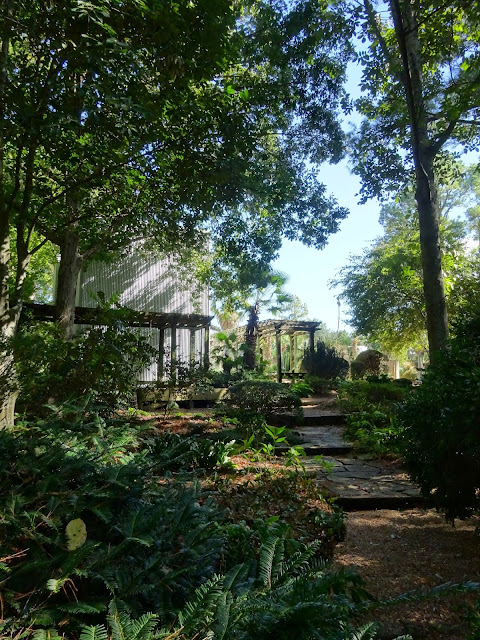 Thankfully I looked down and saw (OMG!), pyrrosia! 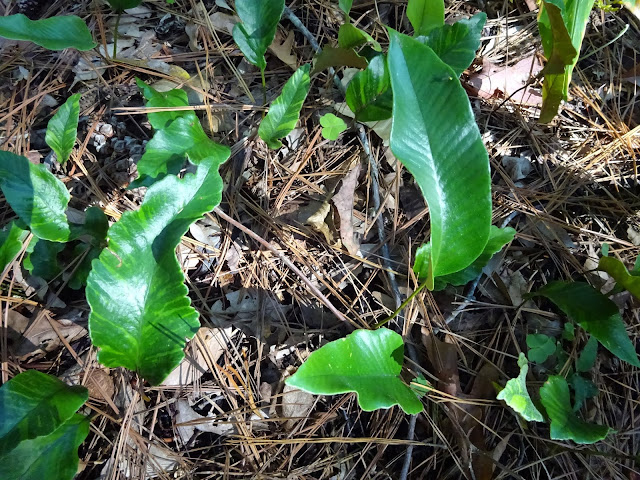 Y'all know I am a freak for pyrrosia, so this was a thrilling moment. I also had to stop to consider that this garden is much closer to Houston (and it's humid subtropical climate) than it is to Austin, then it gave me pause to think of these same ferns growing in my summer dry garden. 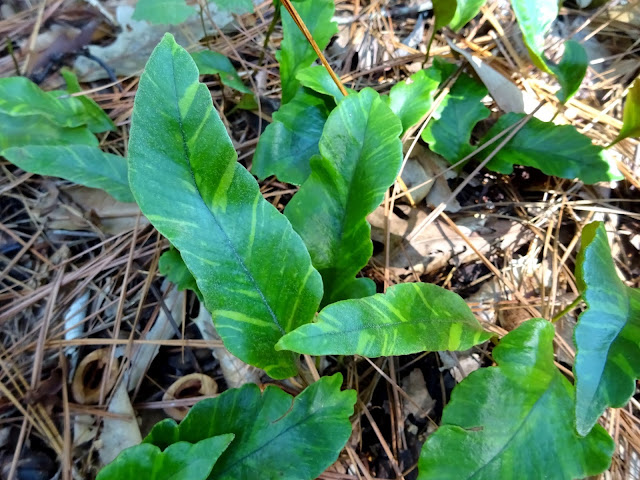 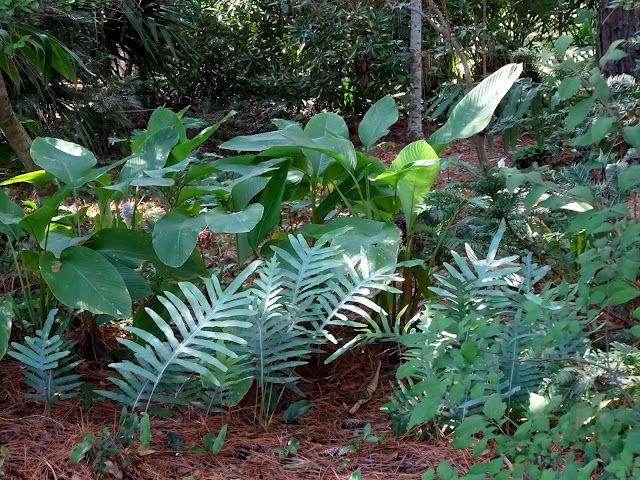 There was fungus too! 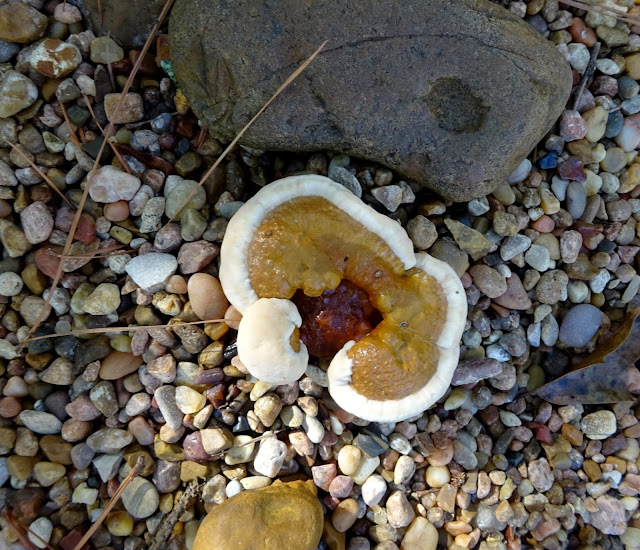 Ferns and fungus, I can't help but think the two go together, but of course not always.

A maidenhair of some sort. 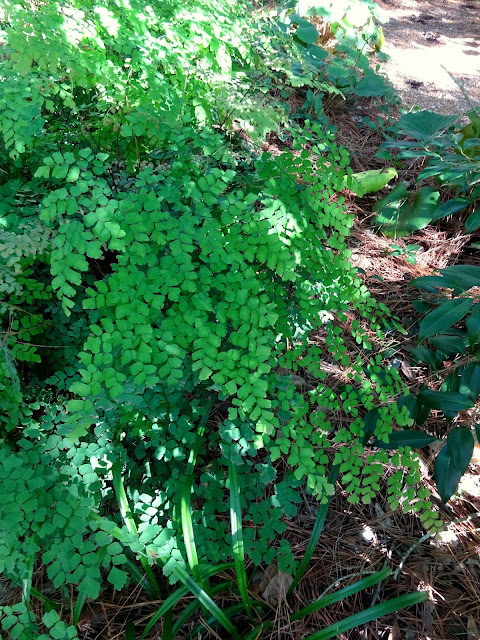 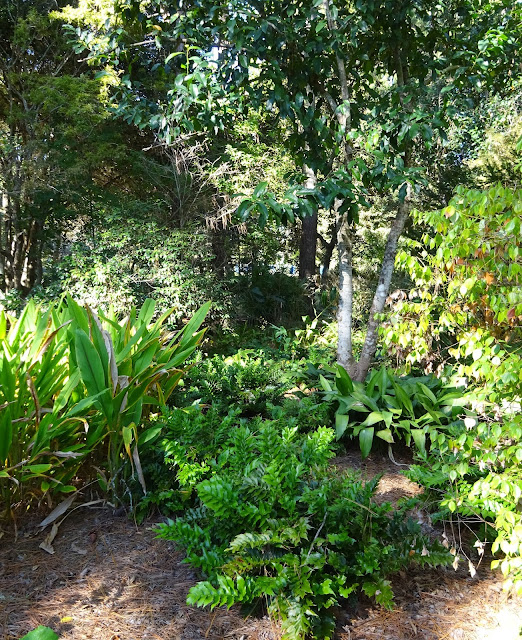 As I mentioned earlier the reason I was in Austin was to give a talk and the location at Barton Springs Nursery could not have been more beautiful. I owe Pam a thanks for taking this photo and sharing it with me... what I want to call your attention to are the two ginormous hanging staghorn ferns to the left of where I'm talking up on the stage. They were AMAZING! Even though I admired them, I didn't take my own photo of them—I was too focused on the talk. Oh well... 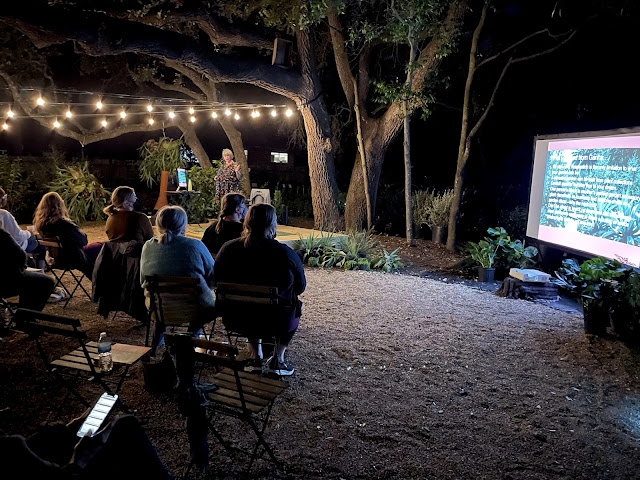 My final garden visit of the trip was to the Lady Bird Johnson Wildflower Center. I'd been there once before, during the Austin Fling, but that was an extremely rainy day (back then I posted a rainy video to Instagram). It was nice to walk about this time without the threat of being drenched. Plus I got to see the wavy scaly cloakfern and learn it's native to Texas. 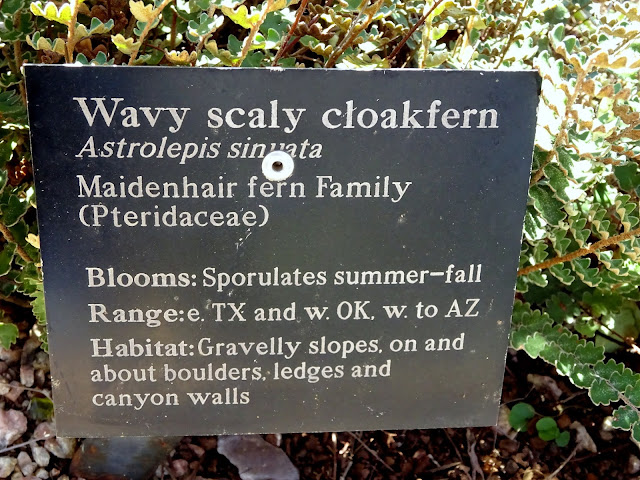 I have a couple growing in my garden but they don't look this good. Poor things don't get much summer water here in Portland, where as they do in Texas. I must remember that.

So there is a reason I'm focusing on the ferns I saw in Texas, and it's not just because they're cool. Nope, it's because I want to encourage those of you who are into ferns to join the Hardy Fern Foundation. When I first joined I wasn't sure what they were all about. Since they're based here in the PNW I figured it might be a locally focused group—thankfully I was wrong. They draw members from everywhere (I've heard a few far reaching friends comment on Zoom webinars, like this one in Wisconsin), and they've got an upcoming webinar on none other than...(drumroll please)...ferns of Texas! You have to be a member to register, but membership brings so many benefits! 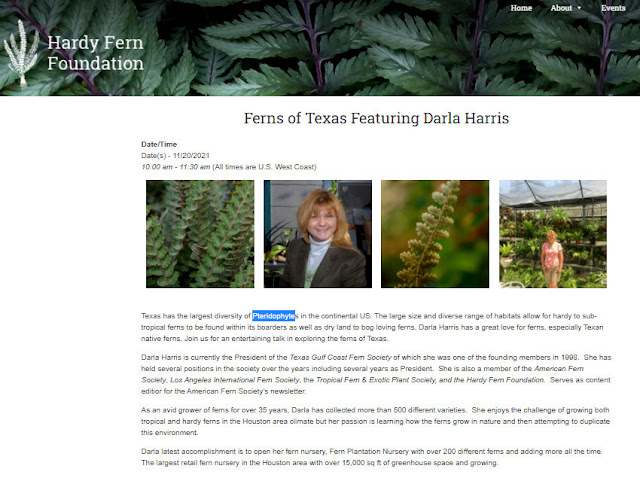 I love to learn more about plants I love that are growing in other parts of the world, especially where I've visited. I'll definitely be tuning in for this one. Oh and don't you worry, I got a lot more Texan garden goodness to share with you too!
—   —   —
All material © 2009-2021 by Loree Bohl for danger garden. Unauthorized reproduction prohibited and just plain rude.