A few things I learned from breaking an ankle at the height of gardening season...

It's been seven weeks since I listened to those of you telling me to go get my ankle checked—that it might have been more than just a sprain. Which of course it was.

It's been seven weeks since I've been able to put my left foot on the ground and walk. It's been just under six weeks since I had surgery, a metal plate and nine screws attached to my fibula.

Yesterday (my birthday), we had an appointment with the orthopedic surgeon and I got the thumbs up to start putting weight on my leg (slowly, wearing a walking boot, using a crutch) and to begin physical therapy. Baby steps, but still the best birthday present ever.

If you'd have told me that during the time I was unable to walk that Portland would experience a record breaking heatwave with temperatures unlike anything we'd seen before—records of 108, 112, 116—I probably would have cried. In retrospect I still can't quite believe that I was out there in that heat, with the lower half of my left leg in a cast, attempting to get around on a knee scooter watering my garden like a mad woman determined. But I was, and my garden came through without too much damage.

Here are a few things I learned over the last six/seven weeks:

But it wasn't all bad! For example I learned that my front garden really is drought tolerant summer dry adapted and able to withstand extreme heat. I also learned that I have an an amazing network of gardening friends here in Portland.
The day I came home from getting the broken angle "surgery required" diagnosis I freaked out and posted on Facebook asking for help with watering. I wasn't thinking clearly, I was afraid I wouldn't be able to do that most basic and important of tasks. The response I got from friends offering help was nothing short of extraordinary. I was (and still am) in awe of how kind everyone was.
My panic then morphed into the stage where I realized all the work that I enjoy (or mostly enjoy) doing in the garden wasn't going to happen. Trimming, mowing, edging, clean-up, regular garden maintenance wasn't going to be possible (not to mention all the creative "designy" things I love to do)—for almost two months! A new level of worry ensued. Several friends were ahead of me on this and offers of help, and names of those who could help started rolling in. That's when a message from Tiffany at Quick & Dirty Gardens showed up: "Word on the street is you have a booboo. How can I help??" I'd met Tiffany a few times already and I knew she'd helped out in the garden of my friend Linda Callahan. Tiffany ended up becoming my garden angel Wonder Woman—note the headband on her straw hat, that's no accident!... 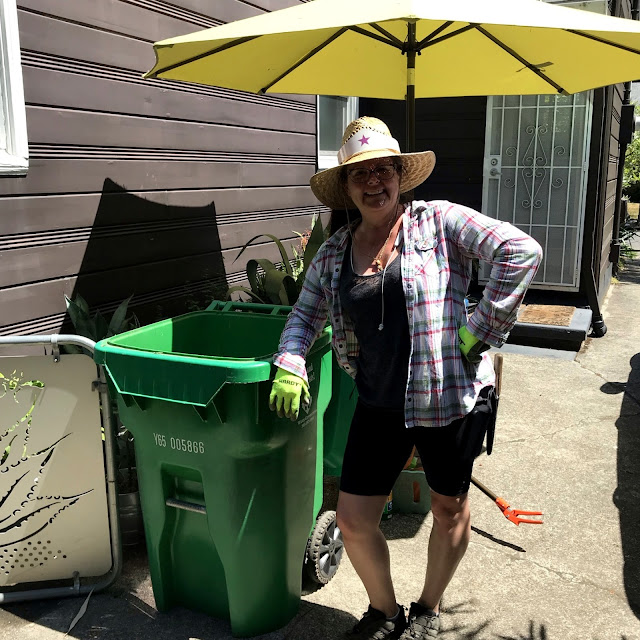 Those of you who know me know I'm a bit of a perfectionist when it comes to my garden, it's also a very personal space. I could never have imagined it would feel so comfortable having someone else here, working. Tiffany made it so easy. On more than one occasion she tended to something in exactly the way I would have done it, without my even asking. Damn. So that's the last thing I learned, good gardening help is a blessing.
If you're a Portland area gardener I definitely recommend Tiffany for garden consulting (new house/new gardener), as well as expertly maintaining established gardens. She has a degree in Horticulture and 20 years experience gardening professionally here in the PNW. In her "free" time it's still garden focused as she volunteers at Portland's Japanese Garden and spends time out in the wild hunting mushrooms. She also has an Etsy shop where she sells handmade masks, bags, headbands, macrame plant hangers, houseplant poles, and more. She says the best place to connect with her is on Instagram, you can also find her on Facebook.
Meanwhile I will be slowly getting reacquainted with my garden, on my own two feet...
—   —   —
All material © 2009-2021 by Loree Bohl for danger garden. Unauthorized reproduction prohibited and just plain rude.