Where's my towel? Cause I'm throwing it in—right after I dry off my arms. The raccoon bastards win. Well, I'm assuming it's the raccoons, because it happens at night. I've seen squirrels do a delicate balancing act on the side of the stock tank to drink, and I suppose one could fall in and make a grand mess trying to get out, but at night? Anyway...

I walked outside one morning last week and glanced at the tank to see this... 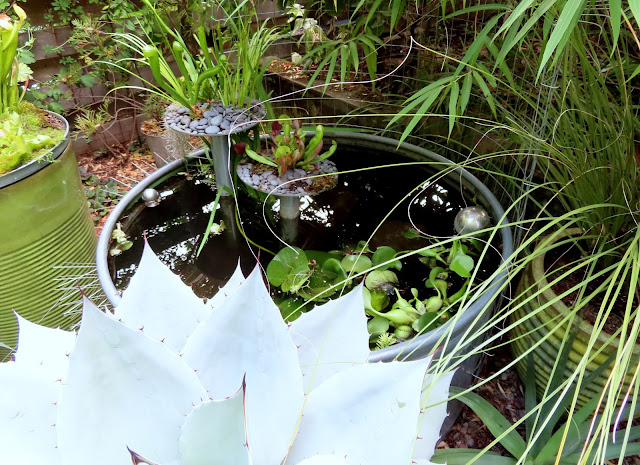 That tangle of leaves should be all across the top of the water, not just on one side, and they shouldn't be a tangle. Every plant had been knocked off the cement block they rest on, and thoroughly thrashed in the process. 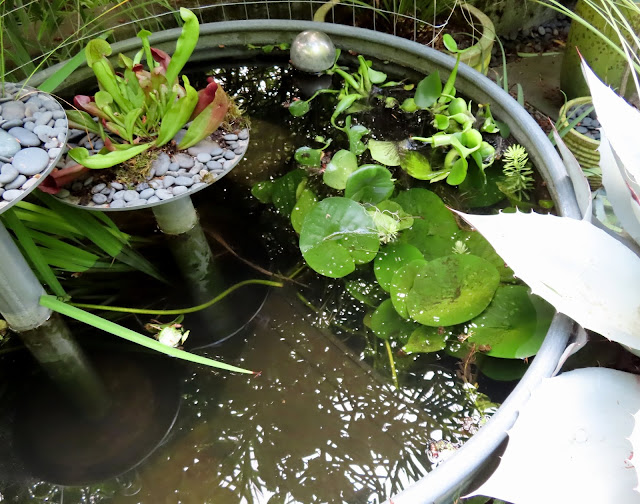 The water hyacynth were looking so fabulous, now they're just torn up bits. 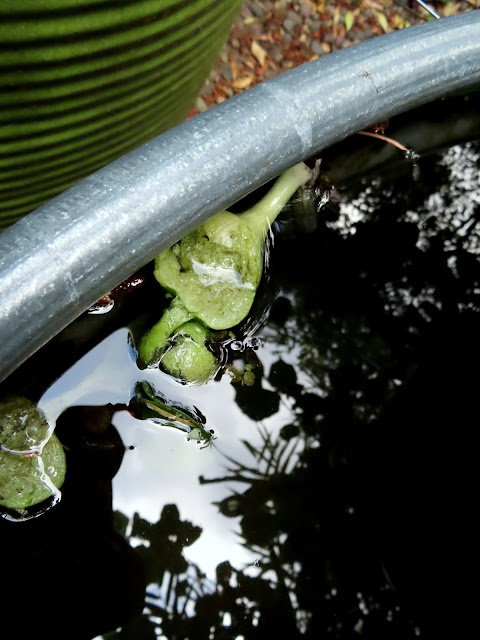 As were a lot of the water lily leaves and once again, the buds have been separated from the plant. Blooms in the making that are gone. 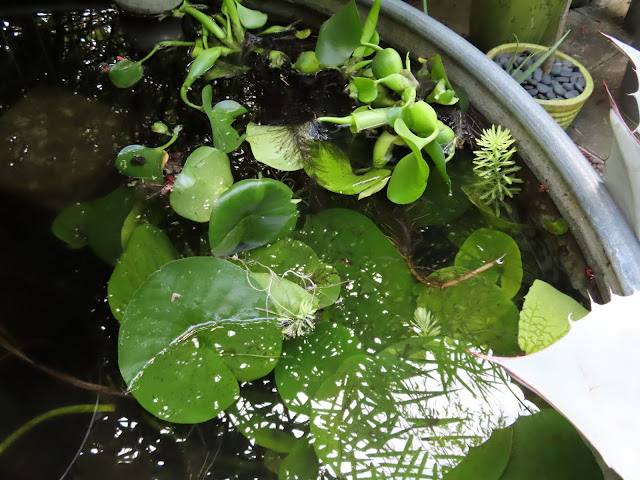 I've taken so many protective measures to keep those buggers out. There's a fence panel along the backside of the tank that's near our cement wall, a few lengths of metal spikes on the side, and the only plants nearby are agaves. Agaves that should bite back. 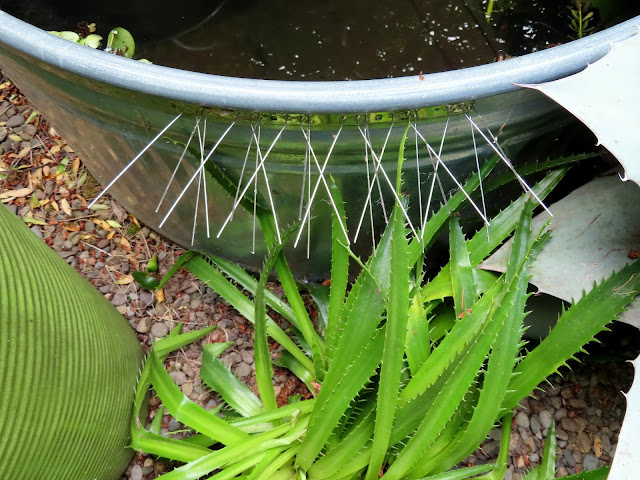 But sadly were bitten. Seriously? You had to go and rip the cuticle? This leaf is toast now. 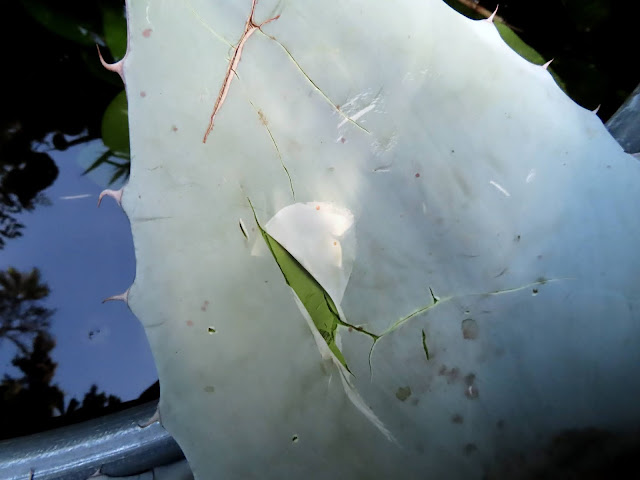 Somehow the two dish planters I have in the tank remained upright (they've got a cement shoe, a treatment I'd like to use on the raccoons) but the soil was dug in. 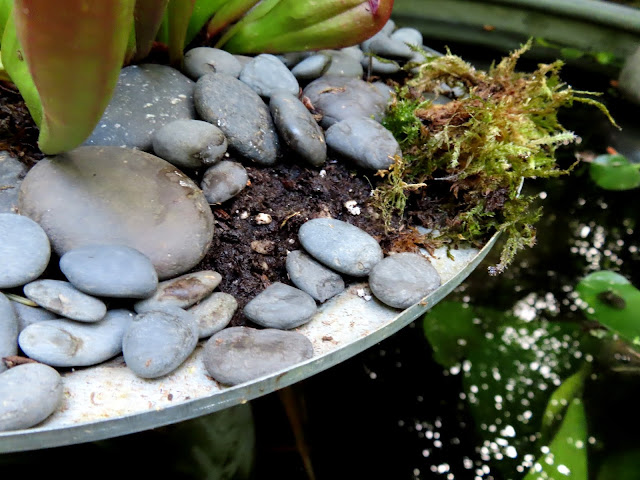 I originally topped these dishes with moss, but the birds loved to steal that, so I removed most of it and put down a layer of rocks, which worked until now.

So back to the part about throwing in my towel. This is not the first time the tank has been raided this year, despite my deterrents. The most irritating thing—besides the torn up leaves and blooms—is having to feel around in the water for the plant pot and get it back up on the cement block that keeps it at the right level in the water. Of course the gravel on the top of the pot, which keeps the soil from billowing out into the water, is gone so the water gets cloudy. I like having the tank for water plants but I think from now on I'm going only with small leaved floaters, nothing for those furry jerks to get in and tear up. 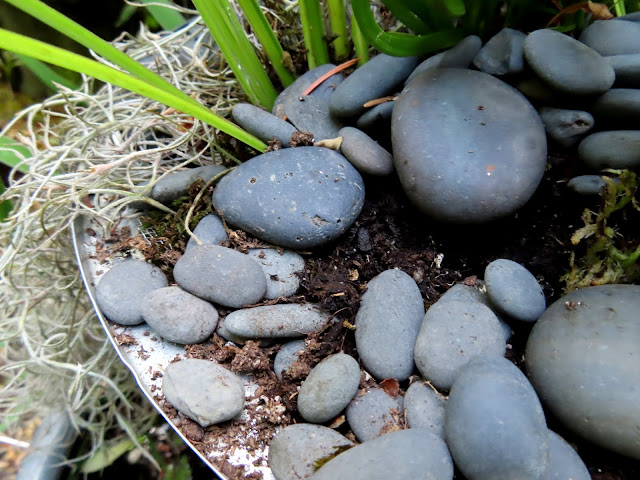 Since I had the camera out to document the pond destruction, and I was now in a mood, I kept going on the "Tell the Truth Tuesday" theme. Back when she was blogging Alison (Bonny Lassie) came up with the idea to share photos when we felt "Oh Hell, that area of my garden is getting me down" calling it Tell The Truth Tuesday, an opportunity to "Tell It Like It Is." So much of social media is just sharing the pretty parts of life. Lord knows gardening has plenty of not so pretty bits, right?

Like the fact my Onoclea sensibilis (sensitive fern) decided they were done with it. 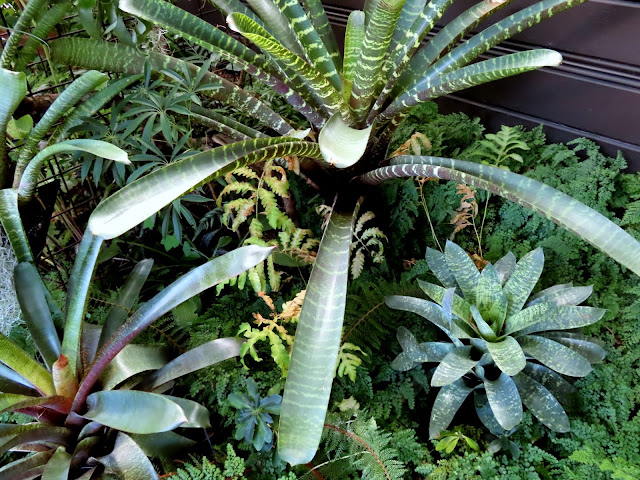 These ferns don't like to dry out, and I thought I was keeping them watered, but I guess not enough. The worst part is they were hiding the plastic pot that holds my large vriesea, giving the illusion that it's planted in the ground. 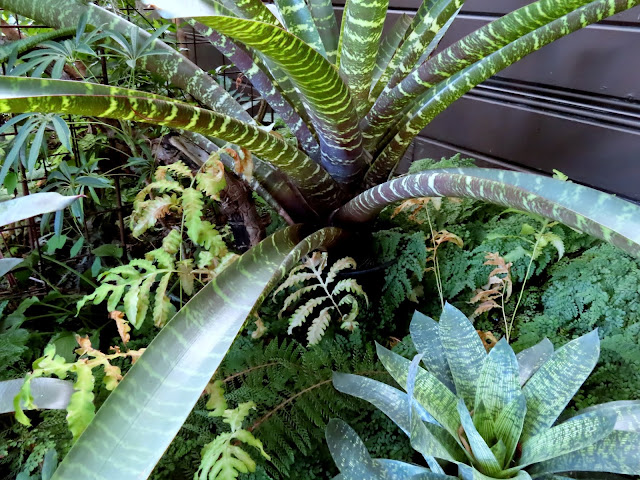 This tree! Albizia julibrissin 'Summer Chocolate', I love it, really I do. But it drops so much crap. 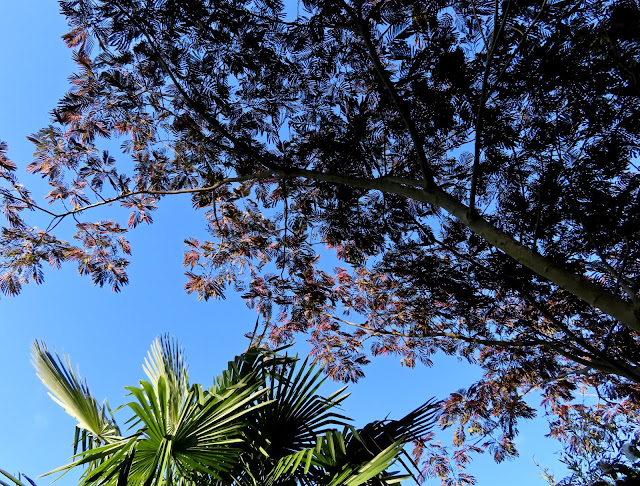 Currently it's the post-bloom fuzz that's raining down. 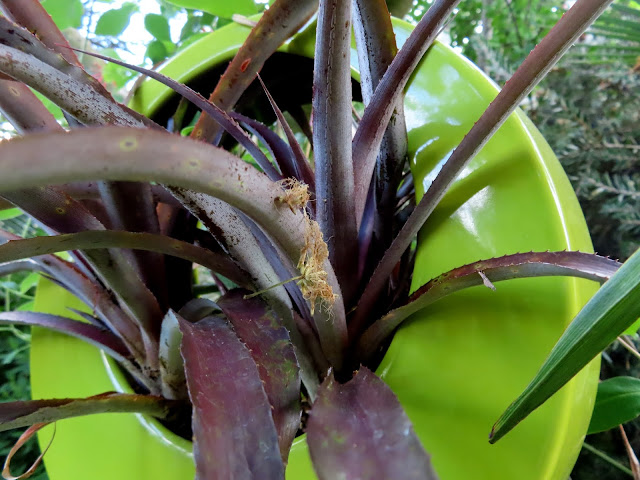 I had just picked up scads of it, draped all over everything, when I turned around and there was more on the Echium wildpretii. 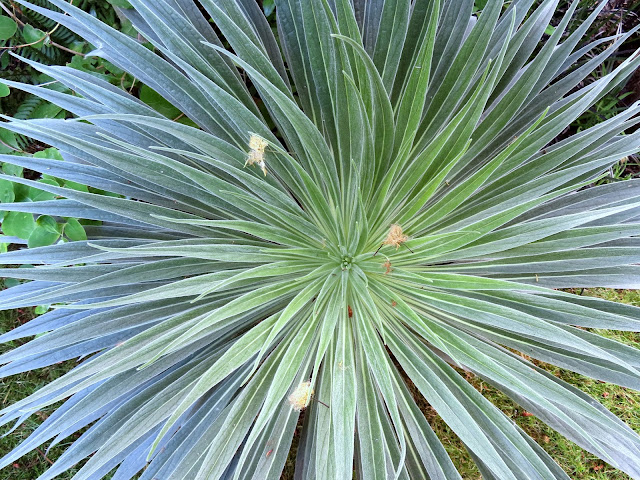 This is leaf debris from the Albizia as well as male cones from the Fir trees behind us. I try to spray the palm fronds regularly, but all it takes is a couple of days and they look like this. 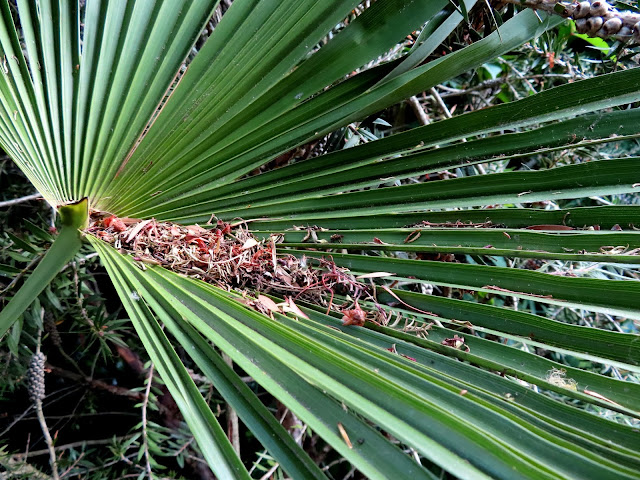 Ah the arctostaphylos, I will forever be in awe of their peeling bark, but it does make a mess. The fact the annual leaf drop occurs as the bark finishes up just adds to it. 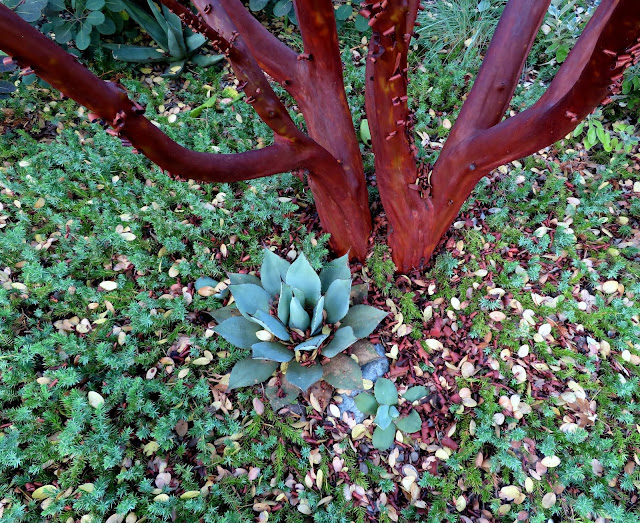 Thank god this is the warm season and I can hit the agaves with a hose to get all the debris out. This accumulation took less than a week. 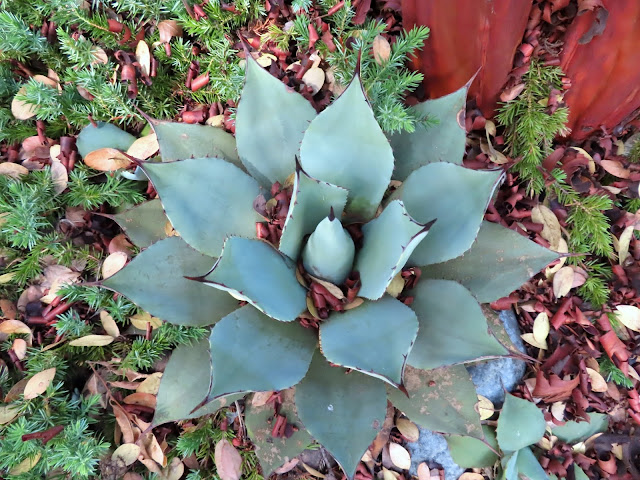 So anything in your garden that's got you throwing your hands up and saying "enough already!"?