A new mantlescape, for the New Year...

The holiday wreath was pulled from the front door in the days immediately following Christmas. The dried Eucalyptus and Dyckia wreath left its spot above the mantle and replaced it... 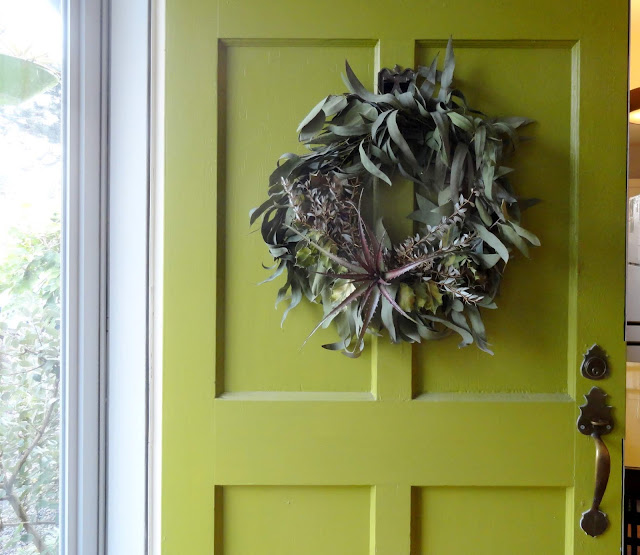 I think it looks good there. Festive for the winter and all. Since it's behind glass I hope the Dyckia does okay, not too hot, not too cold. 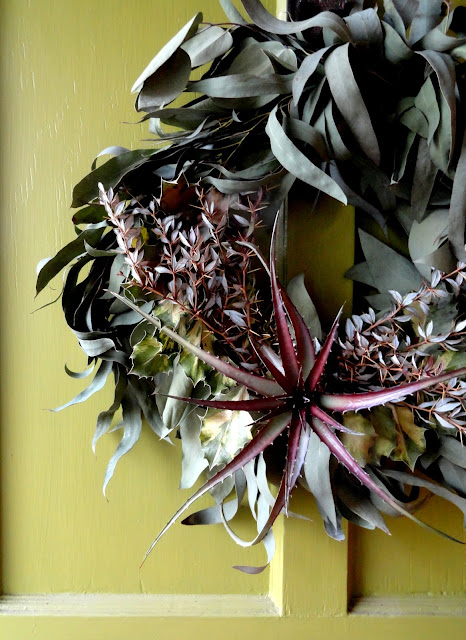 I de-Christmasize quickly; tree, ornaments, holiday sparkle, gone! I love putting up holiday decorations, but after  a month with them I'm ready for a change. Less clutter, lighter, more earthy... 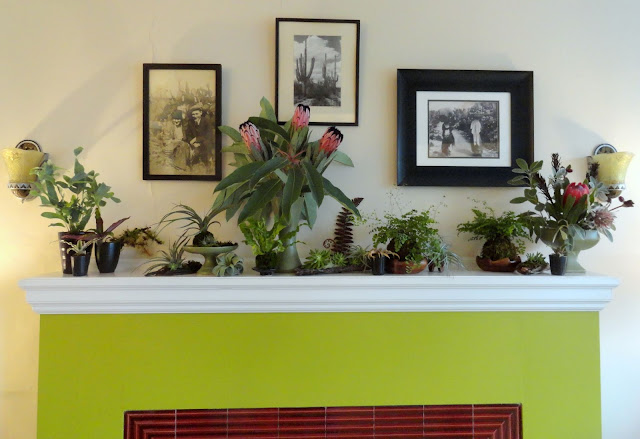 The blue fern was a purchase at a "new to me" shop called Fang Pet & Garden Supply. An Instagram friend works there and told me they were having a "shortest day of the year" sale on the Solstice, 30% off all plants, naturally I stopped by. I didn't make it until sometime near noon and they'd been shopped hard by then (which is always a good thing, for plant shops to be supported), still I was happy to pick up the fern, I'd left my last one outside in temperatures it didn't appreciate. 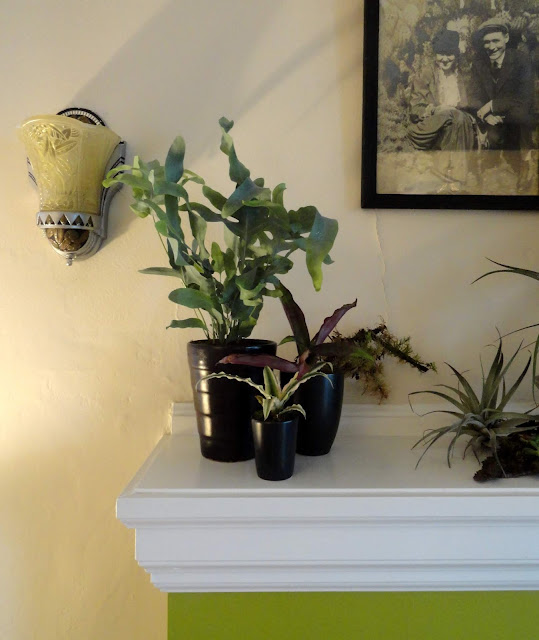 Joining the fern is a NOID Cryptanthus and a Callisia fragrans cutting that wasn't rooting where'd put it—I'm hoping it will here. 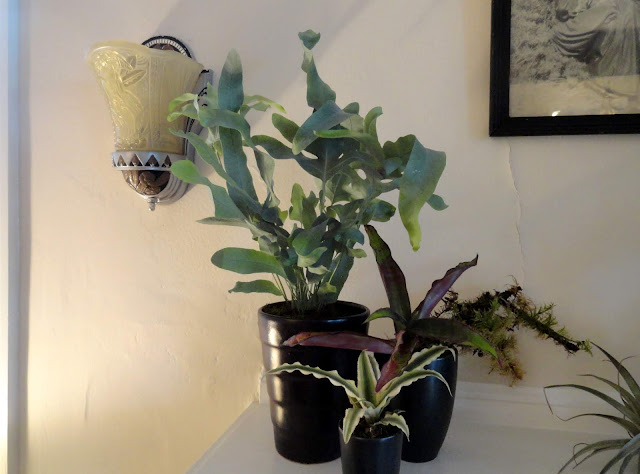 Tucked in with the Callisia fragrans is a mossy stick I picked up on a walk. 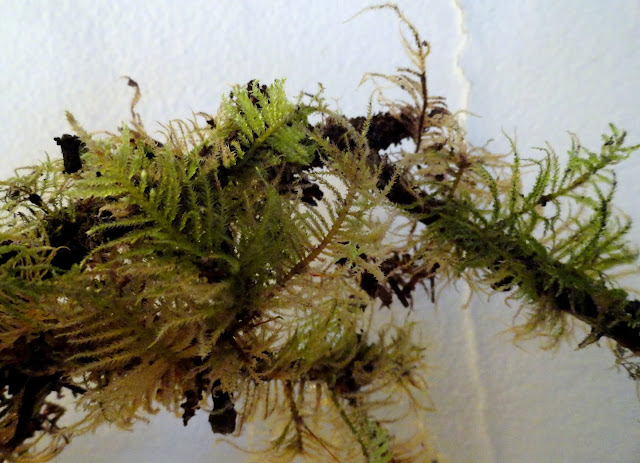 Moving to the left... 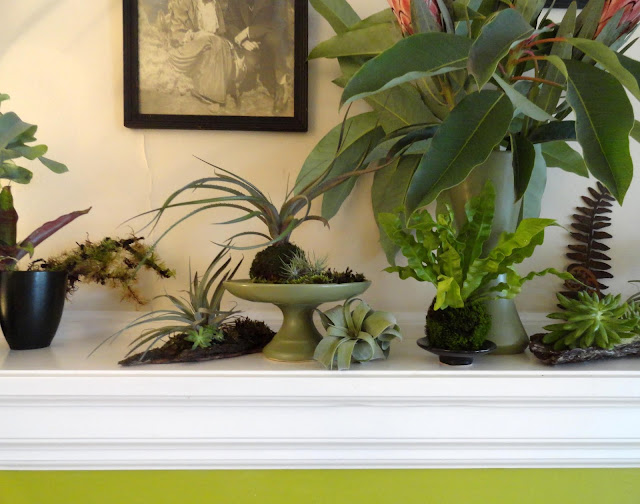 I've been hording bits of moss, so I decided to do another fake kokedama, with an Aechmea recurvata 'Bronze Age' I picked up from Bird Rock Tropicals (fake meaning I don't use the recommended kokedama soil mix, just squeeze the root ball into an orb and cover with moss). A few Tillandsia and more moss complete this scene. 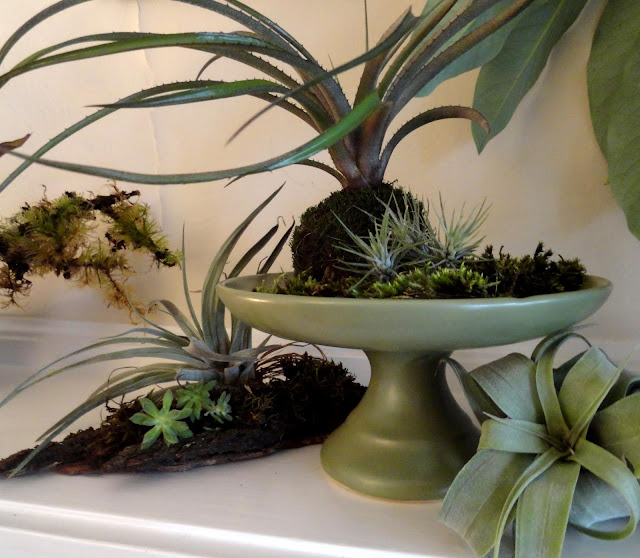 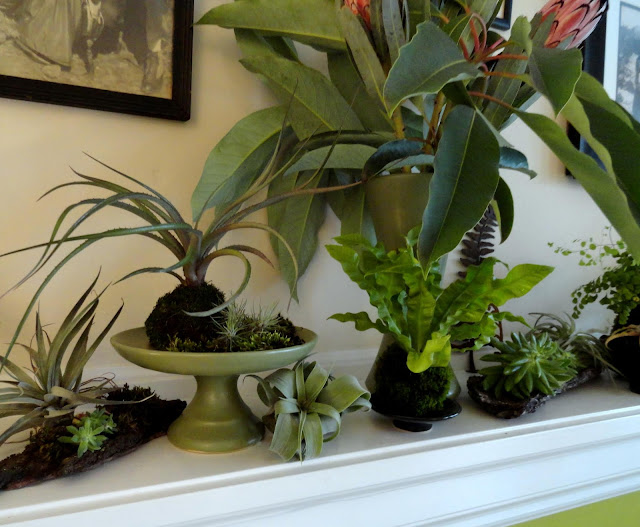 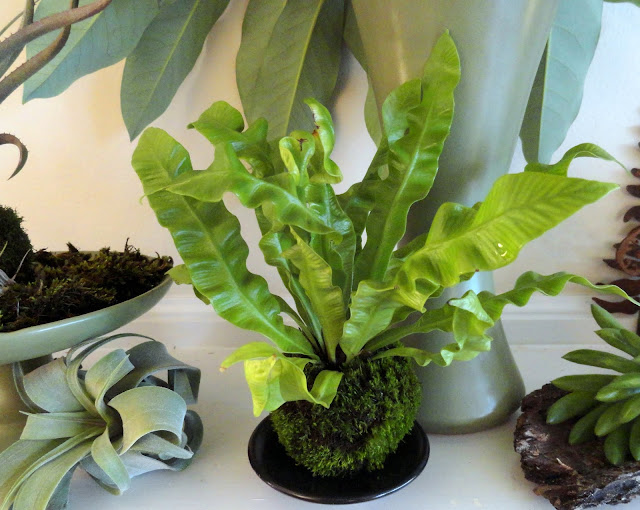 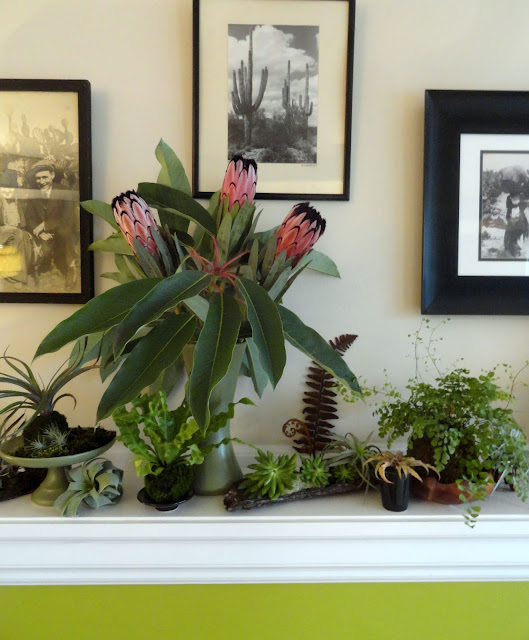 A couple cut branches from the Daphniphyllum keep the tropical-vibe going with their big leaves and "rednecks"... 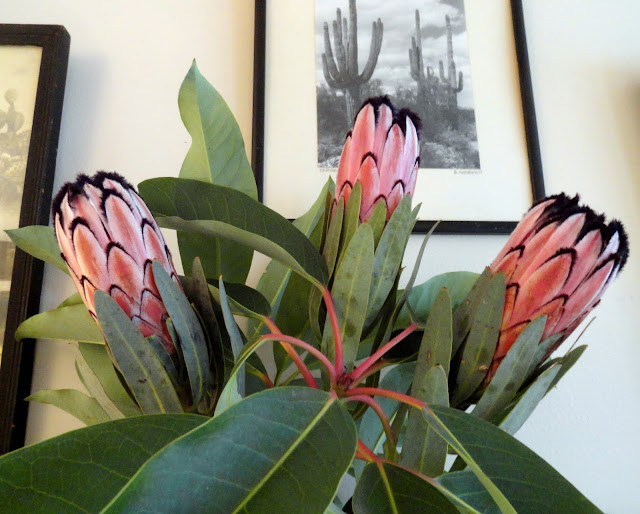 The only hold-over from the holiday mantlescape are the pair of Adiantum venustum in moss, I've managed to keep them alive and both are sending up new growth. 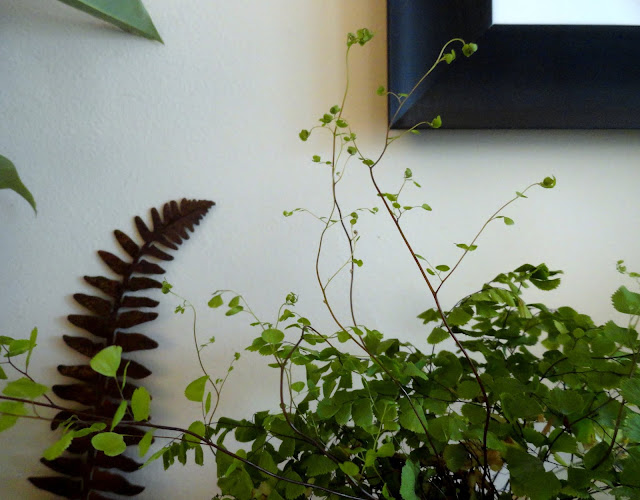 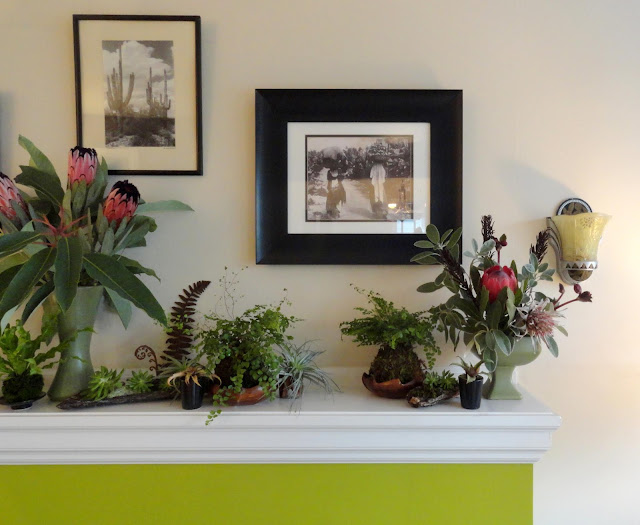 Another Protea bloom combines with from-the-garden cuttings on the far end of the mantle. 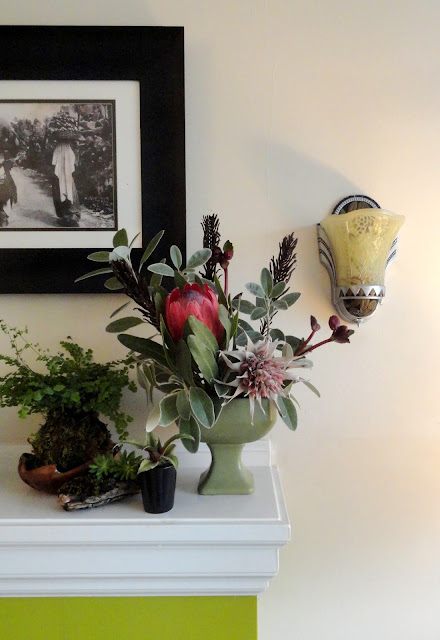 There are dried fertile fronds from Matteuccia struthiopteris (ostrich fern), a couple of budded up Helleborus 'Ice 'n Roses' stems, Brachyglottis greyi cuttings and a dried bloom from my Aechmea fasciata (I've had it for months, too cool to toss)... 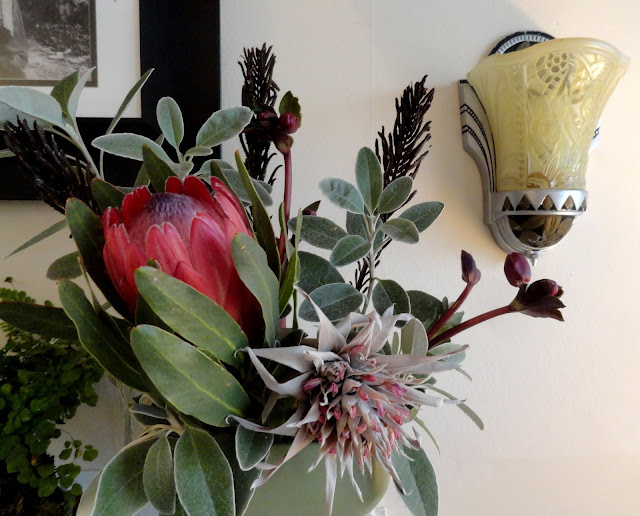 It's a much simpler effort than last January's (shown here), it's interesting what feels "right" at different times in our lives. 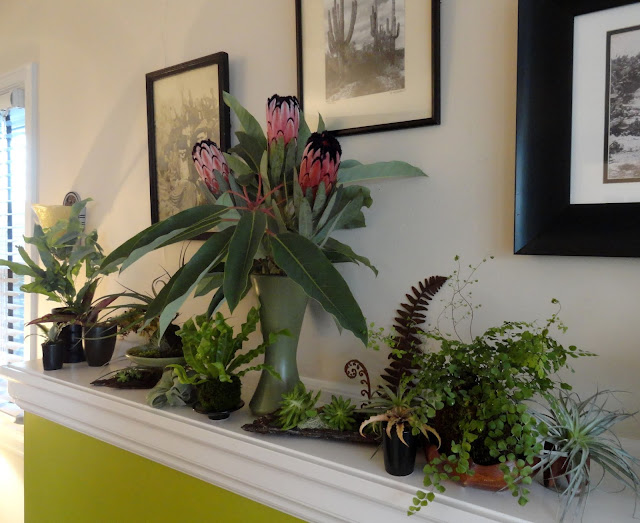 Hope you're treating yourself to something special to chase away the January blues, you deserve it! 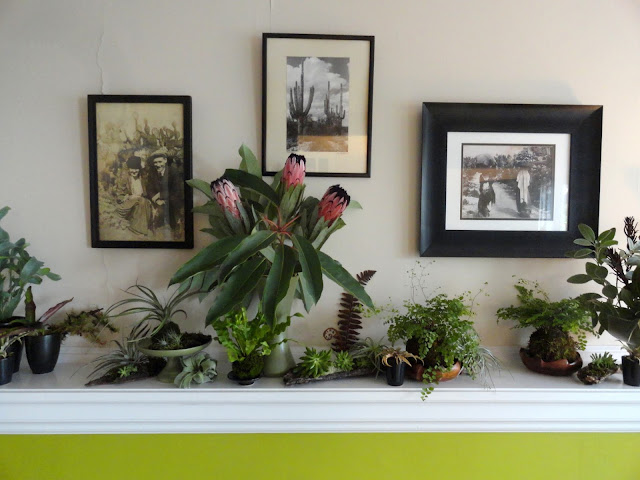 Labels: Bromeliad, Ferns, in a vase on Monday, inside the house, Proteaceae