Ha! Will you look at that, it's the last Friday of the month...

It completely hit me out of the blue...today is the last Friday of June. How the hell did that happen? I'm supposed to post about monthly favorites today. Would have been nice if I'd actually thought about it, and maybe taken some photos in advance. Rather than running around yesterday evening and snapping poorly lit shots.

So, attempting to keep up with my own meme here are a few favorites. I chose, once again, to focus on plants that surprised me after our desperate winter...who'd have thought I'd still be finding surprises?

This is Curculigo sp. JSM, from Far Reaches Farm: "Ornamental species of unknown hardiness collected by Josh McCullough in North Vietnam. Broad pleated leaves with yellow six-petaled flowers clustered near the leaf bases. A lot of the plants coming out of the mountains there are proving hardier than thought. This would likely survive in a mild garden here but surviving and looking good are two different things. Best to treat this as the outrageous container plant that is bringing it inside for the winter. A cool sun room is fine. This carries an aspect of tremendous refinement and would cause any container designer to salivate." Doesn't look like much but honestly I thought it was dead. Happy happy. Now I have to finally get serious about moving it to a better spot. 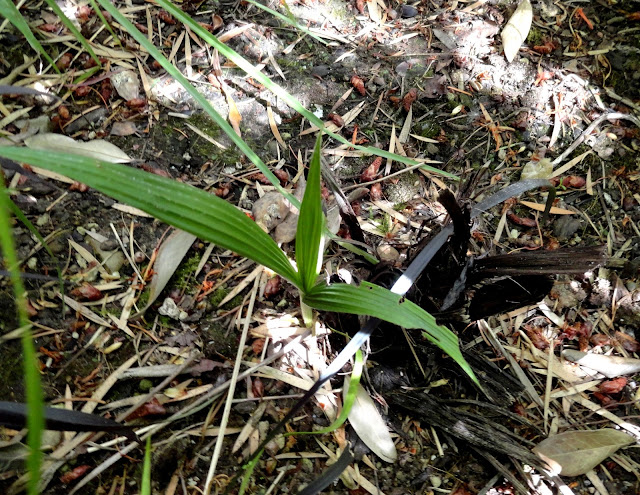 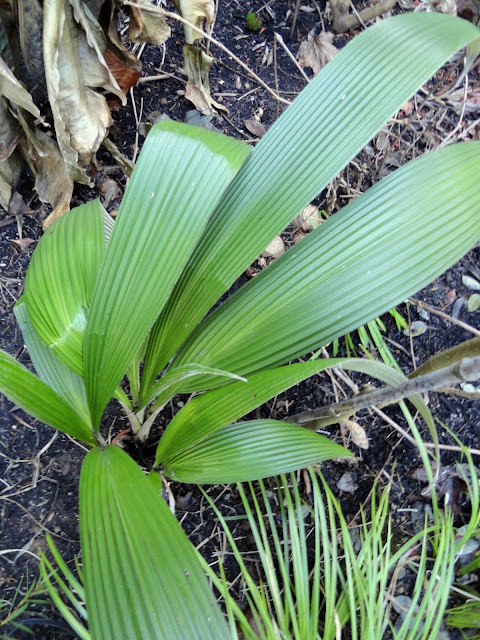 If you can overlook the bright photo and focus at the base of the blooming Callistemon (which is quite lovely in its own right) you'll see a Manfreda virginica. This poor thing was planted right before I left for the Garden Bloggers Fling, and then had to endure upper 90's and over 100F for two days. I am thrilled it's still alive, but this isn't the fist time it's proven how tough it is. 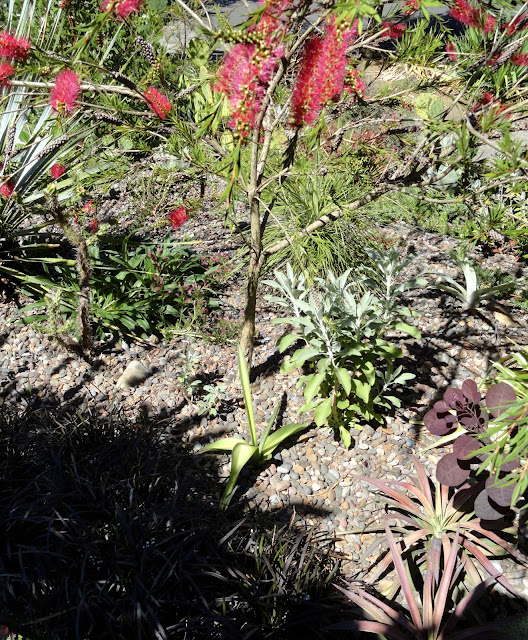 Here's a close up. About that toughness, last winter I stuck it in one of the driveway stock tanks. It went all deciduous on me and so when I pulled the Agaves, before winter got nasty, I forgot about it. That means it froze solid in our winter cold (mid-teens) above ground in a container. Yet it then reminded me of it's presence by sending up leaves when things warmed in the spring. A survivor! (this plant was a gift from Alan who blogs at It's Not Work It's Gardening) 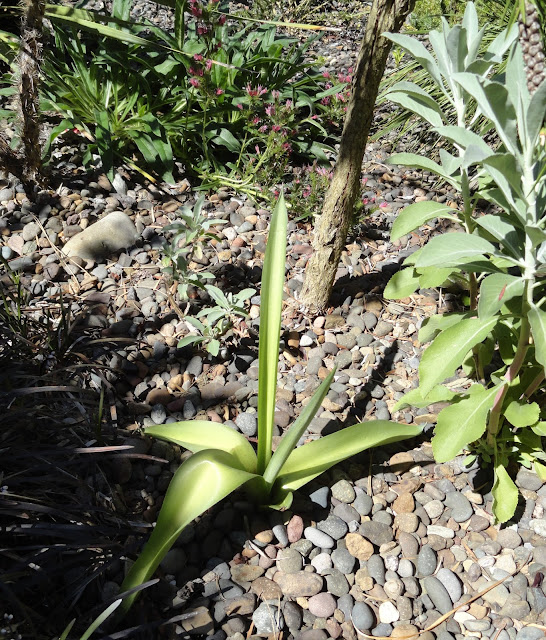 Next up is another gift plant, Melianthus villosus, from Evan of The Practical Plant Geek. 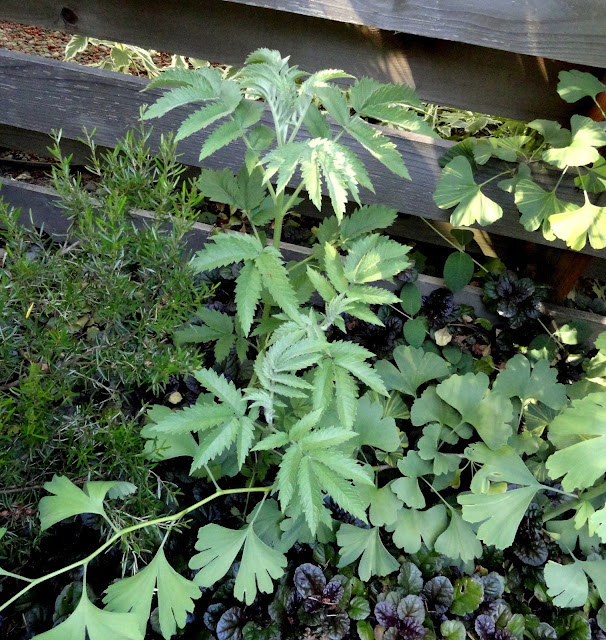 I lost my Melianthus 'Antonow's Blue' this winter so I expected the same from this plant. I was wrong! (and I'm very happy about that) 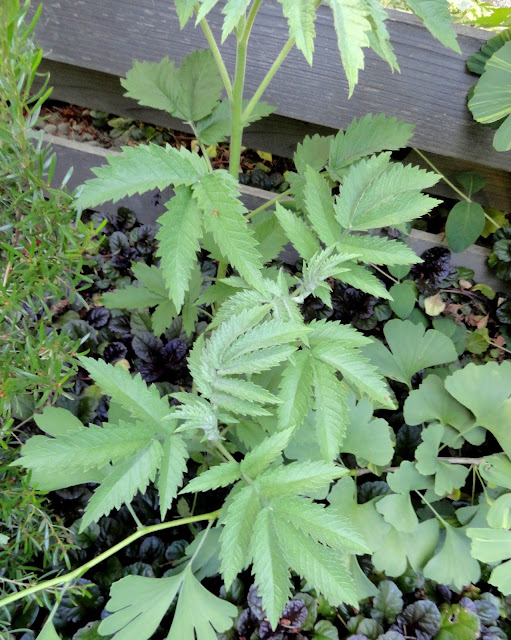 This might be the biggest surprise of them all. The Agapanthus? No... 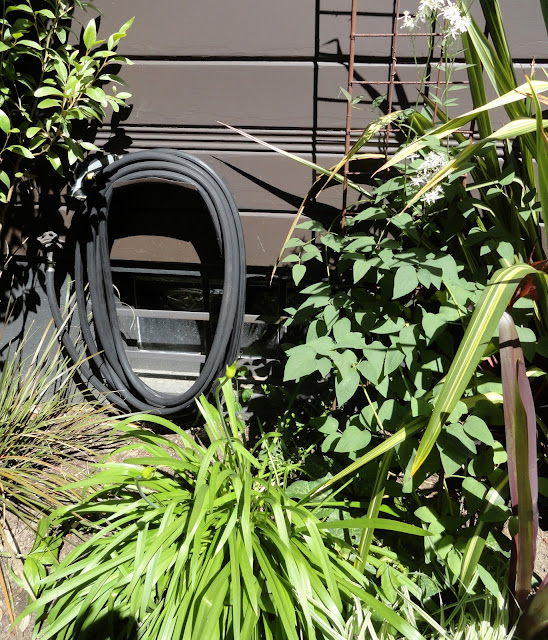 There, behind the hose... 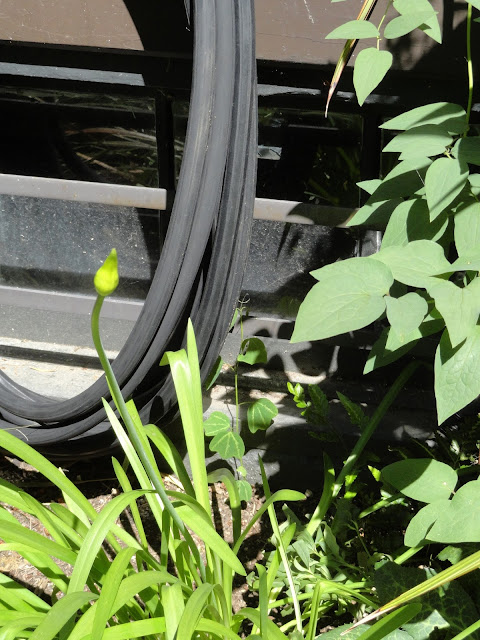 Ha! That's a tiny piece of Passiflora 'Sunburst', a Zone 10 plant! It first appeared back in 2015. I'd dug the mother plant before winter and a bit of root stayed behind — come spring it turned into a plant. It reappeared in summer 2016 but after our cold, snowy and icy winter 2017 I thought it was dead for sure. Microclimate to the rescue! Now if it would just bloom. 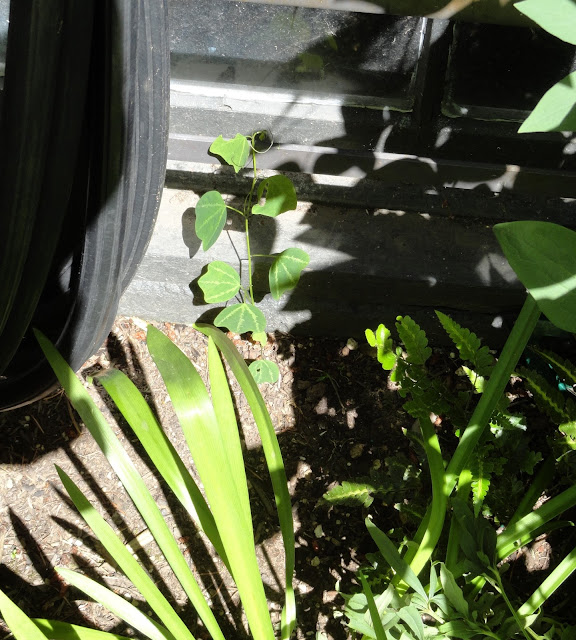 In case you're wondering the mother plant successfully over wintered indoors again and has begun its summer growth sprint. 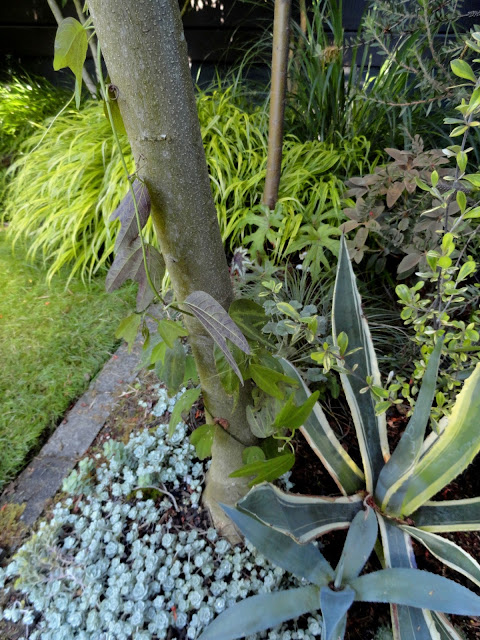 One more before we go. Arborvitae spikemoss, aka Selaginella braunii. I bought this plant in a 4" pot last fall and never got it planted. Over winter it came inside where it dried out and I thought it was dead for sure. Not! So many happy surprises. Of course there are just as many sad discoveries but we don't need to talk about them. Tell me about your favorites! 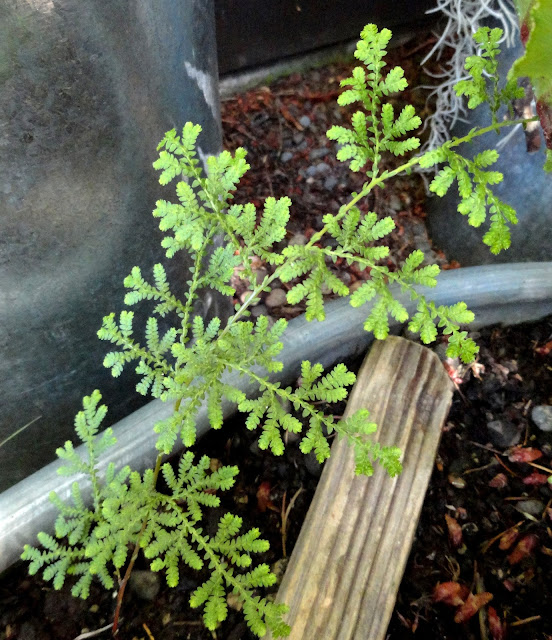