I shared this delicious photo on Facebook weeks ago and promised to do a follow up post with details. Where does time go? I did unpack, and pot them all up, right away. I just have been lax in writing about them... 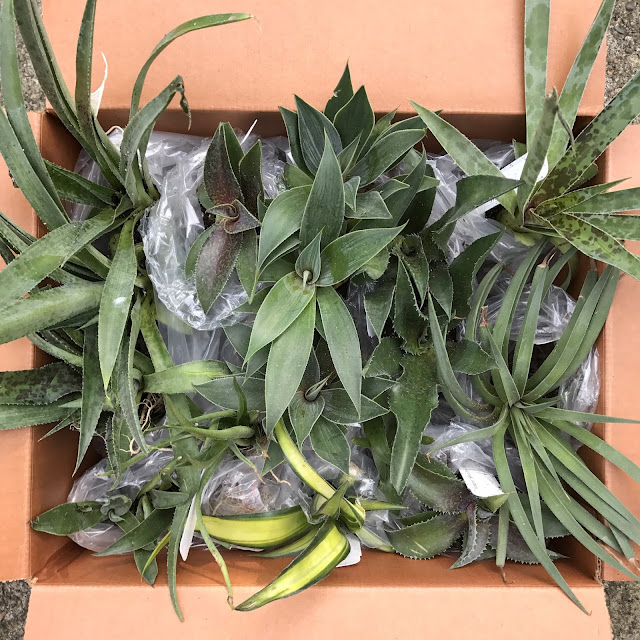 So what are they? Mangaves! A Mangave is a cross between an Agave and a Manfreda. For those opposed to the spikes on an Agave (what?!) they're a kinder, gentler plant. According to the info I've read they also grow faster than your standard Agave, and their Manfreda lineage lends all sorts of interesting patterns to the leaves. These beauties all came from Hans Hansen at Walters Gardens in Michigan. Let's have a closer look... 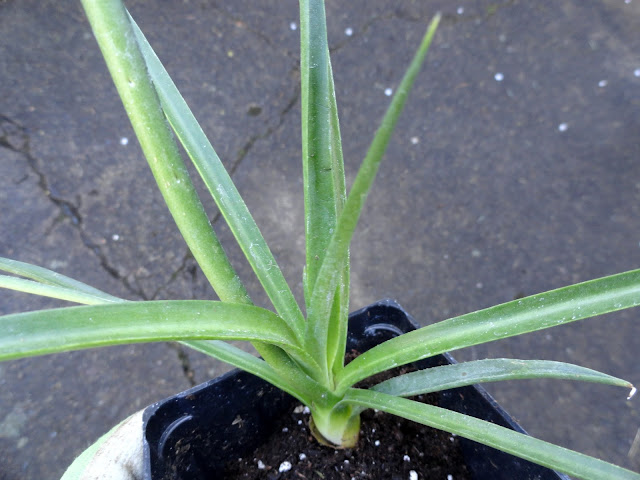 The description from Walters Gardens..."If only your bad hair days looked this good! Like a head of hair, this plant produces narrow, flat lime green leaves that form an arching habit. Each leaf blade has light blush red spotting with a distinct blush toward the tips of the leaves. This is very easy to handle due to its soft, flexible leaves. This plant looks amazing in decorative containers, especially face planters. Our hardiest Mangave to date. One of our favorites!" 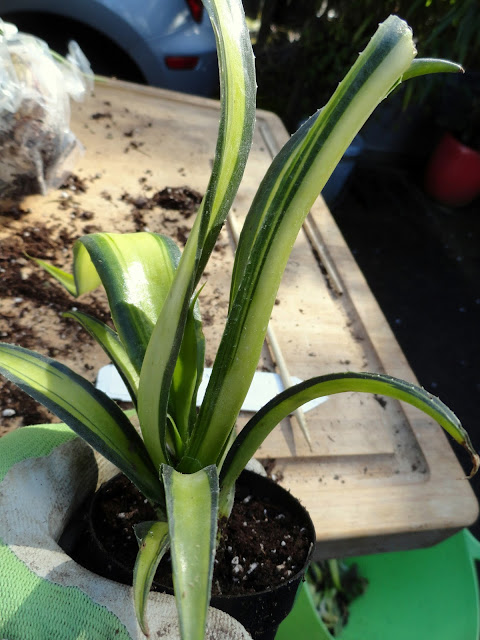 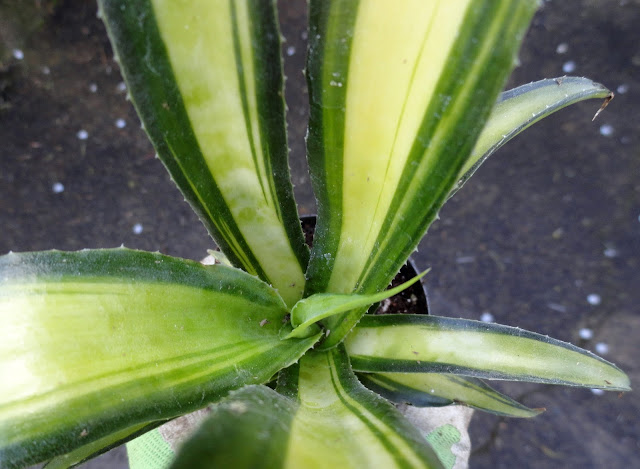 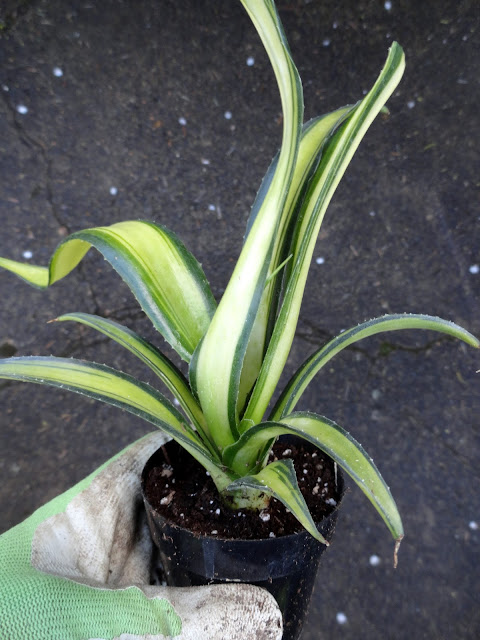 "This sport of 'Jaguar' has the opposite variegation of the equally beautiful 'Kaleidoscope'. Long, lance-shaped leaves are dark green with wide, creamy yellow centers. Newer leaves have chartreuse centers. A smattering of subtle, light red spots dot the leaves, giving a blush tone to the leaves. Its brilliant coloration makes a great specimen in a container." 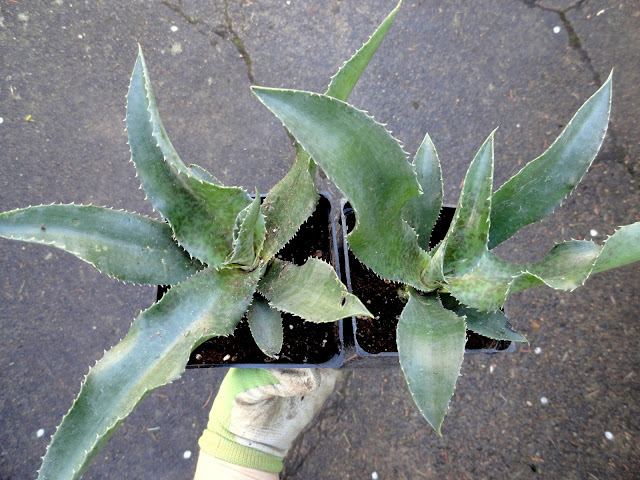 "Surf's up with the unique looking, wild and wavy leaves of this succulent! 'Catch a Wave' is a second generation Mangave with more Agave parentage, which shows in its characteristics. Very thick, silvery blue-green leaves are generously covered with restrained dark spotting. The margins curl upward to show off its marginal teeth. Its upright habit makes it look equally cool from a side view as it does from the top." 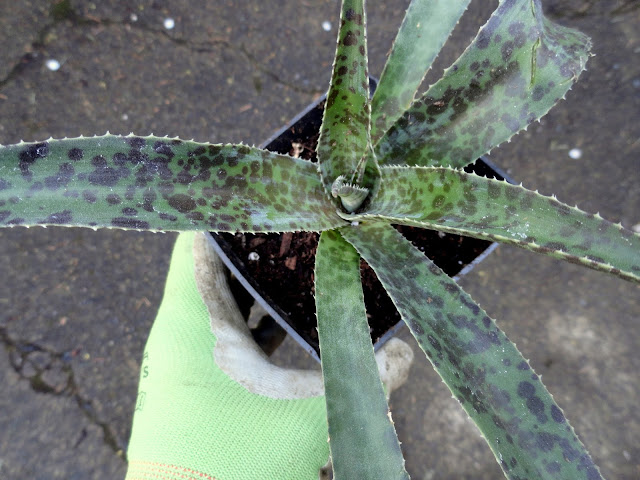 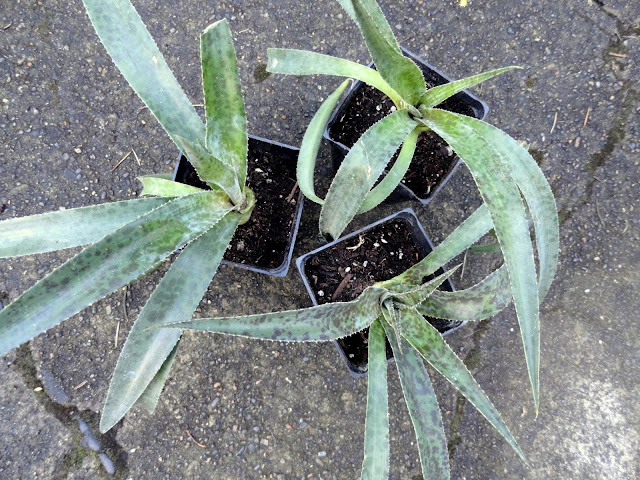 "This attractive succulent has a low, wide habit with large, attractive spotting from its Manfreda blood, and thick, wide leaves from its Agave blood. Dark green leaves with blood red spotting arch downward, perfect for framing decorative containers. Although striking white spines line the curled up margins, these aren’t deadly like you would expect from Agave, but softer to the touch. More exposure to UV light will brighten the dark coloration and the spotting." 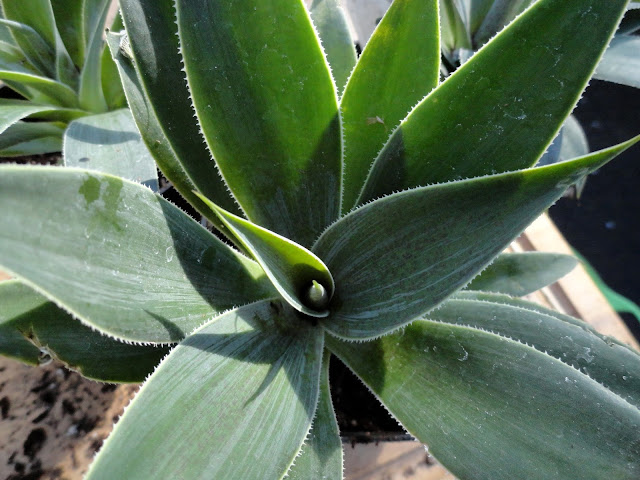 Isn't this one especially lovely? I bet you can guess one of the parents... 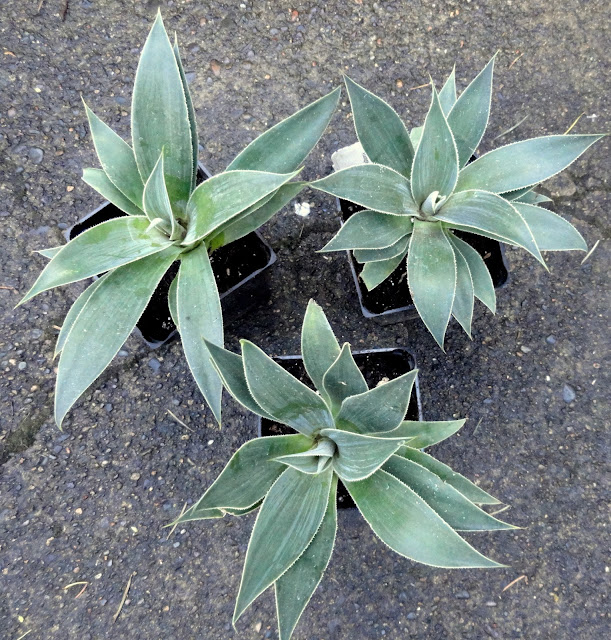 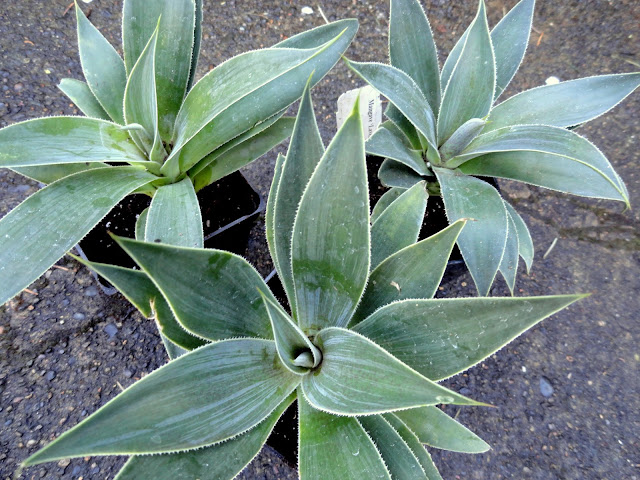 "‘Lavender Lady’ is a unique, feminine beauty whose solitary rosette habit and smoky purple coloration make it look very similar to an Echeveria. In direct sunlight, smoky purple leaves are formed at the top of the rosette and have subdued burgundy purple dots. As the rosette ages, the ovate leaves lighten to green, forming a two-tone effect. Each 1½in wide leaf has a cinnamon brown terminal spine. The margins are lined with tiny white spines; running your fingers along them feels like a comb, as they are fairly benign. Its broad leaves combine well with Mangave with narrower leaves, like ‘Man of Steel’."

And speaking of, here's Mangave 'Man of Steel'... 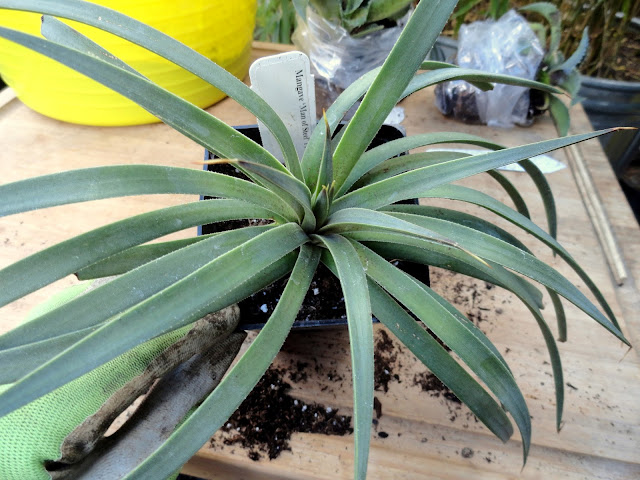 Which owes its good looks to Agave striata and xMangave 'Bloodspot'. 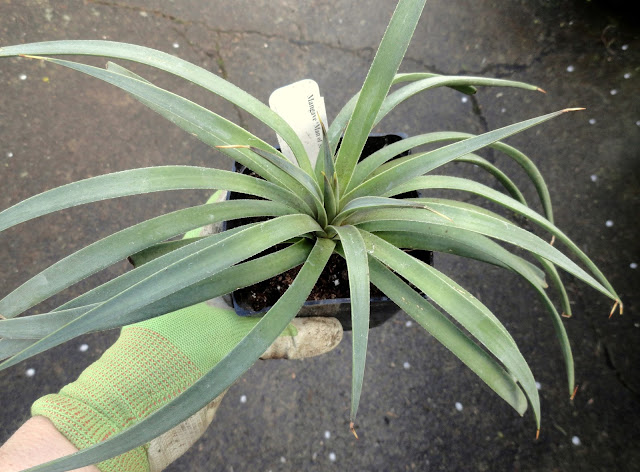 "This Mangave produces a medium-sized rosette of narrow, sword-like leaves. Attractive silvery green leaves get their light color due to a waxy coating. The 7in long, lightly colored leaves form tidy, refined, circular rosette. Each ½in wide leaf is thinly lined with a cinnamon orange margin that is slightly rough to the touch. Long, terminal spines are matching in color to its margin. The leaves are not quite as thick as you would expect from an Agave, so this Mangave is easy to handle and work with. This is a great counterpart to ‘Lavender Lady’ due to their similar size and complementing colors and form." 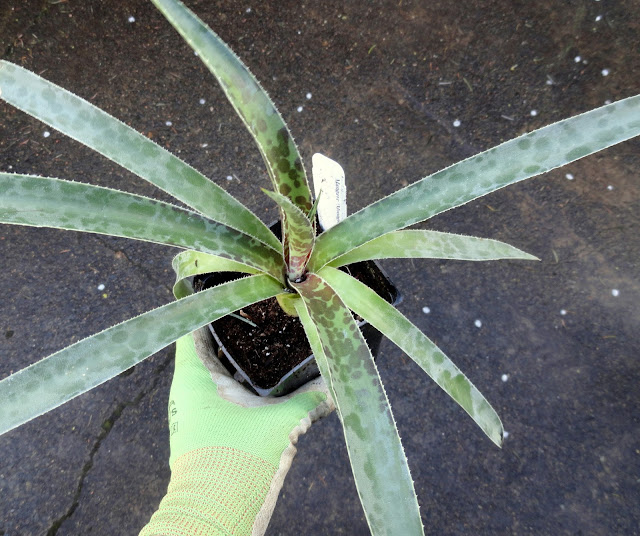 It's the offspring of xMangave 'Bloodspot' and Manfreda undulata 'Chocolate Chips' 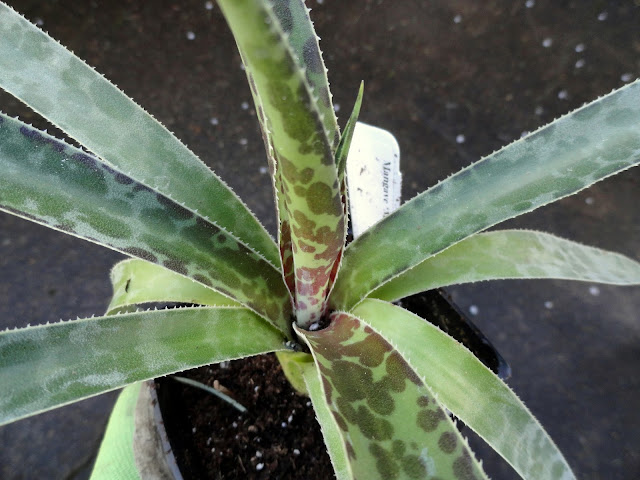 "This succulent has the surreal look of a moonlit night. 1in wide, silvery blue-green leaves practically glow with huge, contrasting dark purple spots to complete the effect. The spots will be more dramatic when exposed to more UV light levels from the sun. The 8-9in long, flat leaves are held rigidly straight from the base, forming a low, wide, and spiky habit. Tiny spines line the margins and terminal spines are relatively soft to the touch—much less lethal than Agave varieties." 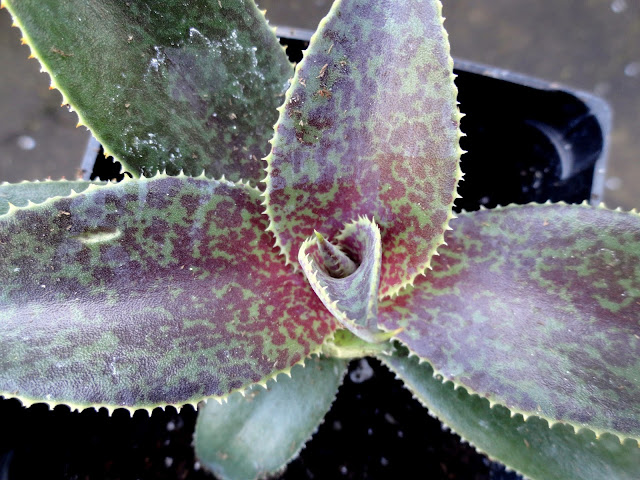 "xMangave 'Purple People Eater' is the latest creation from the Mangave capitol of the world, Walters Gardens in Michigan. Named after the Sheb Wooley character, xMangave 'Purple People Eater' is a 2012 seedling that combines the architectural Agave gypsophila, the smaller Agave macroacantha, and purple freckling from the manfreda side of the family. The result is a lovely 14" tall x 2' wide specimen with silver-grey recurved leaves, bathed in a blush of purple. The small red teeth are the crowning touch on what is a splendid summer container specimen where it isn't winter hardy." 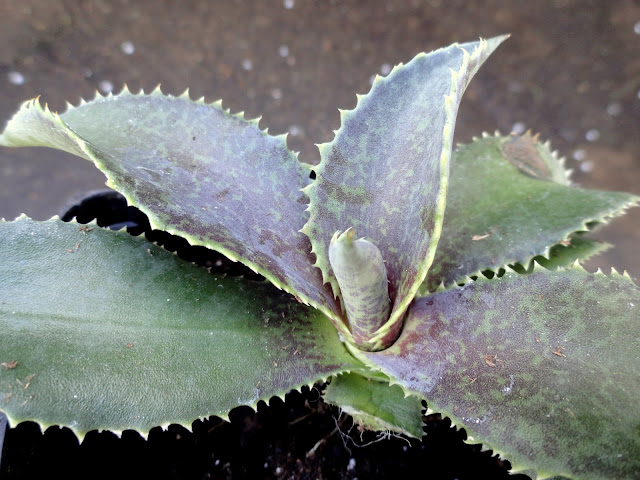 "A stunning and exceptional variety in a color that you wouldn't expect to see in a Mangave! Just like the white fur of a silver fox, this succulent glows nearly white when you first glance at it. In reality, it's more of a light green covered with a thick waxy coating to give it that glowing color. Light blue-purple spotting appears underneath the coating, but is mostly unnoticeable from a distance. In addition to its wonderful color, 'Silver Fox' has a magnificent habit, with thick, arching leaves and defined marginal teeth."

Since we're talking about hybrids here's another, Lila's a cross between and Chihuahua (grandparent) and a Pug. She was very interested in what I was doing, as I worked through this box of plants. Probably because it was getting near her dinner time, she also seemed confused about why I wasn't taking a photo of her, just the plants... 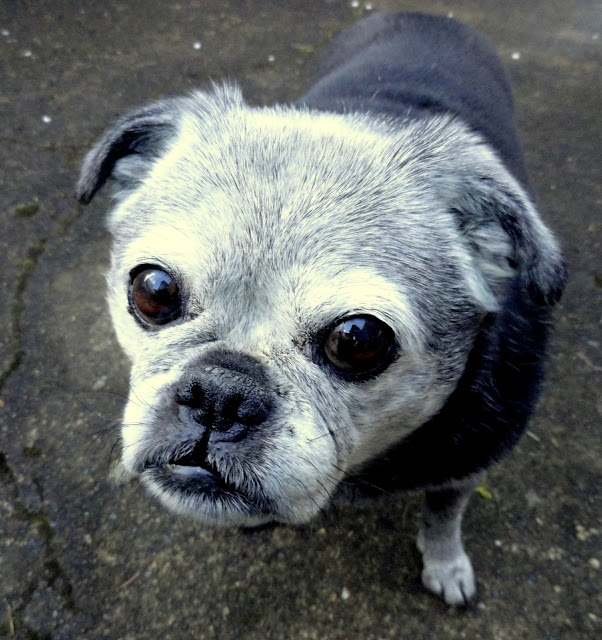 Some of the bounty all potted up. I think I will be using most of these in containers, since they'd skate through a mild winter here, but a couple of cold nights would mean they turn to mush. 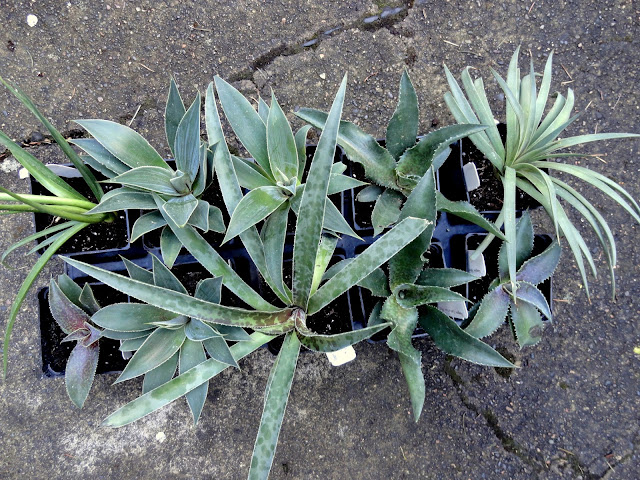 Are you experiencing intense plant lust? Unfortunately I can't tell you to order from the Walters Gardens website, because they're only wholesale. Plant Delights Nursery has quite a few of them available (here) and since Proven Winners is excited about them (here), hopefully you'll be seeing them at a nursery near you soon. 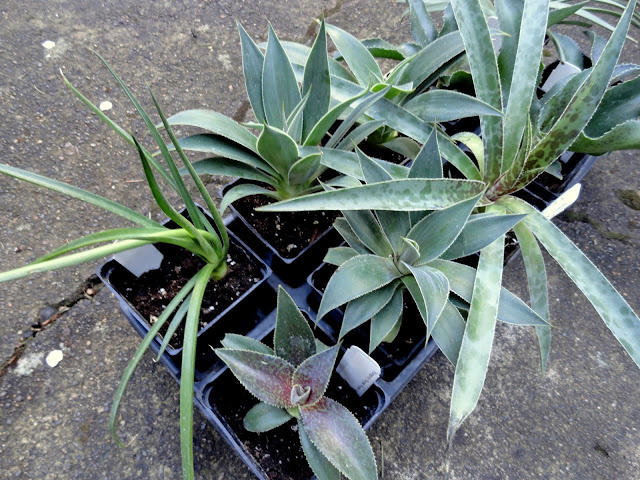 I can't wait to start playing with these, thanks Hans! 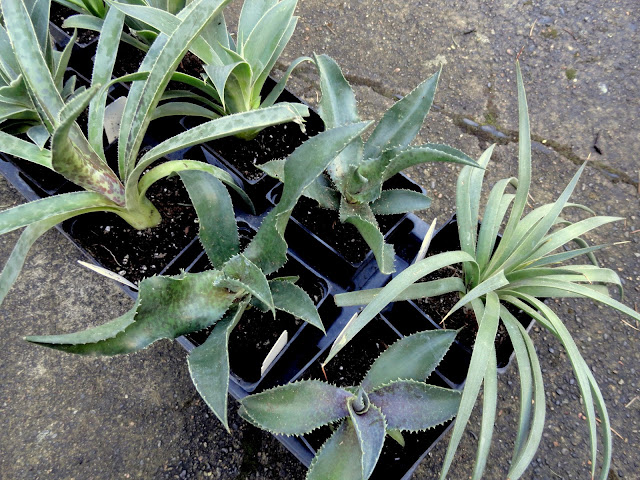 All material © 2009-2017 by Loree Bohl for danger garden, except images of full size Mangaves which are the property of Walters Gardens. Unauthorized reproduction prohibited and just plain rude.