The first guests arrived before the 11:00 opening hour Saturday for the Green on Green Tour. Being polite people they patiently waited in their car until I spotted them and invited them in. We walked around the front garden together (the last time I would step out of the back garden until almost 4:00) and I learned that one of the trio had made the trip up from Sacramento. A long-time follower of the blog she cashed in frequent flyer miles to come see my garden! If no one else had visited that meeting alone would have made all the work worth it. 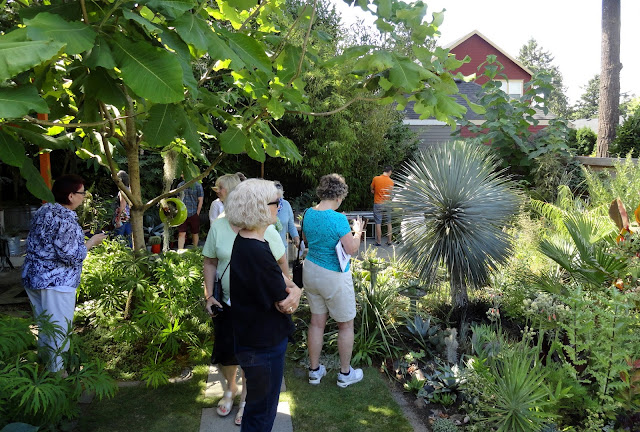 But more people did come, lots of them, and Andrew was on the ball and captured photos. 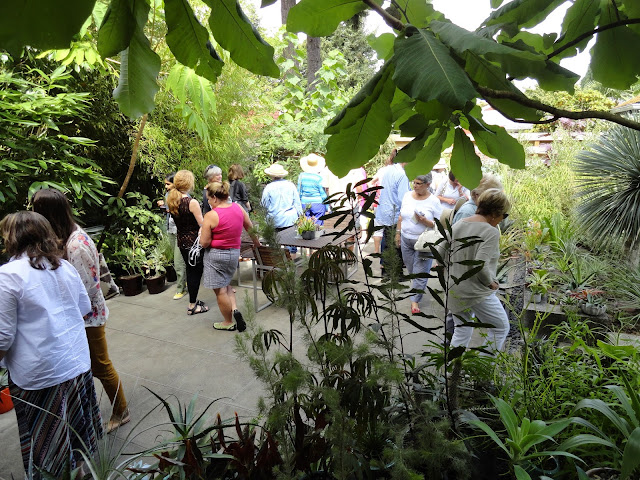 There were people I’ve chatted with online but ever met in person. People who read the blog but have never commented. People who hadn’t ever heard of the blog, or even knew what a blog was. The final numbers on the tour ticket sales aren’t in yet but there were easily over 200 people through the garden and maybe as many as 300. At one point the upper garden was full, I glanced down at the patio and saw more people there than I’d ever seen before (including last summer when the Garden Bloggers group was here) and then I looked over to the driveway and saw a line waiting to get in. Thankfully I was mid-conversation or I might have had a panic attack. 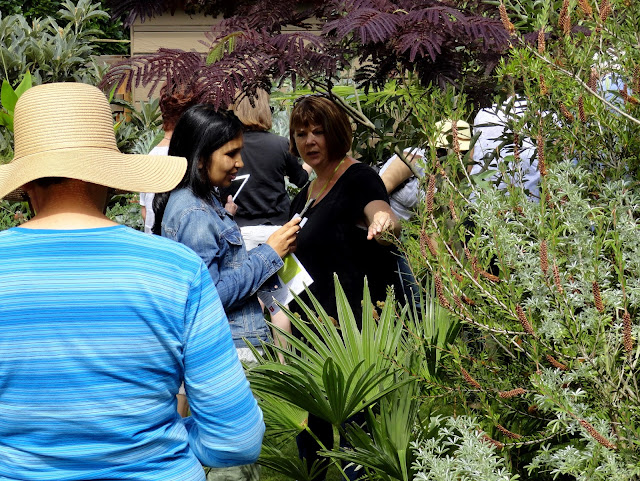 I was not expecting the level of interest that the garden received. I was hoarse that evening from talking so much. Thinking back on the questions it’s easy to remember the plants most everyone wanted ID on (listed below, if you’re curious). But sadly I also recall a couple of names I gave that were complete crazy talk, what was I thinking? I believe I told someone that Artemisia ‘Silver Brocade’ was A. ‘Bridal Veil’ (what?). And I insisted that Thalia geniculata ‘Ruminoides’ was not a Thalia…duh! At least I was able to tell them to look up “red stemmed water canna” to get the name, and indeed that leads to Thalia geniculata. I have no excuse other than my brain was fried, seriously fried.

I was thrilled the patio and shade pavilion earned almost as many questions as the plants, Andrew’s hard work and creativity did not go unnoticed. 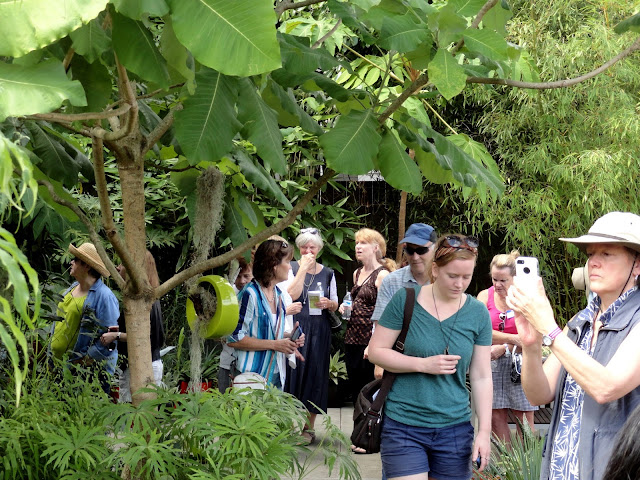 The dish planters received a huge amount of inquiries. Where did I get them? What are they made out of? I should have bought the complete inventory of the galvanized dishes (tops to bird feeders) at Linnton Feed & Seed, had Andrew cut some metal fence posts, and sold kits. We'd be rich! 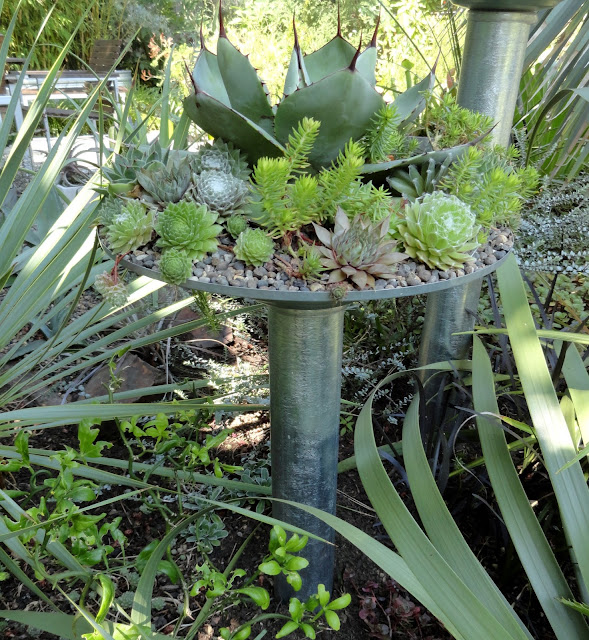 Some of the odder questions I received involved the lawn; people wanted to know what kind of grass it was, because it grew so short. The answer? It’s whatever we inherited with the house, I just cut it short. Others wanted to know if the succulents and other plants in containers were growing in straight gravel? No, the gravel is just a top dressing, there is a soil mix under that gravel. And one lady was curious if I planned to prune the Magnolia macrophylla (no), and then insistent that I must, because otherwise it was going to get really big (yes, it is). She did seem happy to learn I planned to coppice the Paulownia tomentosa however, so I guess I wasn’t a complete nut. 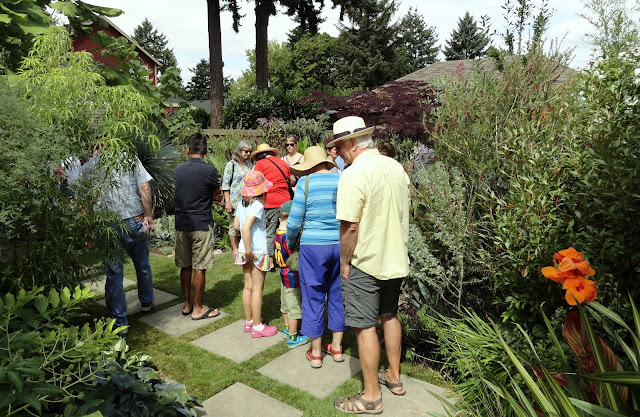 Some of the most asked about plants included:
Clifford, our Magnolia macrophylla – of course it thrilled me when I overheard people answering each other’s questions “That’s Clifford, the big-leaf Magnolia!" (by the way Clifford was 10 years old this July!)
Magnolia laevifolia
Melianthus major 'Antonow's Blue'
Syneilesis aconitifolia
Colutea arborescens (which I could not for the life of me remember the name of and when I did I was spelling it Coultia) – it's pods were just calling out for attention... 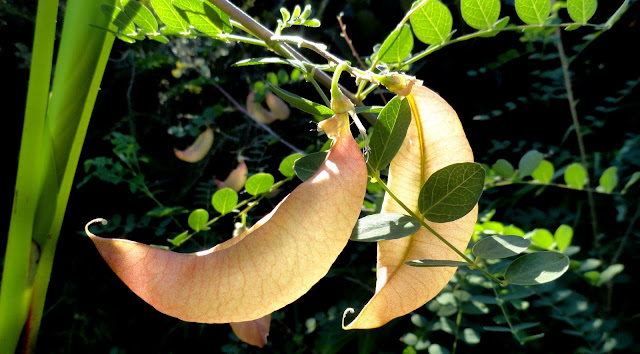 Alstroemeria isabellana
Lysimachia paridiformis var. stenophylla
Aeschynomene fluitans
Sammy, the tallest Yucca rostrata (people were amazed that it’s hardy)
People remembered to ask about the Arctostaphylos (aka manzanita), even though they’re in the front garden
Podophyllum pleianthum – and I gave full credit to my friend Bridget for growing such a fine specimen. I am merely it’s adoptive parent.
Albizia julibrissin 'Summer Chocolate'
Passiflora ‘Sunburst’ – even with no flowers!

There was only one accident, a broken container – aloe okay. Thankfully it was an inexpensive pot and I already had an empty one just like it in reserve...not bad. 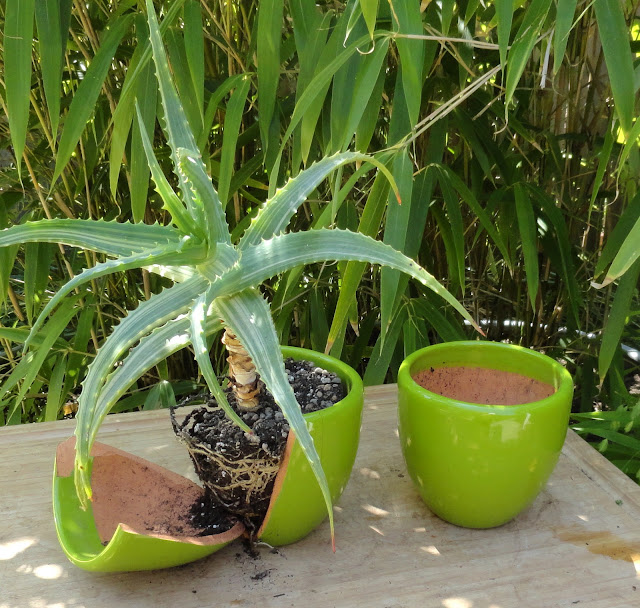 Finally...there was a nice fellow down from Seattle for the tour, we were talking plants (of course) and I asked “What’s your favorite nursery in Seattle?” (I’m always curious to know if my old fav’s are holding up or if there’s a new game in town). He smiled and answered: Cistus Nursery. Ha! Yes, of course, which makes me think of the many people who asked where I get all the cool plants, do I mail order a lot of them? No, I rarely mail-order. I live within easy driving distance of so many amazing nurseries. Thank you to Cistus, Xera, Garden Fever, Rare Plant Research, Joy Creek, Portland Nursery, Dancing Oaks, Gossler Farms, Sebright Gardens, Secret Garden Growers (and in Washington: Far Reaches Farm, The Desert Northwest, City People’s Garden Store, Jungle Fever) just to name a few (and there are more, so many more) thanks for making it possible to have all the cool plants! And thank you to everyone who bought a ticket and attended the tour, it was a blast having you here. 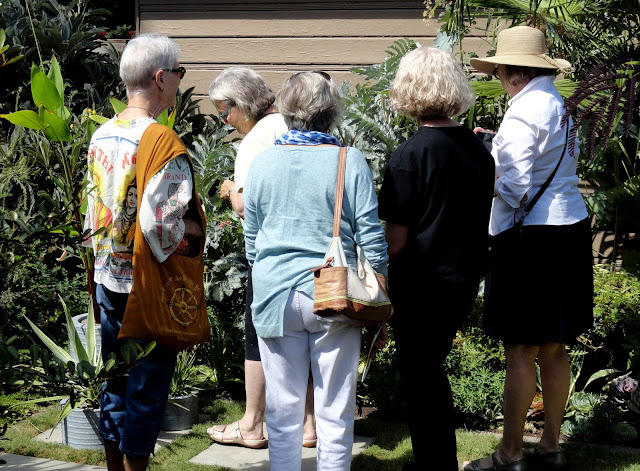