A week or so ago I updated you on a couple of small projects I’d completed, including a few custom dish planters. I'd intended one of them to stand alone, but looking at I realized (and you agreed) that was dorky and needed a partner. Done! 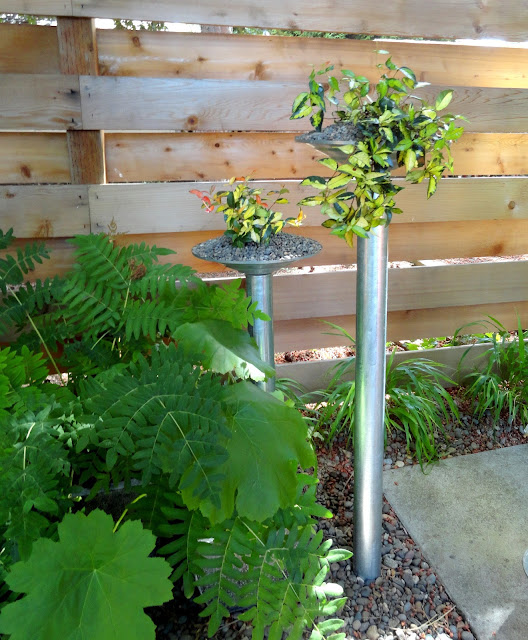 I considered going with a different plant but decided to stick with Trachelospermum asiaticum 'Ogon Nishiki', this one’s got lots of orange new growth. 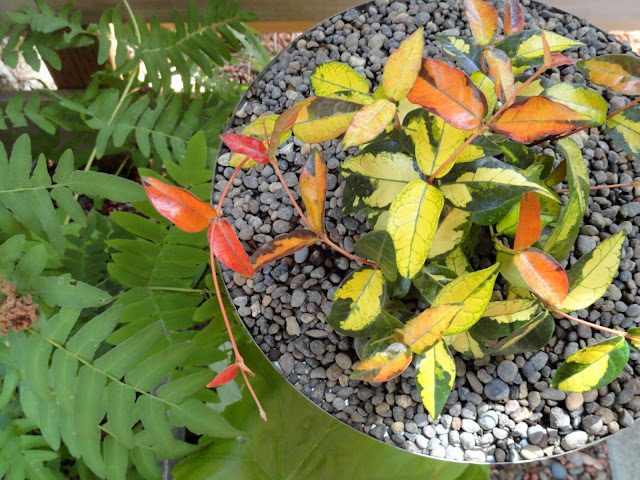 The older one has a little now too... 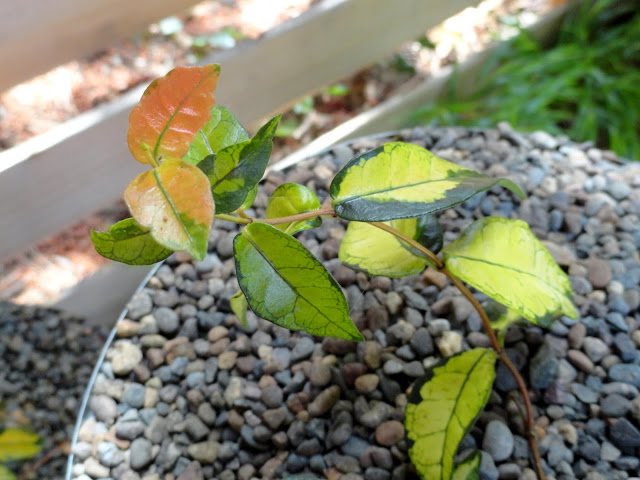 So project complete, time to relax right? Wrong. From there I went a little crazy... 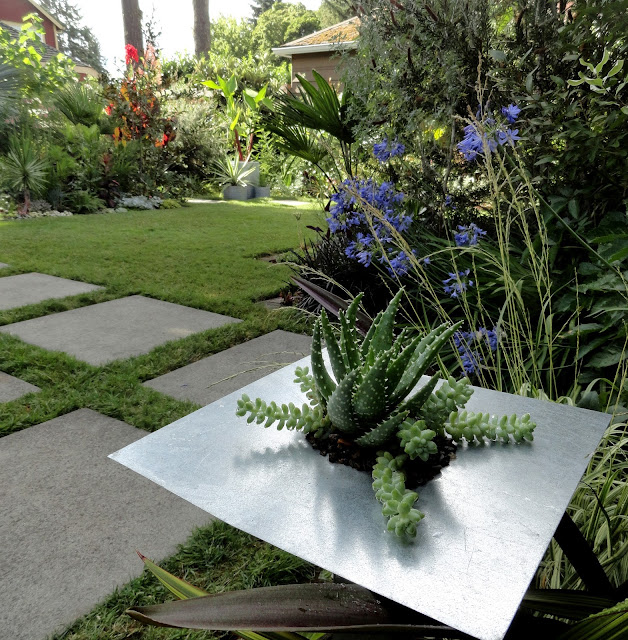 This metal thing has been kicking around our garage for over a year, I picked it up for a buck at our Rebuilding Center. I have no idea what it was, but it was going to become another planter. I'd envisioned it with the flat side down and the tall tube planted up with a trailing succulent. However, when I went to plant it, and saw it turned this way, well, that's what I had to do! 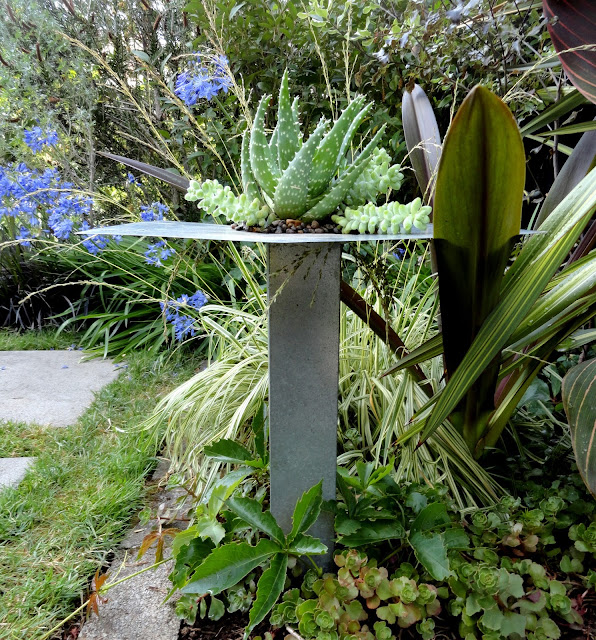 The plants were cheap-o-no-label succulents from a trip to IKEA. 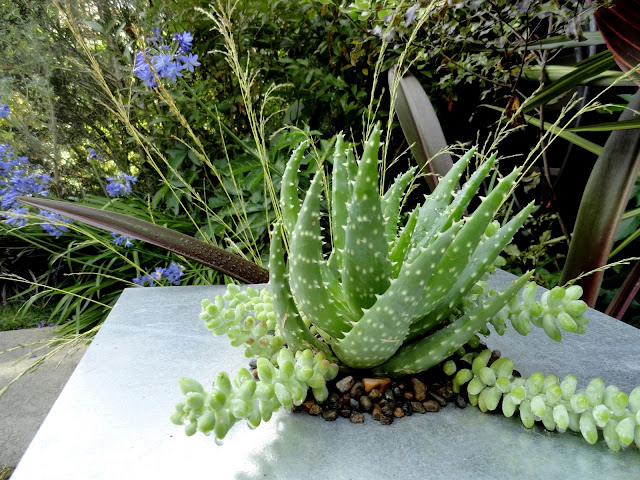 I walked into the garden looking for a place to put it, and right away realized it needed to go by the beginning of paver path. 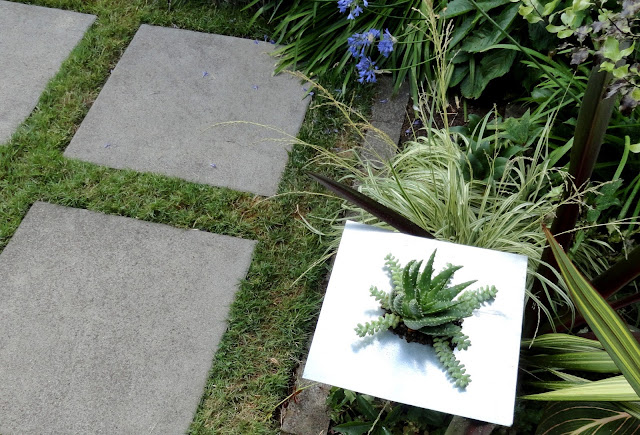 A square by the squares. 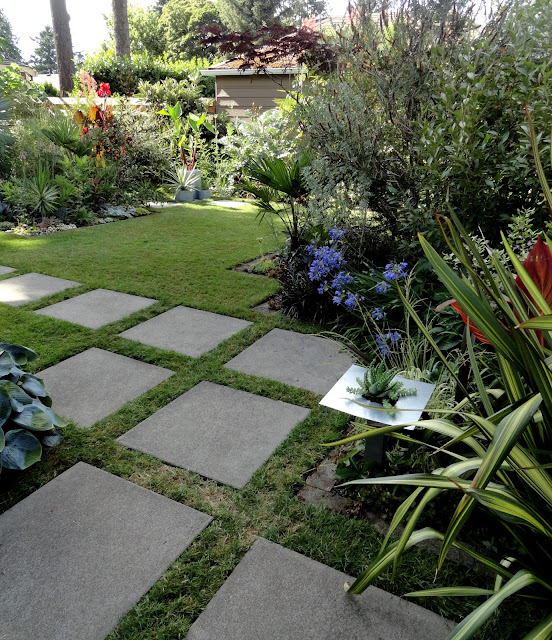 So far reflected heat from the shiny metal hasn't been a problem, however I did drape a shade cloth over it during last weekends intense heat. 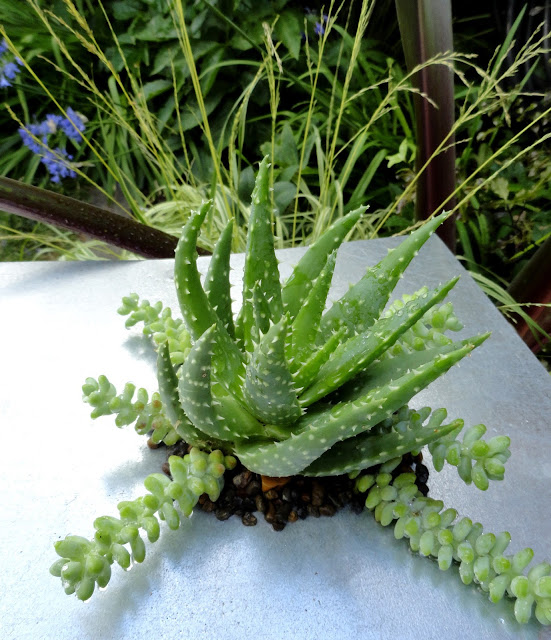 Andrew suggested driving a stake into the ground and sliding the long tube over it. Worked like a charm! 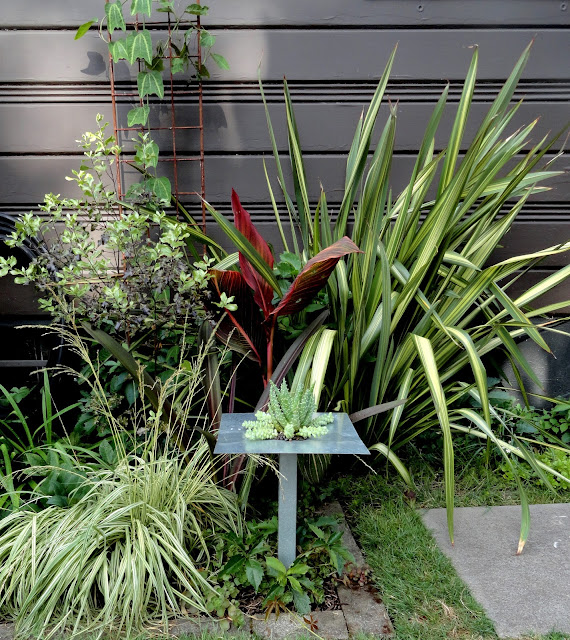 Enough right? Somebody needs to stop me. But I was on a roll... 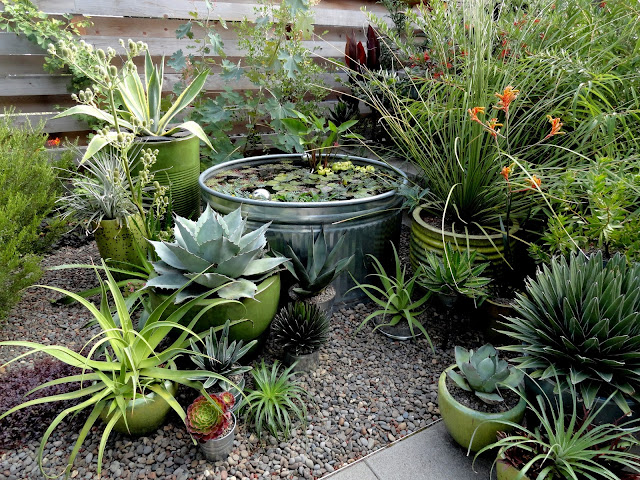 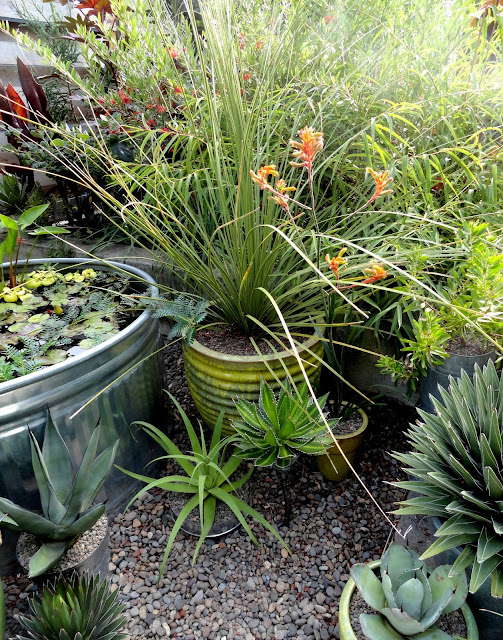 The funnel planter on the right has been around for awhile, although it did get planted up with a different plant (Agave splendida) earlier this spring. The Agave bracteosa is planted in a metal ring, also from the Rebuilding Center (I think it was 50 cents). 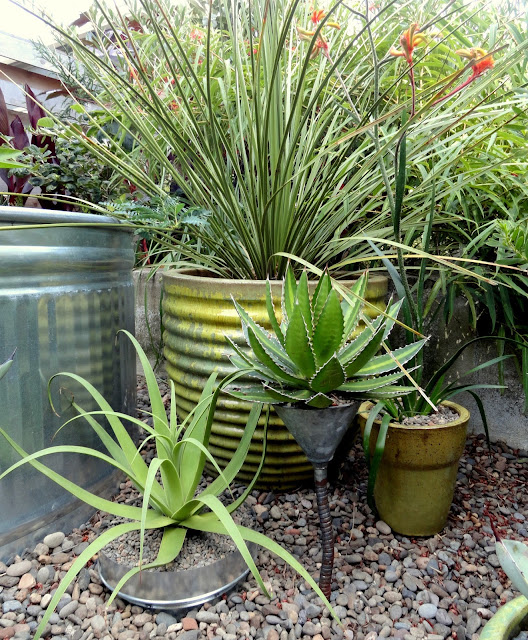 The ring is taller than it looks here. 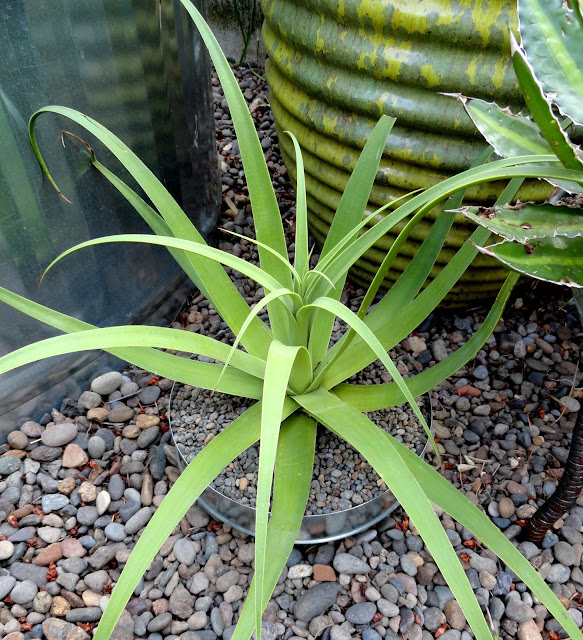 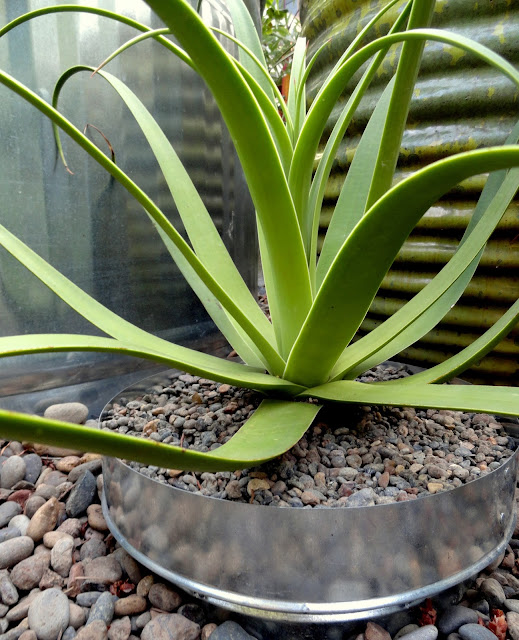 Yes, there's more. Although not all are new. 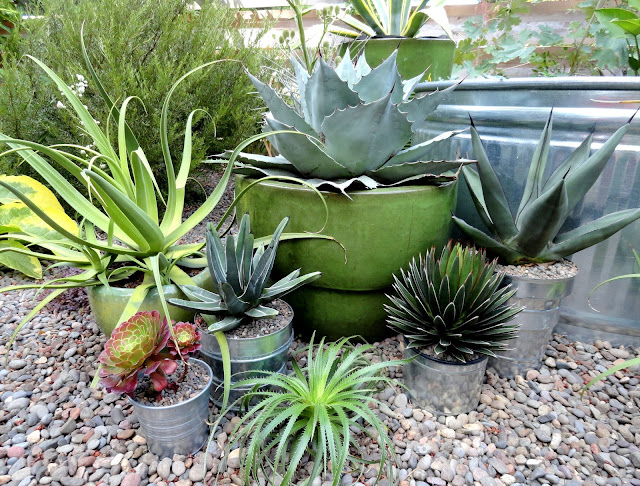 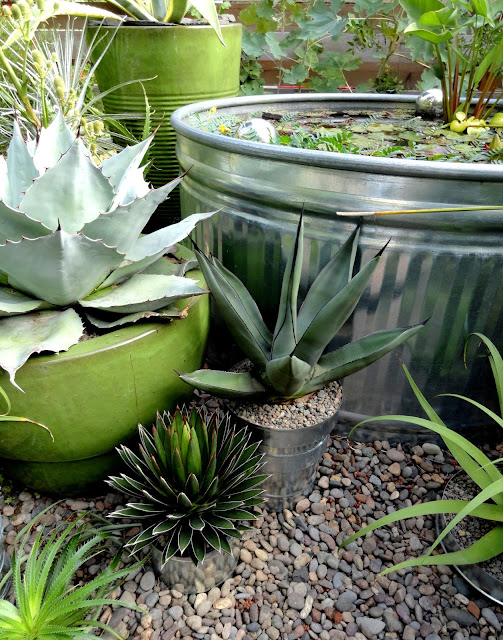 On the left is Agave ocahui, planted in a piece of metal ducting. On the right is A. 'Sharkskin' in a strange piece of metal that has a great Devo hat look, don't you agree? 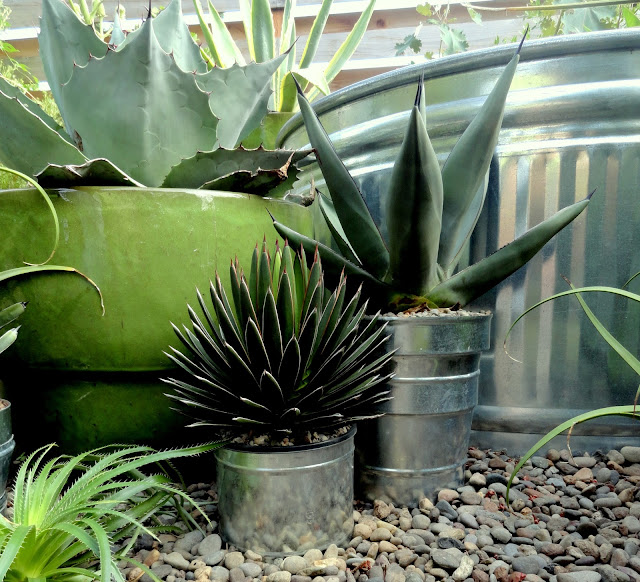 Yep, another re-imagined (piece of metal) planter for the Agave nickelsiae (aka A. ferdinandi-regis) 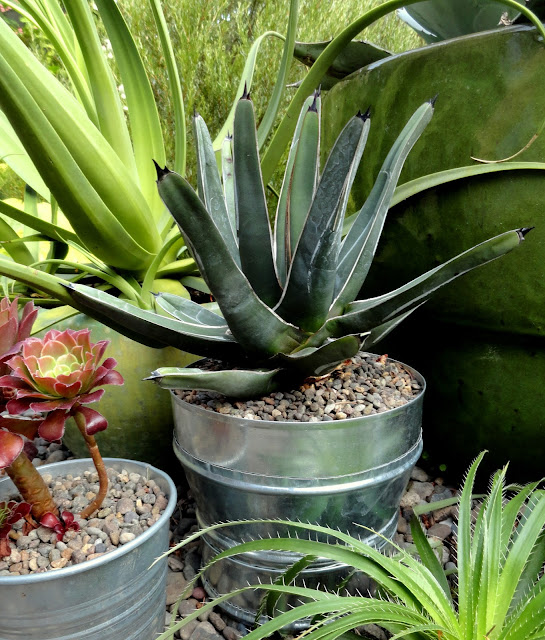 This one came from Cistus (the Agave, not the planter). Look at those fabulous points! 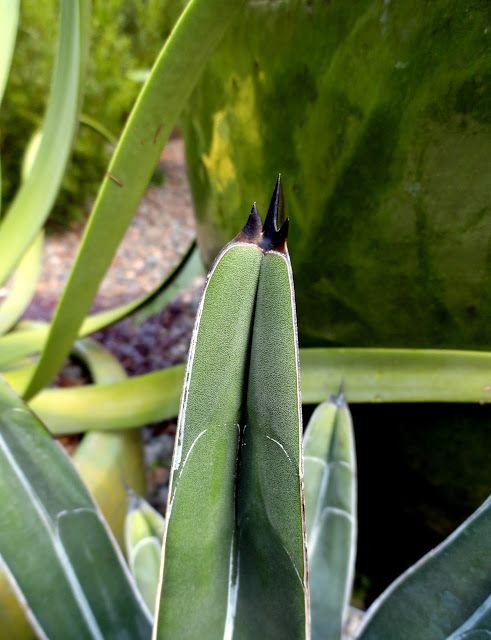 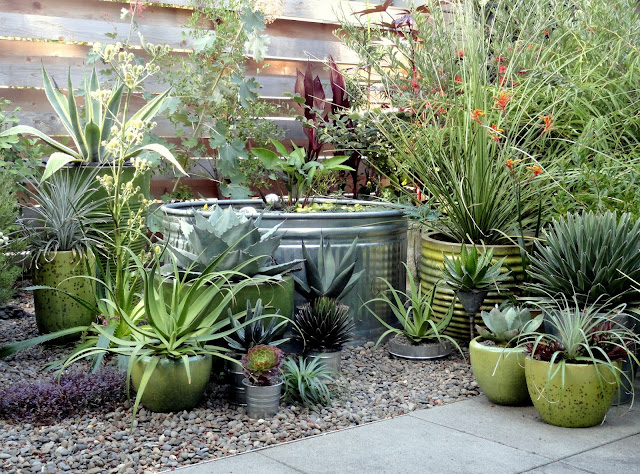