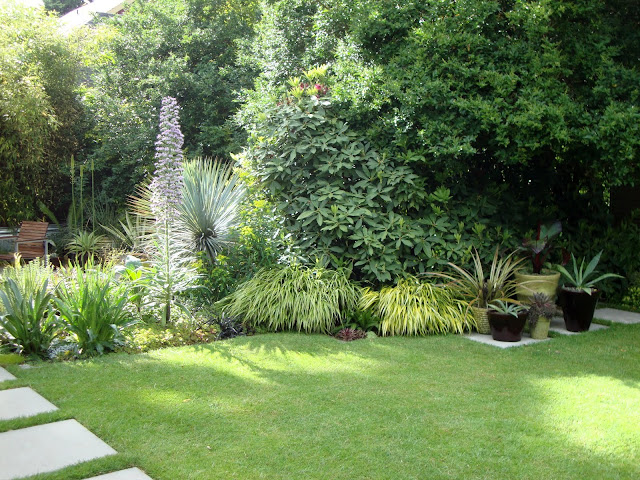 I know ya’ll want me to skip right to the after shots don’t you? (two of you do at least) Well I’m going to ask that you indulge me a bit as I post a few before and process shots. You see I find myself using these project posts as a sort of record of the gardens progress. So you get to see a few pictures as the Rhody came out, not as many as I would have liked as I seem to have forgotten to take pictures as I hacked back the foliage for a couple of weeks to get to the stumps. During this time I was working on finishing up the Bishops Weed project and would just take a few quick moments to fill our yard waste bin (and the neighbors) each week.

Above is a photo from last summer, when the Rhody was happy and healthy. Below, the photo I took the day I realized something was wrong (mid March)… 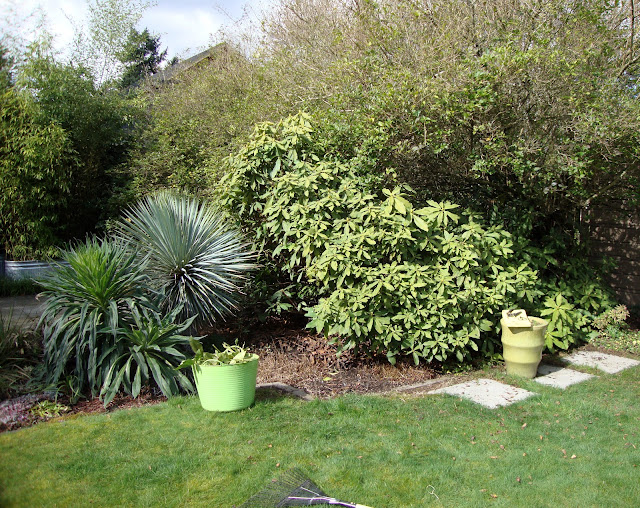 And these were taken April 2nd after I cut back all the small branches, and was ready for the husband’s assistance. 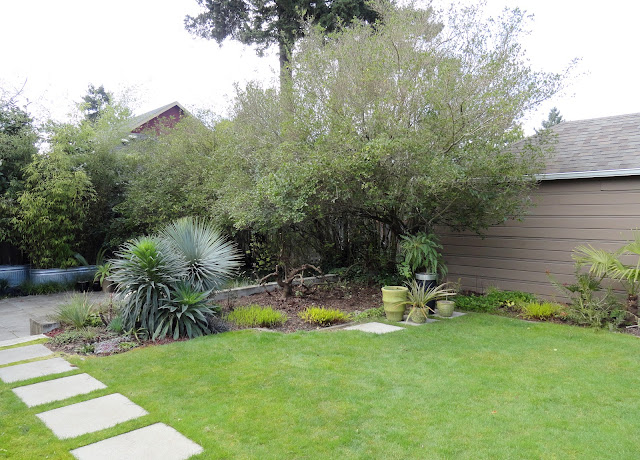 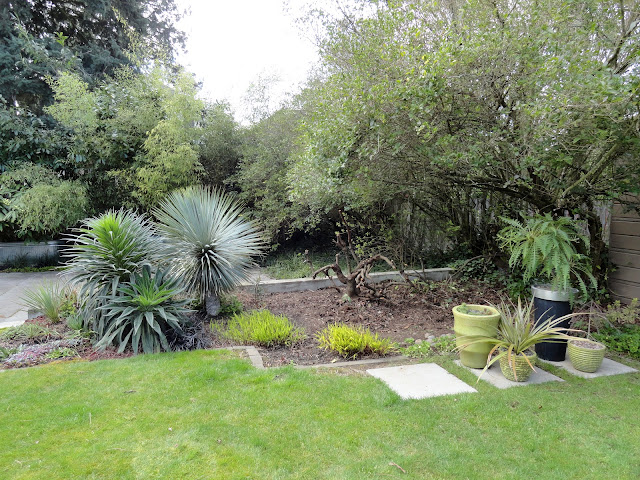 Originally I thought there was only a single Rhododendron, but discovered there was actually a pair, as well as a couple of Laurel starts and a good sized bit of Holly. Oh and Ivy, lots of Ivy. 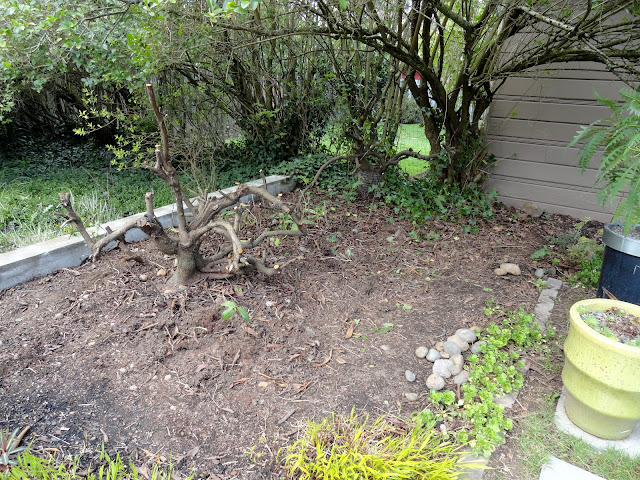 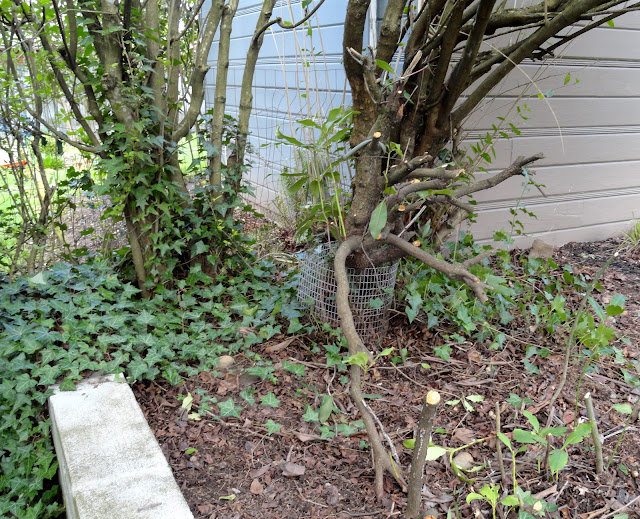 My other discovery...from the patio you can now see the dual paint job on the neighbor’s garage. I painted the side we see a sort of earthy tan color back in 2010, then the house sold and the new owners painted the house and the sides they see a light charcoal. Now we can see both colors as well as a small strip neither of us painted (but I will sometime soon…). 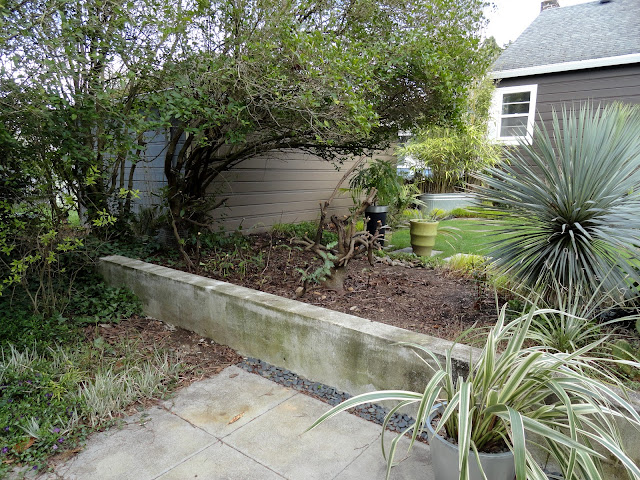 I thought the stumps had a simple kind of beauty and briefly considered leaving them and trying to grow something over them. Then I realized that was a stupid idea as they weren’t actually dead and most likely would sprout new growth eventually. 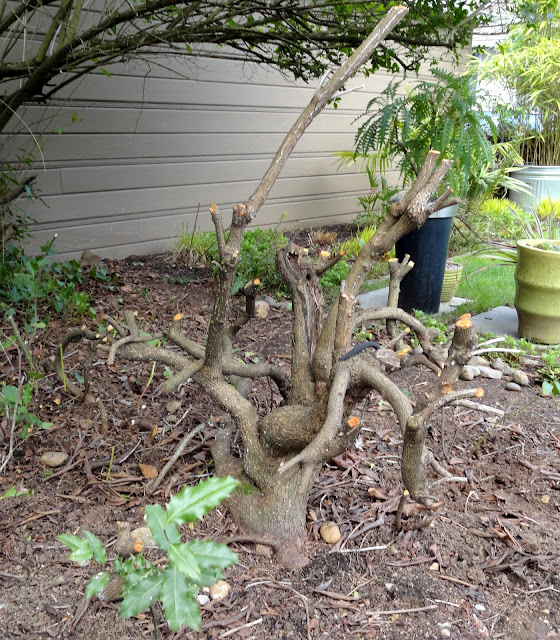 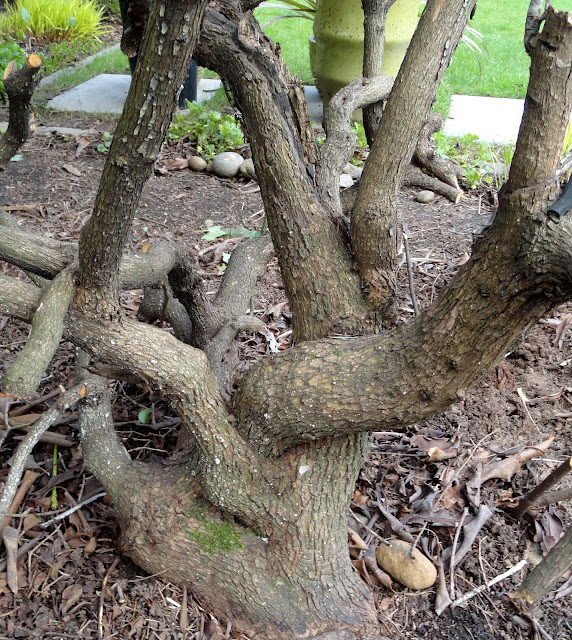 Fast forward to the day of the HPSO sale (April 7th)...I returned from the sale to discover my husband had been inspired. While I was plant shopping he was hard at work removing the stumps and the other plants. 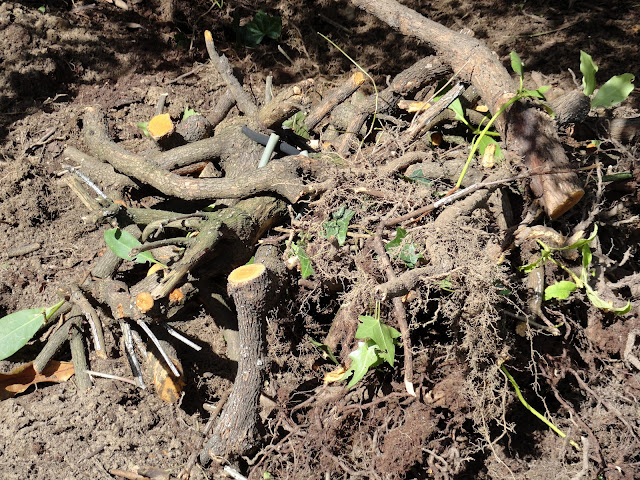 Oh and breaking the shovel in the process. 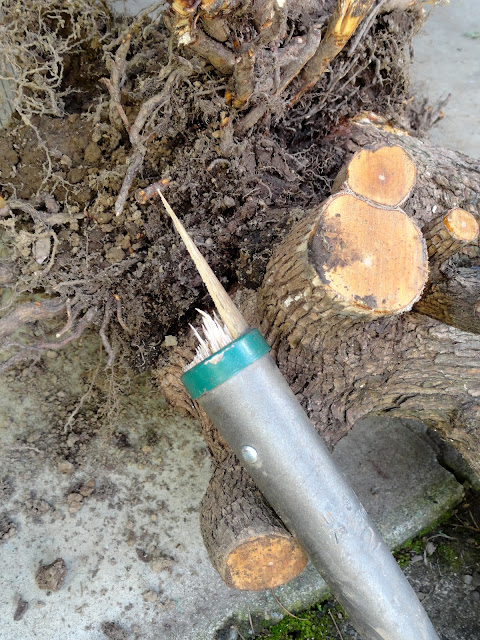 Because I’m not one to miss an opportunity I took advantage of his willingness to sweat a little and we also thinned out some of the low branches on the Priviet. All the better to let light into the new planting area. 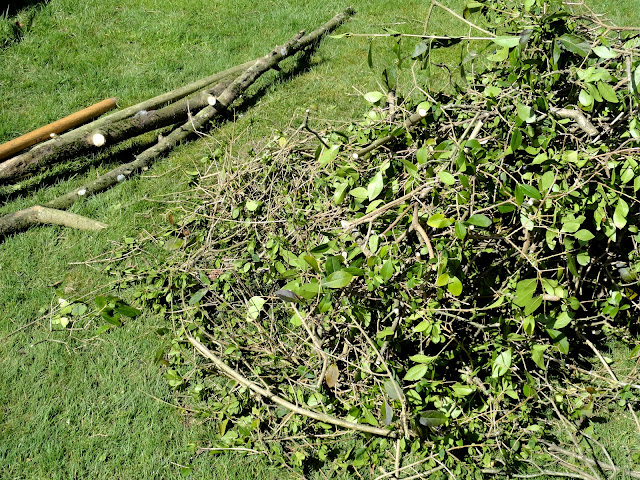 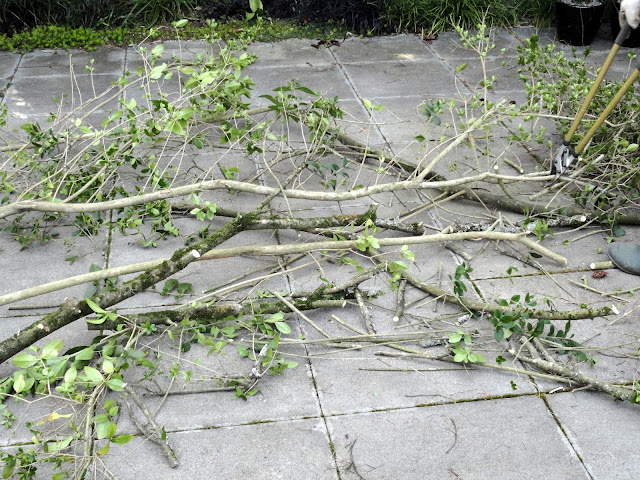 You might recall that was also the day I bought lil’ Sanford. He was quickly placed in his new home, but not planted, that took awhile as I needed pull the Ivy, dig roots and find a few wheelbarrows full of fill to build up the soil and replace what was lost when the big roots came out. 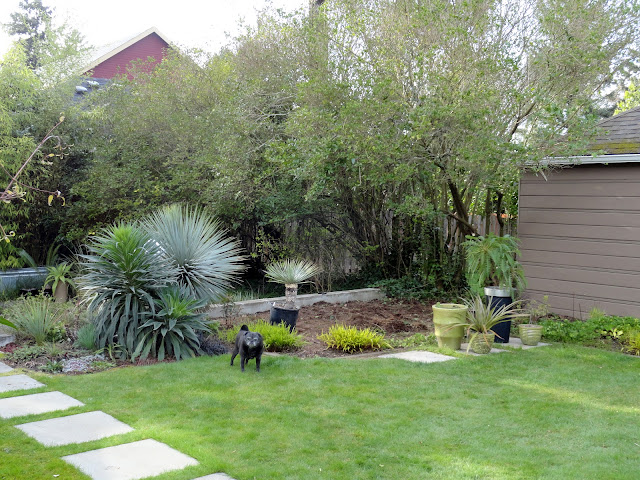 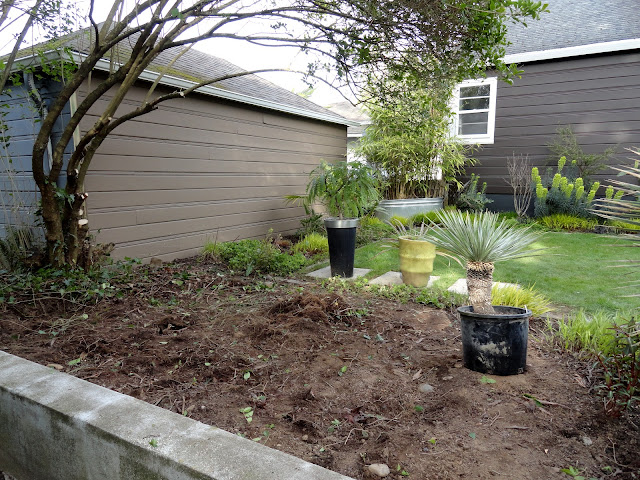 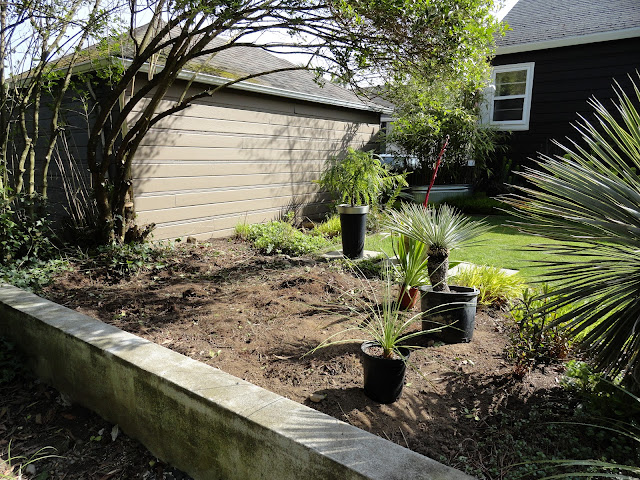 Finally it was time to place the plants and a attractive and fairly large rock we’d unearthed years ago in the front garden but had never really put it to use. Photos taken April 29th 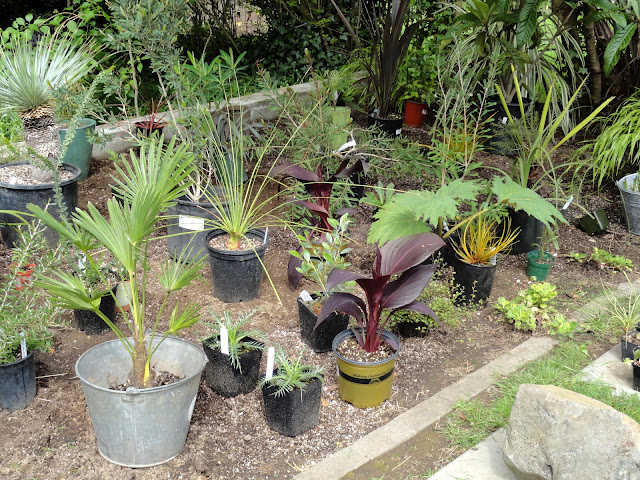 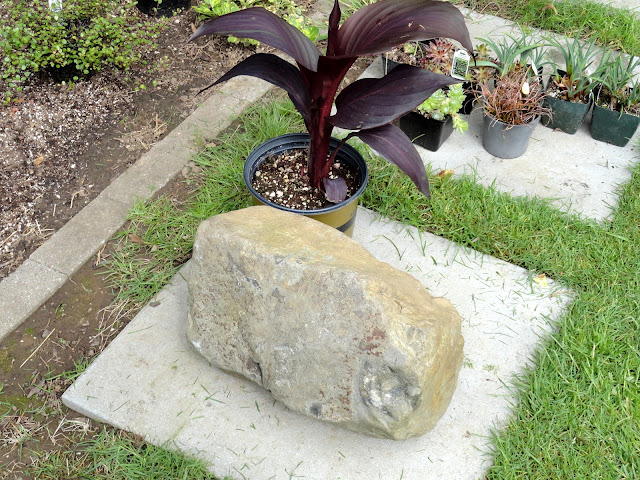 My problem quickly became evident…this was a HUGE space to fill (8 ft by 17 ft) and very visible. This is the first thing you see when you walk into our back yard and is right next to the patio. So I wasn’t planting for interest from just one side but two. Plus we could now see into the neighbor’s back yard…not ideal. The former Rhody wall had performed its job in a way that was going to be difficult to replicate immediately. 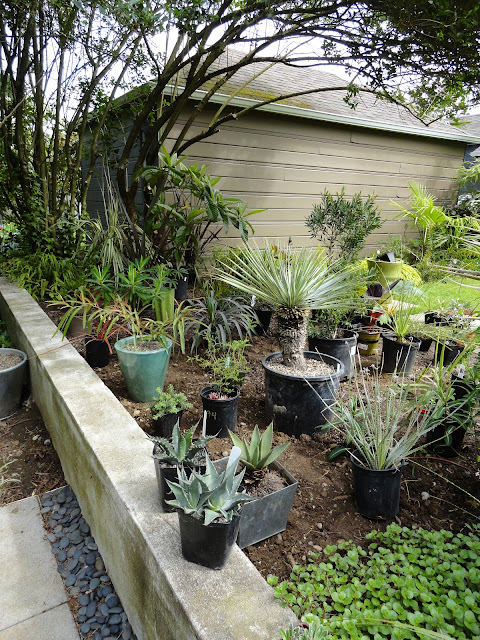 In addition to becoming the “catch all” for all of the plants I had purchased the last few months, this area also became a great place to put things I’d bought previously and were in containers or spots that weren’t the best. Like this Trachycarpus wagnerianus. 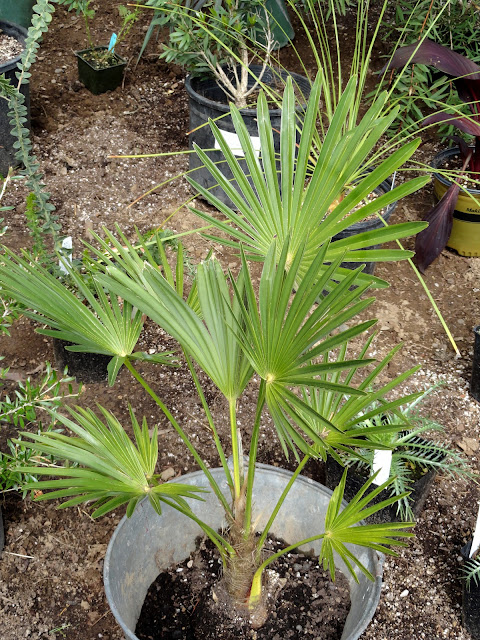 I guess that’s my way of saying very few of the plants that went here were bought with this space in mind; it was not a “designed” planting. I made do with what was available, things I had been accumulating. Sure I bought a couple of things especially for this space (like lil’ Sanford) but if I had made the decision to remove the Rhody and plant up the space (rather than just being faced with its demise) this area would have ended up looking entirely different. So that’s my intro, tomorrow what I ended up with…