Since we’re on the subject of Agaves (we were right? See yesterday’s post) I thought I’d update ya’ll on how my “in the ground” Agaves are doing, since we haven’t talked about them since February. Of course you know that means a bit of a weather report. Last weekend here was nothing short of amazing, sunny and warm…we actually hit 82 on Sunday! April as a whole has been rather nice, better than the last two years at least (2010 and 2011 we didn’t see 80 degrees until June). And much drier then March (2.55 inches of rain so far in April, compared to the 7.75 inches in March). I’m hoping we’ve turned a corner and from here on out things will only get better.

We'll start the show with the Agave Americana’s…(there are three of them), although they’ve lost a few leaves they still are looking pretty good 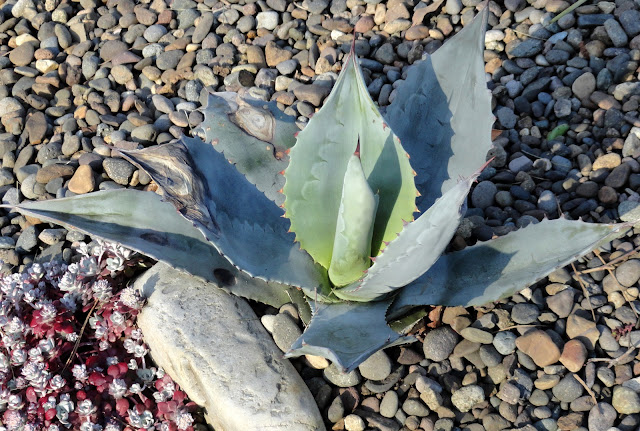 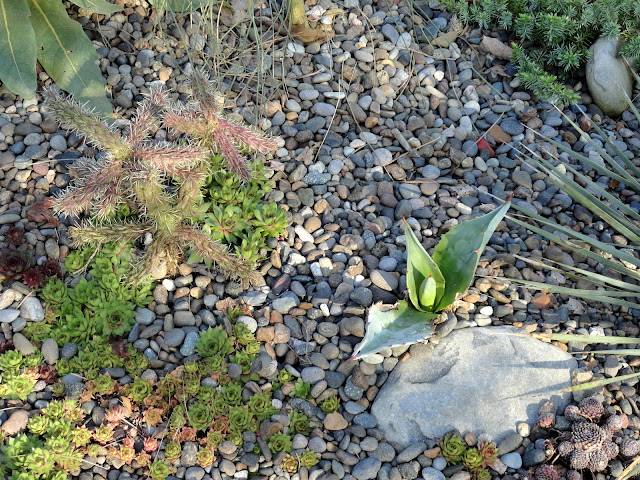 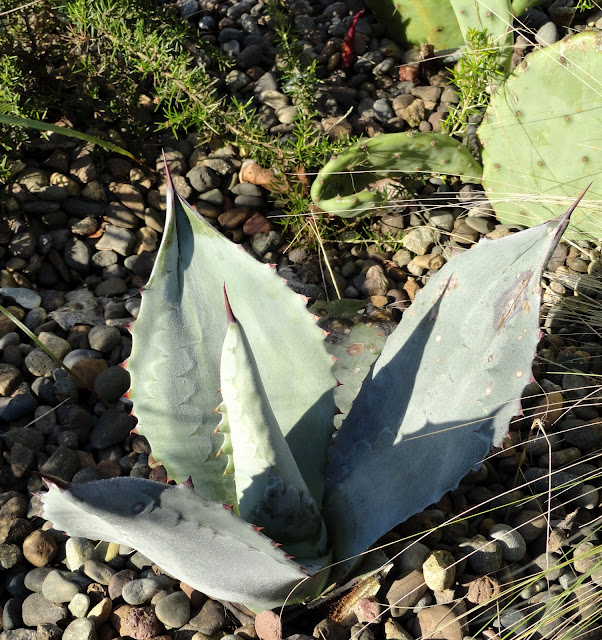 In fact a few of the pups even made it through the winter! 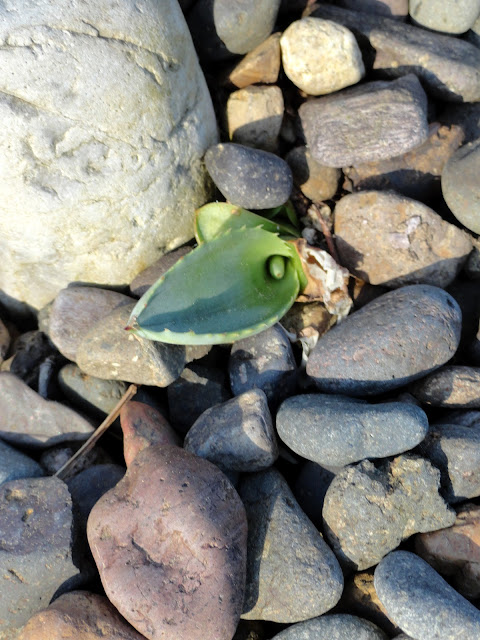 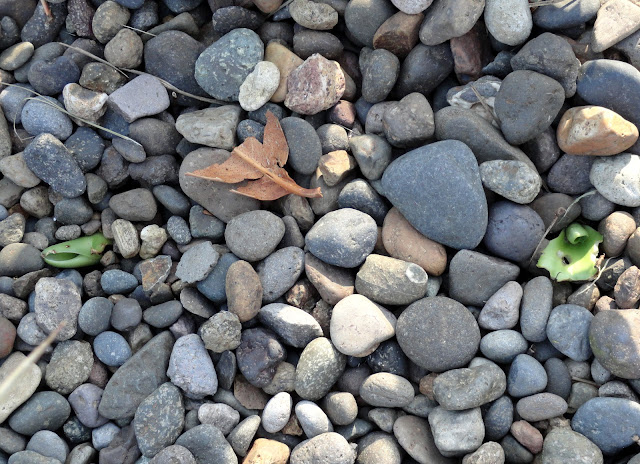 Moving on… Agave bracteosa lost a couple of leaf tips but all in all looking fabulous! 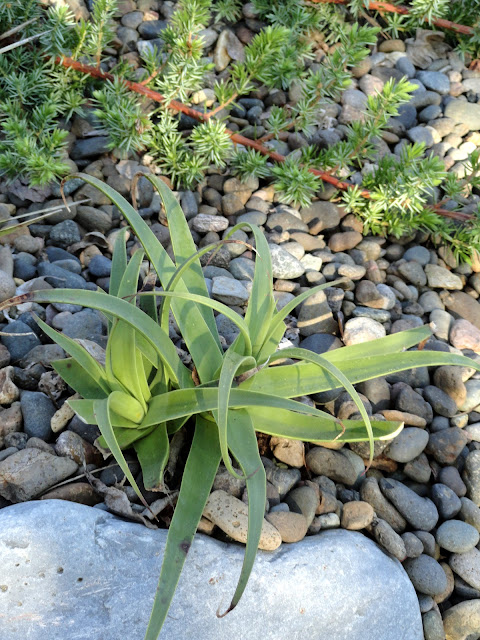 As is Agave parryi 'J.C. Raulston'… 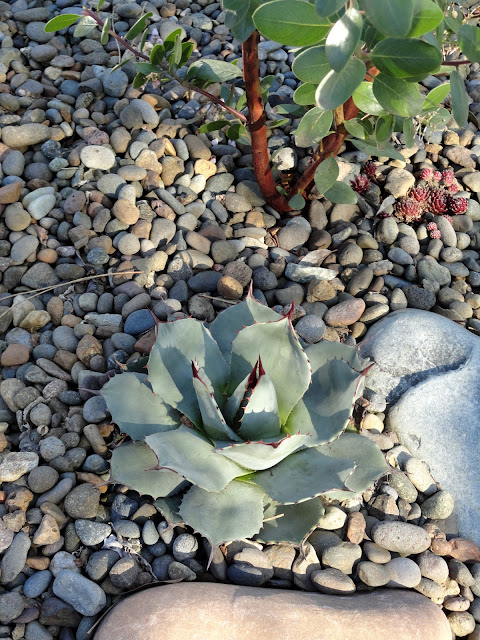 The only out and out casualty in my garden was Agave americana 'Opal'…it’s gone to Agave heaven. 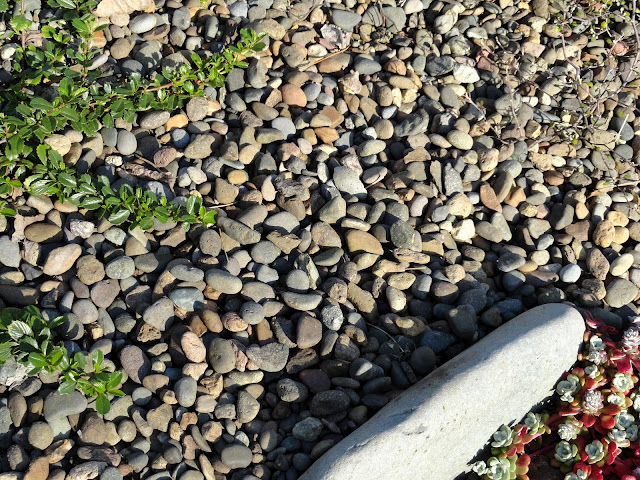 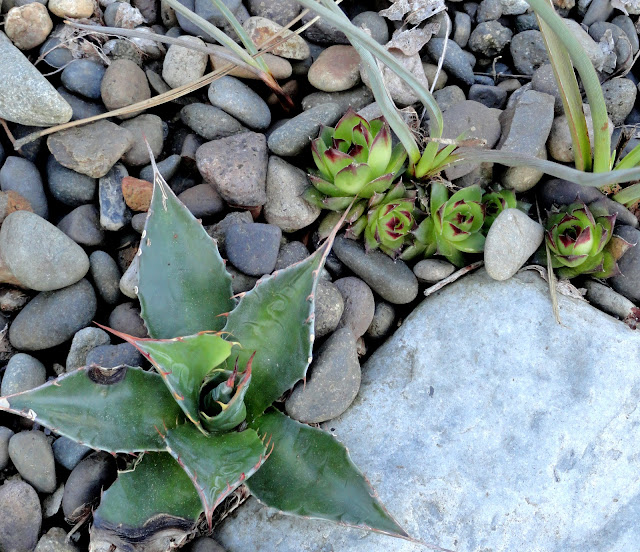 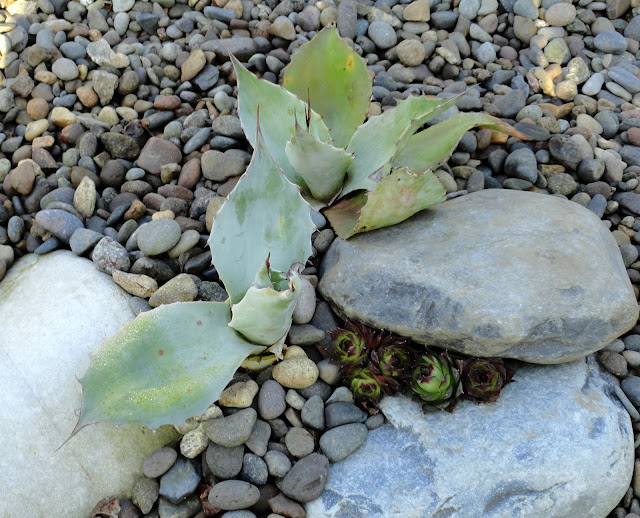 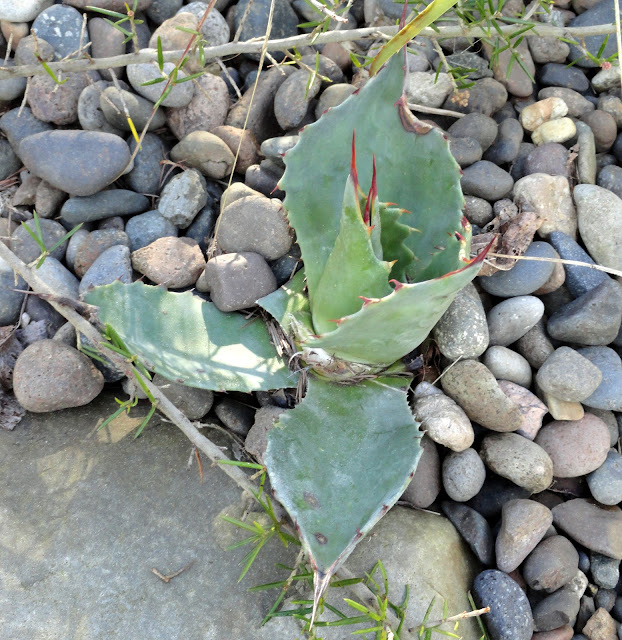 Agave parryi var. parryi in the back garden keeps on keepin’ on. Sorry for the blurry picture but moments after I took this shot I dug this plant up and couldn’t go back and take another. Why was he dug up? Well let’s just say sometimes one project (replanting the Rhody area) leads to bigger projects, I’m pretty sure you know what I’m talking about. 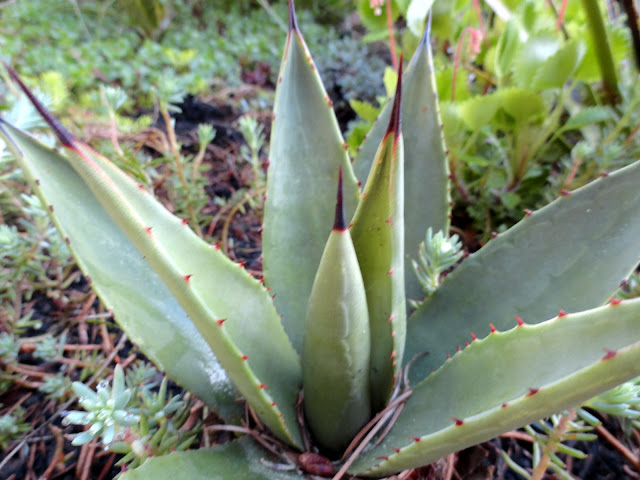 Agave neomexicana, this little guy has done so well, even buried by an encroaching Sedum that I recently bought another. We’ll see…I’m kind of afraid I went a little overboard on my new Agave experimentation purchases…(you know this part is “to be continued”…) 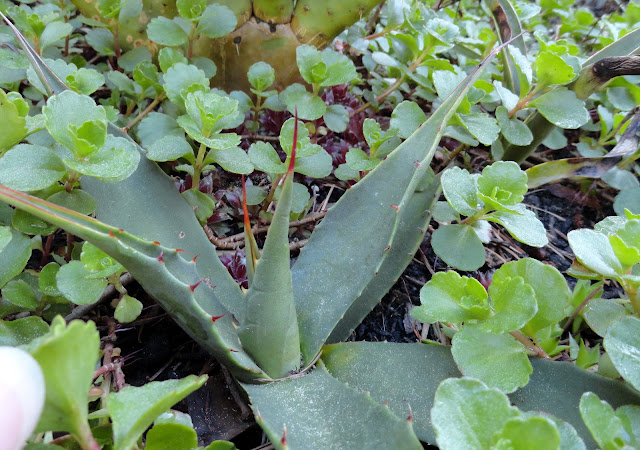 In other exciting news the winter wrap on the Shade Pavilion…(the proportions of which look freakishly distorted in this photo)... 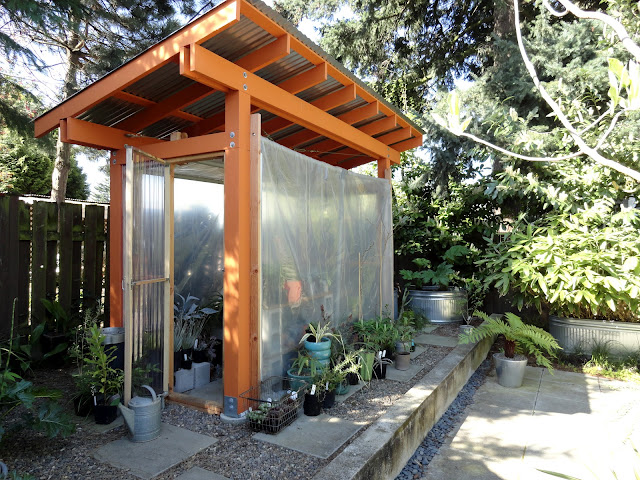 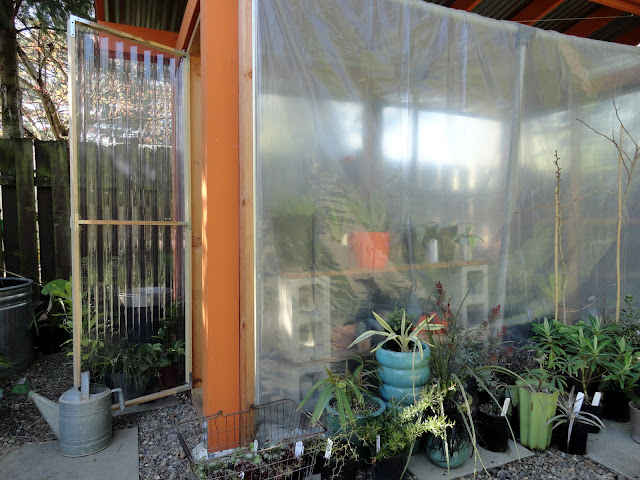 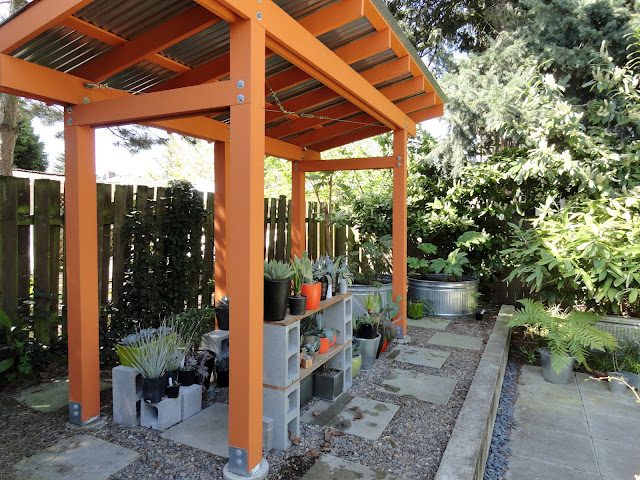 This is a full month earlier than last year, thank god! I’ve been pulling plants out from under cover in preparation for this; in fact it was downright empty! 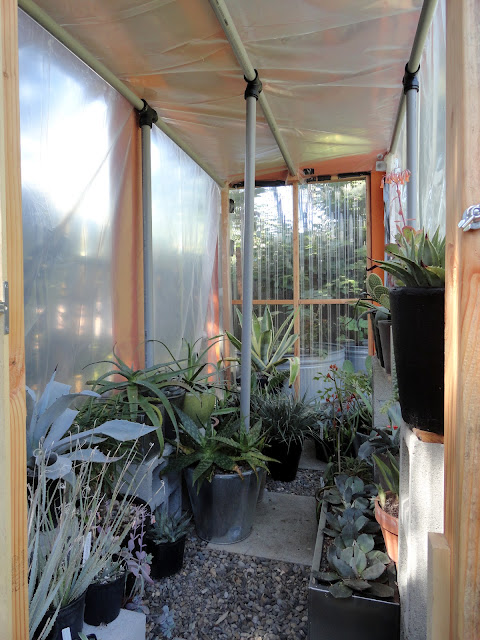 Now that the covers are off I’ll start bringing prisoners up from the basement and parking them here. It’s a good way to ease back into the outdoor life...sunlight is filtered as is the rainfall. 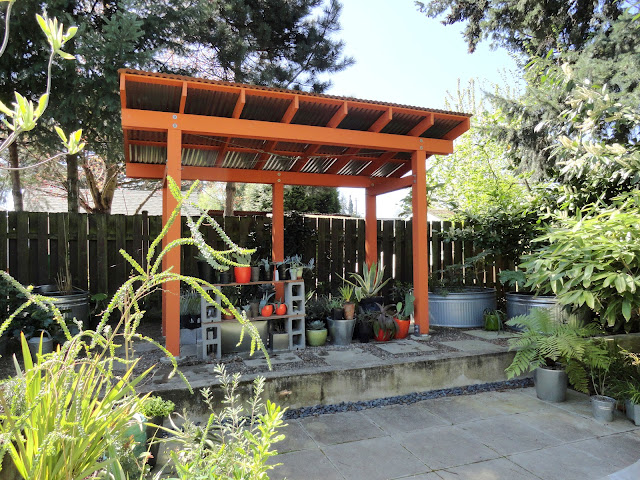