Do you remember my goal to get rid of the Bishops Weed this winter? Well, since there are only 2 weeks left of winter (!!!) I thought I’d better publish a progress report. Or maybe I should call it a “lack of progress” report?

I didn’t get started until the first week of February, and then there was travel to Seattle for the garden show, the Portland garden show, and rain…lots and lots of rain. I’ve only managed to get out there and hack away for part of four days. And it’s slow going! A 4-6 hour stint only gets me through a patch about 2ft wide and the length of the planting bed. This is what I managed to accomplish last Sunday (the bare soil), my prior work is on the right, and the part yet to be done on the left. Sunday was a productive day! 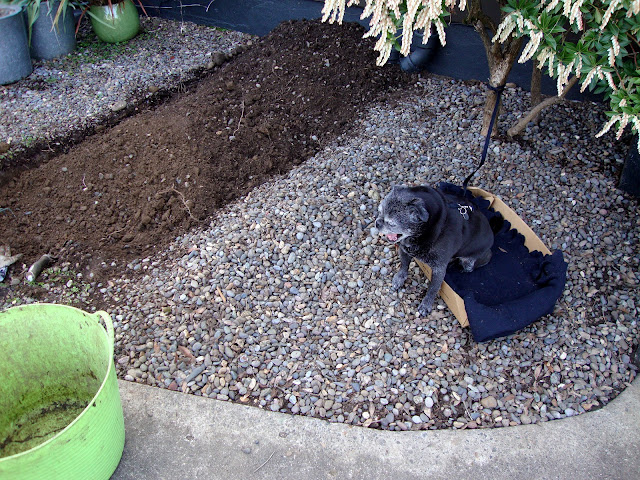 Did you notice my faithful assistant Lila is yawning? The tedious work is even tiring her out. For the most part the roots are easy to spot. They are substantial and look like bean sprouts… 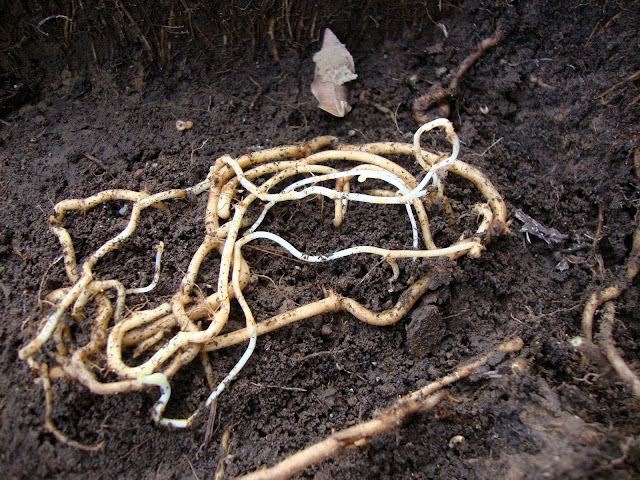 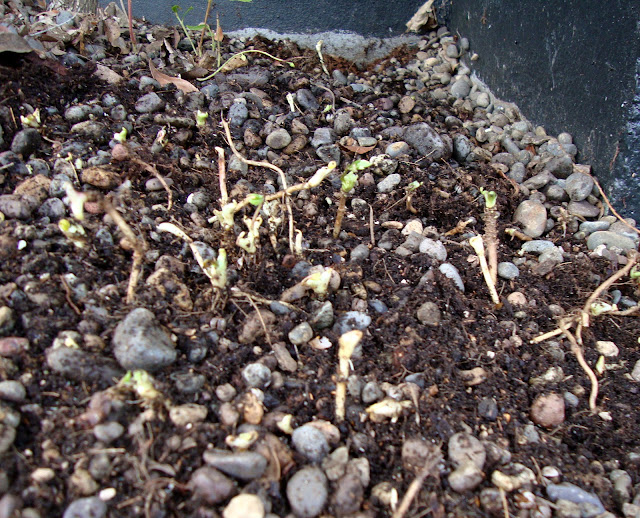 Plus they tend to run along in the top 3-5” of the soil. But then every once and awhile I come to a mass that I can only assume must have been an original mother plant, the ones that were planted and started this mess. Those have thick roots that go down down down…further than I have managed to successfully dig. Did I get enough? We’ll see, but I’m not holding my breath. I think this battle will be waged all summer.

Since I raked the gravel to the side, and not wanting the bare soil I was working to turn into a kitty poop depository I even pulled out the dreaded tarp for awhile, in fact we had a tarp in our front yard for a week! Such a proud moment, at least it’s brown and not blue! 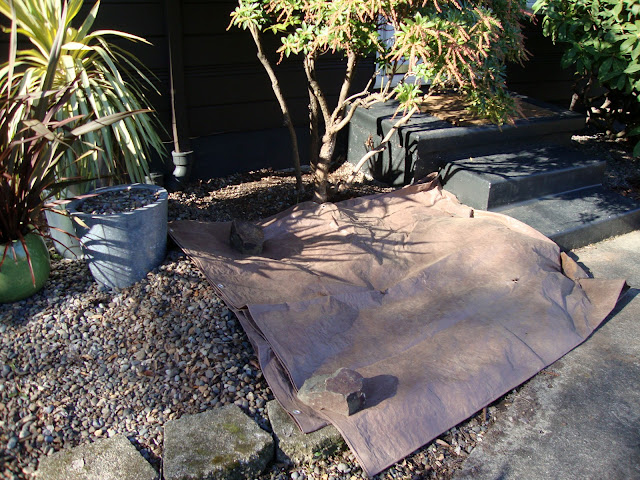 I started out thinking I could dig in such a way as to keep the other plants in the area, but I’m discovering that might be impossible. I dug out this old Kniphofia caulescens, I think I can successfully remove the soil around its base and get all the bad roots out (Speaking of the roots, that’s them curled up where there was a hollow in the bottom of the cement block, nasty!). 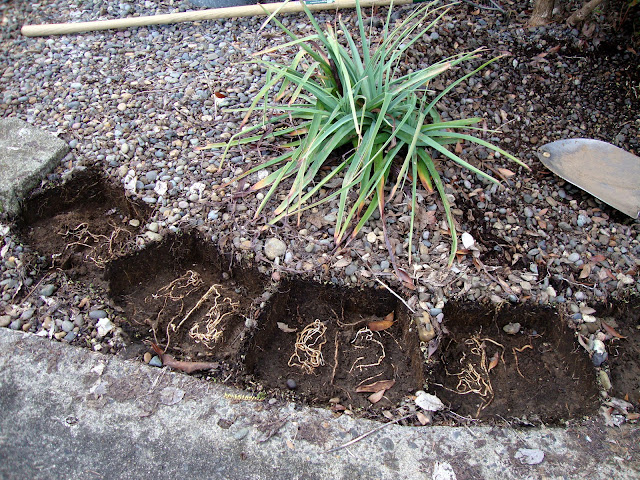 The peonies however are goners. Their soft octopus-like roots were covered and I just couldn’t get them free. Ah well, they were inherited and while I loved them they didn’t really fit in the garden. The next section contains a Hebe… 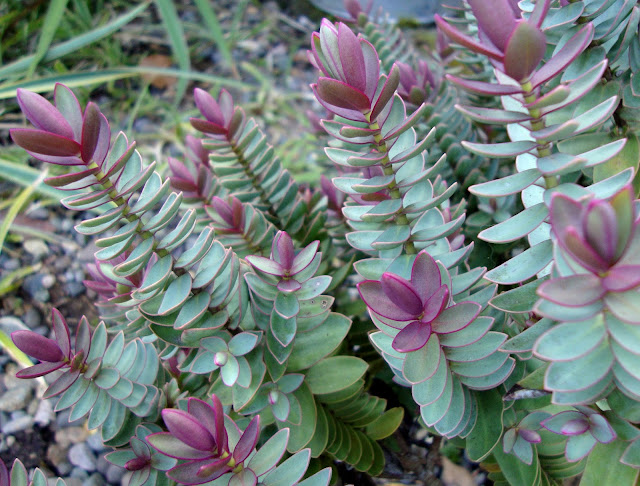 …and a few Yuccas, we’ll see it those are salvageable (thankfully it hasn’t gotten as far as the Fatsia japonica) 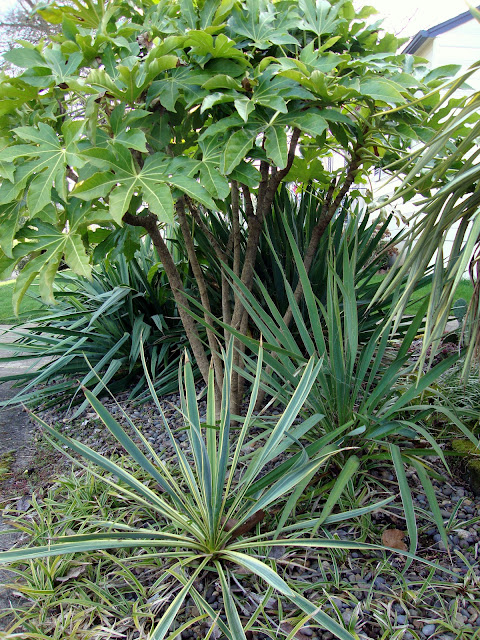 Sometimes I can get into the rhythm of the project and feel a small sense of triumph...I will WIN! Sometimes, like when I look at this… 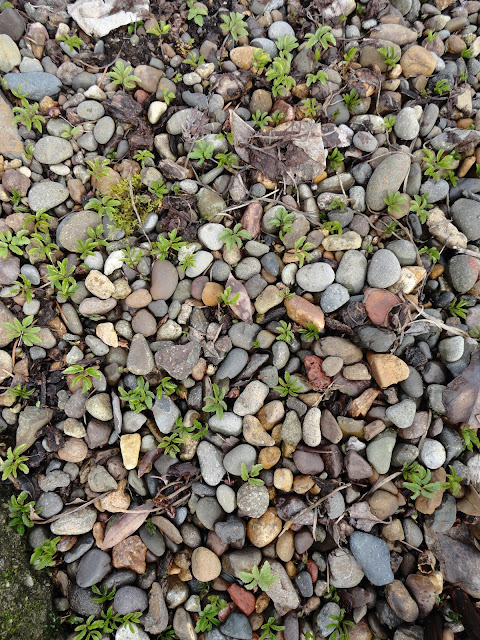 …and realize it’s everywhere and it’s already growing, I get overwhelmed.

Given that the weed is still mostly dormant, and what's coming up is actually still "pretty," I think my real sensation of moving ahead is coming from the removing the cement pieces I’ve hated since we bought the house. In this part of the garden they serve absolutely no purpose and just create visual clutter. 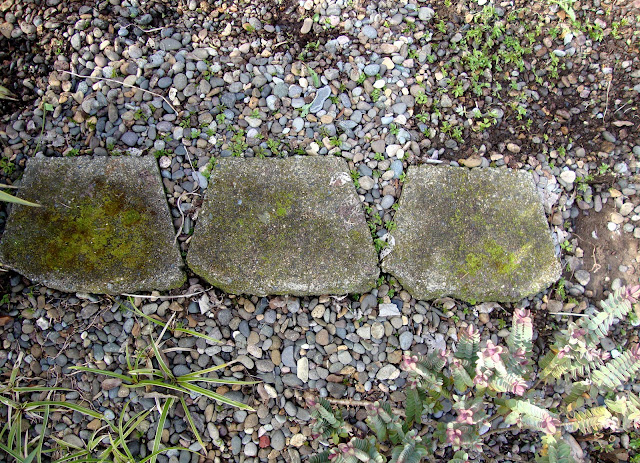 So I keep at it, this week promises a stretch of dry (sunny!) days and I'll be attacking it hard. I may not finish before the end of winter, but since the EVIL WEED isn’t going anywhere I can just keep on working right on into Spring, lucky me.