Then and now, the front yard 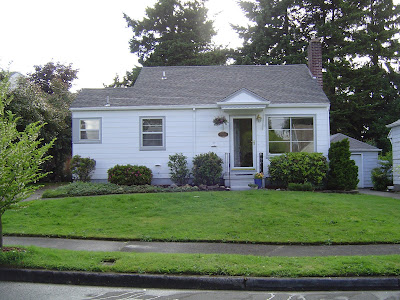 It was definitely a yard not a garden when we bought the house (above – May 2005). All that grass!

May 2006. The grass is gone and the baby plants are in place. But look at the HUGE ALUMINUM mail box. I don’t think we could have found a bigger one if we tried. 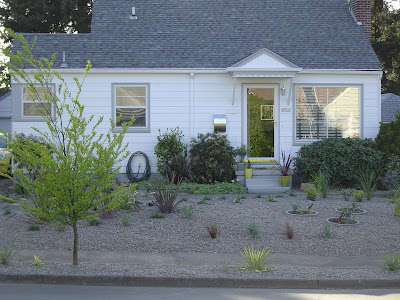 Another one of those ideas that seemed like a good one at the time, the concrete planting circles (above and below). I desperately wanted to pour round concrete planters of various heights around the front garden. I still love the idea and think it would be fabulous! However the reality of budget stepped in and squashed my vision. In a misguided attempt to cheaply replicate the idea I purchased those round scalloped circles that come in 3 sections and buried the scalloped edge in the ground. The circles contained Canna lilies and Kniphofia. I grew to hate the circles.

April 2007, the plants are getting bigger. 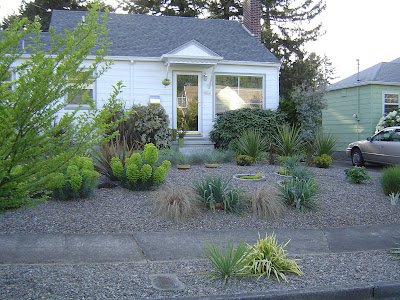 2008 would have been a lovely picture if I had one, just imagine it…

And early this September 2009, on a sunny day, notice the planting circles are gone! I got rid of those earlier in the spring. Good riddance! 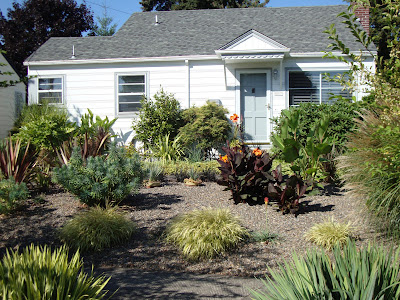 September 2009, on a cloudy day. I’ve removed the eye-sore buried terra-cotta pots (in the center of the above picture) and torn out the huge Miscanthus in the far right corner. 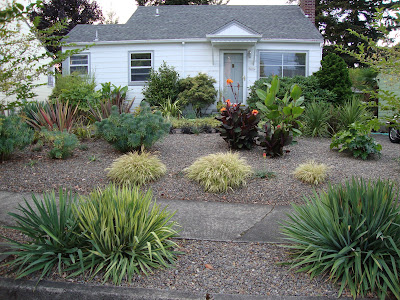 Here’s a little teaser picture of what you don’t see above, and why I tore out the floppy misbehaving Miscanthus …Tetrapanax! I planted a new grouping in the corner of the garden with Tetrapanax, Yucca A. Purpurea from Tsugawa, and a borderline hardy purple Cordyline (which I promise not to cry about if it doesn’t make it through the winter). I can’t wait to have passers bye stopping to stare at the Tetrapanax next year! 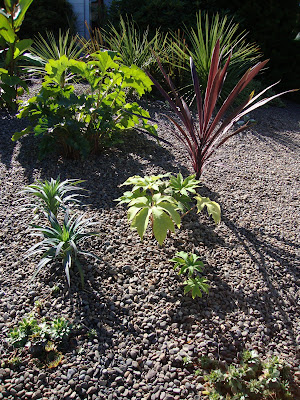