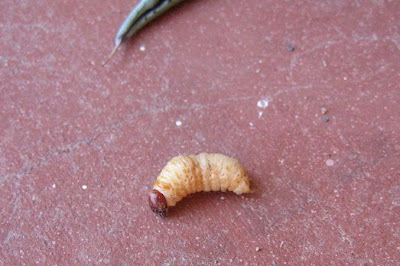 We all have unwelcome garden visitors, Karen from Greenwalks posted yesterday about the raccoons in her yard. I’m hunting for more Gunnera chomping weevils and my friend Steve tells me there is a plant thief in his new neighborhood…bold enough to not only steal plants in pots but actually takes them right out of the ground! Rude!

My brother in Arizona is currently battling an evil beetle that’s attacking his Agaves. Evidently the beetles lay their eggs near the agave roots and then when they hatch the grubs feed on the roots. The agave starts to look unhappy, the bottom leaves start drooping and then when you pull on the Agave it sways side to side because the roots are disappearing. This is frustrating enough when it happens to a small plant but now he’s noticed that a big mama Agave in the front yard is under attack. It’s not looking good. To quote my brother “it will fall over one day and that will be the end.” If I remember right he said they tend to favor the dark blue/green varieties over the Americana.

His first run-in with this creature was a few years ago when his yuccas starting dying. He lost several mature plants. Evidently they especially love the yucca roots because they are fleshier than the agaves. I’ve always thought of yucca as being invincible, and loved them for that. They seem to grow in the most horrible conditions and thrive, that is until the evil beetle bastards get at them.

Here is a picture of a beetle chomping away – it’s a little hard to see but the black oval in the center is the back side of the beetle. 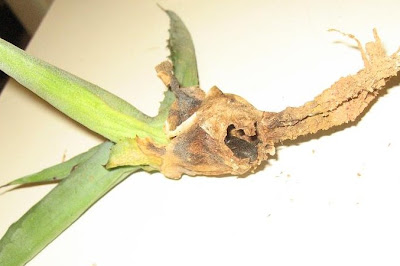 Here is one of his agaves…with the roots cleaned right off... 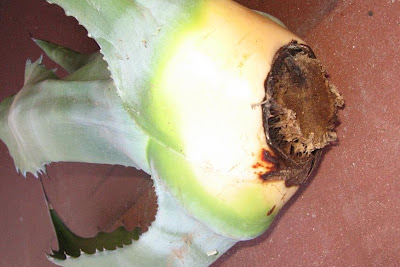 The very top picture is one of the grubs. Have any of you had to deal with this horrible pest? We would love to hear about your battle, especially if you won. Any words of advice for my brother?