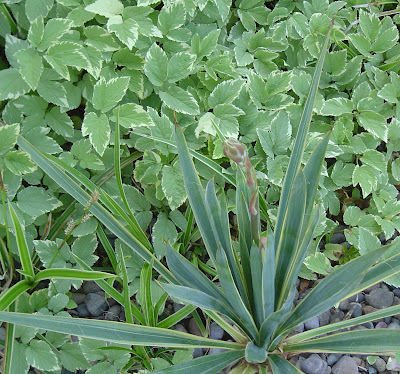 I love yucca, and I love them even more when they’re blooming. Maybe because it’s the closest thing to an agave in flower that I’ll ever see in my garden. Last night I discovered an emerging bloom spike on a yucca I just planted a few weeks ago (above). I bought several this spring when I was on a hardy plant buying kick, when the deaths of my flax and cordylines were still fresh in my mind and I vowed I would only buy tough plants that could take freezing cold, snow and ice (that resolve lasted about a week). After finding one yucca bloom spike I naturally had to go on a hunt to see if there were others. There are 10! 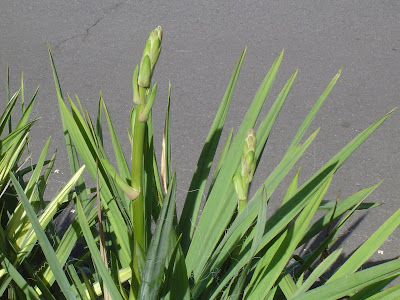 At the Recycled Gardens spring sale last year I picked up a Dracunculus vulgaris, (Dragon Arum) from the same Family but different Genus and Species as the Sauromatum venosum, (which I had been anticipating seeing in bloom, until our dog got to it first). The flower on the Dracunculus is also very striking and it is reported to have the same rotting meat odor. The leaves are a little frillier, not as large and dramatic but still beauties, and he stalk still has the same fabulous dark brown spots. I’ve been admiring the leaves for weeks now and last night I discovered that it’s going to bloom! This one tricked me by pushing out leaves before the flower, where as the Sauromatum sends out the flower long before the leaves. 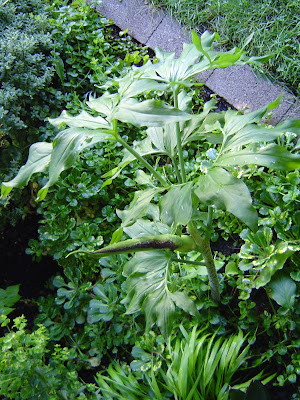 The big surprise of the evening came when I saw a small but unmistakable red flower spike on a Hesperaloe parviflora, on a plant I’ve had for 3 years. It was blooming when I bought it but never has bloomed since. 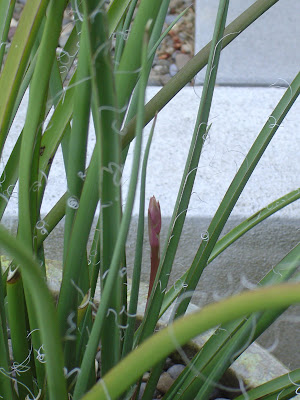 And the bloom spike on my newly purchased (earlier this year - already with the bloom spike showing) Hesperaloe just keeps getting taller and taller, I couldn't fit the pot and the bloom tip in the same photo, spring is such an exciting time in the danger garden! 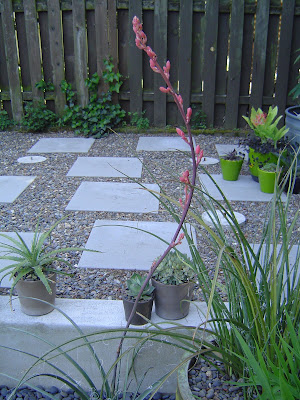