I had to start sometime...

Our September weather was dreamy. Well, that's my take on it. Not everyone feels that way. Many are worrying about the lack of rain. I can't get too worked up, knowing that it will show up eventually—it always does. Meanwhile I am still enjoying the sunshine, but with cooler temperatures.
Rumor has it that Tuesday the 27th's 90 degree high was a record, the latest in the year that we've hit 90 degrees.
There have been oh so many records set this year! If not for a random .03" of moisture at the official recording station, we would have blown away the record for days without precipitation, a full three months with nothing. Plus August and September were both the hottest of those months ever recorded.
We actually had measurable rain last Thursday, almost a whole quarter inch! That sounds like more than it looked like, concrete under trees wasn't even wet. But now it's back to sun and warm temperatures in the 80's, what a start to October!
Those of you who've been reading faithfully for years know that the fall migration has to start at some point—containers and non hardy things moved under cover for the winter months. Usually I follow forecast and get going with the beginning of the rain. But when there's no rain...
Well, since there are so many things that need to move I decided I'd just go ahead and get started with the non-hardy plants that want to be dry over the winter. My schedule had a day open last week so even though it felt a bit premature—ridiculous even, after all there are temperatures in the 80's forecast for this week—I cleaned up and carried plants into the basement, like this Echinocactus grusonii with it's cute lil baby. 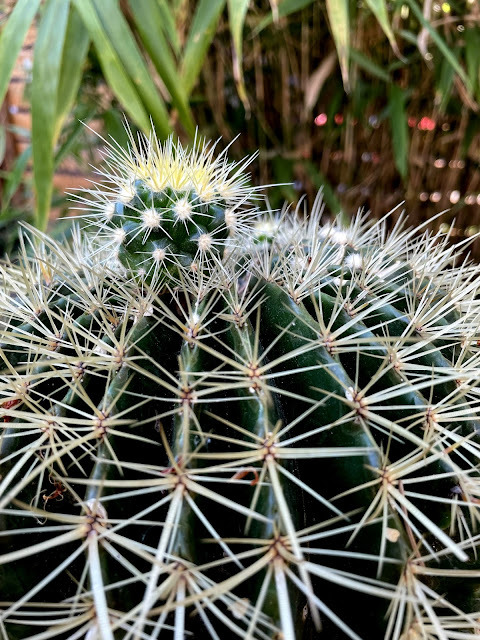 And this red-headed Irishman (Mammillaria spinosissima?) that came from Alison. 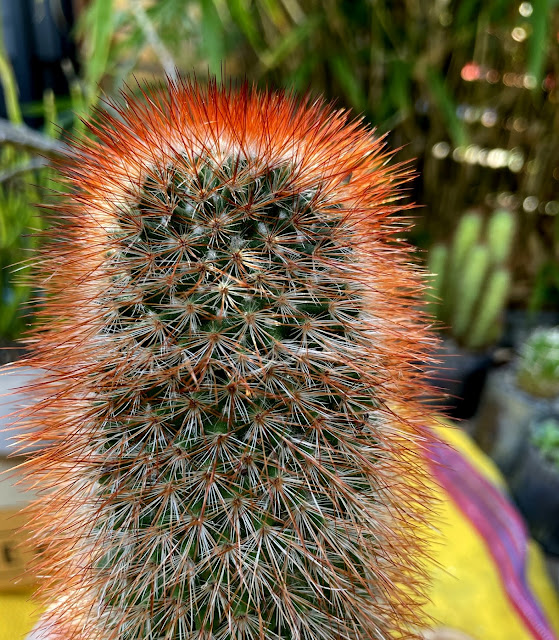 Two very different euphorbia, in the front E. platyclada and in the back E. tirucalli. 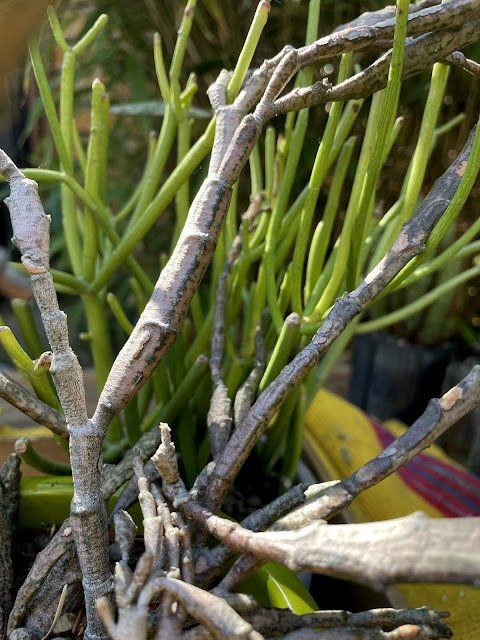 This strange mash-up came about because I had some "leftover" plants and nowhere for them to go. It worked out pretty well! 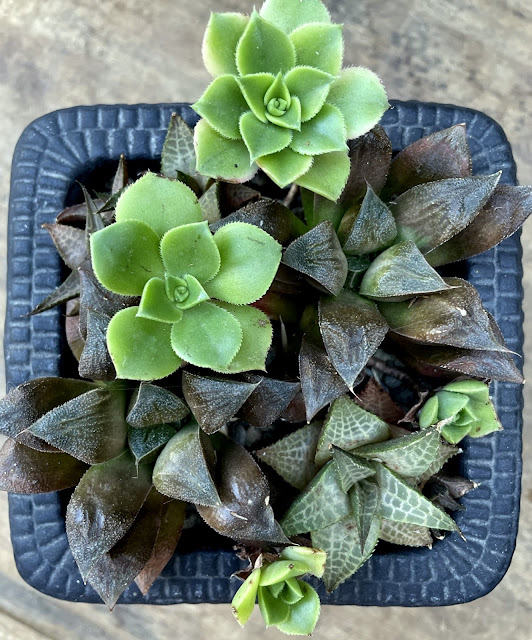 Haworthia tessellata in the front, maybe H. splendens behind it and then a NOID aeonium that I think might be 'Kiwi' that just hasn't gotten enough light. 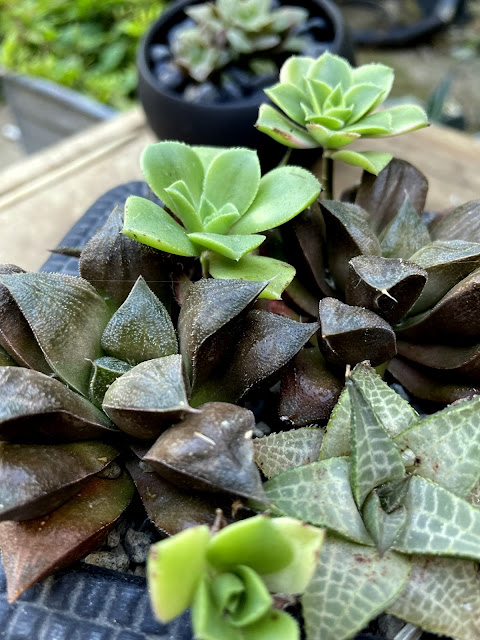 This is exciting, a split trunk on one of my Pachypodium lamerei. I think this may have started last autumn, if so that's not much growth in a year. 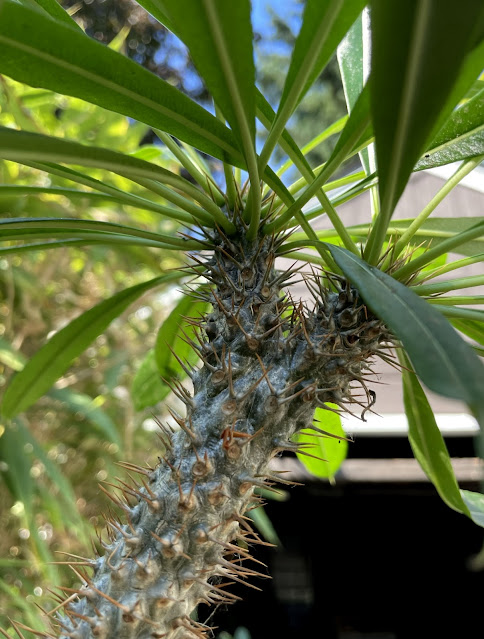 Then again didn't water these guys all last winter and when I took them out last spring their trunks were deflated and bent over—they made an amazing recovery and I vow to do better this winter. Here they are in place in the basement. 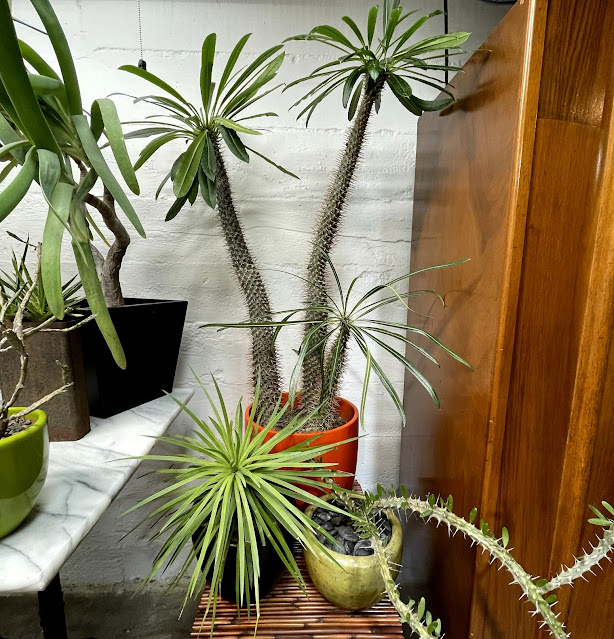 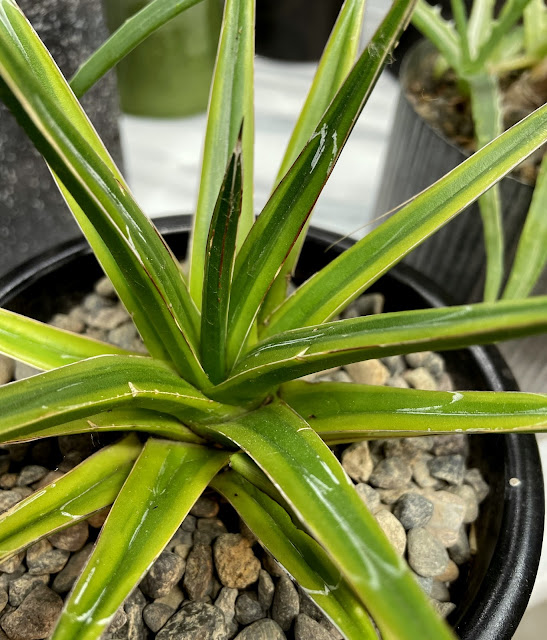 The tufted tip of Agave albopilosa 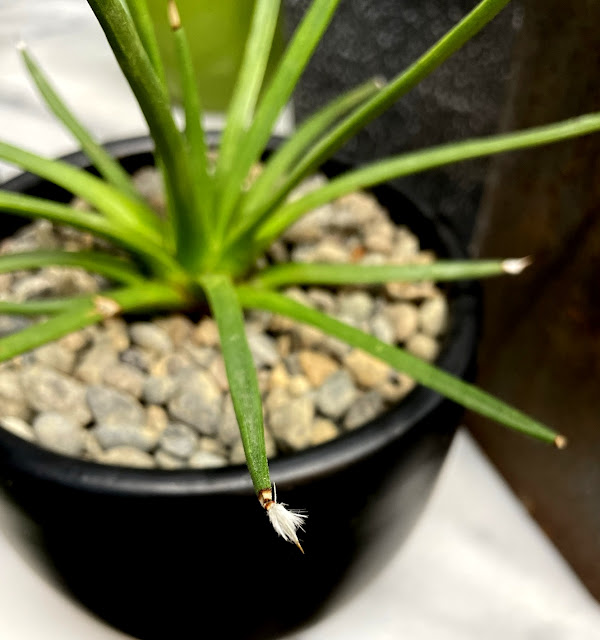 This plant was a gift from my friend Gerhard, it's been such a slow grower. I finally repotted it a couple weeks ago and discovered a very small root system hopefully a little pruning and new soil will get it going. 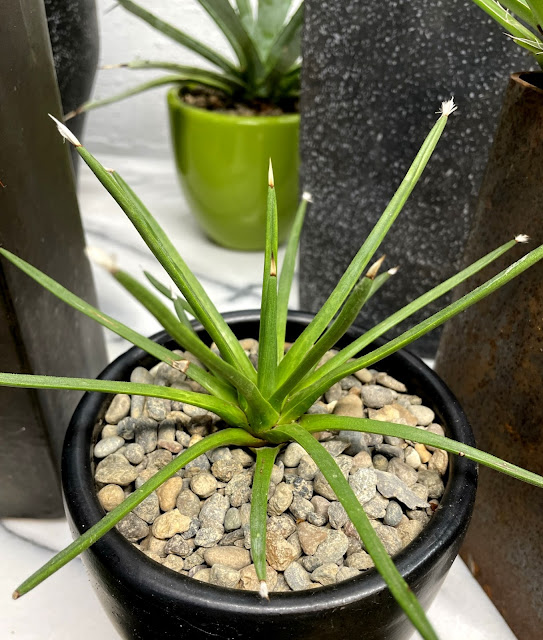 This is the point in the migration where I think "hey, I don't have that many things to move in after all!" I mean look at all that space! 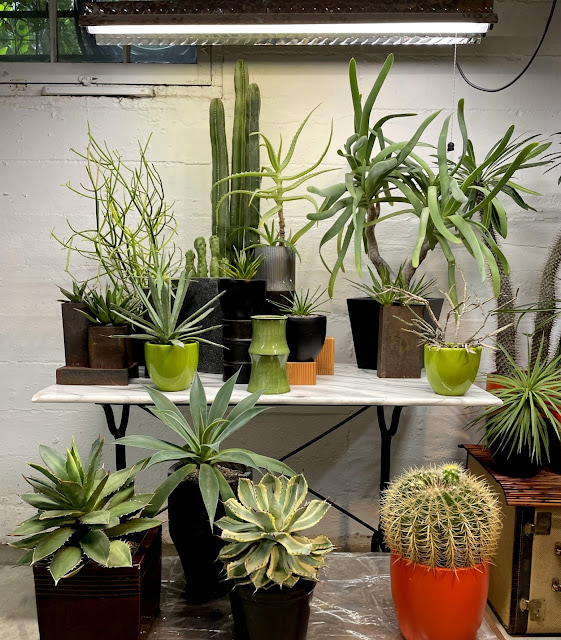 But this is just the beginning. There is so much more to come... 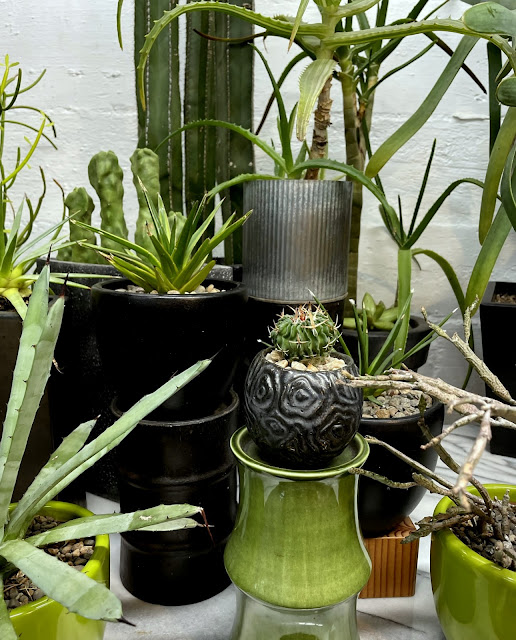 Oh! There's a new plant, well, new to me this summer and the first winter for it here, Eulophia petersii a desert orchid. 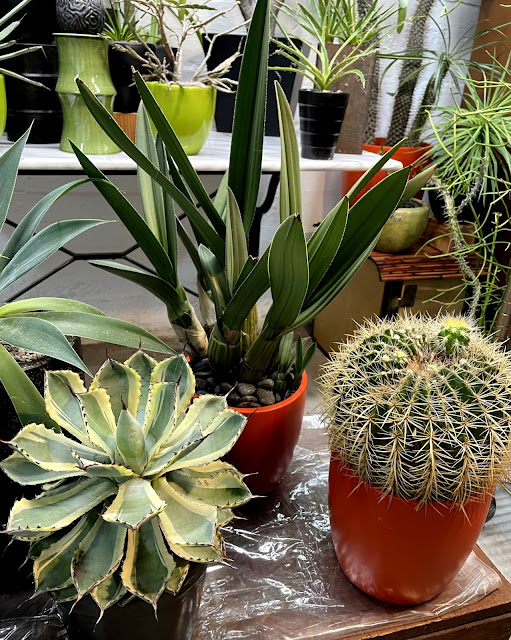 It came to me as a gift from Lance Wright who has left his Portland garden behind and moved to a new home in Eastern Oregon. 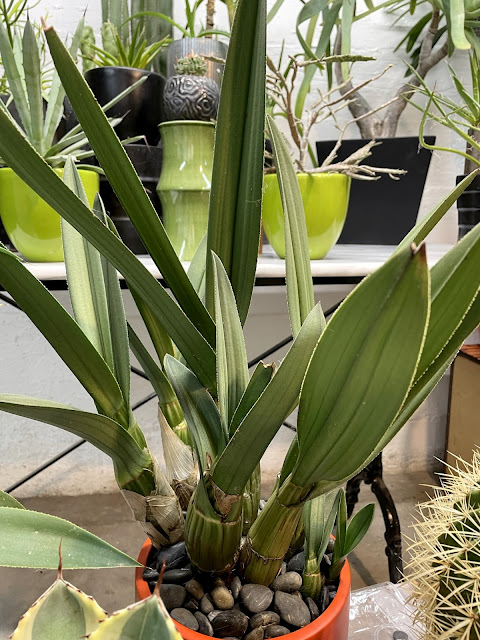 So many small plants, but they're easy to collect and before you know it, you've got dozens. 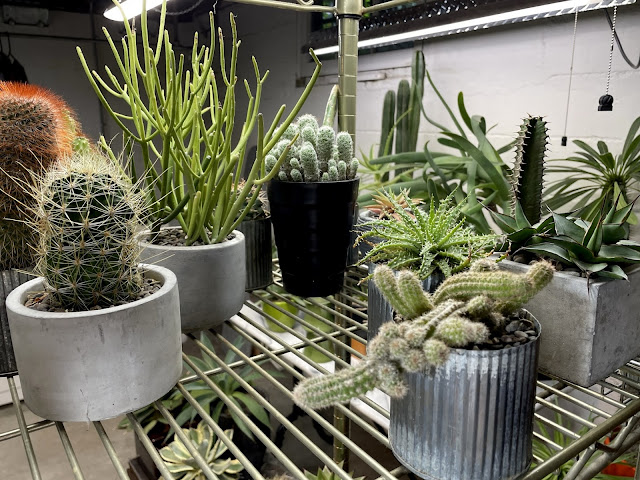 I bought this chunk of Deuterocohnia brevifolia back in 2019 and didn't realize just how much it had grown until I potted it up into this larger container. 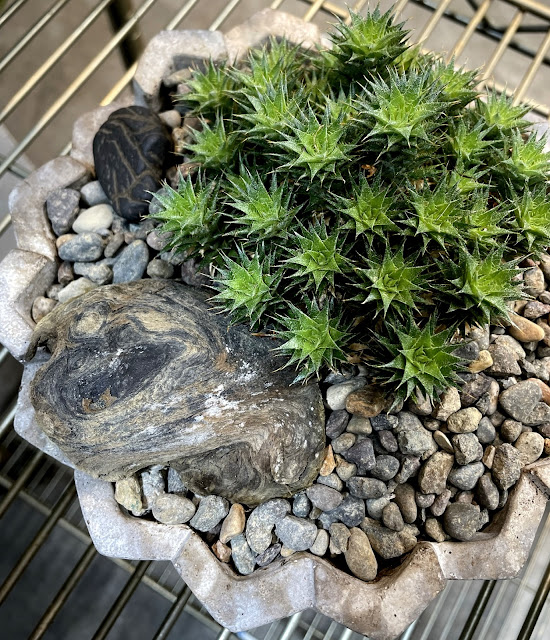 So that's the very first round of this year's migration. Looking ahead I wonder if we're not going to hit a point where things take a very drastic turn—temperatures drop deep and sudden. I hope not, but since I've only got my self to get things ready for the weather change—whenever it decides to show up—I have to keep chipping away at the chores.
—   —   —
All material © 2009-2022 by Loree L Bohl for danger garden. Unauthorized reproduction prohibited and just plain rude.

Labels: Agave, Cactus, containers, inside the house, my garden