The last weekend of June is getting a reputation in these parts, a HOT reputation. June 26-28th 2021 brought the infamous "Heat Dome" and record setting high temperatures for Portland of 108, 112, and116 F. This weekend brought another warm forecast... 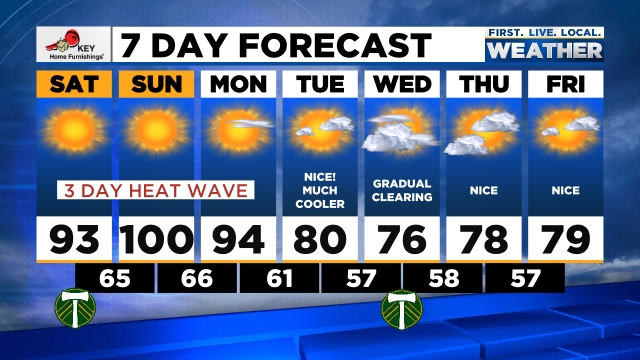 ...with actual temps of  93, 99 and 97. Thankfully this wasn't anywhere near as hot as last year, but still significant for gardeners, as those highs were completely out of line with the cool wet days we've been experiencing. When your plants are used to partly to mostly cloudy days, with highs in the 70's—then hitting 85 by 10:30 am is quite a shock.
On a personal note, I was thankful to be able to walk the garden this year to prep and water with ease. Last year I'd just had ankle surgery and wasn't able to get outside throughout the day and check on things. It was hell wondering how my plants were doing, to not be able to run out and shade something that was showing signs of wilting—like the new growth on this Rhododendron 'Ebony Pearl'. It was so crispy ugly after last year's heat that cut it off. Then wouldn't you know it, this year's fresh new spring growth was still tender when this heatwave hit... 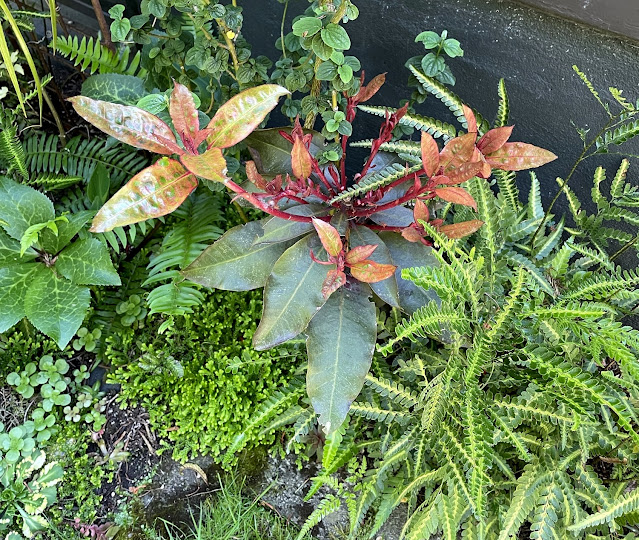 Ditto for the Sinopanax formosana, only it wasn't just new growth that was scorched under three days of relentless hot sun last year, the old foliage turned brown too. It looked so bad I decided to cut the trunk back, way back. Would it respond? Or did I just kill a very expensive plant? It responded, but now I needed to protect those tiny new leaves! 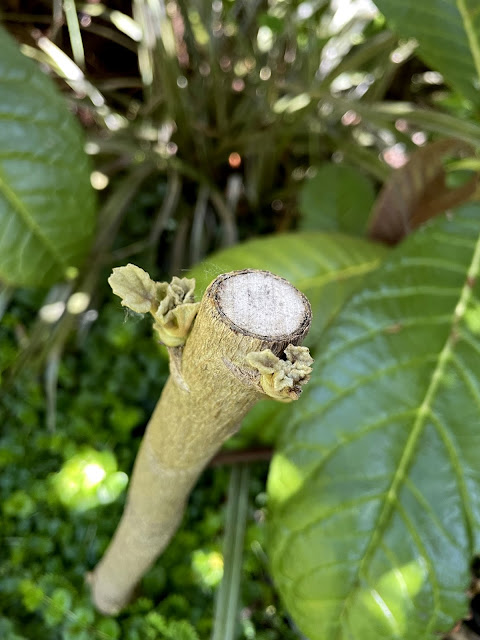 Ditto for the Schefflera delavayi... 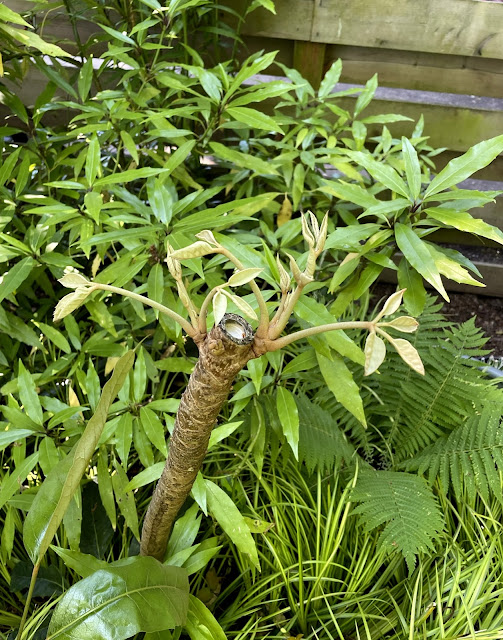 So this is what my garden became... 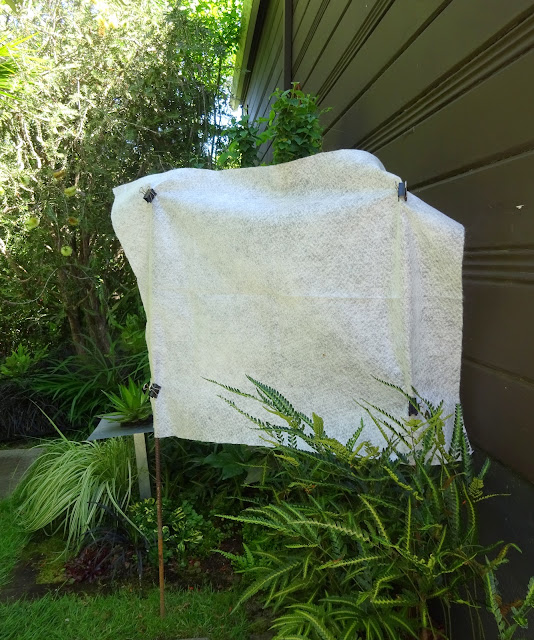 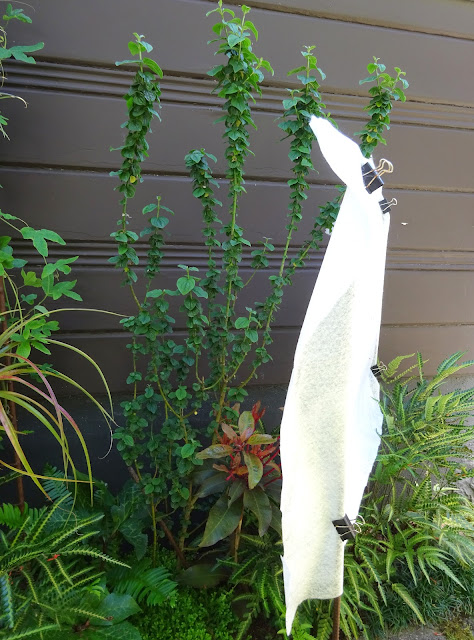 It turns out those big brown new leaves on the Rhododendron sinogrande, are also kinda tender. 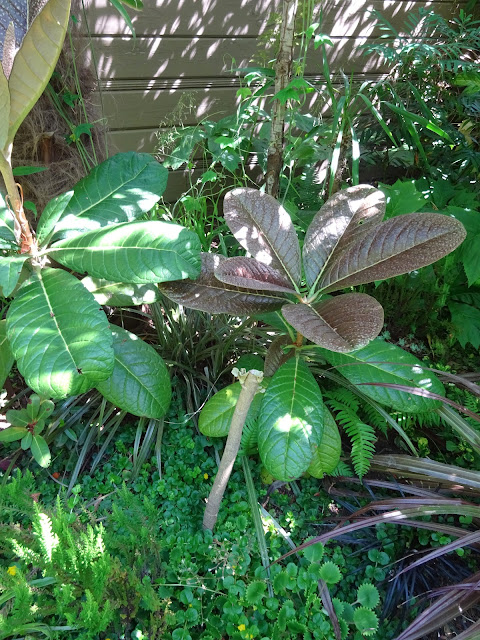 Something I found out as the heat progressed. The shorter one made it behind the cloth, the taller one did not, it's leaves went limp and folded in on themselves. Thankfully a good soaking when the sun went down and they recovered 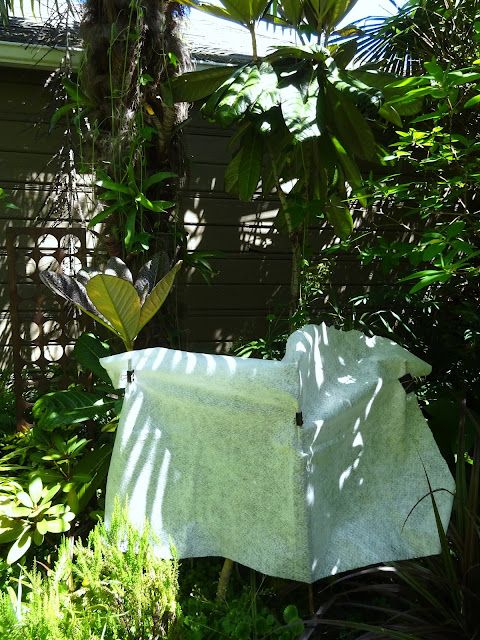 The Schefflera delavayi looks like it's performing some sort of finger-puppet show. 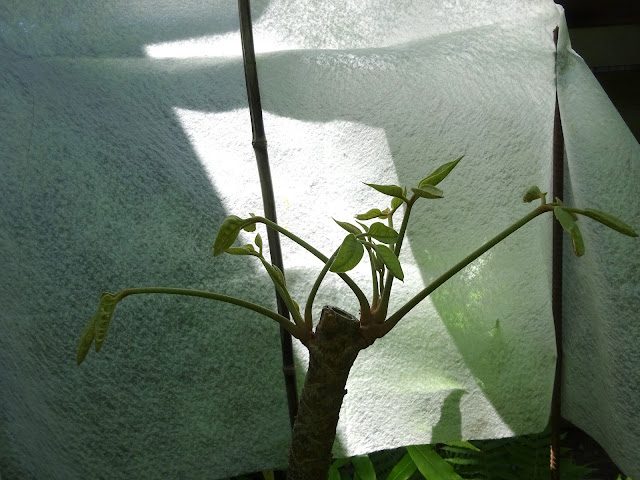 Rather then move the new treasures gathered in this stock tank, I built a shade barrier here as well. 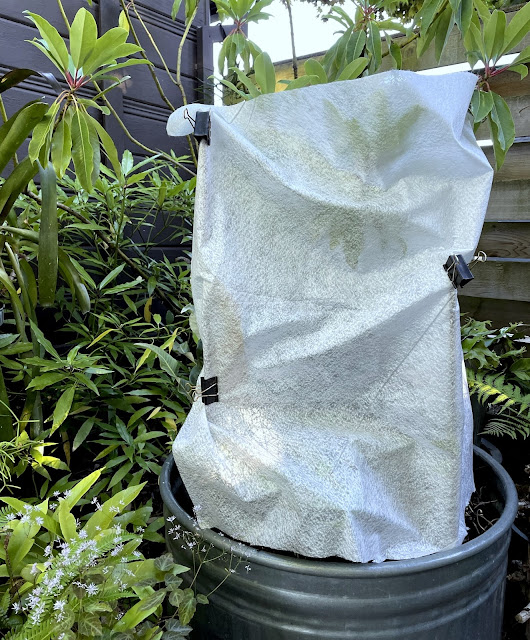 I also took down my garbage can lid planting from the back of the garage. In addition to the heat, strong evening winds kicked up. If the sun didn't crisp these guys up, the wind may have knocked it down. 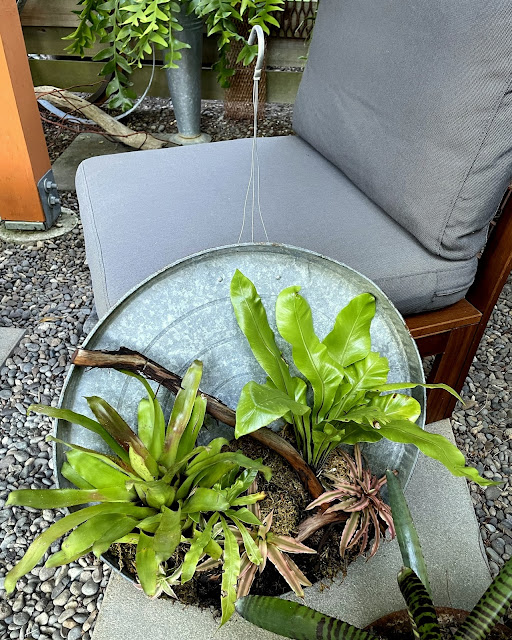 This is one I missed! Augh! The tender new growth on a prized Pyrrosia sheareri. As soon as I caught it, I built another shade wall, fingers crossed it recovers. 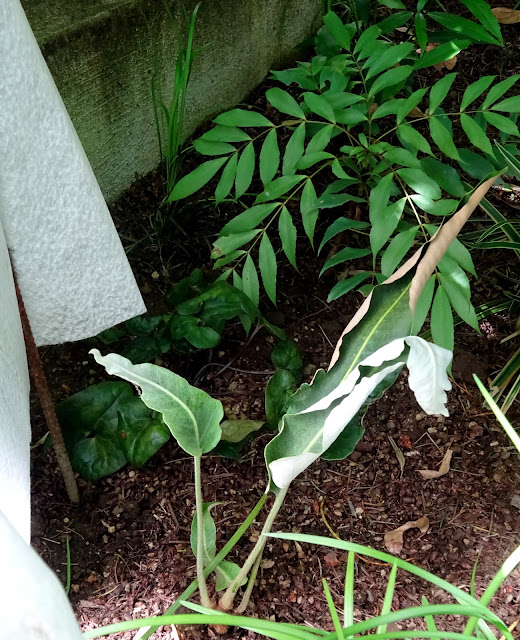 Don't get me wrong, I'm am happy the summer sun has arrived. It just would have been nice for the plants if maybe we'd had a a few days in the high 80's, maybe a day at 90, before BAM! We left the cloudy, cool and rainy days behind and almost hit the century mark. 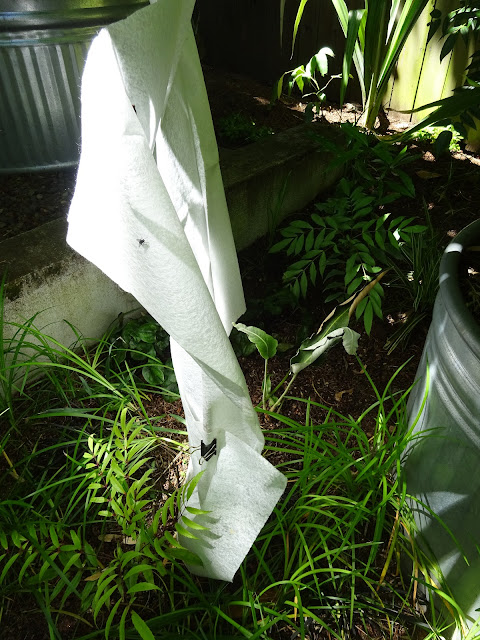 Even the agaves shared their unhappiness, as a few ended up with sunburned leaves. 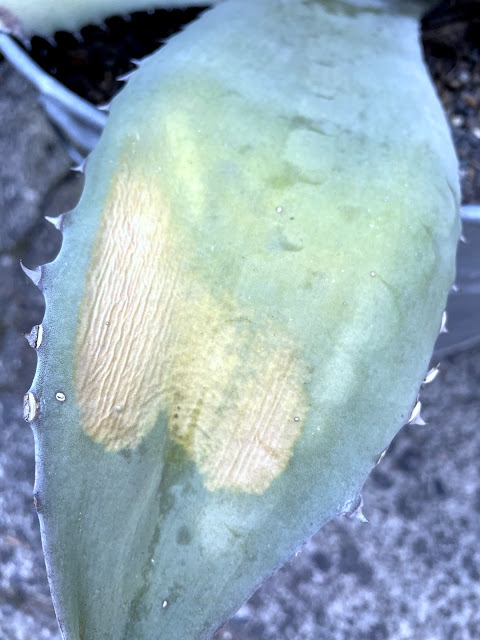