Agaves! Free to a good home...

***update, the agaves went fast—thanks everyone!***
Taking a break from the blog was a good decision, and I'm not going to lie; I entertained the idea of not picking it back up again. I've been doing this blog thing since March of 2009 and have published over 3,390 posts. That's a lot of time spent photographing, editing photos, writing, uploading and then dealing with Google/Blogger's never-ending software nonsense.
Then I received an email asking if I'd help rehome some agave pups, and I got to thinking about the community I've built around this blog. The people I've met and gotten to know. How wonderful you all are, as evidenced by the many heartfelt comments on my last post, about losing my dad.
So here I am, sharing the story of 57 Agave salmiana pups that are available, free to anyone in the Portland area who wants to grow a giant spiky agave. Agave pups Matthew Boyd removed from this beautiful, spiky, giant (just to the right of the large opuntia patch, below) in his NE Portland garden... 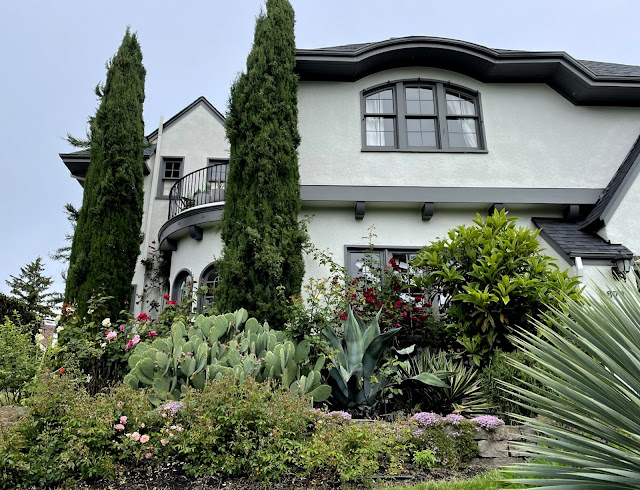 I first "met" Matthew after I shared photos of his blooming Agave ovatifolia (here) back in June of 2021. That agave is still standing, or, well, leaning... 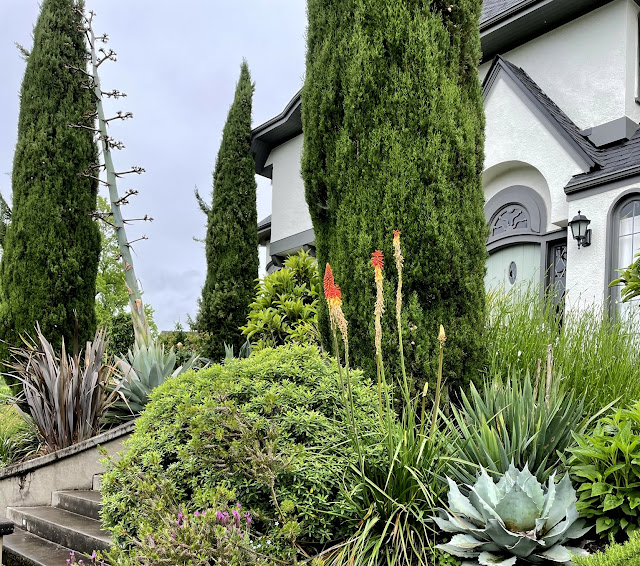 It was fun to walk up and check out the bloomed out agave up-close, a year later. 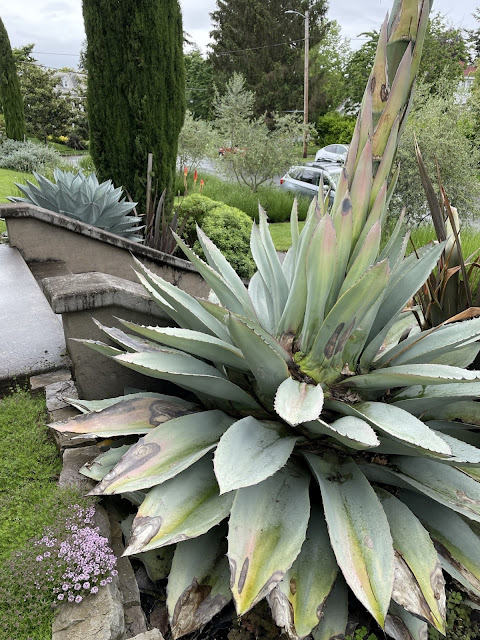 It's counterpart across the steps looks pristine, no signs of blooming here. 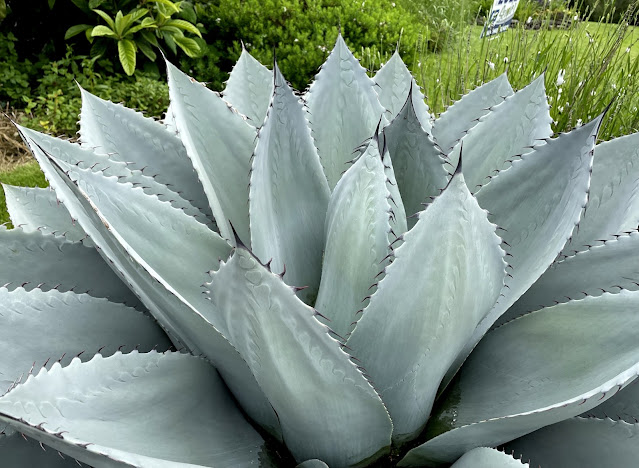 Although there is moss! (I think all of us PNW agave growers have experienced moss in our agaves at some point). 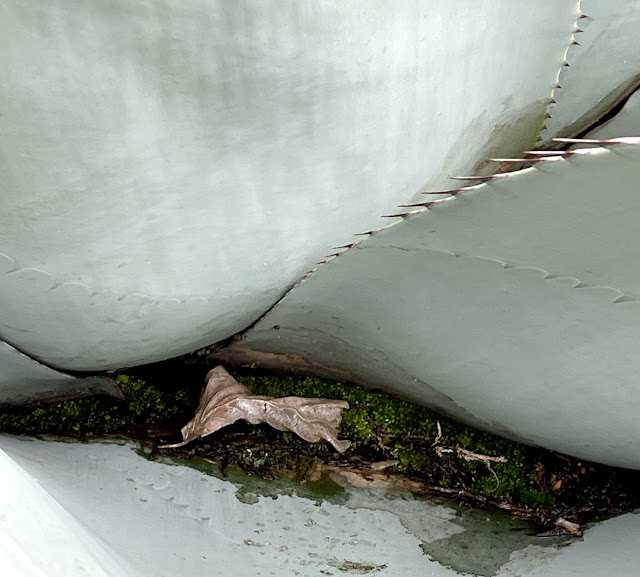 So back to the prolific spiky giant. It's hard to tell just how big it is, in this photo. 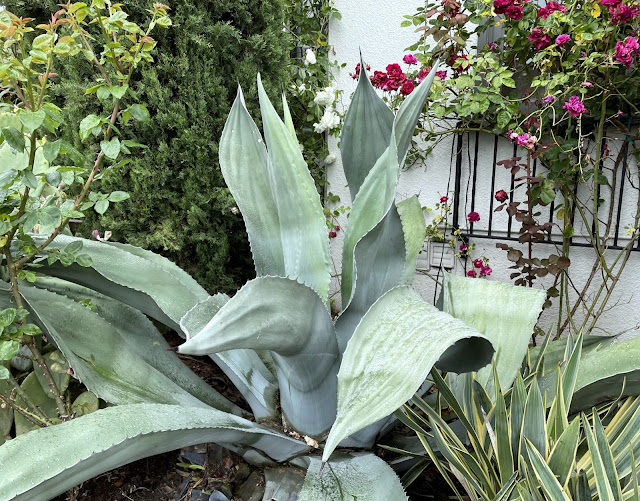 Here's another shot with my hand, for scale. 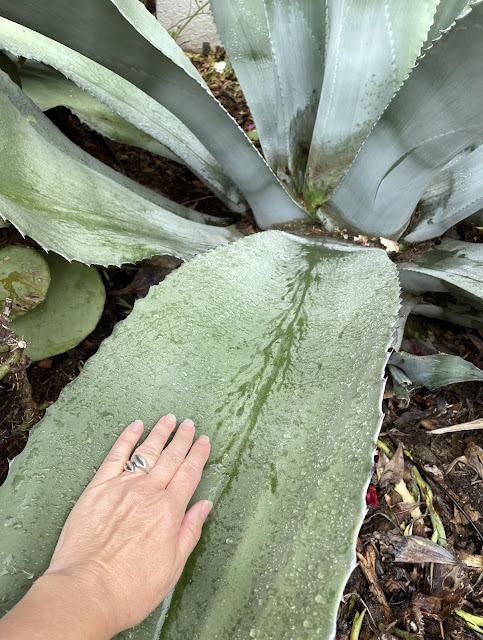 Back when Matthew and I first exchanged emails he shared that this agave was already planted when he and his wife bought the house. It's resemblance to the large agaves growing just a few blocks away (here) and the fact they too send out a lot of pups had me wondering if perhaps they weren't related—a neighbor walks by and admires, a gardener shares, you know how it goes.
Anyway, do you live in the Portland area? Do you love agaves? Do you have room for a large agave? Well then Matthew's got a pup for you! Many of them are small, but keep them in a pot and put them in your sunniest (we will get sun, eventually), hottest, spot and water them over the summer. 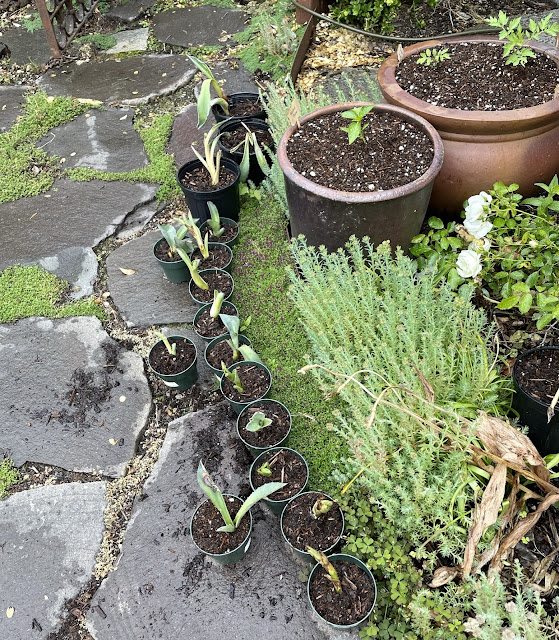 Keep them dry over the winter, and—although it's hardy once planted out in the ground—you should probably protect it if we get a cold snap next winter and it's still in a pot. 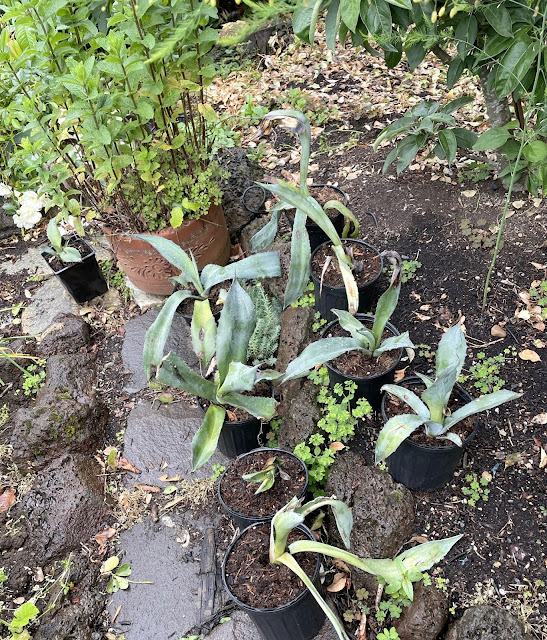 Then once it gets to a good size—filling the pot it's in—plant it out in a sunny well drained location late next spring. 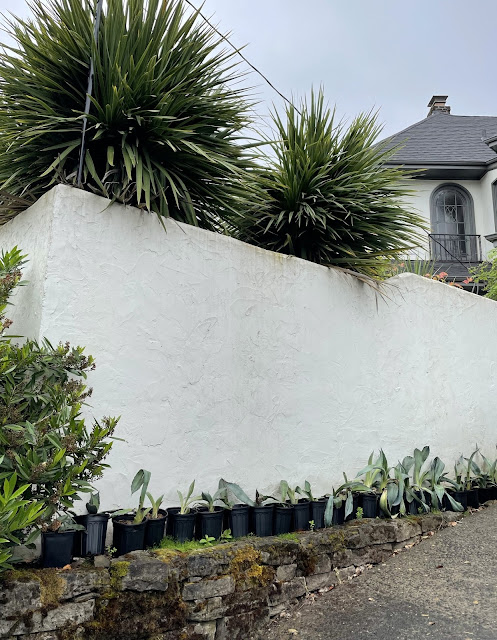 Matthew has moved these pups (along with a few opuntia and veggie starts) to his front steps at 2871 NE Alameda St, Portland, OR 97212. He'll leave them there through the weekend, stop by and grab one or two! And thanks Matthew, for allowing me to help spread the agave love... 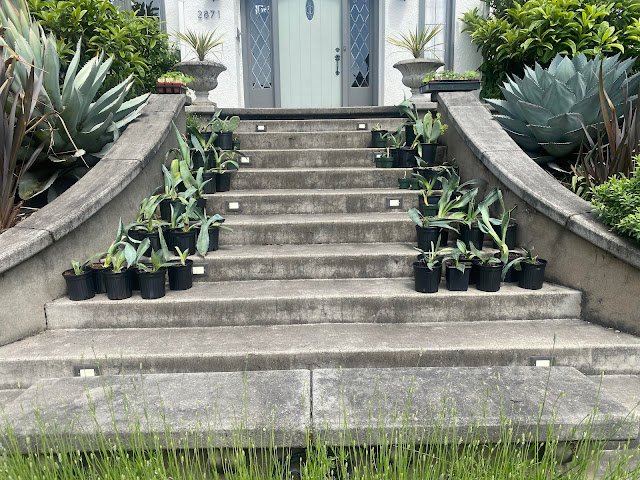