Plants on mini-mountains, at the John Fairey Garden

We're back at the John Fairey Garden for one more post, this one about an interesting planting style I saw at the garden. I'm referring to the mini-mountains, seen here first, next to the parking lot. 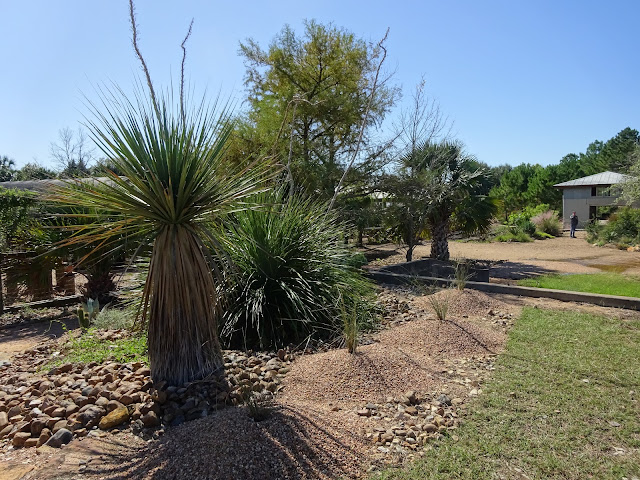 I remember thinking those mini-mountains (cones, volcanos, ant-hills) were odd. But I was also a little overwhelmed at the idea of touring the garden, so we moved on and I quickly forgot them.
But there were more, like this agave planted high in the dry garden (high and dry!)... 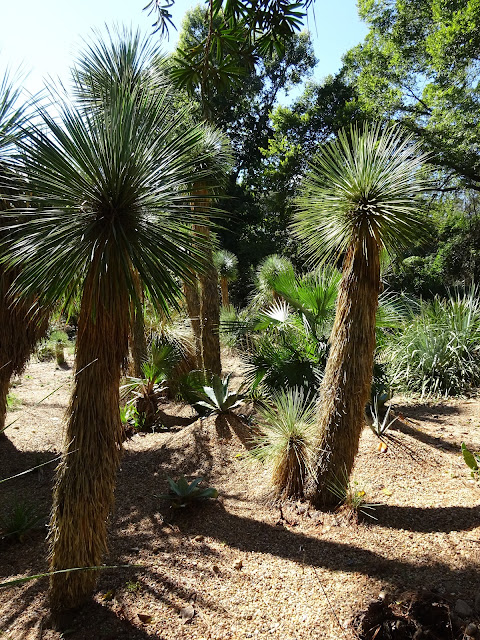 To be honest it wasn't even until I started going through my photos, editing them for the blog, that the sheer number and size of the "volcanoes" became something I could no longer ignore. 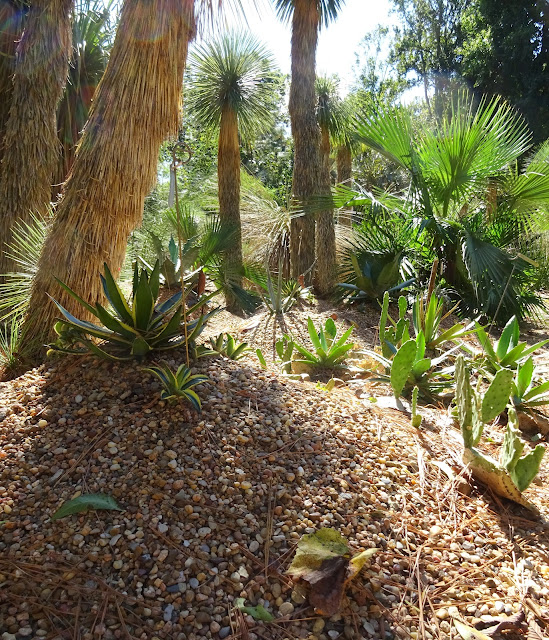 So I emailed the garden, asking; "There are many plants, from agaves, to dasylirion, to conifers and some other trees, that are planted on small hills, or volcano shapes, why is this? I thought of drainage for the agaves, but then when I noticed it repeated throughout the garden I figured that couldn't be it—or is it? Can you please explain?"
The next day I had an answer: "There are a couple of reasons that John [Fairey] raised plants when planting the woody lilies. As you assumed, one was to create good drainage; he also considered these mini-berms as pedestals, raising and isolating the plants to enhance their sculptural qualities. For other plants, like trees, he apparently believed it allowed the roots to get a better start than planting them straight into the ground."—Randy Twaddle, Executive Director, The John Fairey Garden 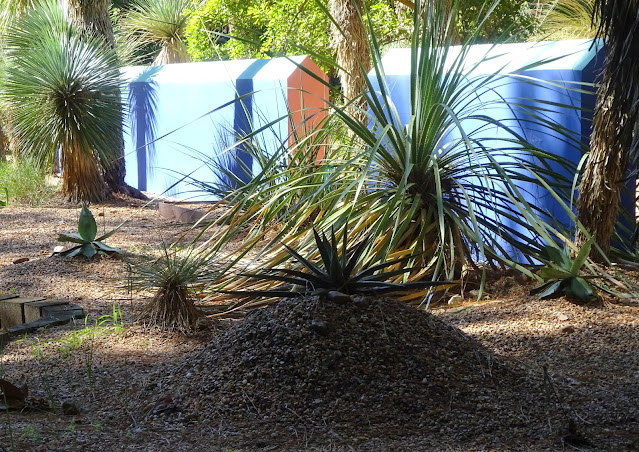 Later, emailing with Pam, she shared a link to a story she wrote on John and his garden: The Plant Man, by Pam Penick for Garden Design. Here's an excerpt: "Compensating for gully-washer summer thunderstorms and winter rains, Fairey elevates each plant for drainage on its own gravel hillock, “because I like mountains,” he laughs, a reference to his passion for exploring Mexico’s northeastern range. But Austin landscape architect James David sees the artist’s eye at work. “Individual plants are put on gravel pedestals for you to admire,” he says, “like buckets of hyacinths on display in a flower shop.” " 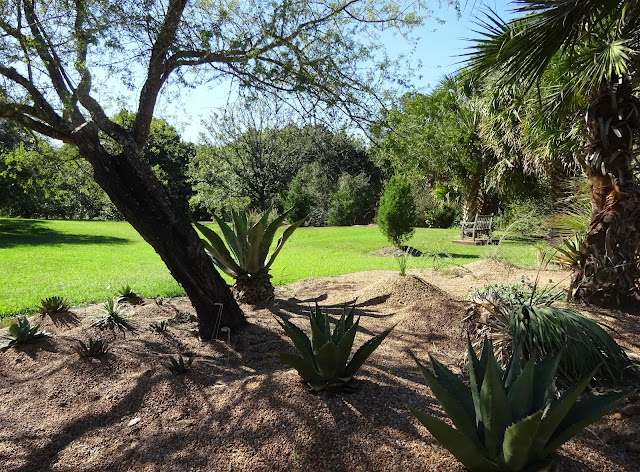 I wish this photo of a pine-needle covered hillock was brighter, the shadows that day were rather intense. 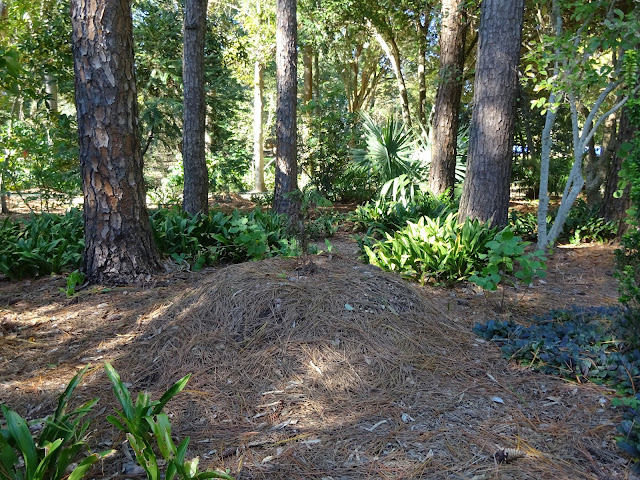 I think you can make out though, that this plant isn't responding well to the treatment, perhaps it just got too dry? 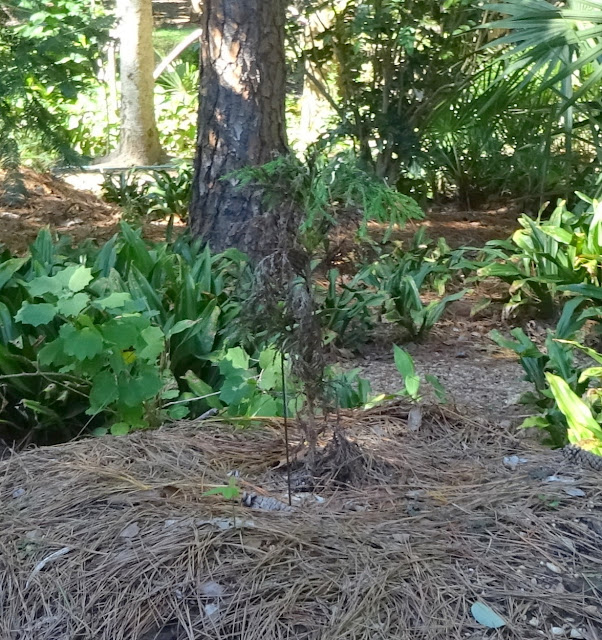 Others didn't seem to mind though... 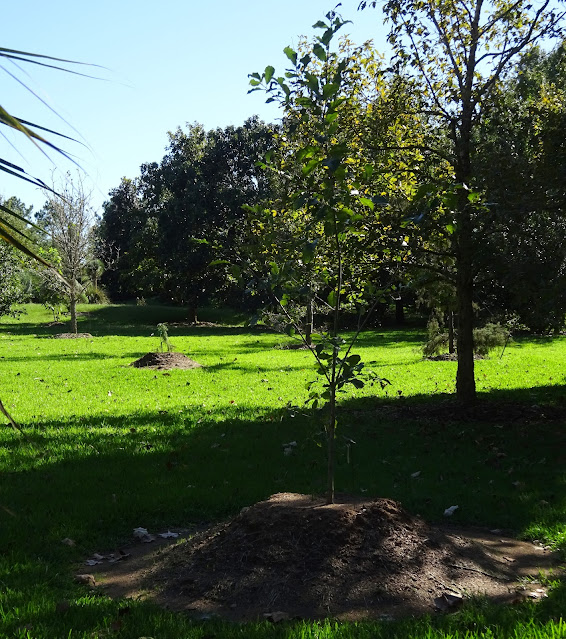 Looking at this last image I am fighting an urge to scream, "no!" as the planting style is reminiscent of the mulch volcanos we sometimes see around trees here in the PNW. 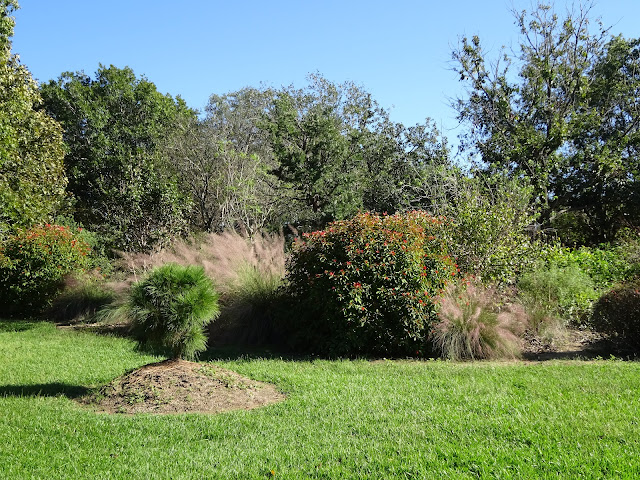 A mulch volcano is when a tree is planted properly—that is with it's root flare, or root collar (the spot at the base of a tree where the trunk transitions from trunk and bark tissues into root system tissues) at the same level as the surrounding ground, or slightly above it—but then the gardener builds up a volcano of mulch around the base of the tree, burying the root flare under inches of mulch. By doing so moisture is trapped around the base of the tree which can damage the bark, and even worse roots are encouraged to grow out into the mulch above the root flare which can girdle the trunk.
The moral of the story? It's fine to plant on volcanoes... but not in volcanoes...
—   —   —
All material © 2009-2022 by Loree Bohl for danger garden. Unauthorized reproduction prohibited and just plain rude.