Look up there, in the sky! (at Lotusland)

During our first visit to Lotusland (2009) we somehow skirted the border of Agave franzosinii and A. americana at the Blue Garden entrance. I'd made a mental note to pay more attention this time. Here they are seen from behind, as we left the Bromeliad Garden... 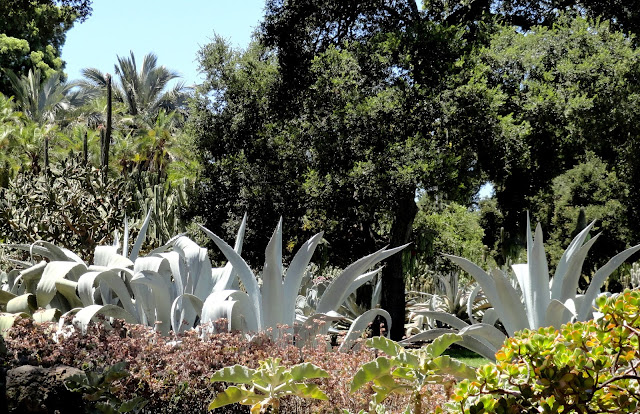 Not that I could have ignored those towering bloom spikes! OMG! 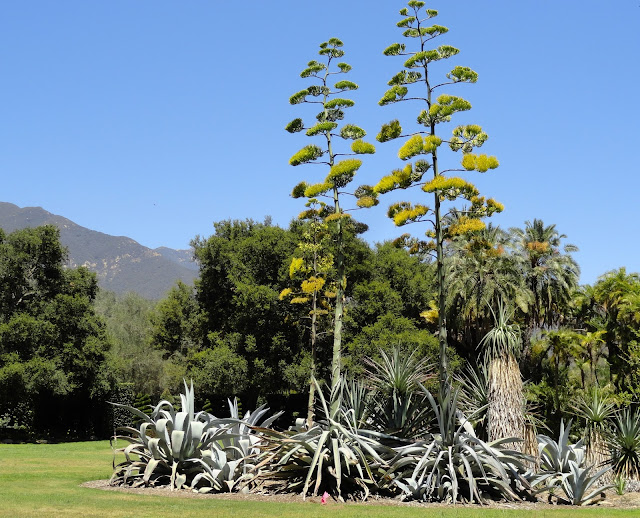 Just how tall are they? Well that there hunk-o-husband is 6ft 2in tall. 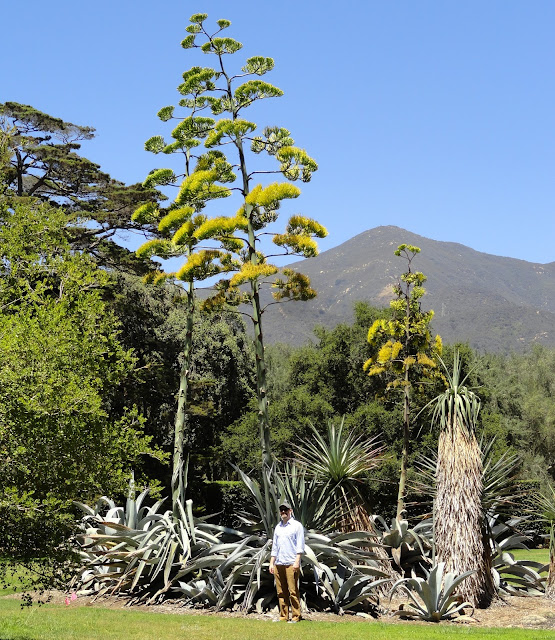 The plants themselves are car-sized. 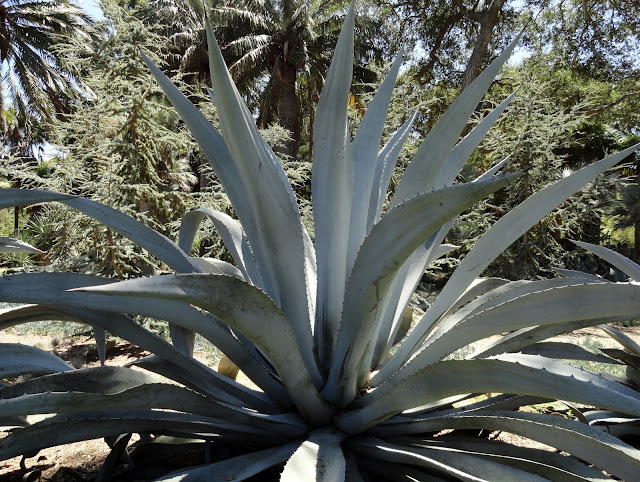 But add in the blooms and they become sky-scrapers.. 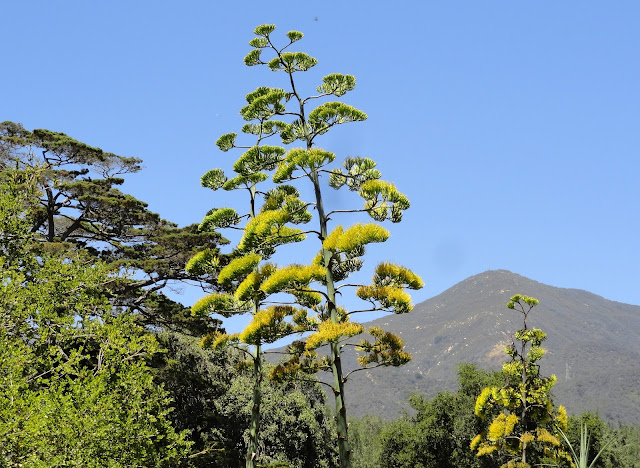 I guess this is why my in-laws wanted to make sure no more Agaves bloomed and died on their property. This would be like a tree falling on your house! 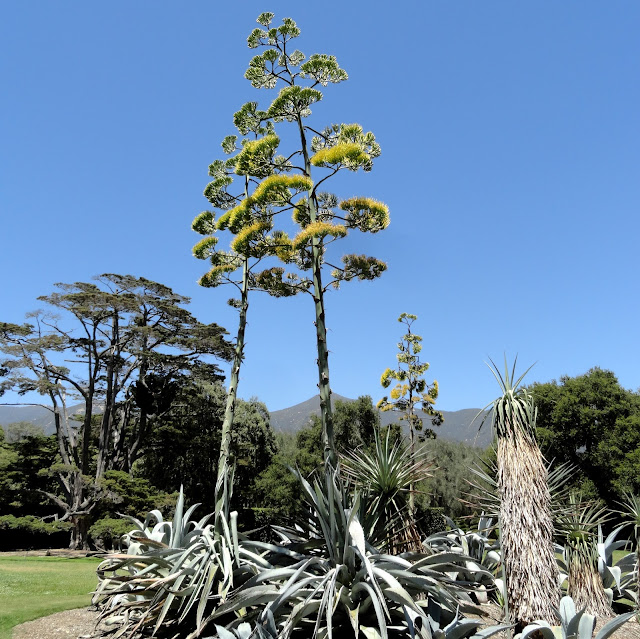 Here's one of the blooming plants starting to shrivel and lose it's lease on life. 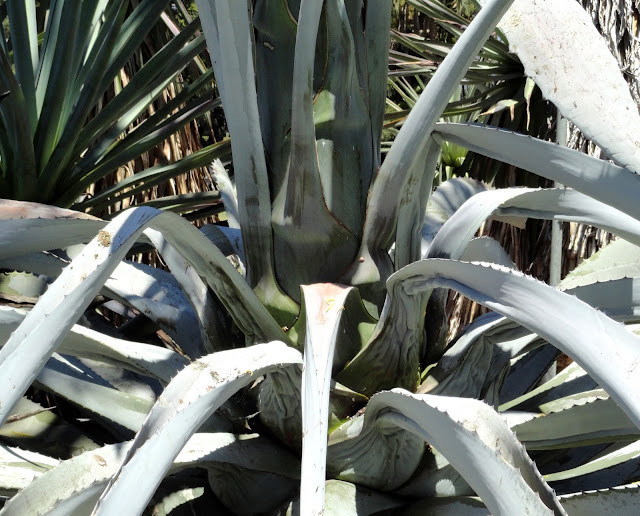 We were amazed at the hummingbirds. They were in heaven, darting here and there. Dozens! Here I managed to capture two of them at work. 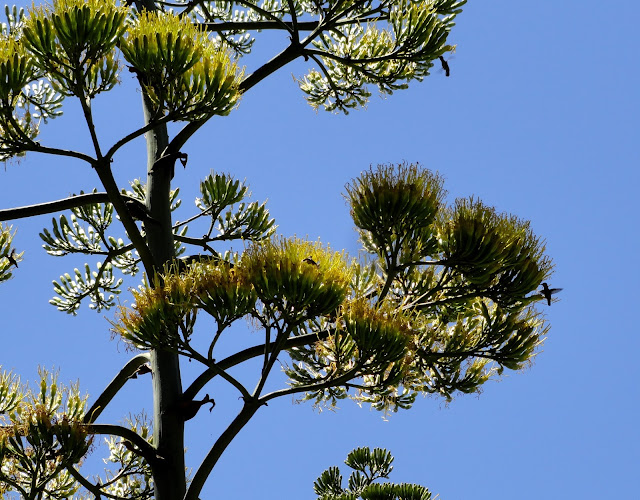 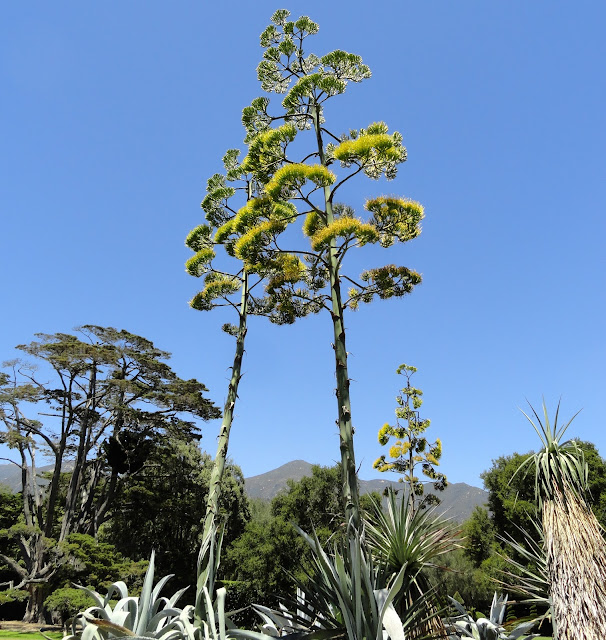 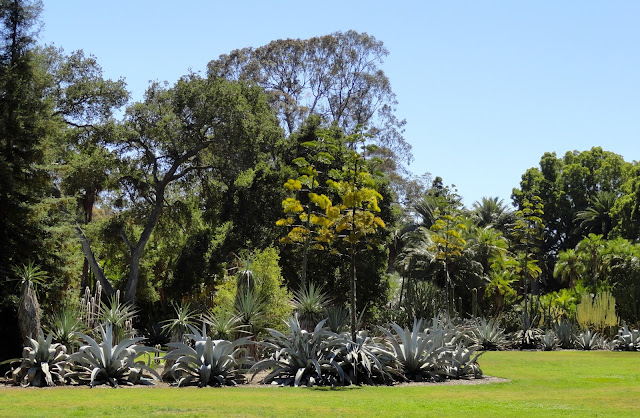 And north-ish, towards the house. 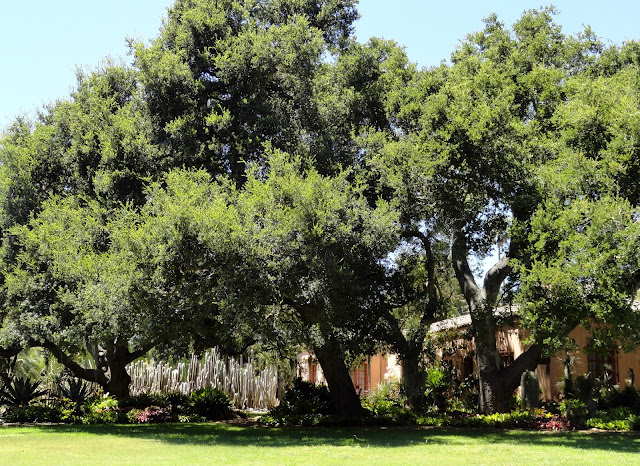 The Agave blooms weren't the only thing up in the sky, these odd hanging planters were also worth looking up to see. 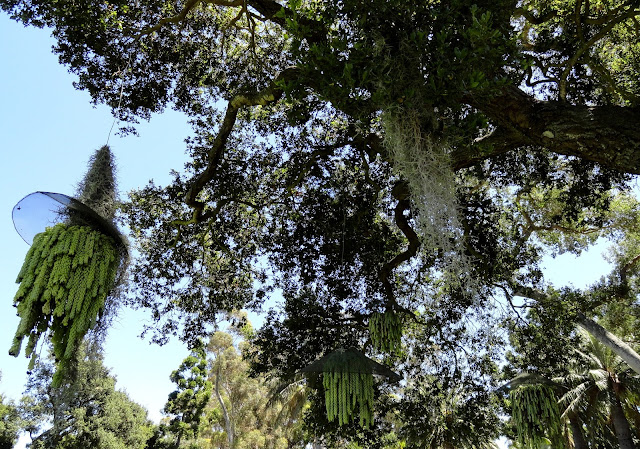 Sedum morganianum topped with a protective cone (protection against birds? squirrels?) and a dash of Tillandsia usneoides... 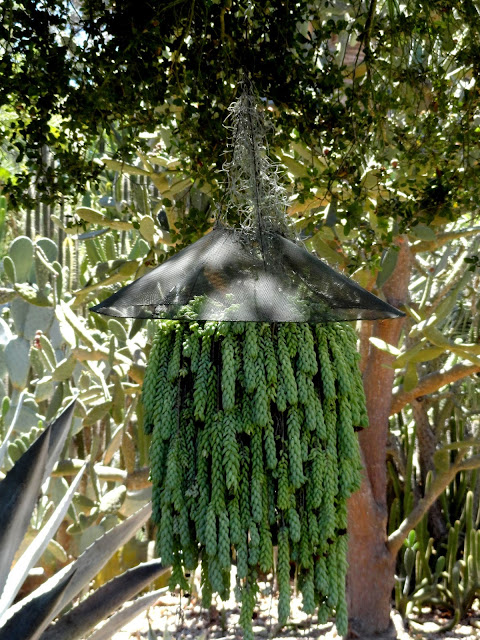 There's no denying they're a little odd. 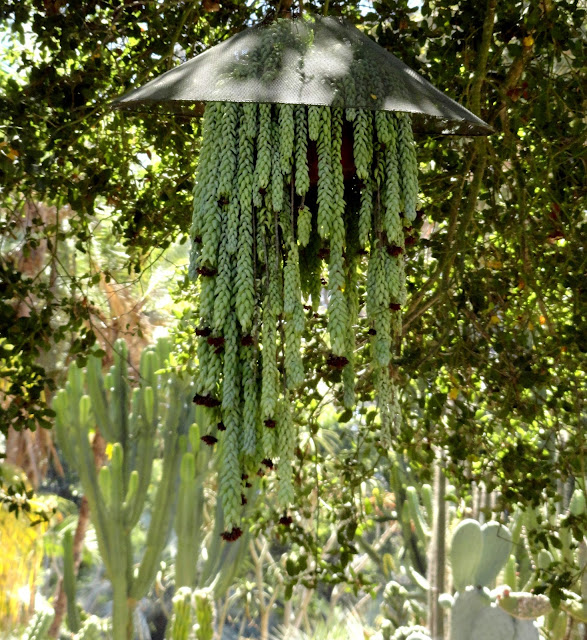 And a lot fabulous. 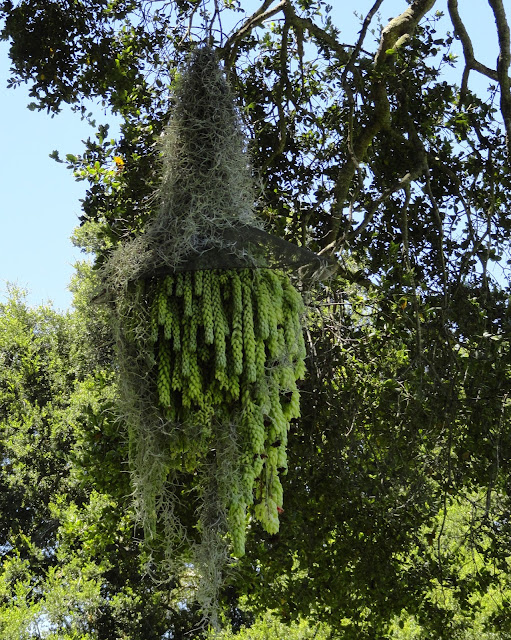 Of course they were also a bit of the inspiration behind my Bromeliad Dish... 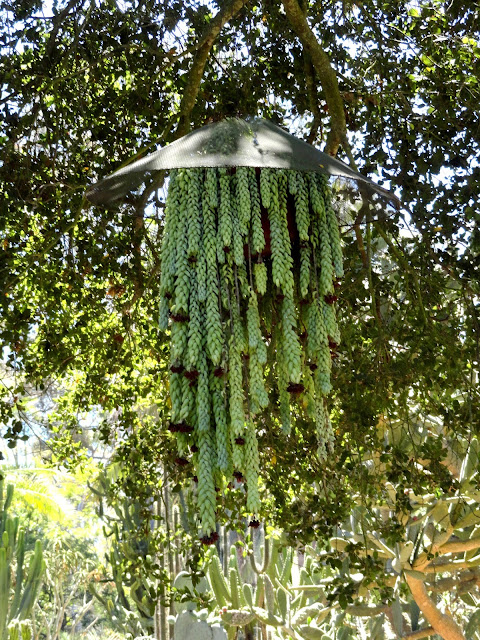 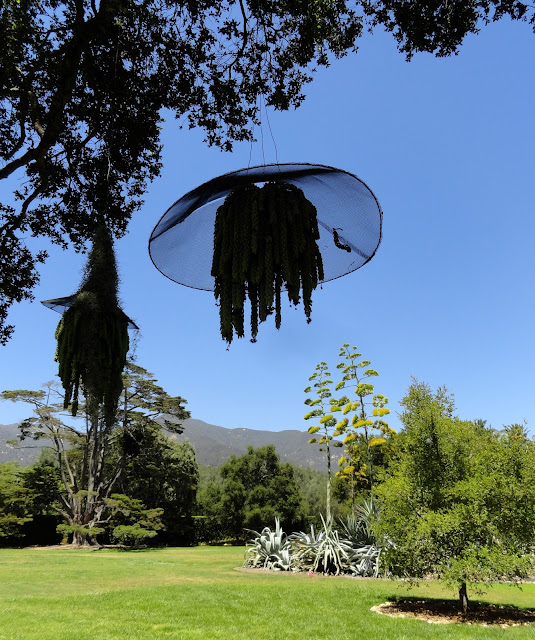 Time to move on, there is so much more to explore... 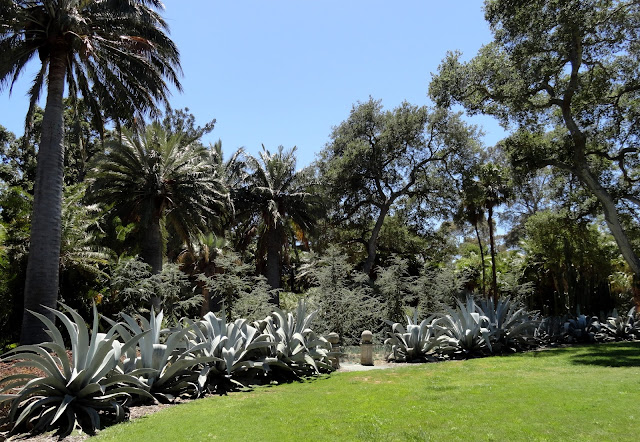 Here you can make out the shapes of the Blue Atlas Cedar, just beyond the Agaves. They play a significant role in the renovation of the Blue Garden but for some reason I didn't snap a single photo. 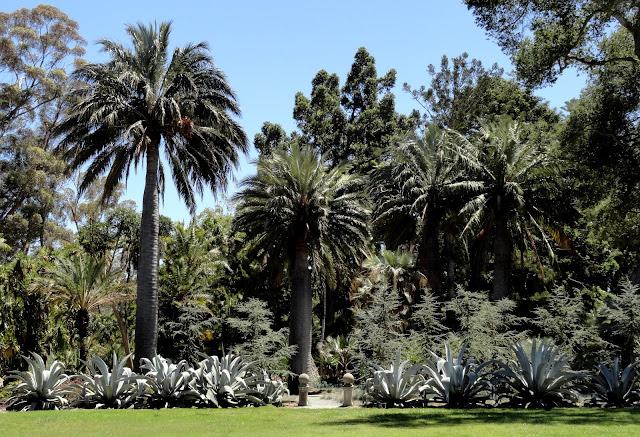 Must have been blinded by the Agaves... 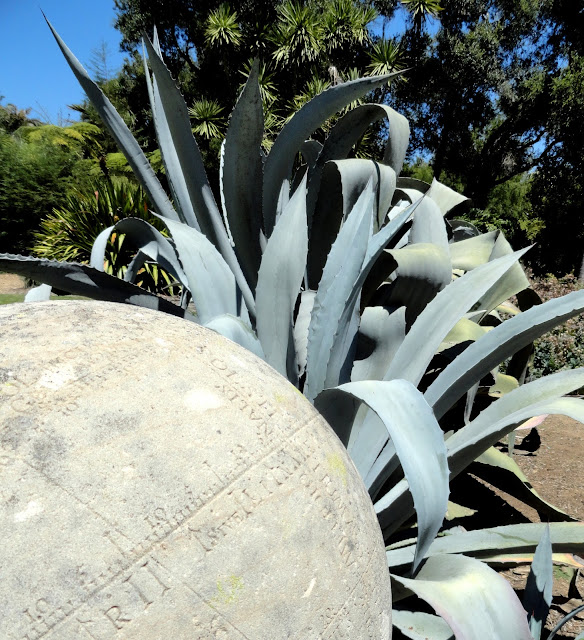