Learn from my mistakes, the pruning edition

A couple weeks back, on the plant lust blog, I wrote about how much I'm enjoying pruning, almost as much as planting. Shortly after that I was "talking" with a blog acquaintance about pruning trees, now keep in mind I'm not claiming to be a pruning expert, I'm not! I was however trying to explain the concept of a branch collar, and how pruning just a bit beyond that point allows the tree to heal itself. I figure a picture is worth a thousand words, right? 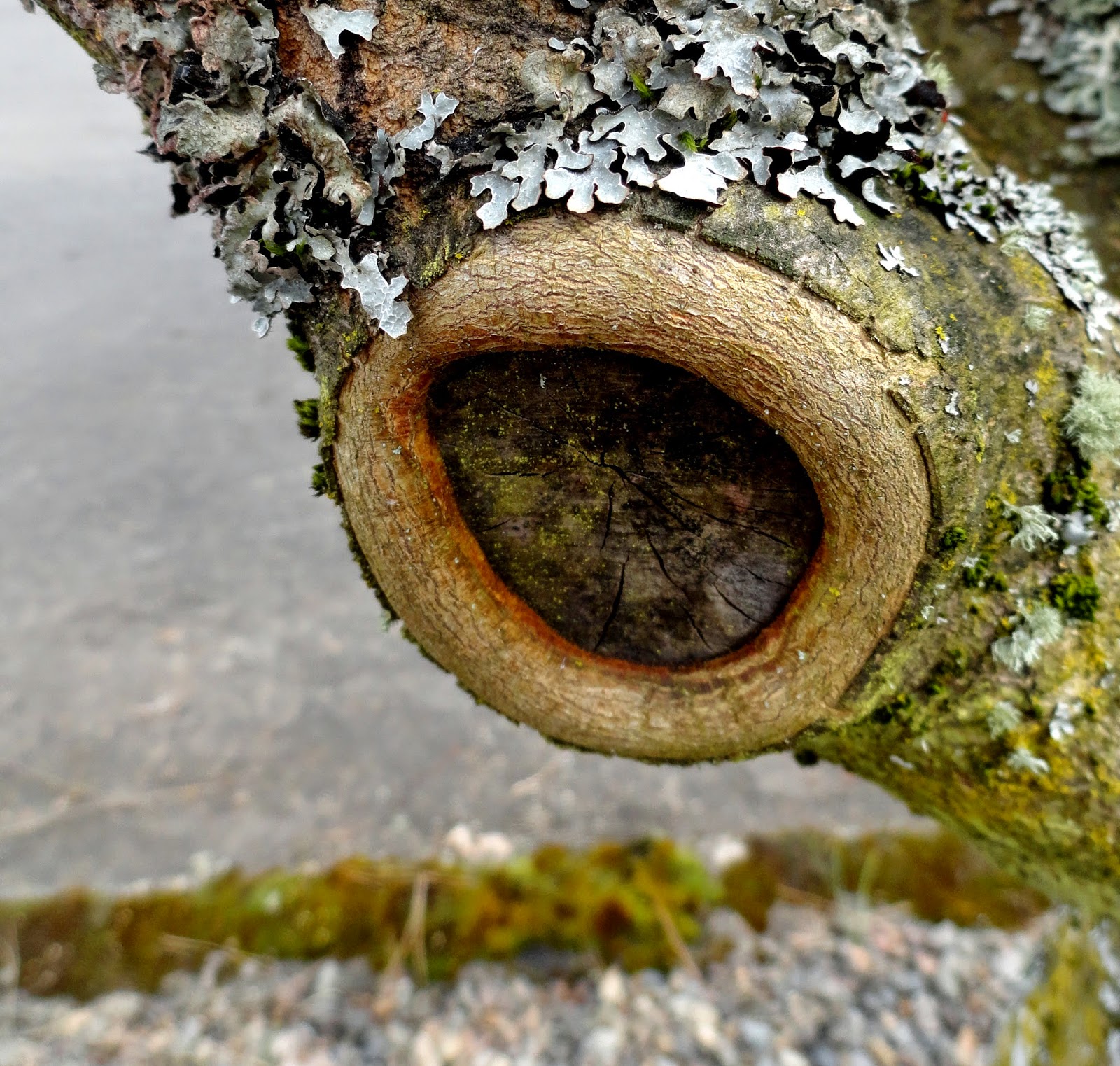 That cut, above, was done in early spring 2013, the tree is growing out around the cut. Below is a cut we did a few years earlier, the tree has (almost) completely callused over the cut. 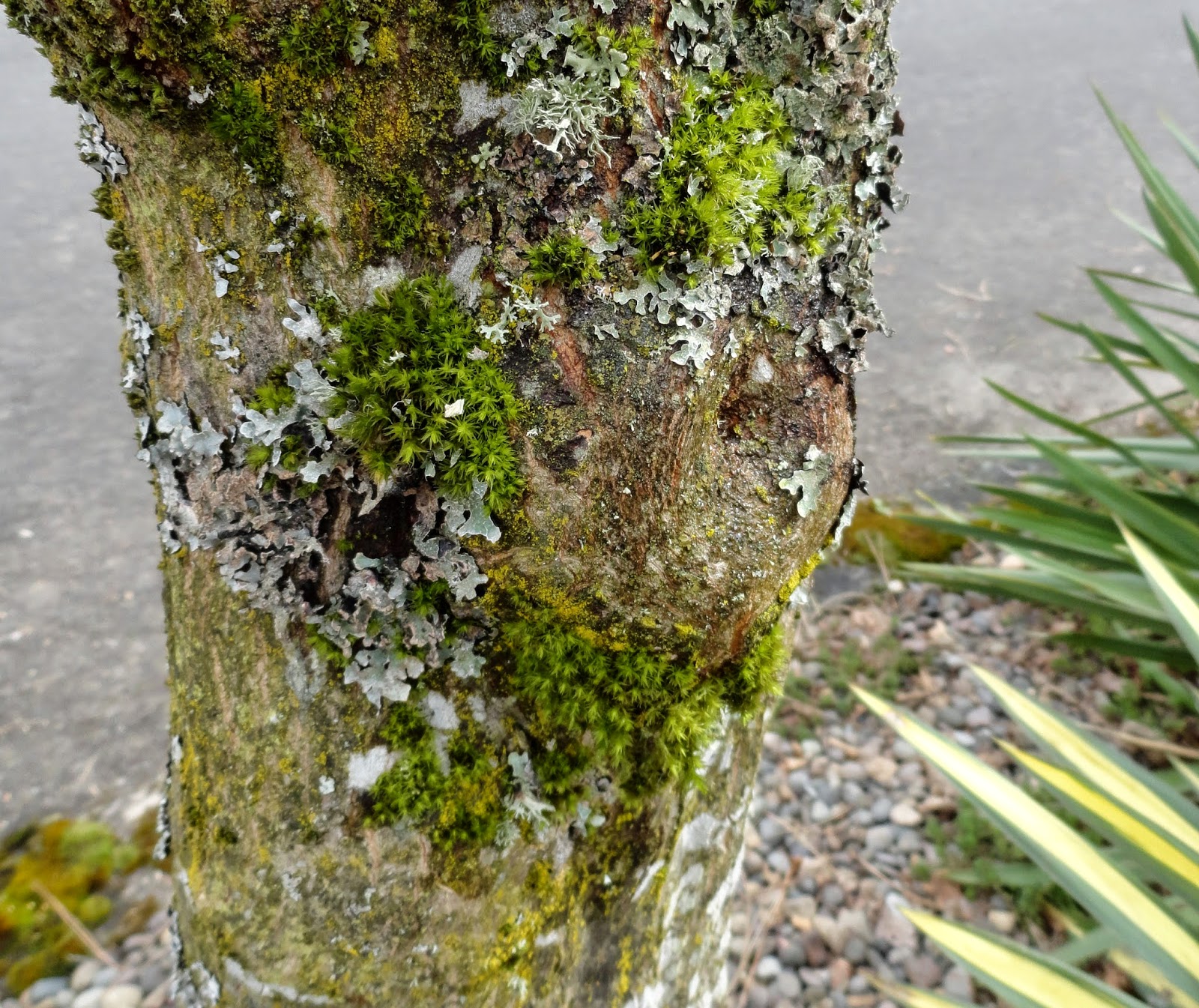 Oh and I figure if this pruning talk is of no interest to you at least maybe you can appreciate the amazing moss and lichen growing on the tree? It's pretty fabulous. 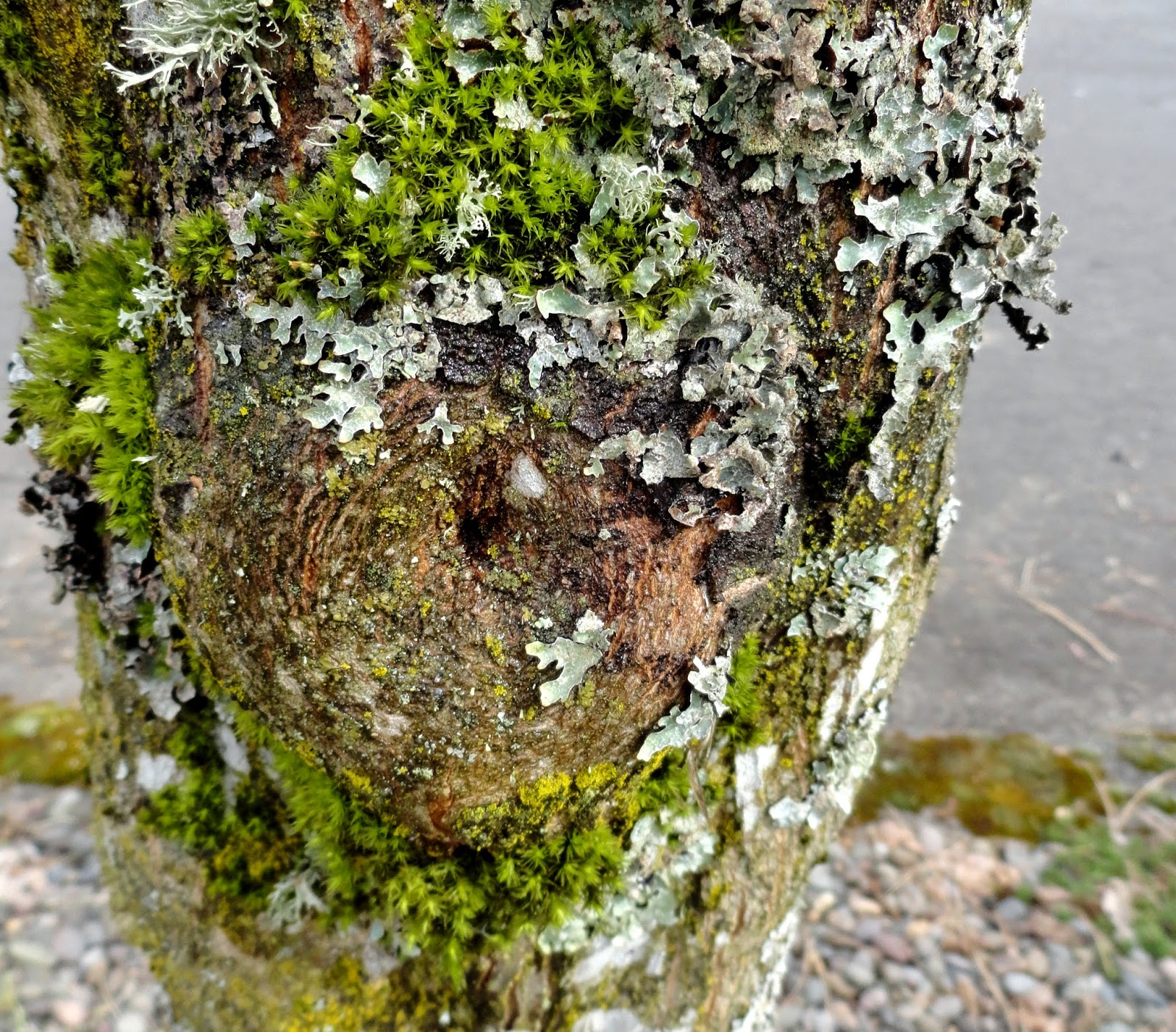 These examples are all on our Styrax japonica, growing in the hellstrip, we inherited a pair. 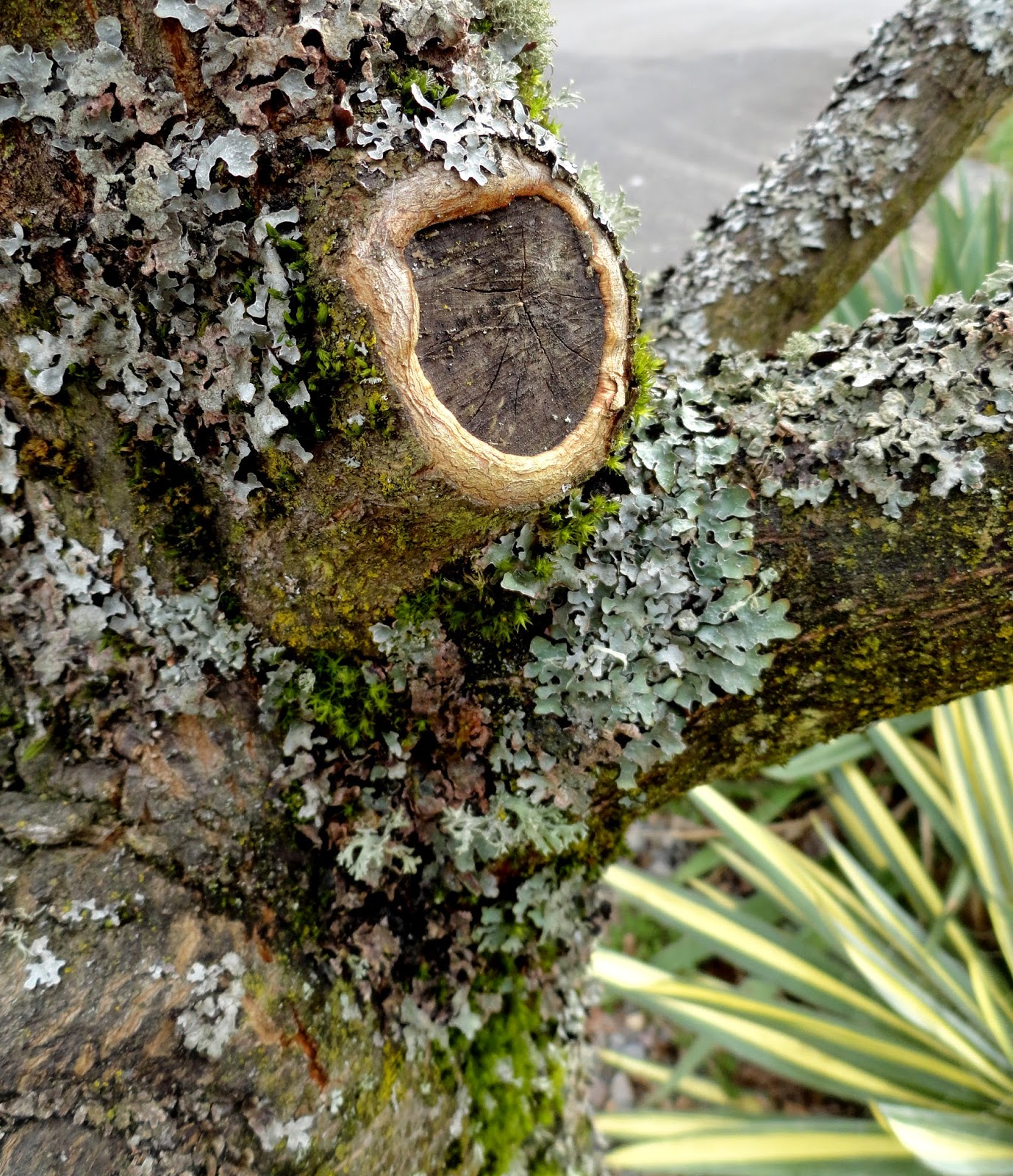 This is where you learn from my (our) mistakes. Look at that healing (or not) cut. 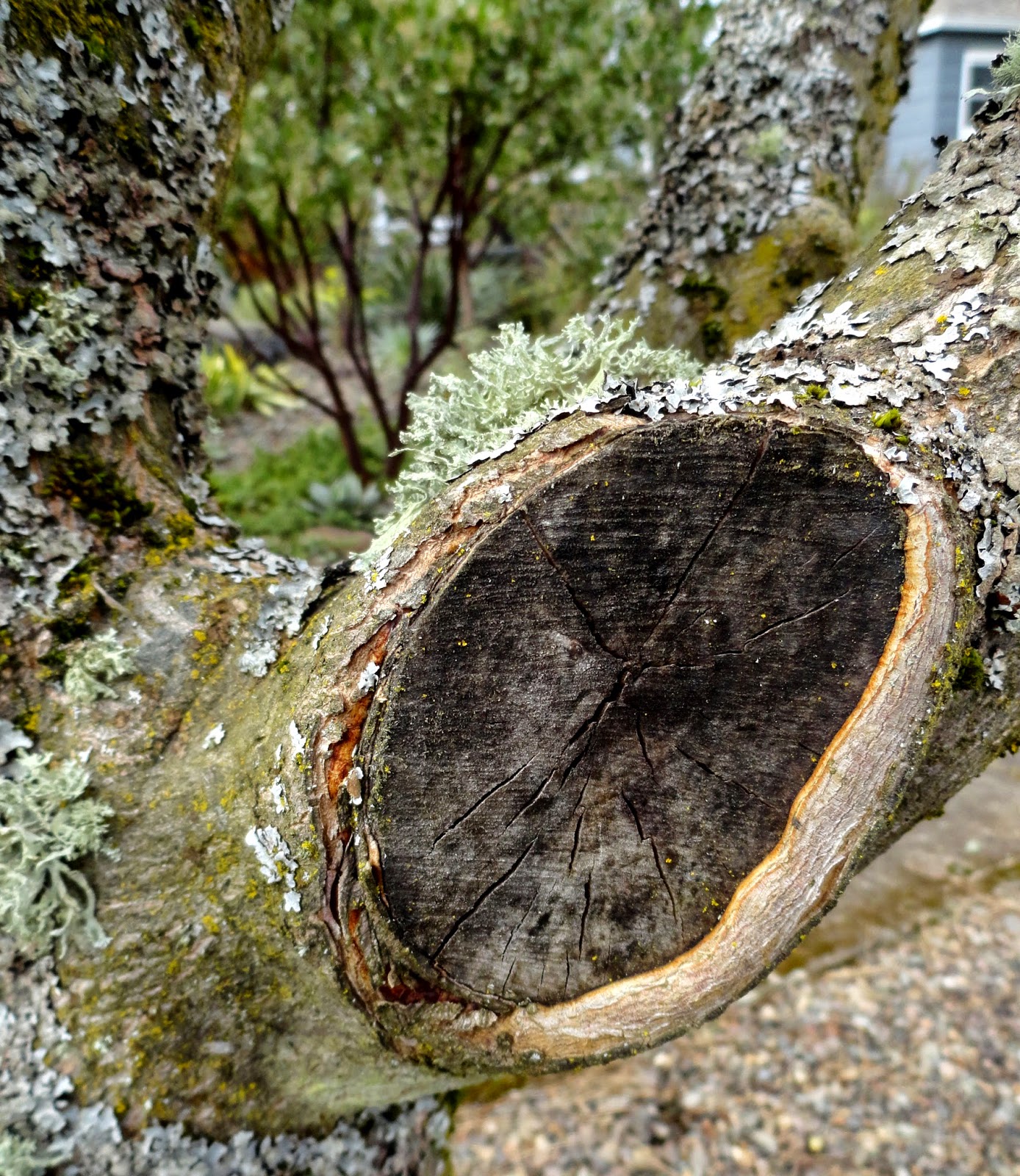 Looks like we cut too far back, destroying the collar, doesn't it? This was a tricky branch, coming off another branch at an odd place to cut. 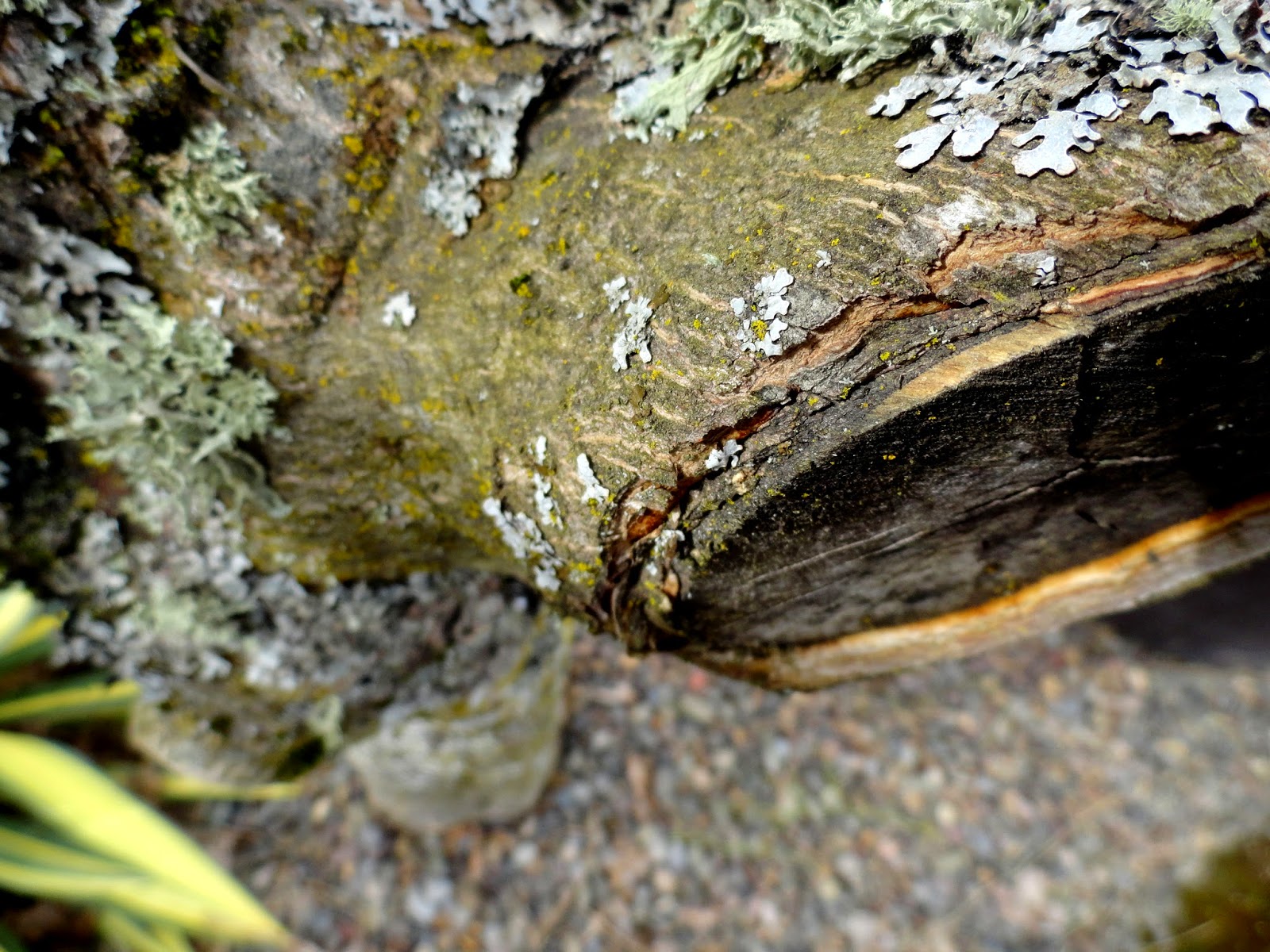 It looks like a callus is trying to form but having no success. Maybe this isn't a "learn from my mistakes," but really a "tell me about my mistakes?" What do you think went wrong? 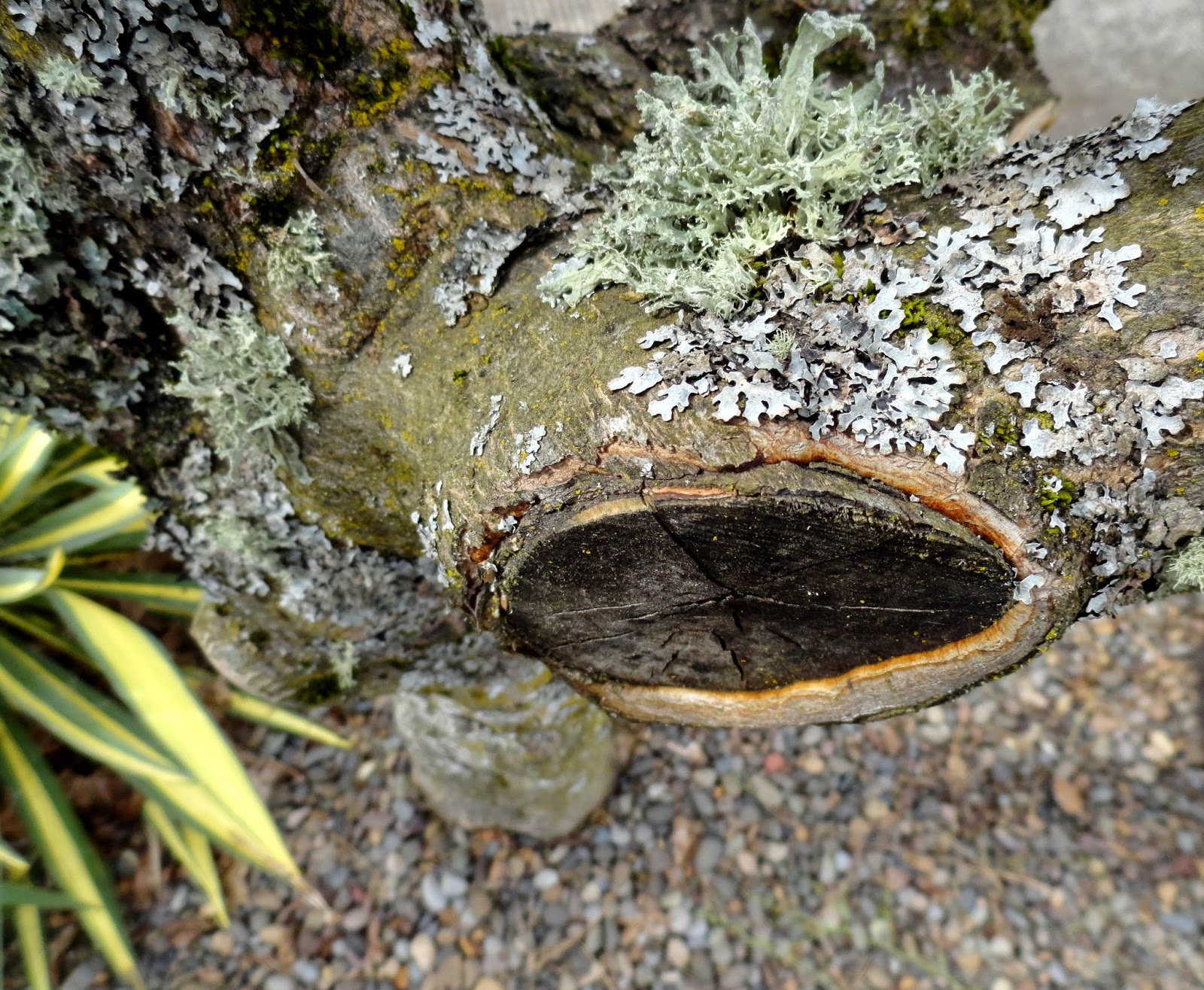 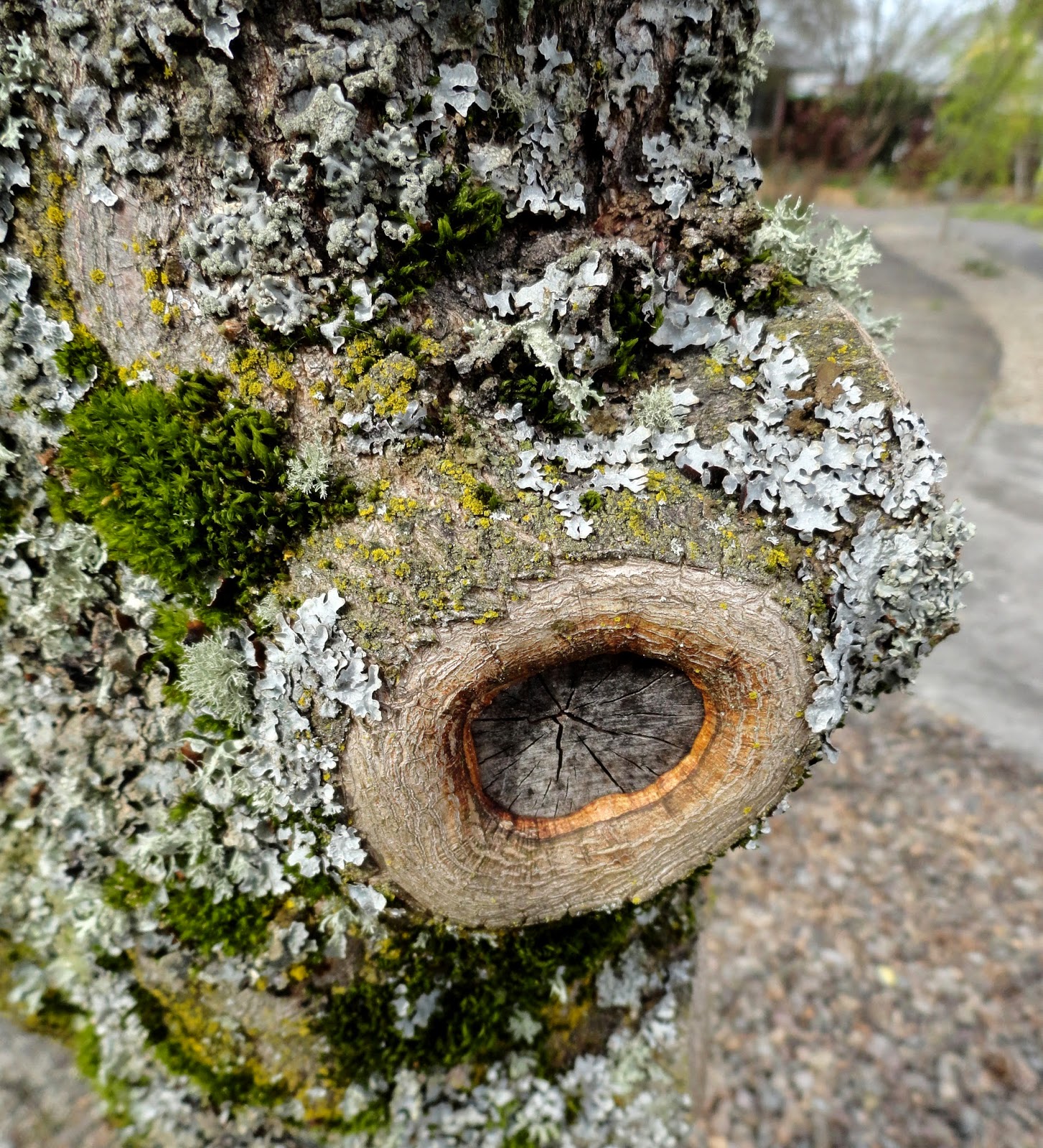 And a new cut. Are we just trying to abuse these trees into death? No. While I wouldn't mind their demise that isn't the case. They just were dumb choices for street trees and we're paying the price for their having been planted. We're cutting as needed so pedestrians, and cars, can pass by unaccosted. 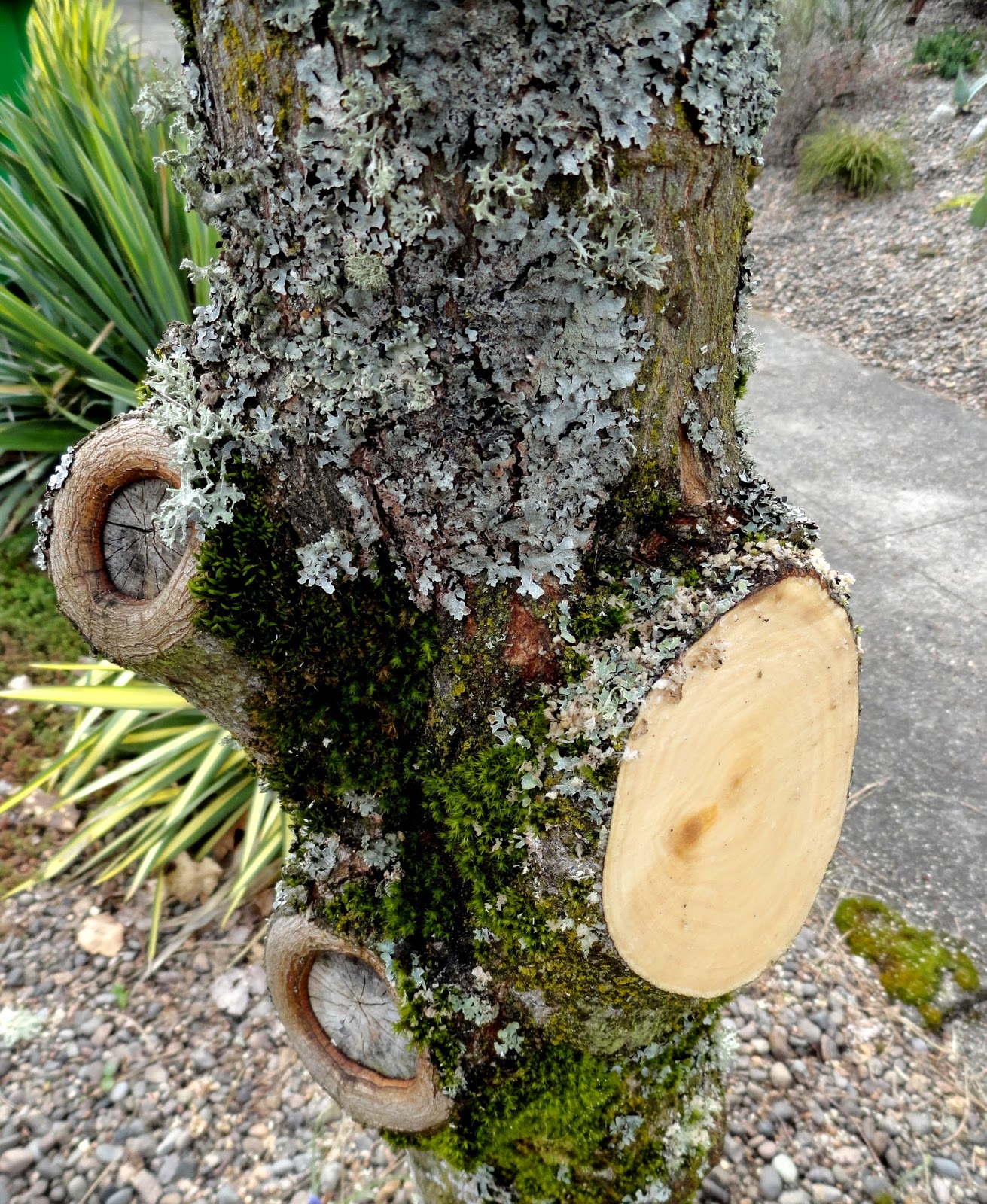 The wound is still dripping days after being cut, we should definitely have taken care of this earlier in the season (actual work done a couple weeks back). 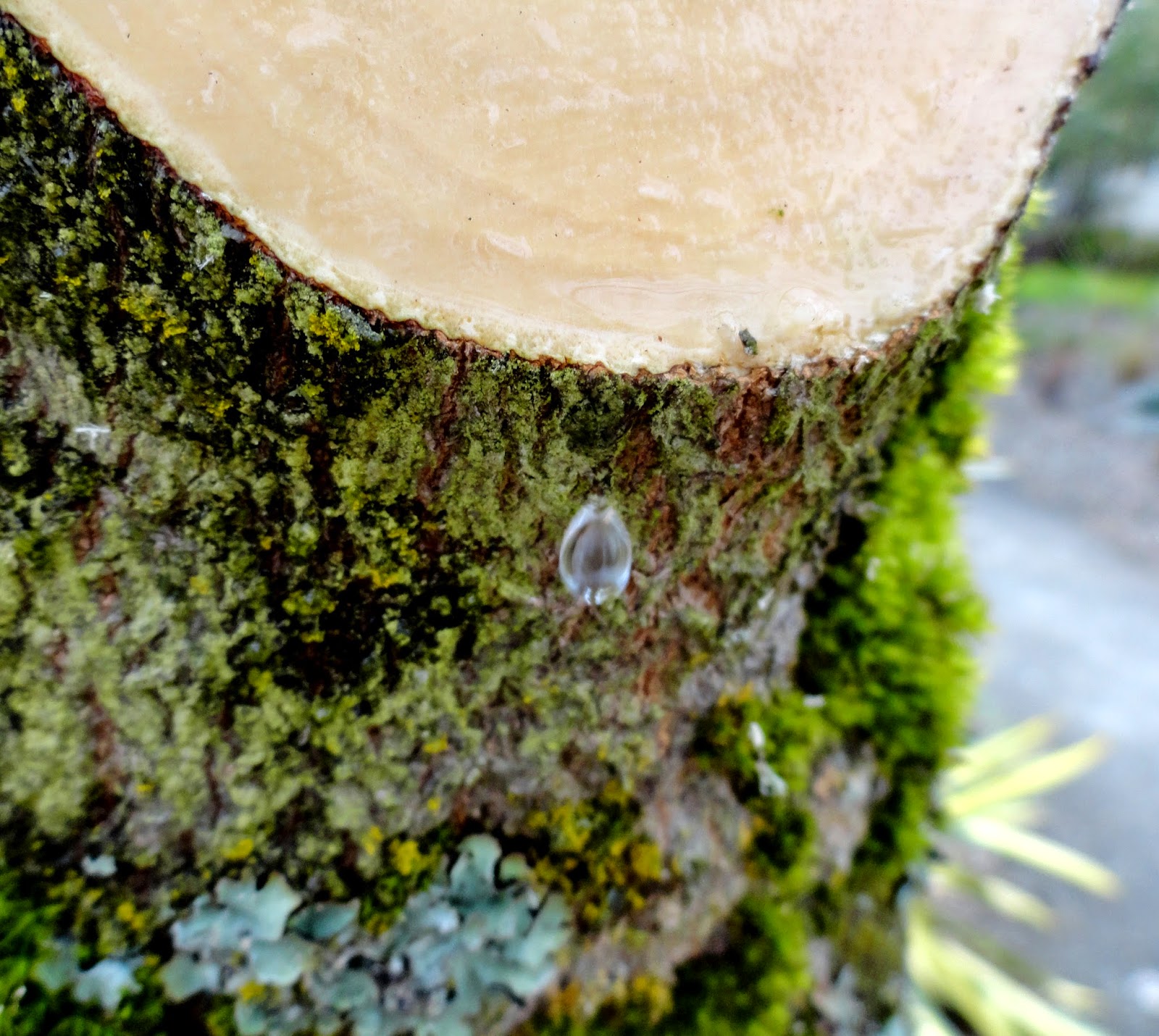 With these last two cuts I think this tree can finally carry-on, blooming and growing, without impeding sidewalk traffic. The other tree of the pair branches lower, but mostly in a pattern that keeps the branches away from the sidewalk and street. They are definitely not a matched pair. 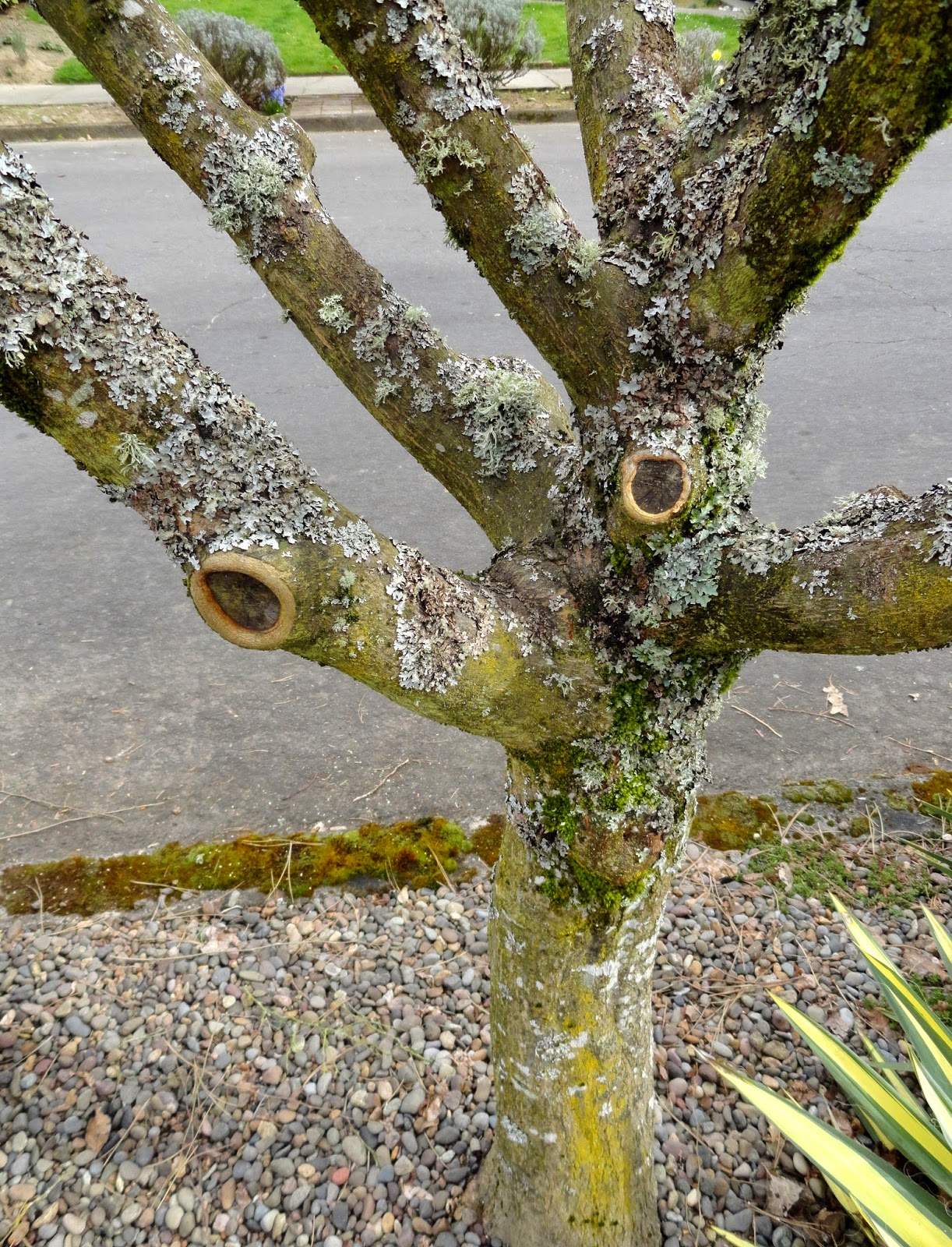 One other pruning cut to share. This on the Fatsia japonica, talk about soft wood. It was quite seriously like cutting butter, with a warm knife. 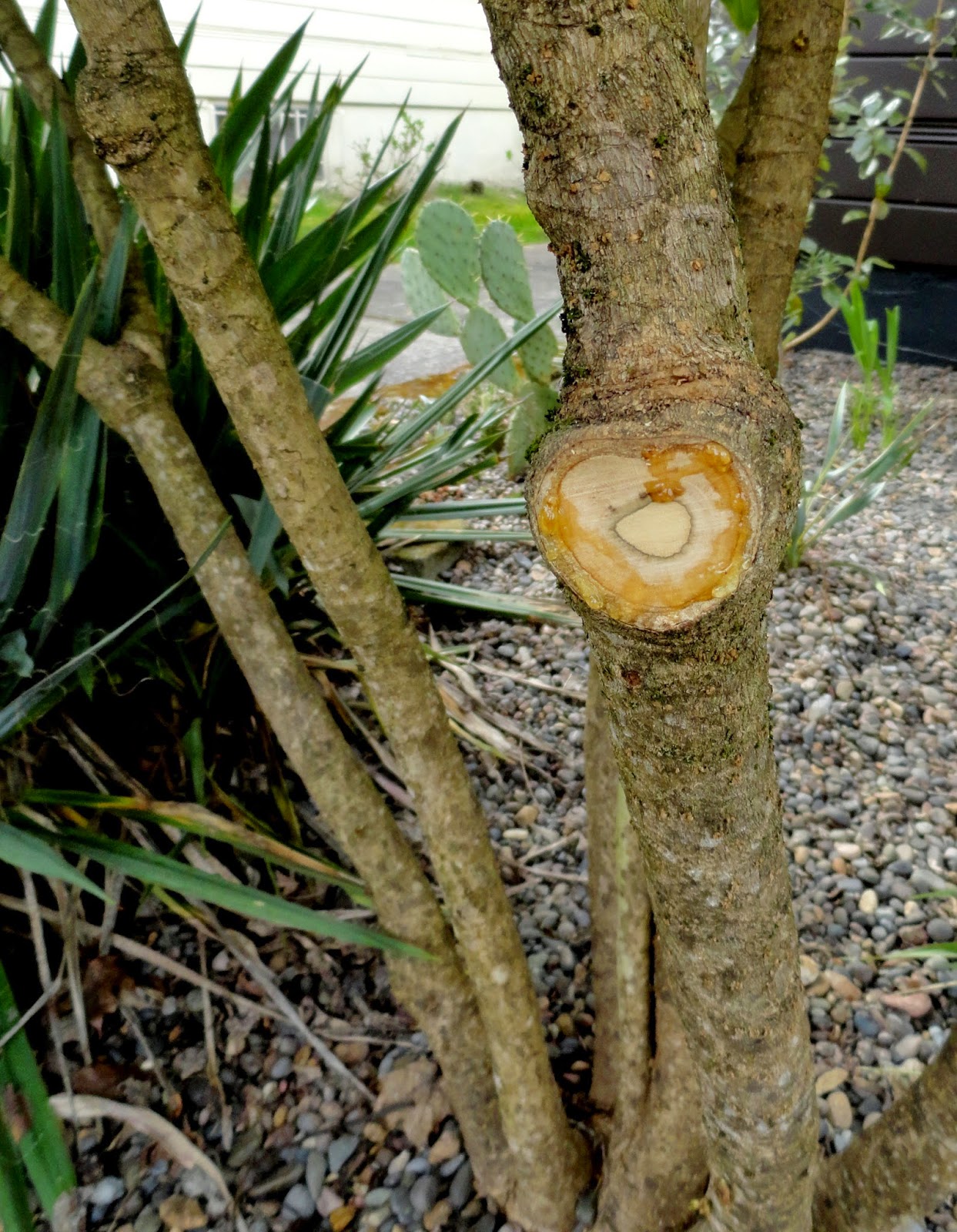 It was an awkward place to cut, and it looks kind of like a knee joint now. I hope it heals okay. At least the mailman no longer has to be slapped in the face by leaves everyday. 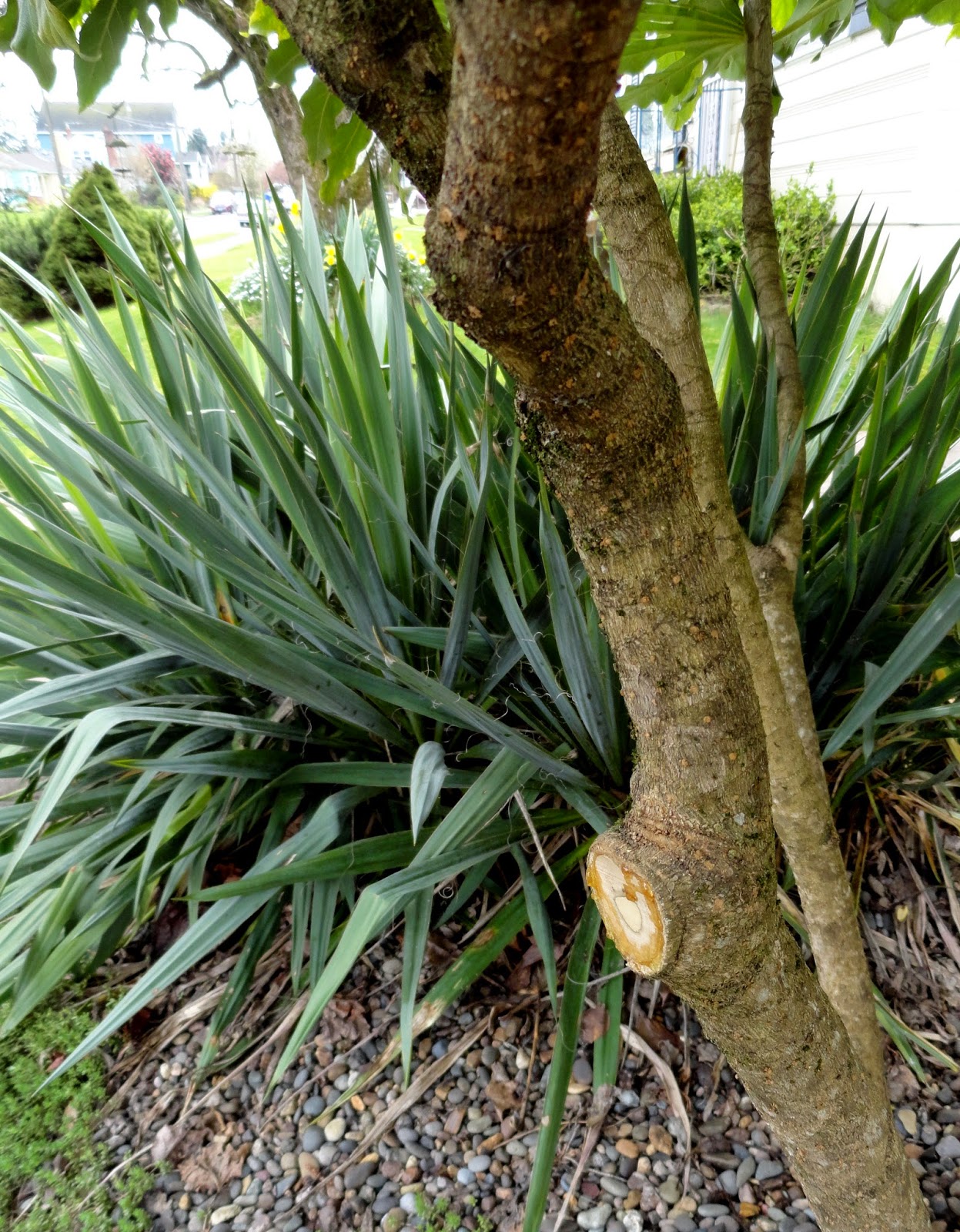 Labels: learn from my mistakes, Trees