Plant Jewels of the High Country

I picked up ‘Plant Jewels of the High Country’ at Powell’s Home and Garden Thanksgiving weekend. As a used book (published in 1972 by Pine Cone Publishers in Medford, Oregon) it was a bargain. Once I got home and started reading I realized just what wonderful little time capsule I’d found. 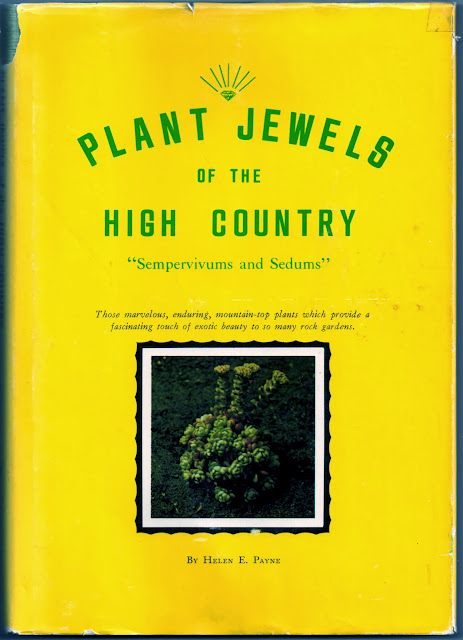 The author, Helen E. Payne and her nursery Oakhill Gardens, in Oregon, seem to have both passed on in the 42 years since this book was published. Whoever owned this copy was a fan of both Helen and her nursery. The book is autographed by the author and taped just inside the cover is a post card (shown below) featuring a green roof at the nursery, which Helen writes about in the book. Referencing semperviviums she says: “One of the most fascinating things about these plants is their tremendous will to live. I have known them to put out roots in midair, to root to a damp board and even on a bare rock. On tending to our sempervivum and sedum display beds, I often find myself with a surplus of plants. Once when carrying a “chick” which I planned to pot up, I paused to help a customer. I put the “chick” down in the nearest place, which happened to be a lava rock. Now, a year later, it is firmly rooted and surrounded by a family of chicks. As a further experiment, I tossed plants onto the metal roof of another shed which had a thin skim of fallen leaves, dust and totted branches from our towering oak trees. When the shed was torn down two or three years later, to my amazement I found that several of them had made large, healthy mats. Now I am in the process of planting sedums and semperviviums directly in the mossy limbs of an ancient oak tree which grows within a few feet of our back door.”

The printed text on the back of the post card reads “Oakhill Gardens – a garden in the European style. “Hen and Chicks” (Sempervivums) are grown on roofs from Norway to Ireland as a guard against lightening or a charm against the devil” 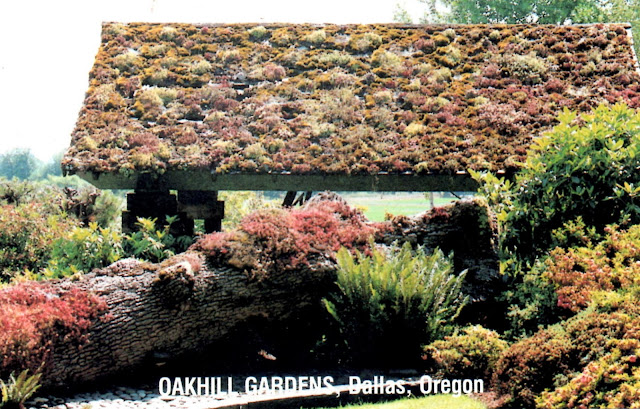 The book dedication reads “To Slim (her husband) without whom this book could never have been written” and just under in a cursive script there is a note added (presumably by the books former owner), it reads “who died 2 ½ years ago – (July 1989 today).”

The book is full of hard earned wisdom and a few signs of the time. For example in the introduction we are told “In order to keep the price of this book as reasonable as possible ($15), the number of color plates was necessarily restricted. While the decision to not show some items was arbitrary, other photographs were not easily available.” We live in such a different time, color images surround us.

Writing about her beginnings…“A windfall, a very small inheritance from a great-aunt whom I had met only once, and I had a small greenhouse built. Looking around the 12 foot by 20 foot space, I wondered how it would ever be filled. This is a standard reaction, no matter what size the greenhouse. I became interested in propagating azaleas and camellias, and before long the greenhouse was full and overflowing. The next step… a small nursery business.”

And going into detail about the semps… “The mother hen will usually bloom in its third or fourth year. Let it. If you want to see the bloom, but don’t let it go to seed. Sempervivums cross as readily as fleas in a hopper, but the seedlings are seldom as fine as the named hybrid plant. Remove the flowering stem by running a sharp knife around the base of the plant, creating a small hollow. Add a tablespoon of soil to this hollow and place one of the chicks in it so that an ugly bare spot is not left. If it is a good sized clump with many chicks, they may usually be gently pulled or twisted around until apace is closed. The blooms of the smaller sempervivums may be snipped off with scissors since their stems are more slender.”

There is also a healthy section of the book devoted to sedum. Talking about propagations she notes: “It has been said that most succulents can be propagated from leaves or parts of leaves. This is not true of sempervivums or hardy sedums with the exception of Sedum dasyphyllum glanduliferum. All the hardy sedums must have stems and leaves. No sempervivum can be propagated in this manner. You must use one of the offsets or “chicks”. A further word of caution: do not set the rosette too deep. Many people do this thinking that they are protecting the plant, instead of which they are inviting rot.”

On pg. 117 I came face to face with proof that there is really nothing new “Discarded farm plow discs make excellent planters. Ask or them at a farm machinery supply store. Be sure that the outside edge is not dented or too badly worn.” And here I thought plow disc planters were a relatively new idea! 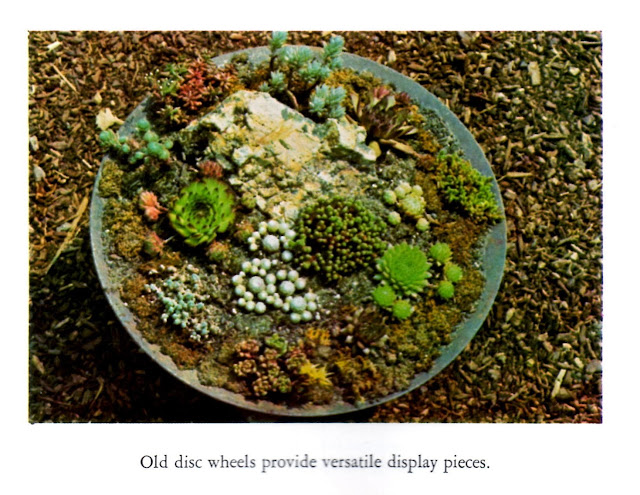 Inside the book I discovered a pair of articles cut from our local newspaper, The Oregonian. Dated July 21, 1989 and June 8, 1990 they both carry the byline of Dulcy Mahar. I only know Dulcy as the author of a much loved column which appeared weekly in the Homes and Gardens section of the paper. It was interesting to learn she was once a reporter for the paper. Here's a photo of Mrs. Payne... 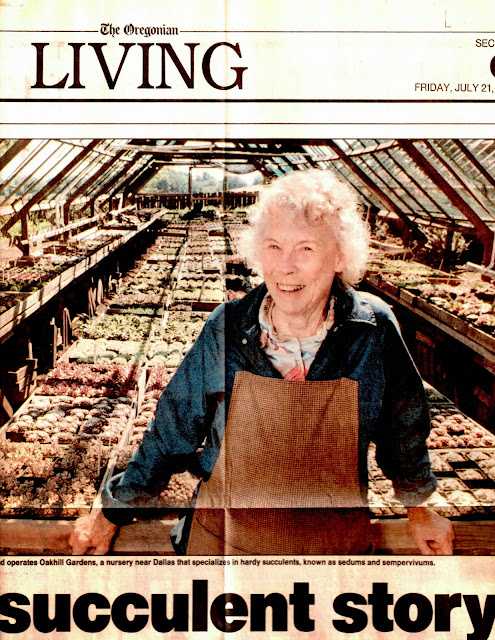 There is a sizable section of the book given over to descriptions (and a few photos of) select semps and sedums and then the book wraps up with 15 pages devoted to sharing her experiences collecting plants in the field (a fun read). Finally tucked in before the requisite credits, bibliography and mentions of specialists and collections, is a page that says simply "To see..." followed by a list of 11 scenes such as:
...a preview of spring in the returning color of the sempervivums;
...in the shining mountains of the Sierra Nevada, obtusatum growing on a white granite ledge;
...spathulifolium purpureum shining blood red in a spring rain;
...from season to season, the folding and unfolding of the lunar rosettes of Silvermoon...

I wish I could have met Helen E. Payne.