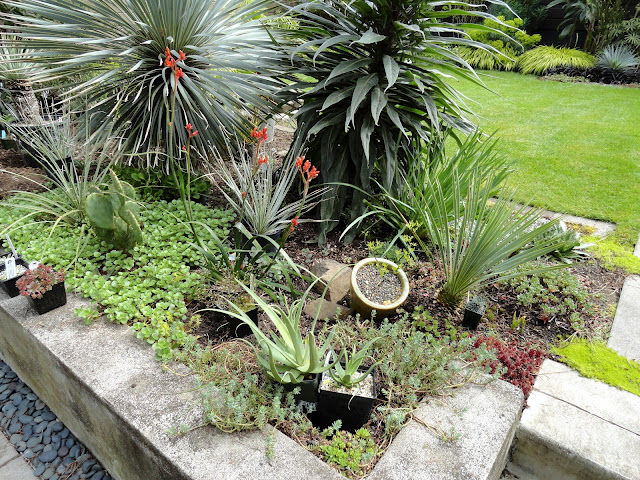 Surely you’ve heard the phrase “scope creep?” Well that’s what happened here. Since I was already working on the area between the upper back yard and the patio why not go ahead and use that pile of rocks I’d been accumulating in the garage? I’m not sure how so many random pieces of basalt ended up here, most of what we find when digging are big round river rock. These must have all been collected by previous owners of our home on their travels? Well, with the exception of two, which we brought back from a trip home to Spokane, WA (aka basalt central). 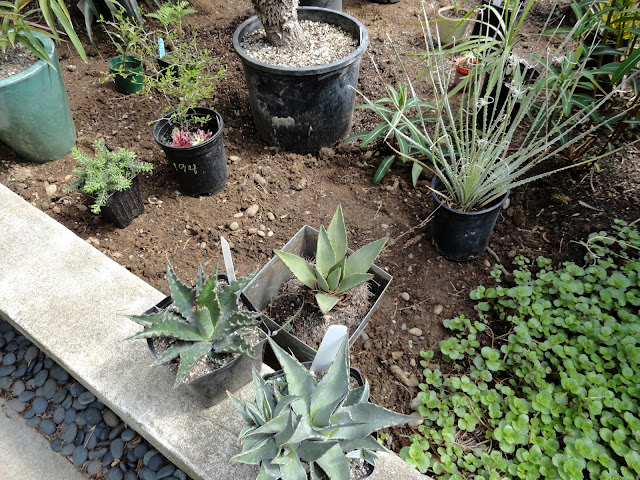 Since I wanted to incorporate more Agaves in to this area I decided it was time to make use of the rocks. I worked on these two areas at the same time I was planting the main border, moving plants around and getting as sense of what worked where.

That’s when I took the photos you see above, here’s part of the rock collection… 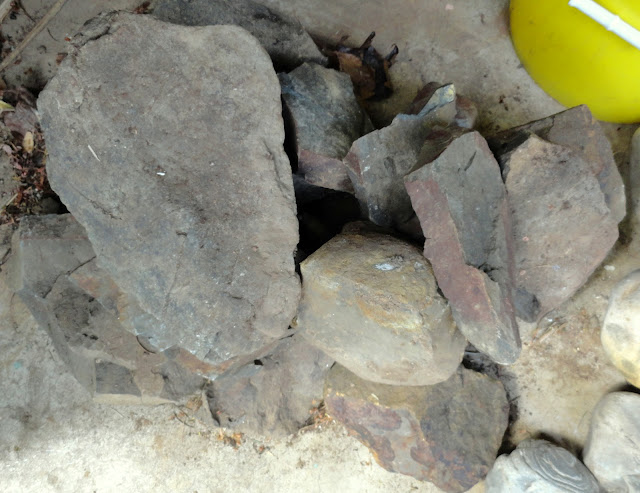 My thought was that the basalt blended so well with the color of soil that I could use them to build up the planting area and provide better drainage for several agaves without making it look like I added ROCKS for ROCKS sake. But then I had to go and get all drainage concerned and added a bunch of pumice to the soil. Great for the Agaves…bad for me. I temporarily forgot how pumice works its way to the top of the soil and looks like dandruff, a white snow across otherwise rich chocolate earth. Time to bring out the gravel, pea gravel this time. So as not to overwhelm the small plantings, or the basalt chunks.

Here is the first rock pile, right next to the steps up from the patio… 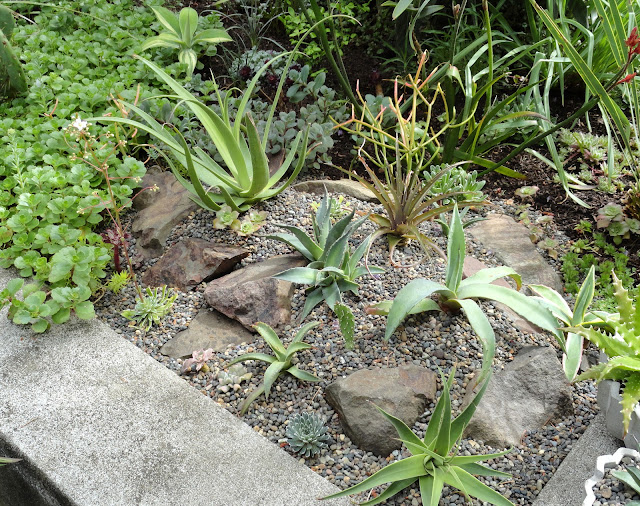 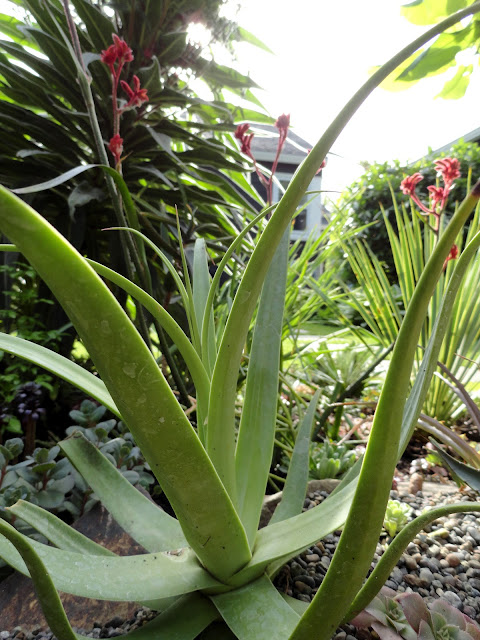 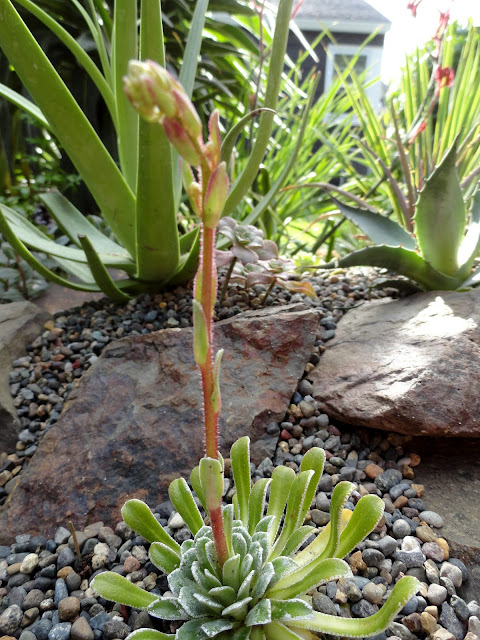 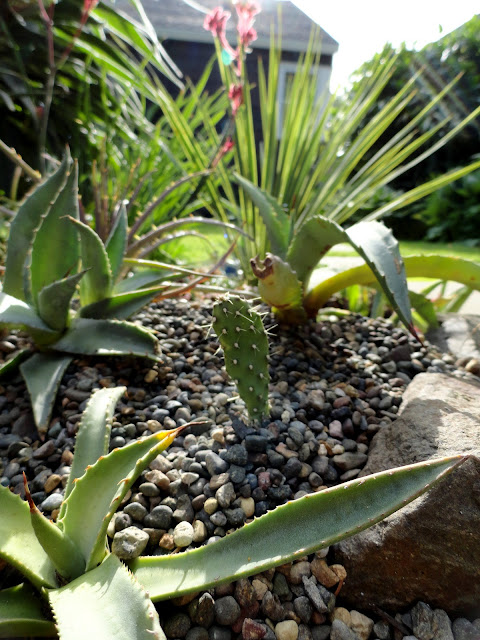 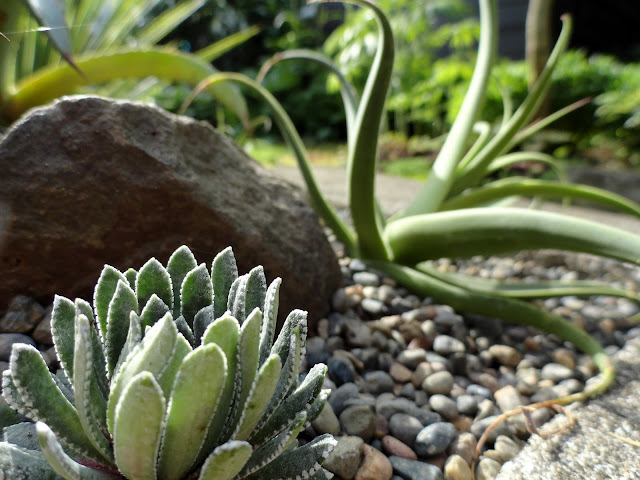 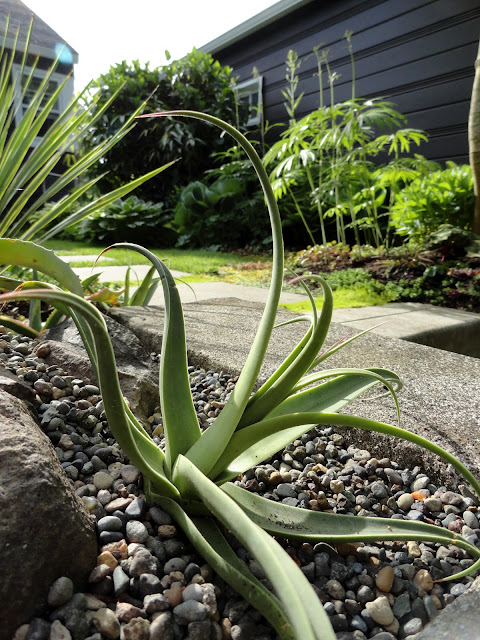 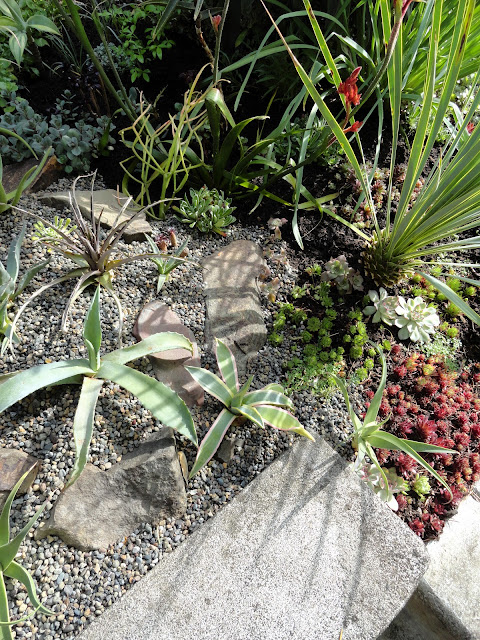 I was a little concerned that when the first heavy rain came it would wash the small gravel off the mound and away, but the first test came sooner than I thought it would. While we were away in California, Portland experienced a record setting 1 hour rainfall of 1.02" (record setting for May). Not a problem!

Here is the second rock pile, to the north of Sammy (the tall Yucca rostrata) and to the east of lil ‘Sanford. 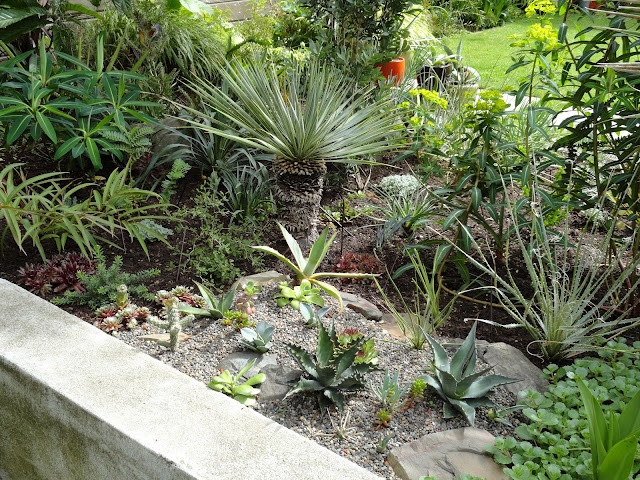 Is anyone thinking…those Agaves are TOO CLOSE TOGETHER?! Well…I’m in Portland, Oregon. Not Arizona or New Mexico. They will not grow all that fast (unfortunately). In fact (the horror) some of them may not make it through next winter (there is a mix of hardy, borderline, and "just for fun" plants). We will see what becomes of my little rock piles…but for now, I’m loving them! 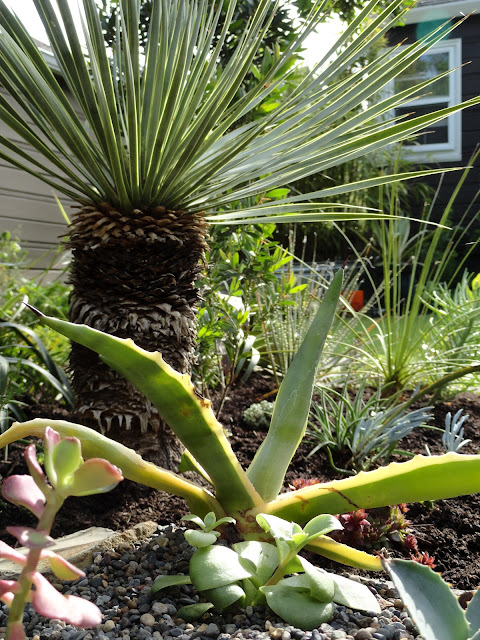 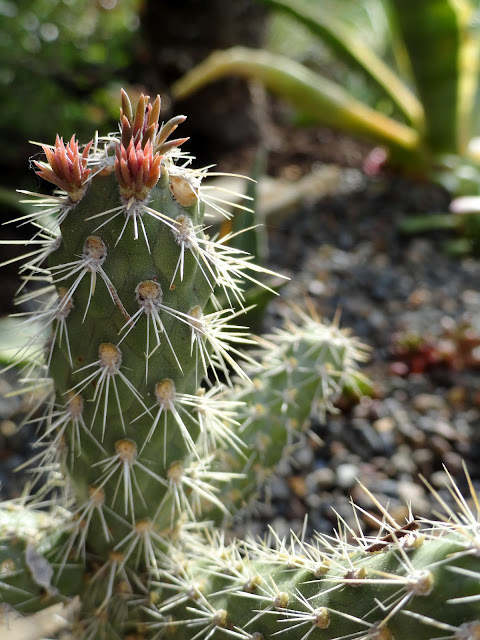 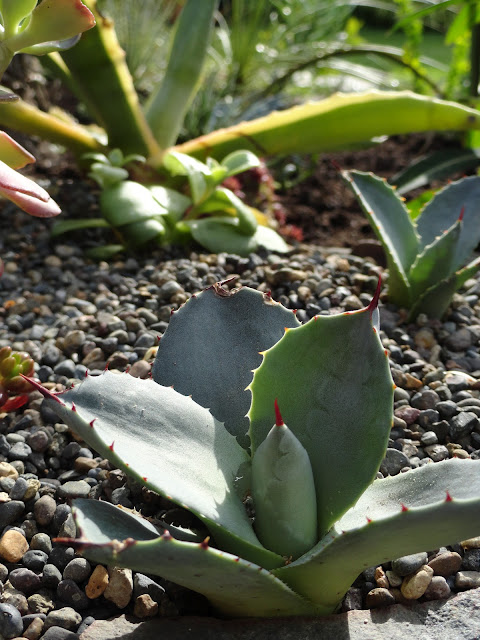 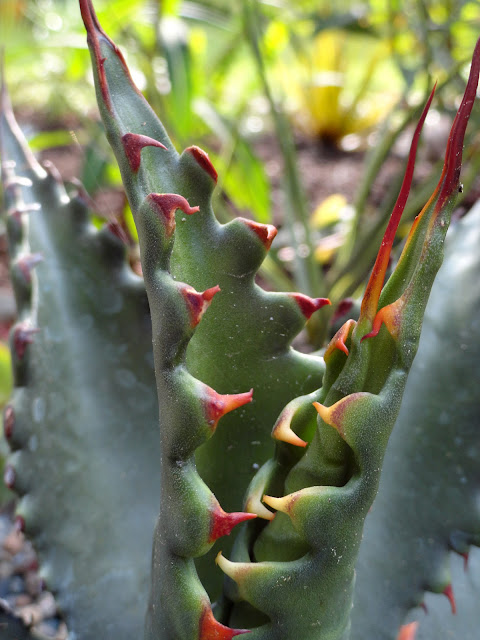 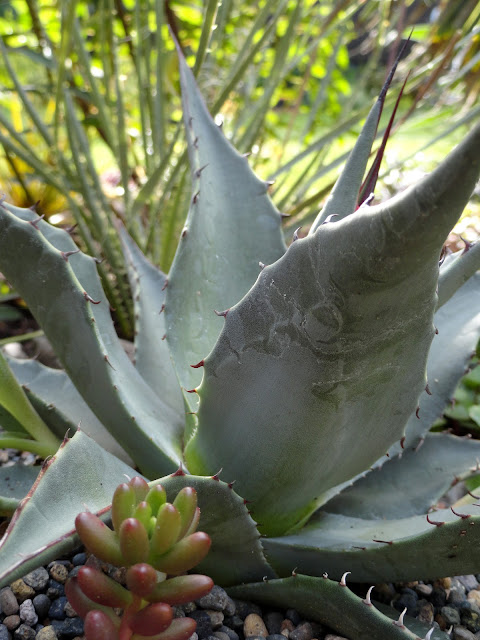 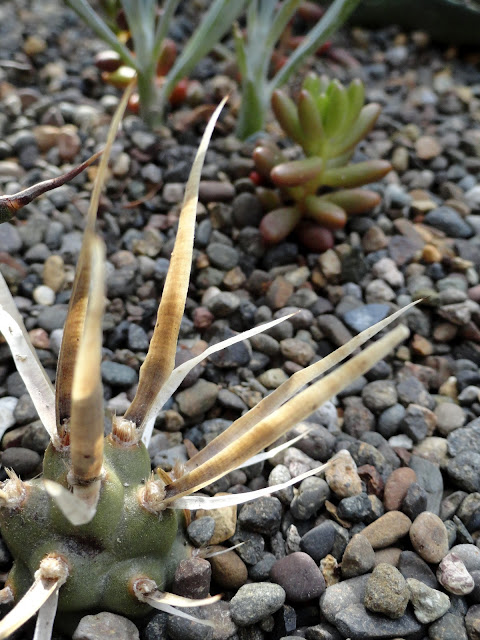 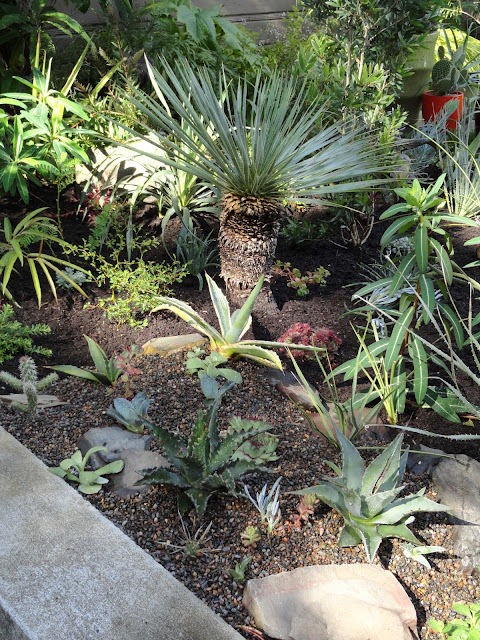