In a Vase on Monday, Aloha Pepeluali! 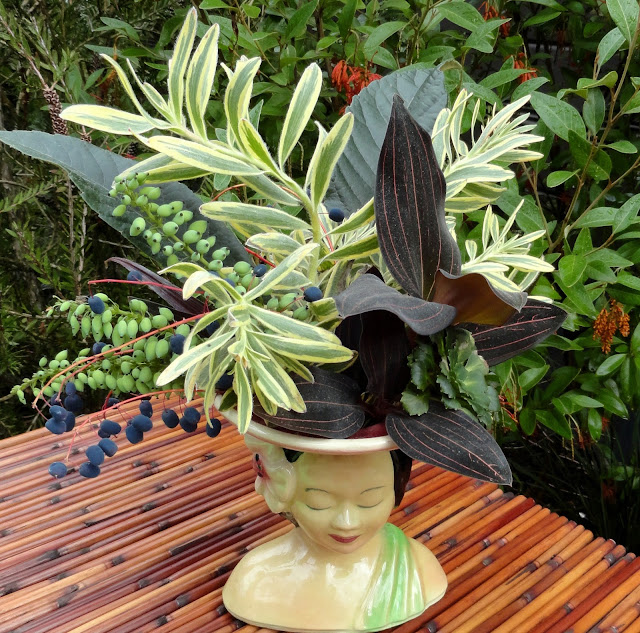 Was inspired by the fact my pass-along Schlumbergera truncata (from my friend Peter, the Outlaw) is blooming for the first time. I needed something fun and tropical to join it on the dining table... 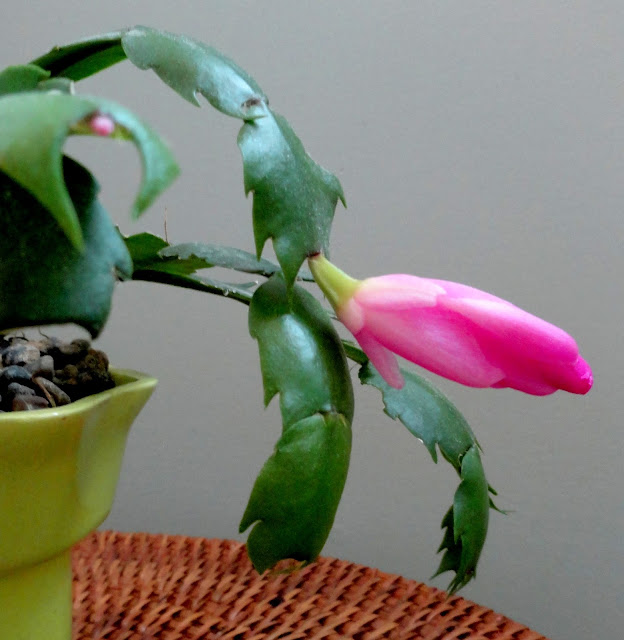 Elements in the arrangement include a pair of Loquat (Eriobotrya japonica) leaves... 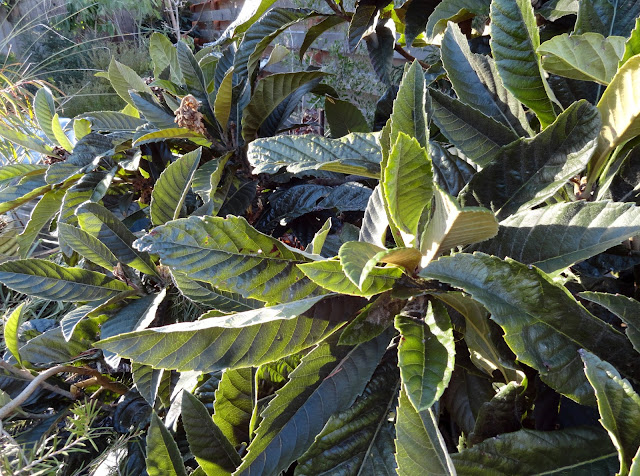 A half-dozen magenta spikes with blue berries from a Mahonia gracilipes. 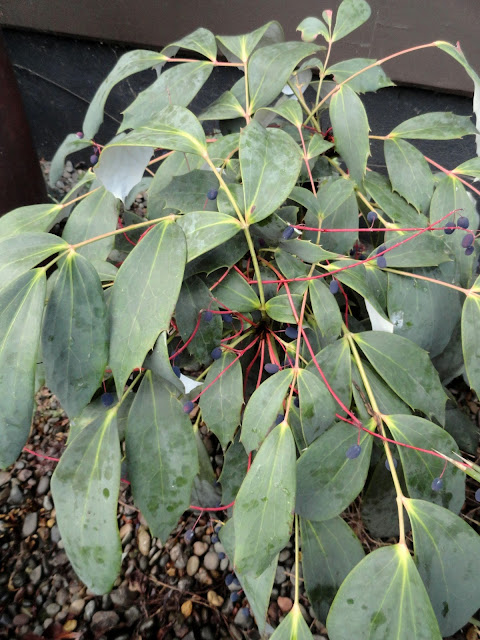 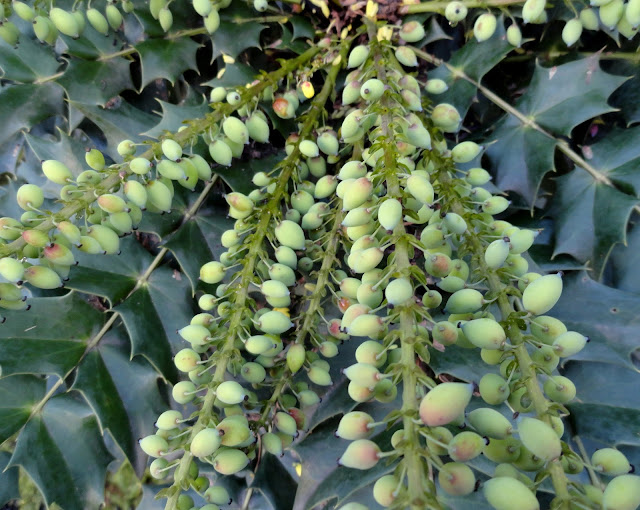 A couple cuttings from Ludisia discolor (rooting them for a friend). 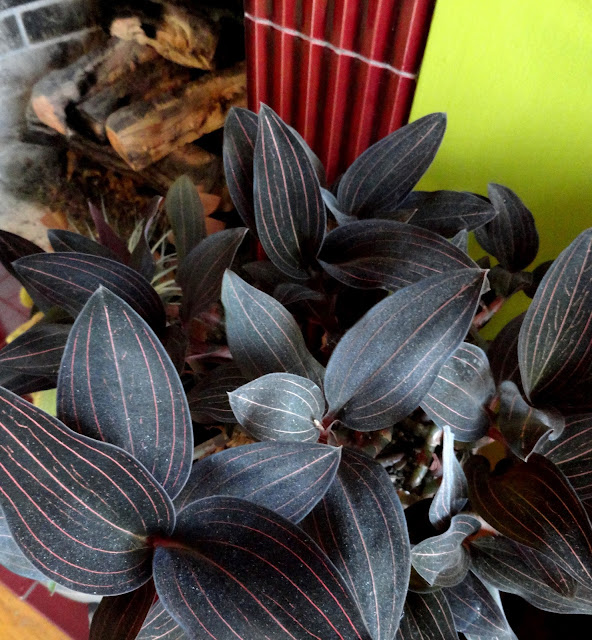 And finally, a piece of Saxifraga urbium ‘Aureopunctata'. 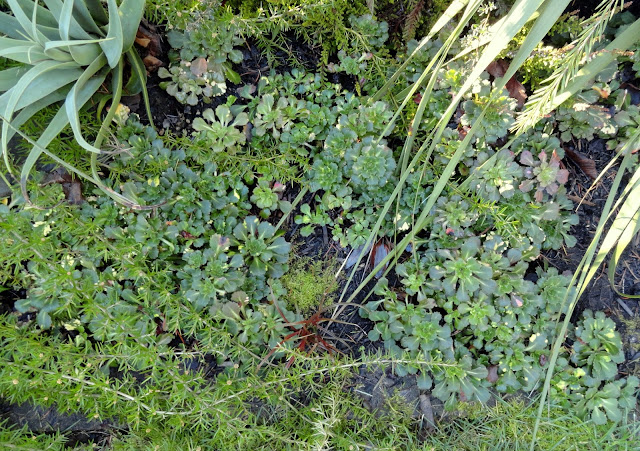 My goal was to come up with something vaguely Carmen Miranda-esque for my vintage Shawnee pottery head vase. Oh wait, look at that! There are Leucadendron 'Safari Sunset' 'Jester' (thanks to Kris for catching my error) branches in there too! Yes, also from my garden...although it's a plant I recently purchased (at Cistus) that's still in it's nursery pot. 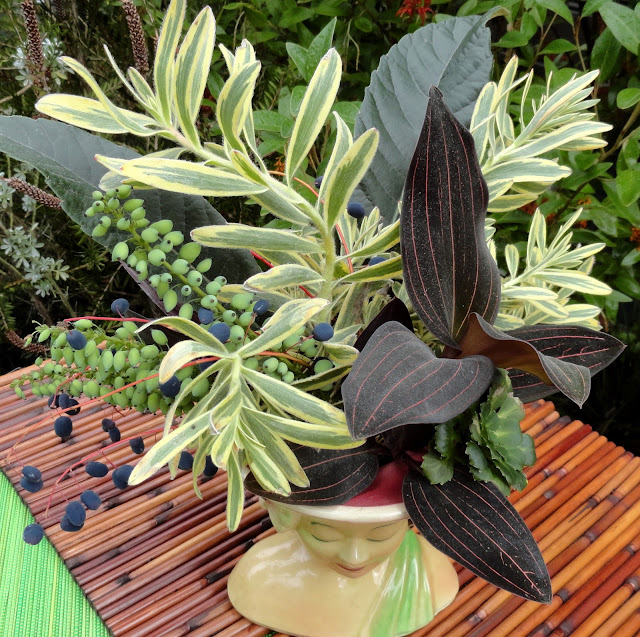 The Saxifraga acts like a nice big flower, even though it's green. 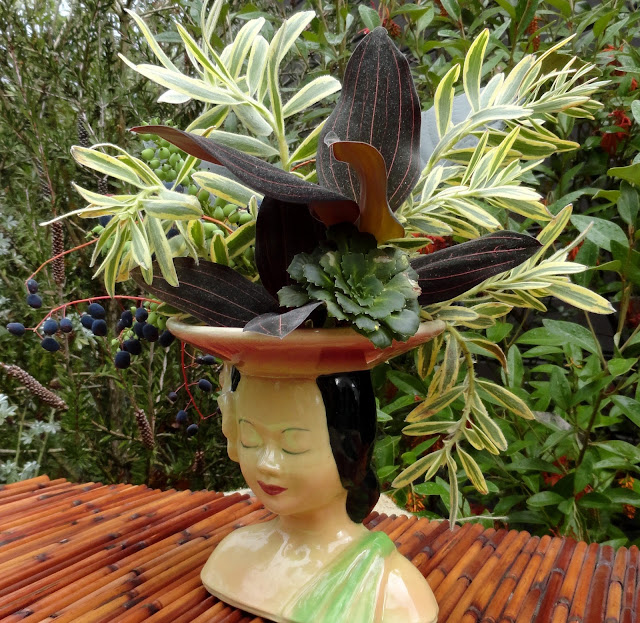 And the Ludisia discolor adds drama. 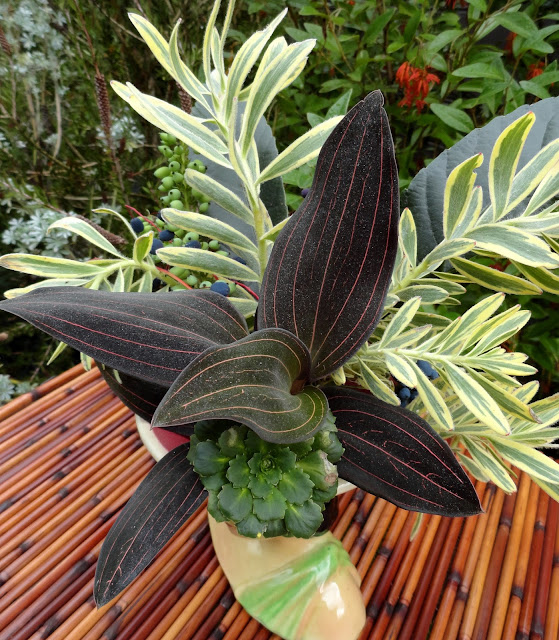 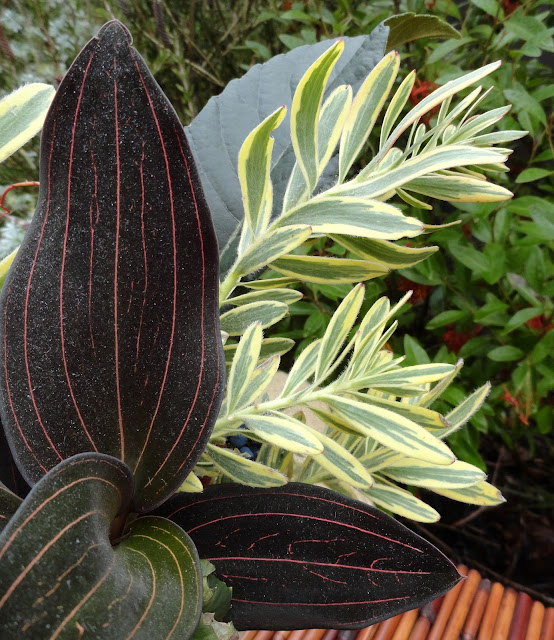 I took advantage of a break in the rain and went outside to shoot, where the natural light made it possible to see all the colors. I also found the depth of colors showed up better against a planty background than when in front of a solid color (like our garage door - where I usually photograph arrangements outdoors). 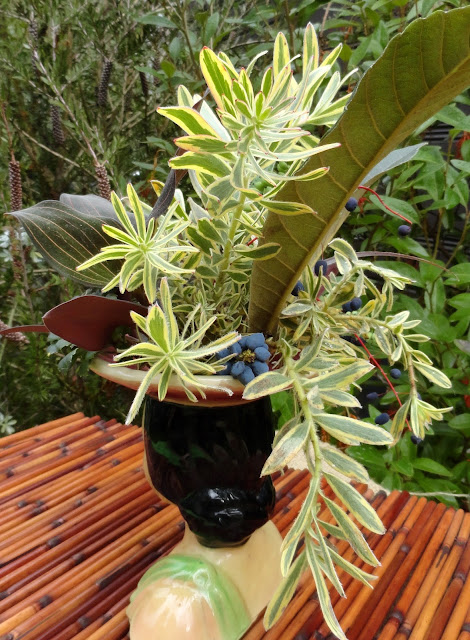 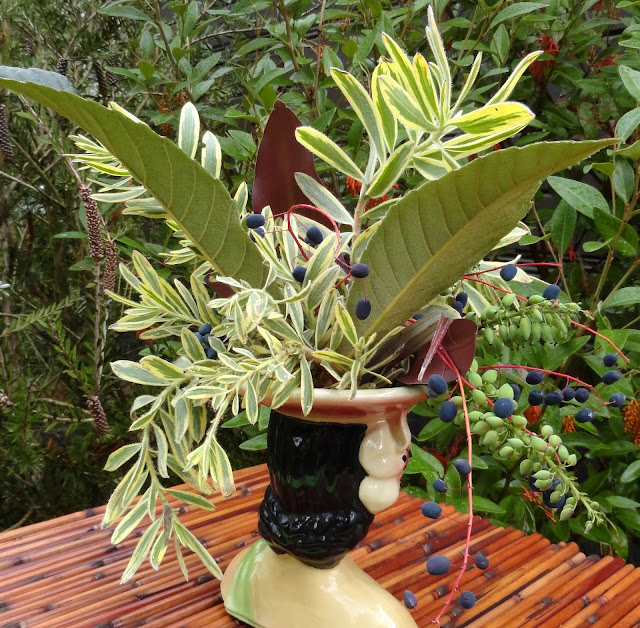 Even though I was finally able to capture the colors and detail of the "ingredients" I'm still not thrilled with these images. It was difficult to capture the overall composition and share it with you the same way that I see it. The pieces work together so much better than it looks like they do! 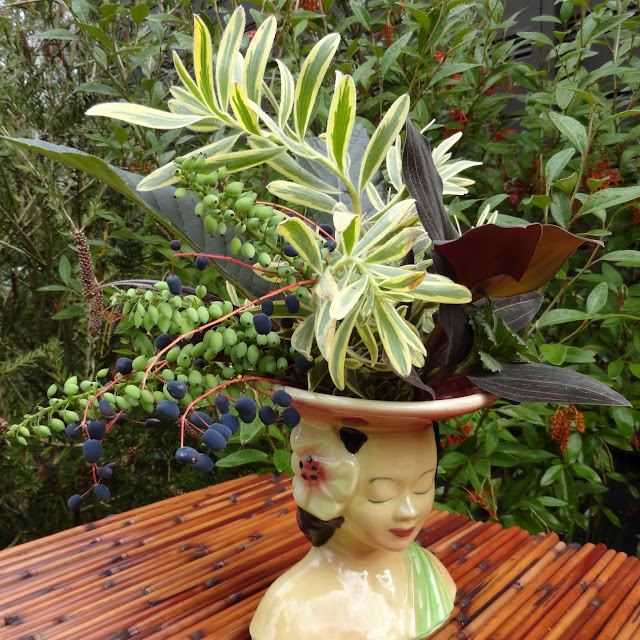 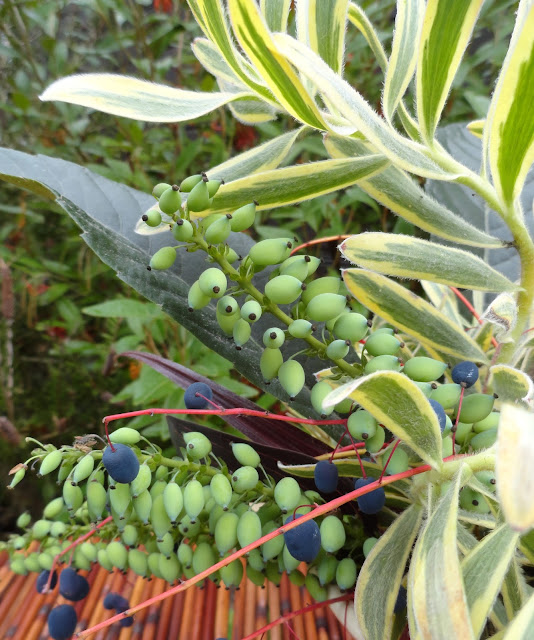 Here's the pair on the dining table... 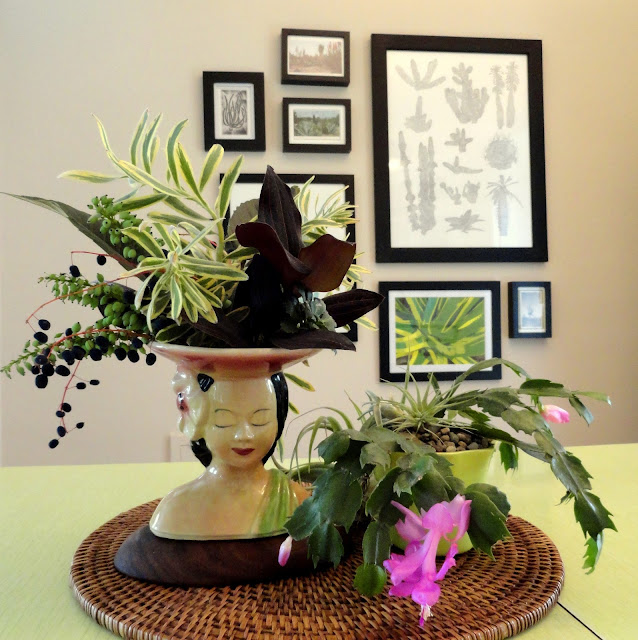 And aren't the Schlumbergera flowers fabulous? 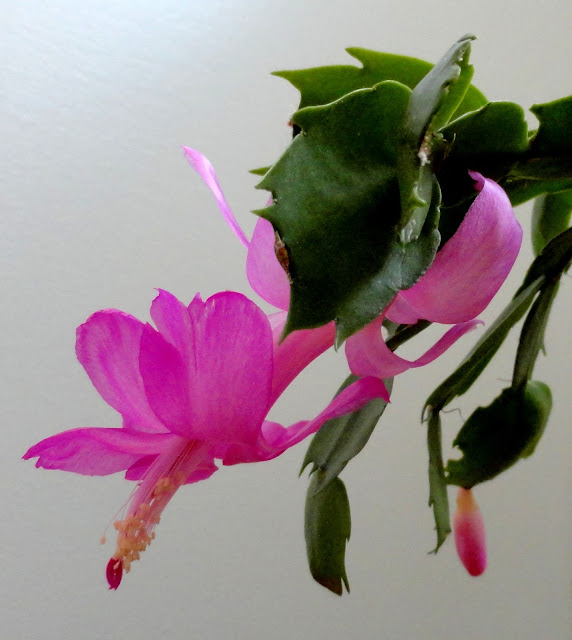 Cathy, the brains behind this weekly excuse to get out in the garden and collect things for an in-house arrangement, blogs at Rambling in the Garden. Visit her blog for links to all those participating. Oh and my title, "Aloha Pepeluali!", is "Hello February" in Hawaiian. At least I hope that's what it means! 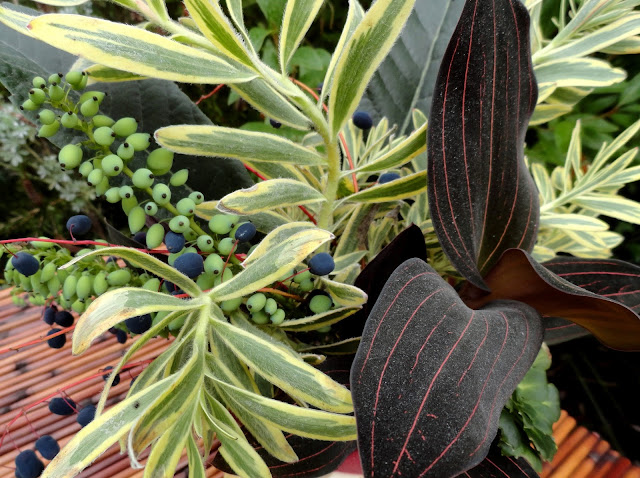