In a Vase on Monday - The Goodwill Challenge

No, it's not another Challenge in the same vein as the Ornamental Cabbage & Kale Challenge or the Poinsettia Challenge – this one's personal. Issued directly to me, and only me...quietly at the Goodwill. You see I'd spotted this... 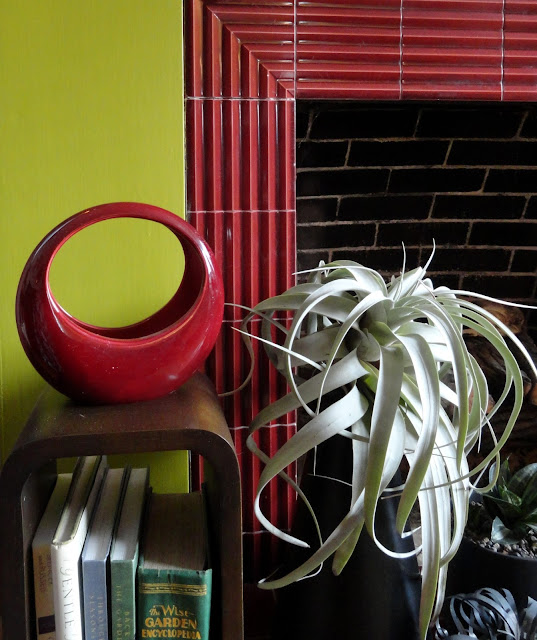 And was very intrigued. It immediately reminded me of the beloved Circle Pot from Potted... 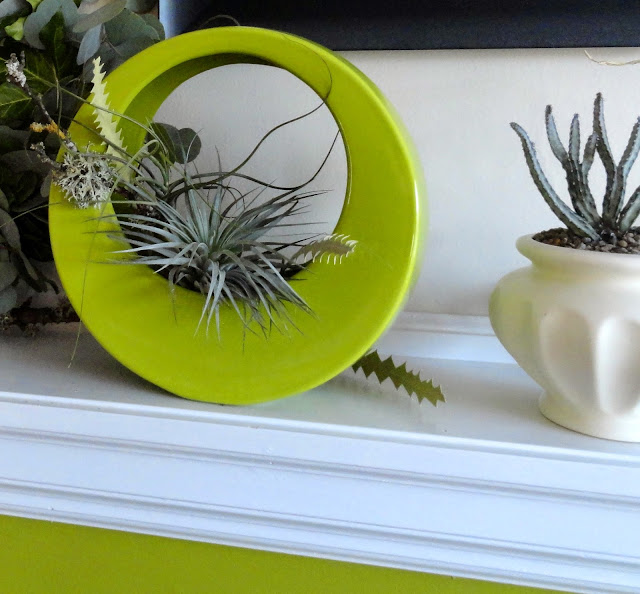 But yet, it wasn't quite right, there was something vaguely "Nagel" about it. Which gave me an unpleasant shudder and sent me looking elsewhere. Finally, I circled back around. It had really fired up my imagination. 60% horrid, 40% good...and it did match the tile around my fireplace...maybe I should buy it? At the huge price of $2.99...it was hardly going to break the bank either way, but I'm not a fan of accumulating clutter, just because it was cheap.

Then I realized what else it reminded me of. Circle pot from Potted = good. Sculptura Circle (Donut) Phone from the 1970's = not so good. Don't know what I'm talking about? This photo (found here) should help... 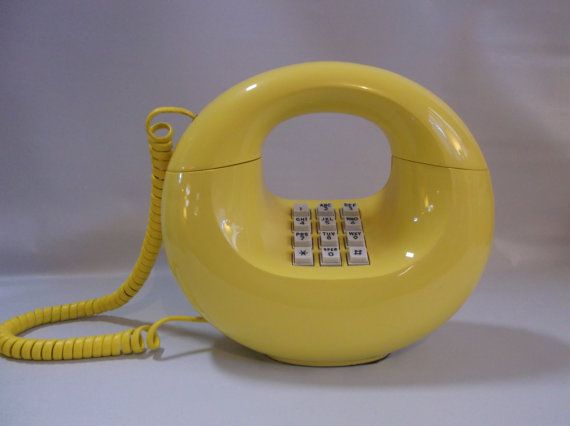 Yes, and lucky me I had one of those in my room as a teen. Go figure. The final straw was a fellow shopper who decided to lecture me on how "wrong" the shape was for a vase. "It will, you know, contain the flowers, hold them back...don't buy it, nope...nope...nope." Well okay then, that settles it, I couldn't pay for it fast enough.

But what to put in it? Something with a blush of burgundy, like the new growth on the Melianthus major 'Antonow's Blue'. 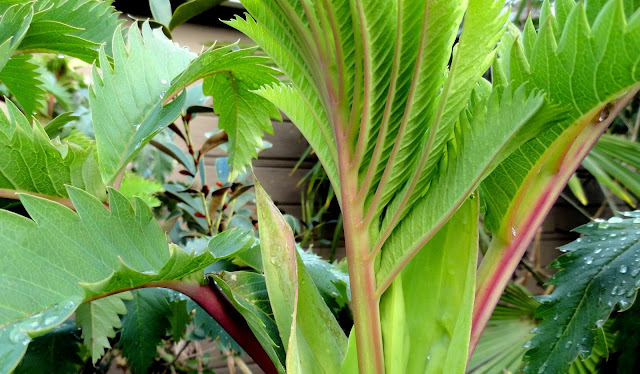 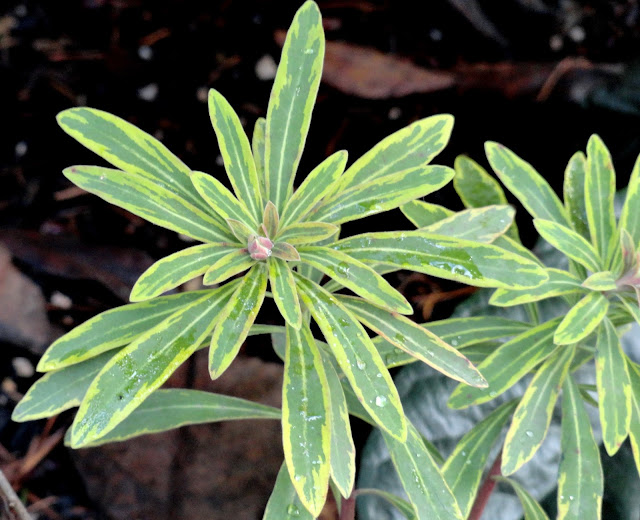 And not so subtle. Love this combo but there's no way I'm cutting a branch from my variegated Daphniphyllum. 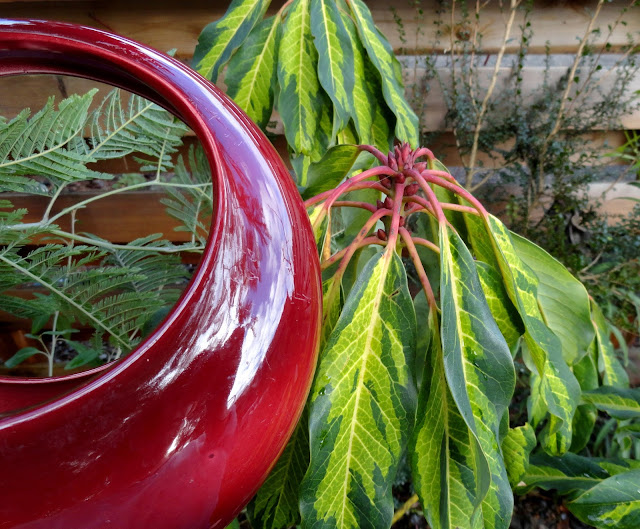 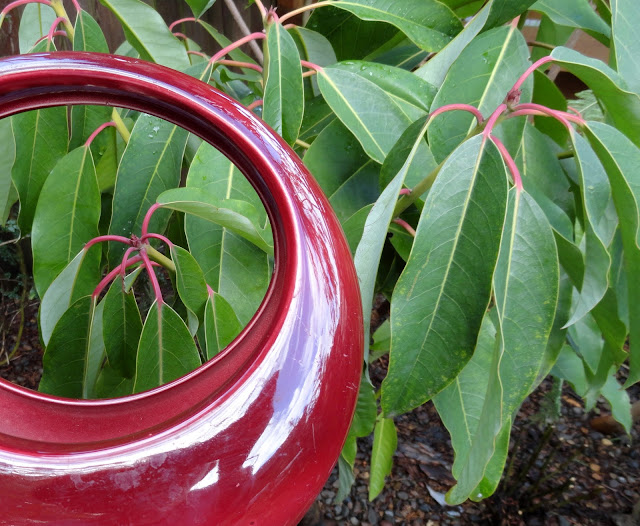 In the end I went with the Melianthus foliage mixed with a couple sprigs of Euphorbia x martinii 'Ascot Rainbow'. I liked it – but decided it needed one more element, something to break up the green... 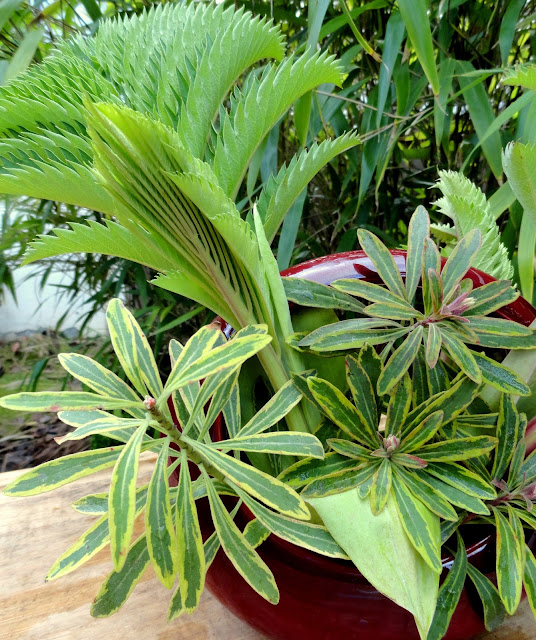 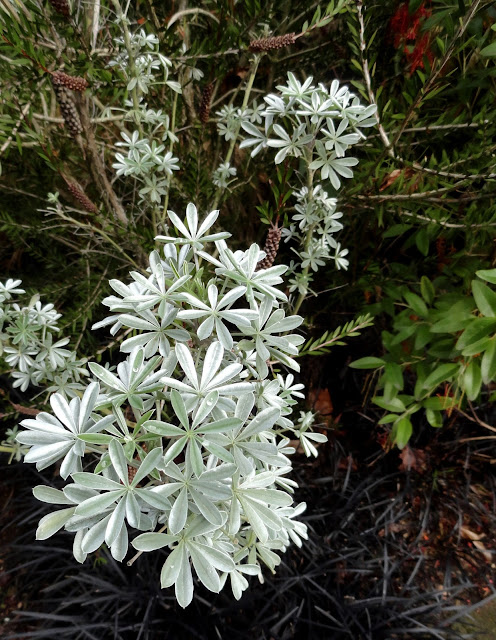 I like how the color contrasts, while the shape echoes the Euphorbia. 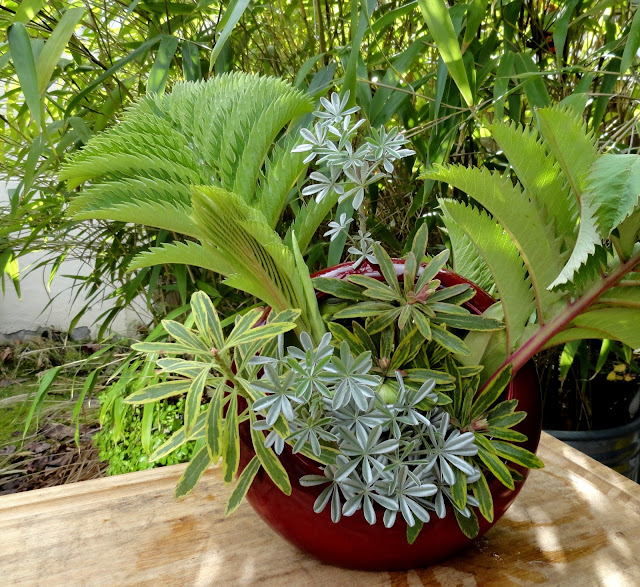 The finished item. Do you notice something missing? Something that was in the photo just above? Ya – I'd created a two-horned monster. Ugh. So one of the Melianthus stems was chopped, sadly that took away the blush of color too, but once I'd seen the horns I couldn't unsee them and it had to go. 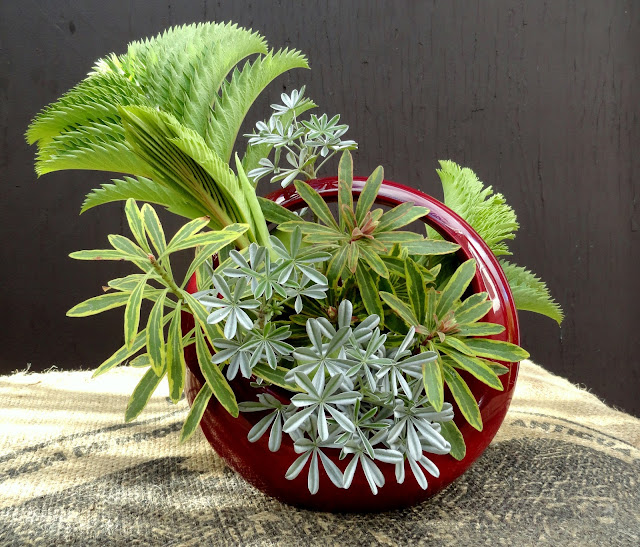 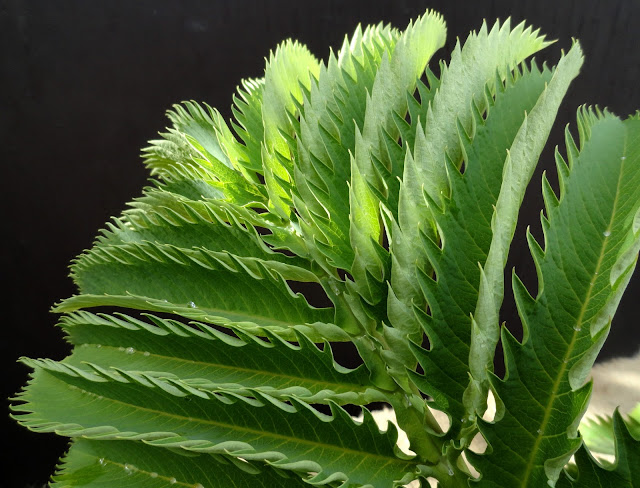 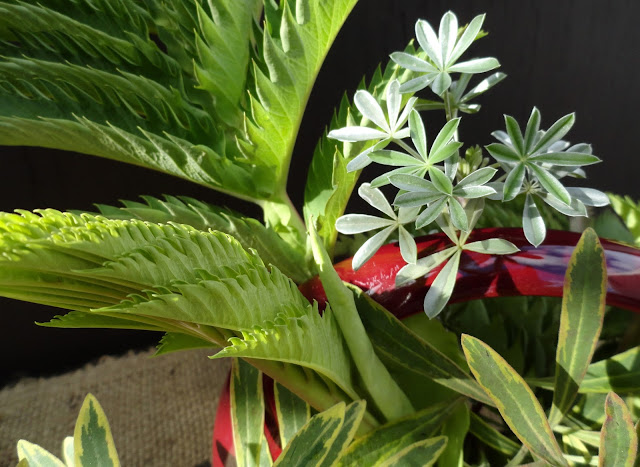 Have you noticed I'm working on this arrangement outside? 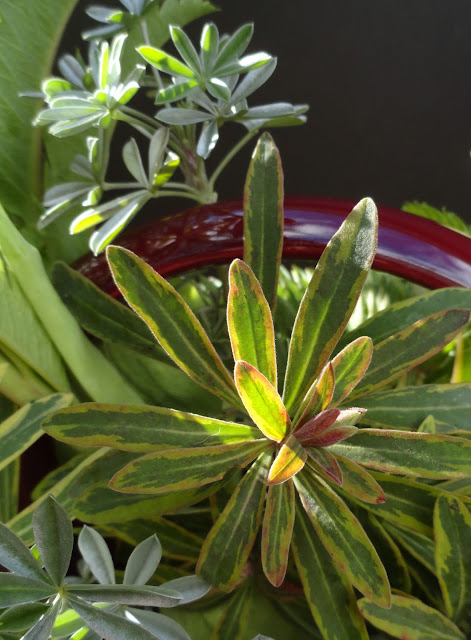 It was a GLORIOUS 59 and sunny. I was giddy. My apologies to those of you suffering the winter storm on the east coast – but I was experiencing a severe case of spring fever. 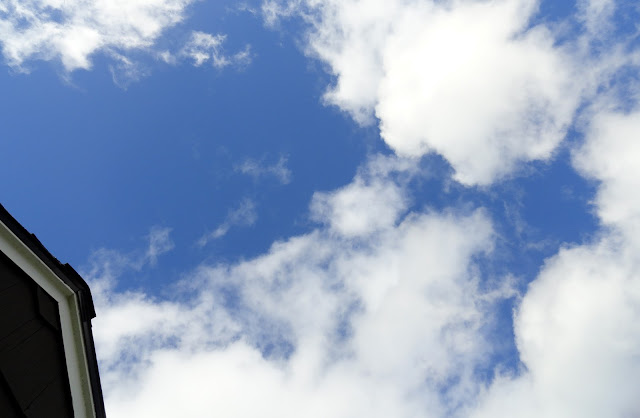 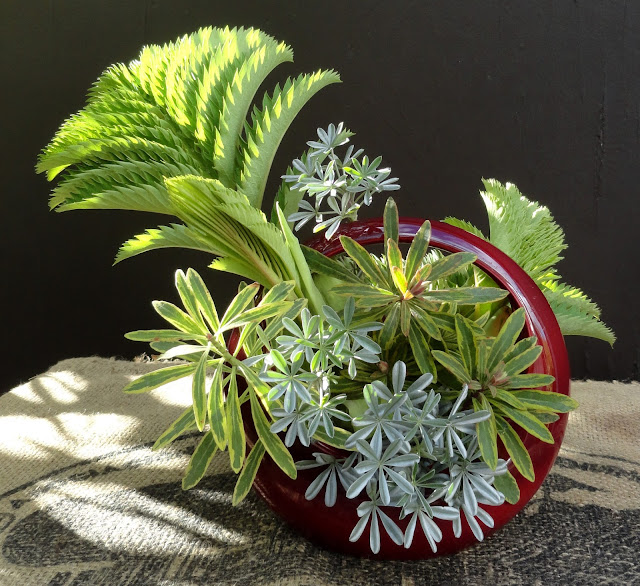 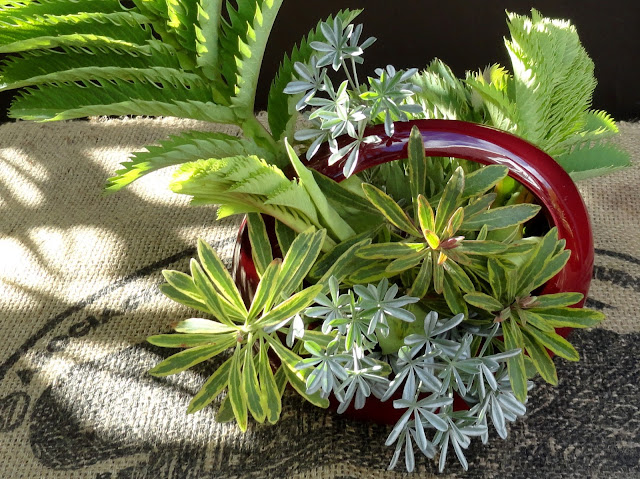 So that's that. My answer to the Goodwill Challenge... 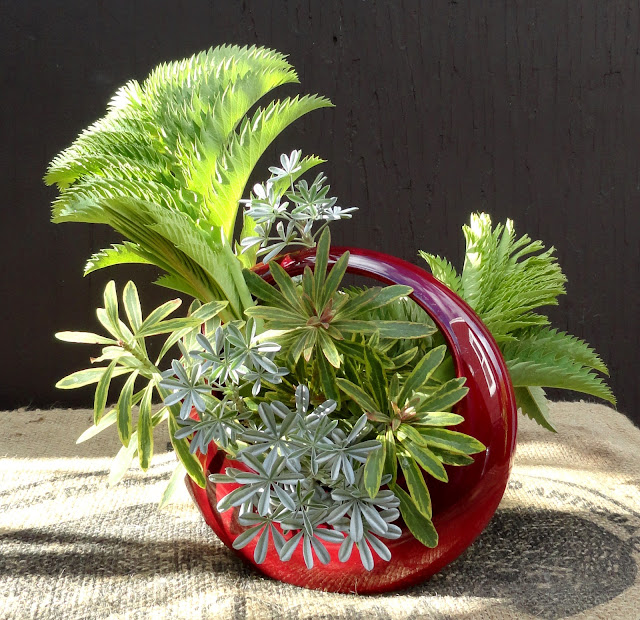 More vases filled with gardeny goodness can be seen over on Rambling in the Garden – our hostess for this weekly adventure. 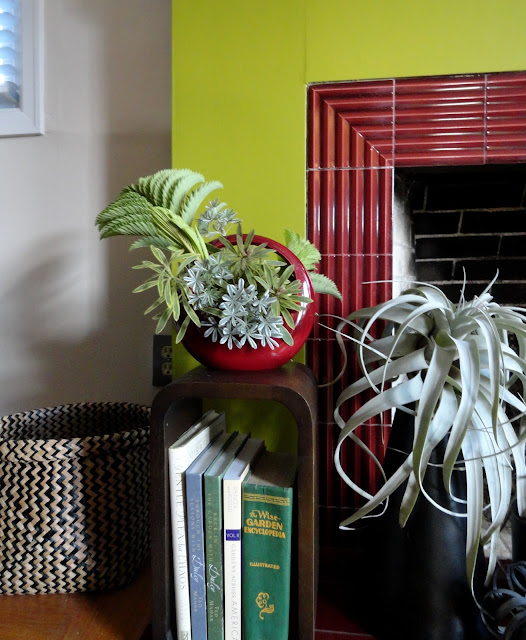