I've been approached before about participating in the Berry Go Round ("a blog carnival devoted to highlighting recent blog posts about any and every aspect of plant life") but honestly I didn't really understand what it was all about. This time however Bom (The Plant Chaser and host for September’s Berry Go Round) emailed me an invite explaining the theme he had chosen for the month and asking if I would to participate. Why, yes of course I would! The theme: "a plant that you really wanted to own and how you eventually acquired it." Oh boy! My mind raced...so many possibilities! I finally settled on my latest acquisition, Grevillea x gaudichaudii (I’ve finally got one!) 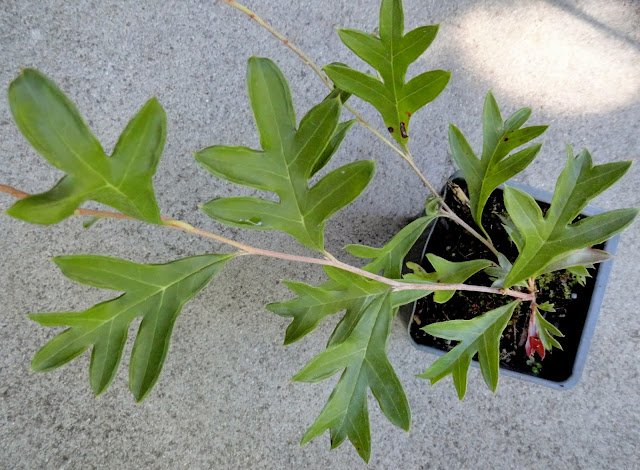 My first sighting of this plant (that I remember) was at the 2012 Northwest Flower & Garden Show in Seattle, mesmerized I wrote on that blog post "I'm afraid this is going to be a hard one to find" (little did I know!)… 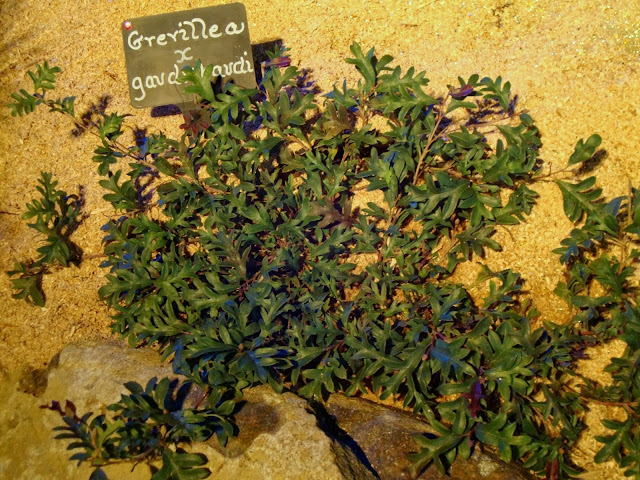 Later I asked the Judith Jones, owner of Fancy Fronds Nursery and the designer of the show garden, about the plant. She directed me to "those boys at Xera" This was to be the first of several promising leads which quickly turned cold. The hunt continued...

My next actual sighting of Mr. gaudichaudii (as I had begun to think of him) was during the 2013 Garden Bloggers Fling in San Francisco, at the Wave Garden… 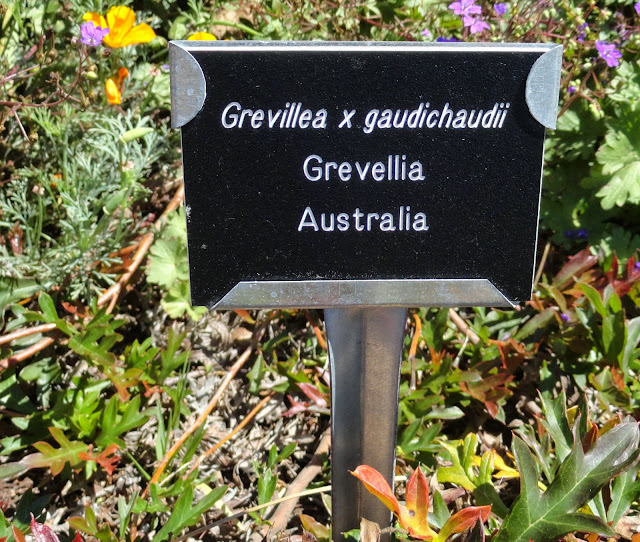 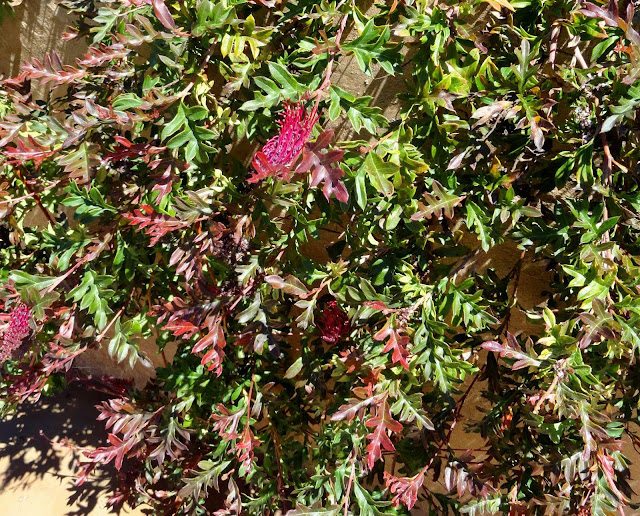 Trust me it was beautiful, even though my photos are poor. So close but yet so far! 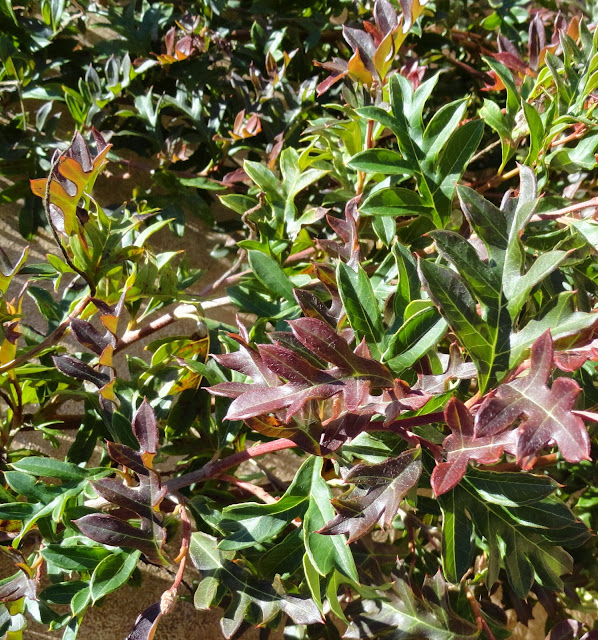 Later that same day while visiting Flora Grubb Gardens I thought I had finally come face to face with a purchasable Mr. gaudichaudii... 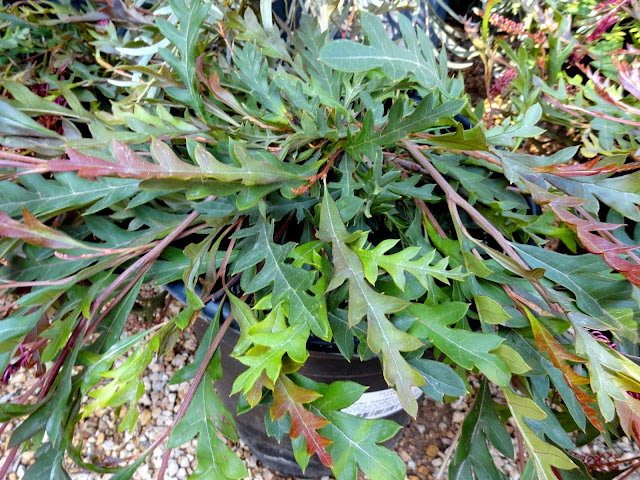 Alas no. This was Grevillea 'Austraflora Fanfare,' less hardy by 10-15 degrees. I was still tempted, but passed it by. Regret filled my dreams that night.

Then a few weeks later, while on a quick stop at the UW Arboretum in Seattle, I discovered this beauty in the Pacific Connections Garden... 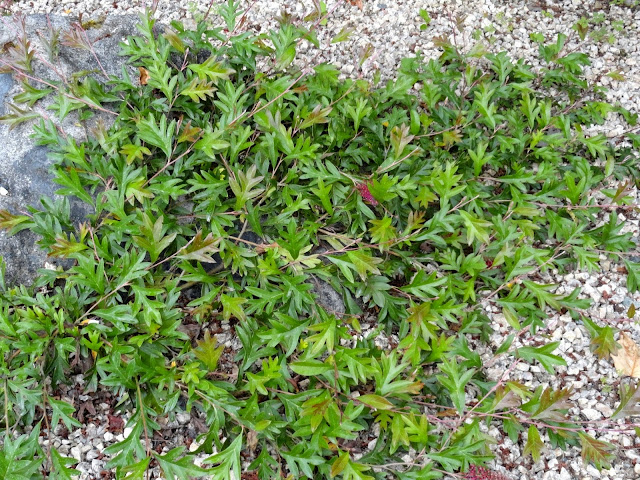 Oh the agony! There it was again.

Are you still with me? Because here's where things get interesting. Late in July my friend Peter (The Outlaw) and I both had the idea to email Ian at The Desert Northwest in Sequim, WA. He didn't have Mr. gaudichaudii on his availability list but you just never know. Guess what! We were in luck, he’d been rooting small cuttings for a year and was willing to part with a pair of 4" containers (one for Peter and one for me). Even better his Desert Northwest was one of the nurseries participating in the Fronderosa Frolic in August in Gold Bar, WA, and Peter planned to attend. So he brought them along, Peter picked it up, and now...it's mine! Oh and get this...the Frolic is held at Judith Jones nursery, Fancy Fronds. Yes the same person who first introduced me to this plant back in February of 2012. The circle is closed. 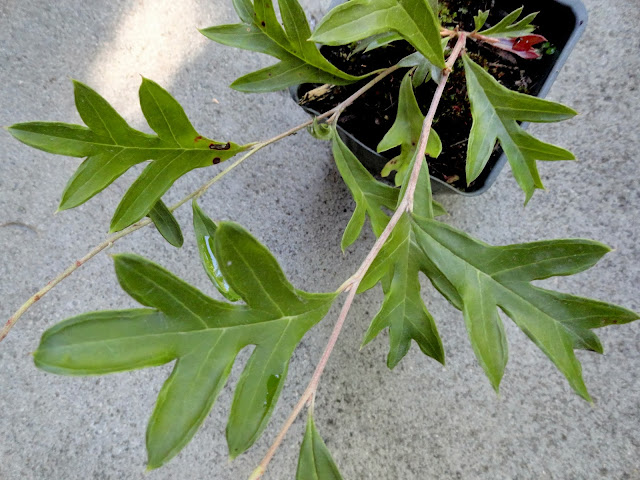 Here's Ian's description: "Grevillea x gaudichaudii (acanthifolia x laurifolia) is a natural hybrid between two species from the Blue Mountains in Australia. Although its form in the wild varies from shrubby and upright to creeping, I have only seen one form in North American cultivation: a prostrate or slightly mounding plant, which essentially functions as a groundcover. It has outstanding lobed green leaves (the new growth being bronzy to reddish) with deep red to almost purple large toothbrush flowers. Another excellent plant for covering banks or hillsides, or a large drier area of the garden, it seems to require very good drainage to perform well. Other forms of this hybrid should be introduced to cultivation as well. It seems to be able to handle temperatures in the 10 - 14°F range if it's properly sited and well hardened off - and perhaps it can go lower." (source)

Thank you Bom for giving me an excuse to tell this story, thank you Peter and Ian for helping me to acquire this much sought after plant, now if I can just keep it alive…