Bloomday at the danger garden annex… 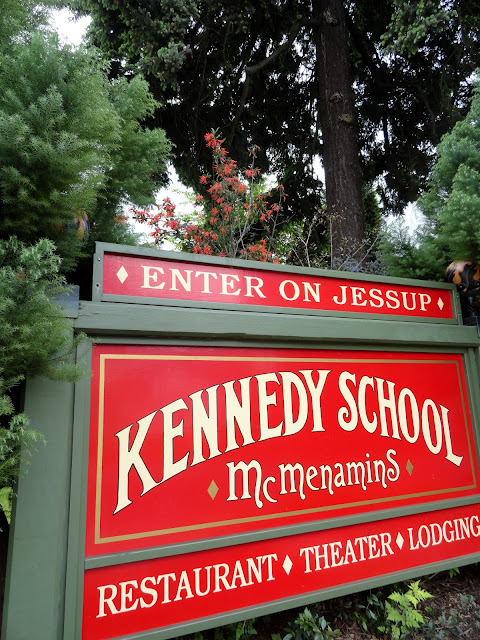 It was a drive-by on my way home from grocery shopping that sent me back on a dog-walk, after all the Chilean Fire Bush (Embothrium coccineum) were blooming and I wanted to see them close-up. 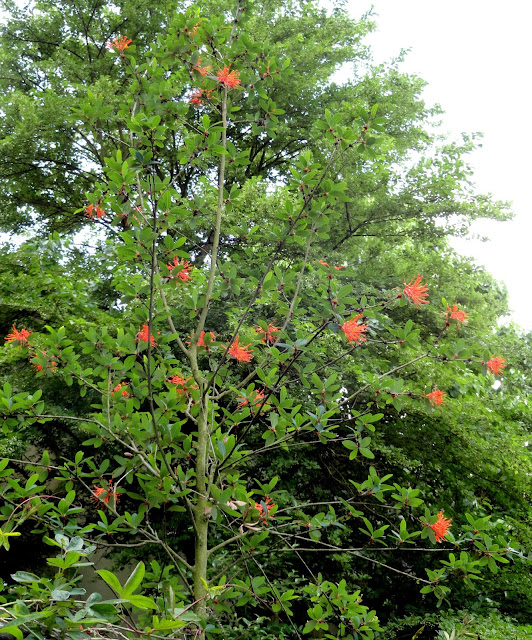 There are two trees at the KS, one right behind their sign on Simpson and 33rd (shown above) and this one, near the northeast corner of the building (if you’re in the area and want to see them in person). 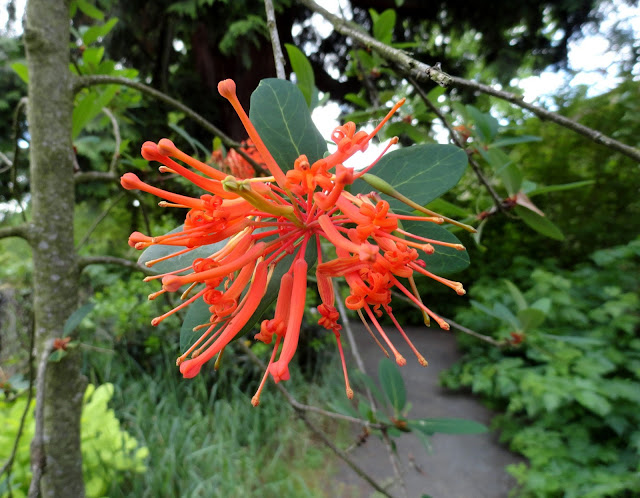 I also have two in my garden, but mine couldn’t be called trees, since they’re only about 12” tall. Maybe someday… 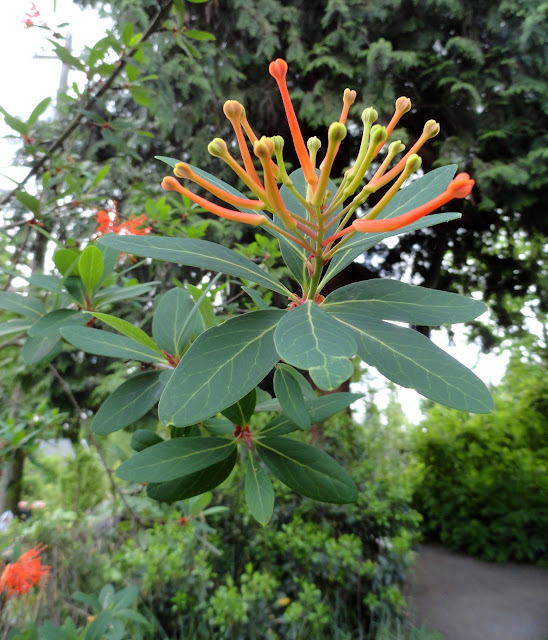 Another tiny plant in my garden that has achieved a much larger stature at the KS is this Fremontodendron…. 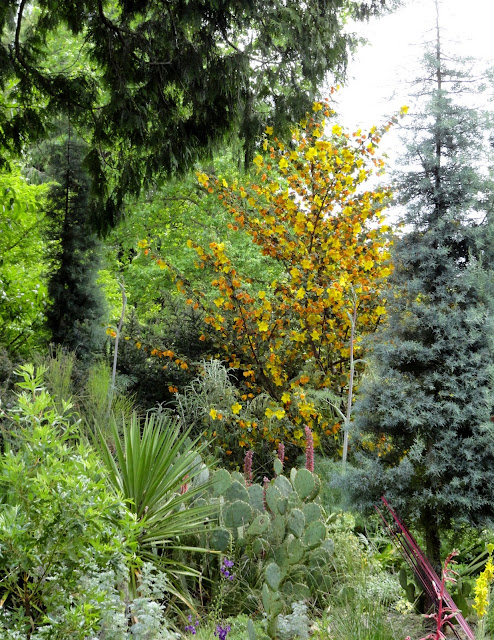 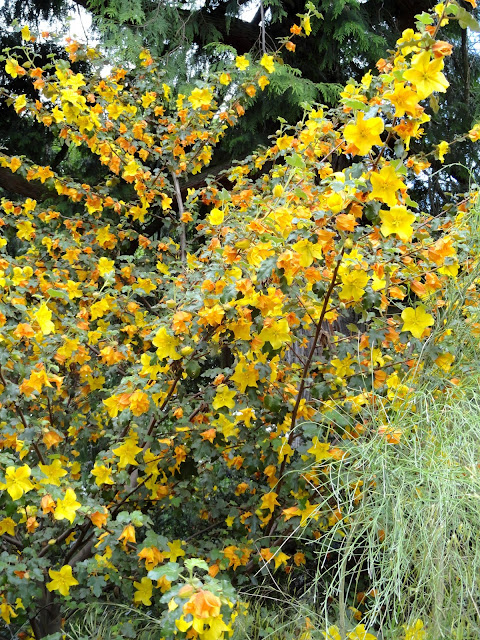 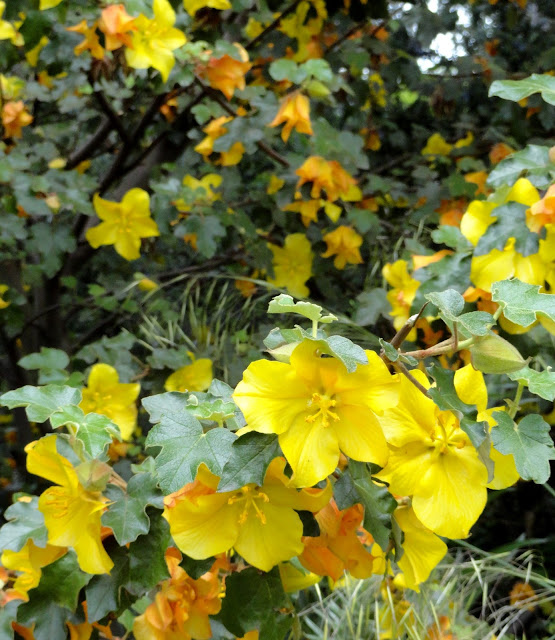 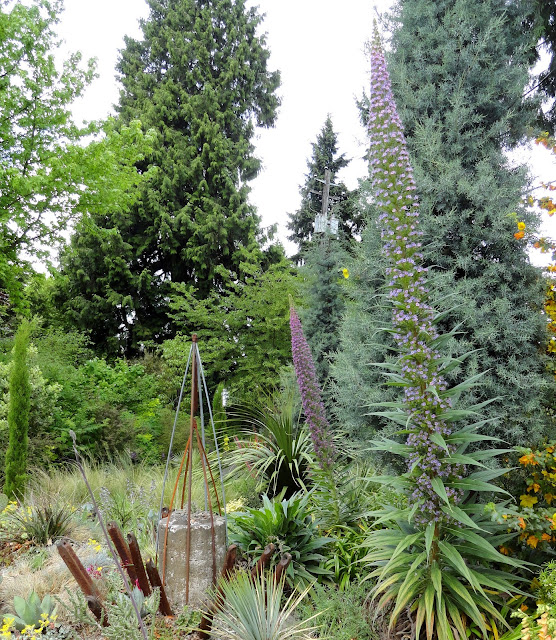 And a bloom-spike on their Manfreda undulata 'Chocolate Chip'… 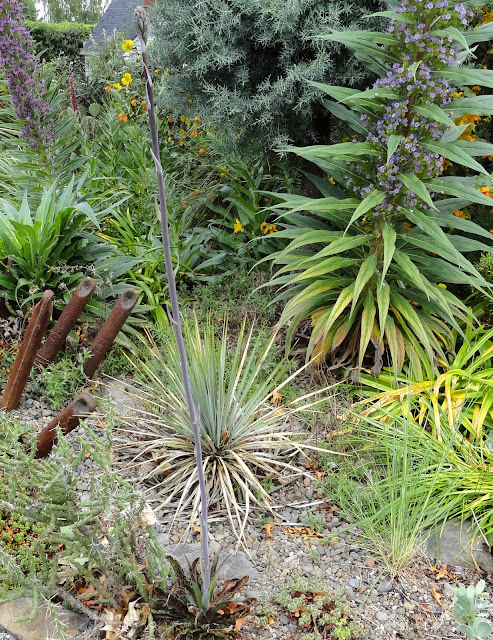 Hard to see isn’t it? Here’s a close up of the business end… 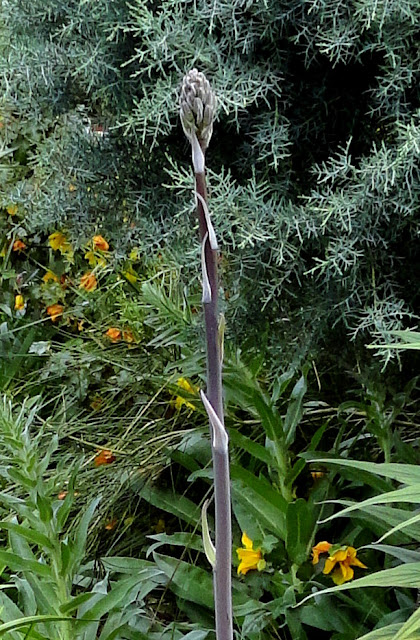 This little guy has leaves and flowers like an Echium, but I have no idea what it is. 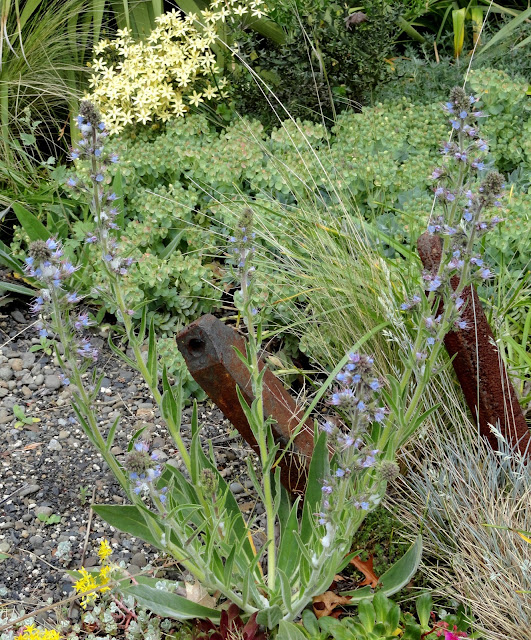 Beschorneria with a bloom-spike! (Alison if you’re reading this is what I hope you see soon from that Beschorneria I forced on you at the GB plant swap)… 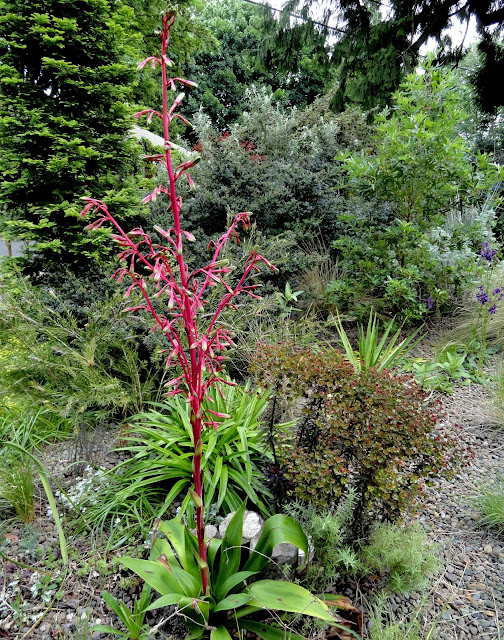 At first I thought those tiny yellow flowers were coming from the sedum, but upon a closer look I see that's not the case, plus no sedum I know has ever bloomed that nicely. 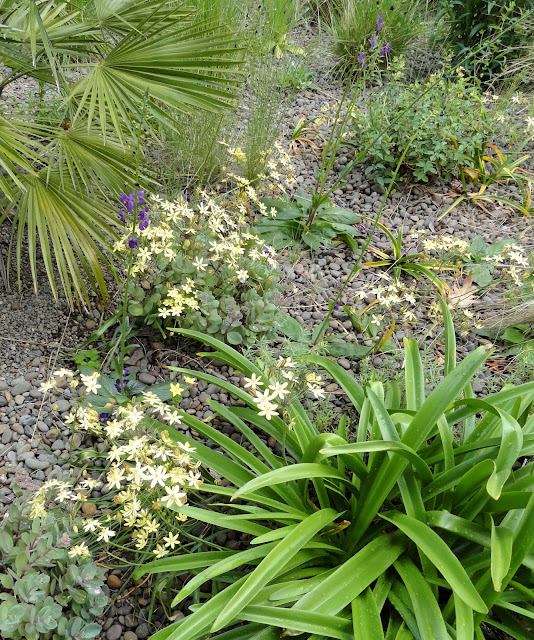 I do love a greenish dogwood blossom. Doesn’t everyone? 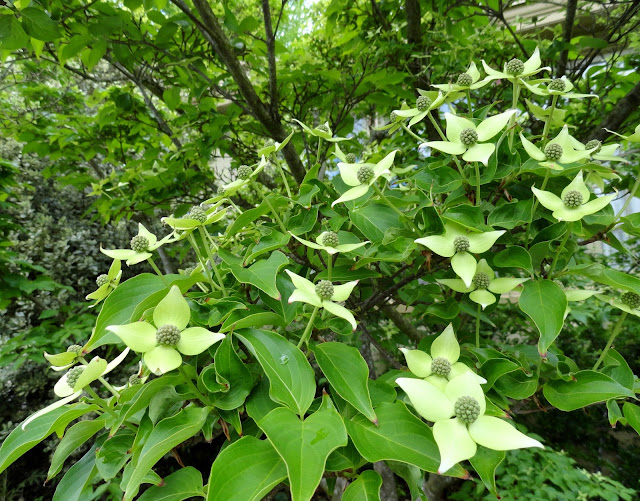 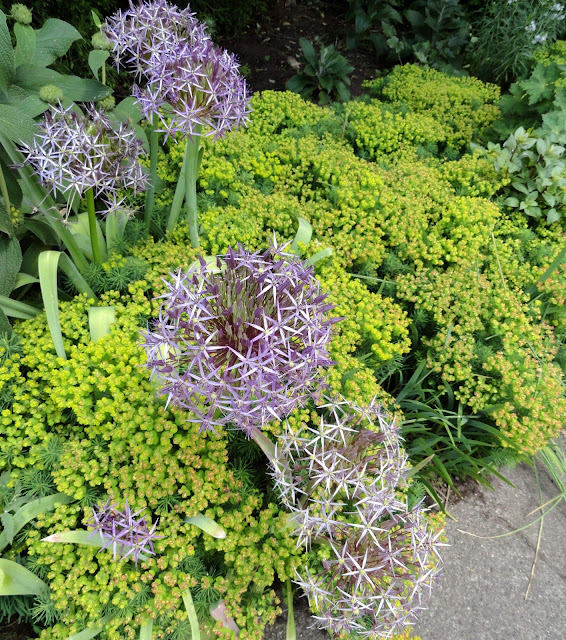 It kills me that I couldn’t get a better shot of this! I waited and waited for the sun to go behind a cloud but no luck. I believe it’s a Eryngium proteiflorum, the eryngium with a protea like flower… 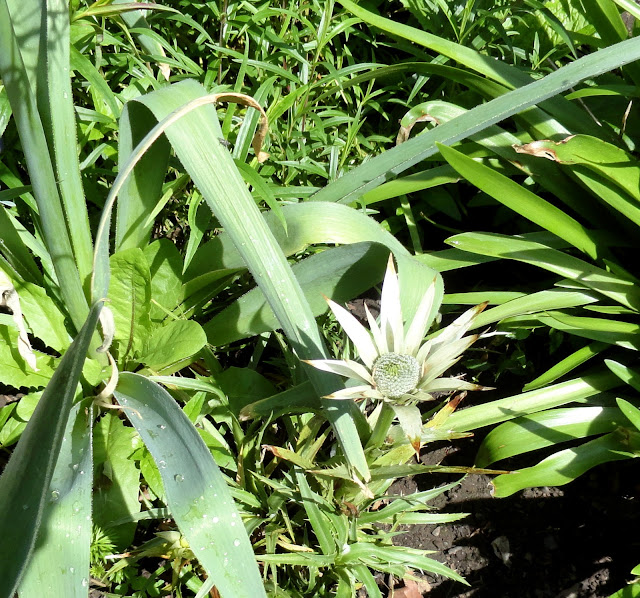 I’ve never seen one blooming “in real life,” mine died a quick death long before a flower was a possibility. 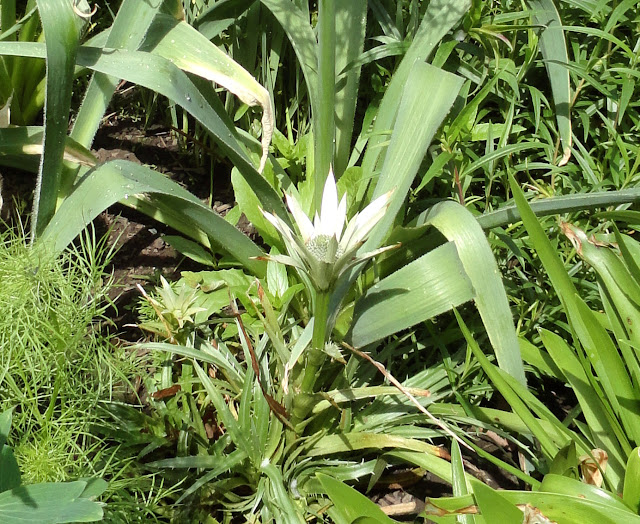 Knowing there is rarely just one of anything along this border I searched and found another…couldn’t get a good shot of it either. 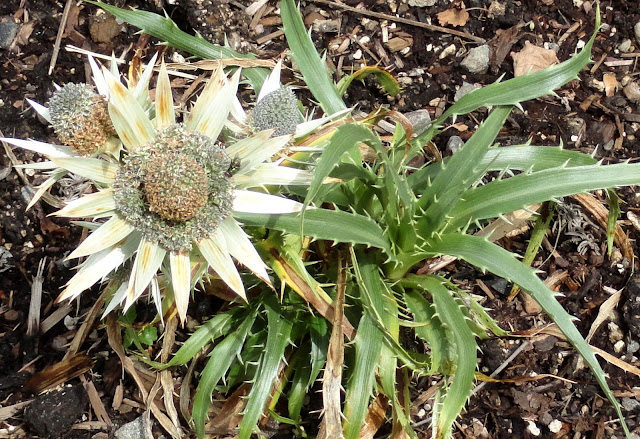 One more thing…back in my garden I discovered that the KS Manfreda undulata 'Chocolate Chips' isn’t the only one in the neighborhood that’s going to bloom. Mine is too! 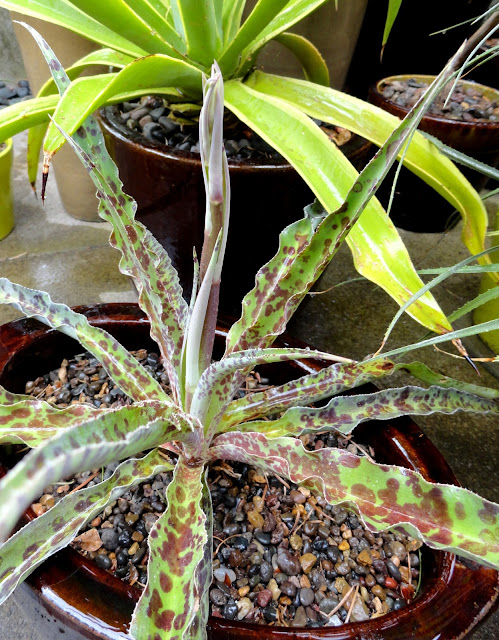