In a Vase on Monday: transistions 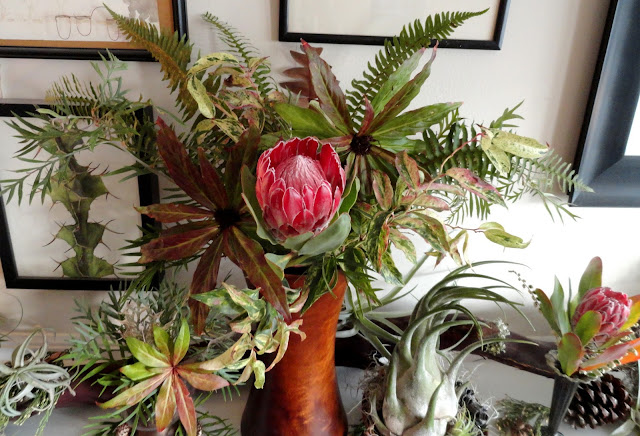 I'm sure I've written this before – I love to decorate for Christmas – but come the 26th, I'm over it. Completely and totally. This year I thought I'd keep a few elements of the poinsettia display, but update it with a slightly spring feel. 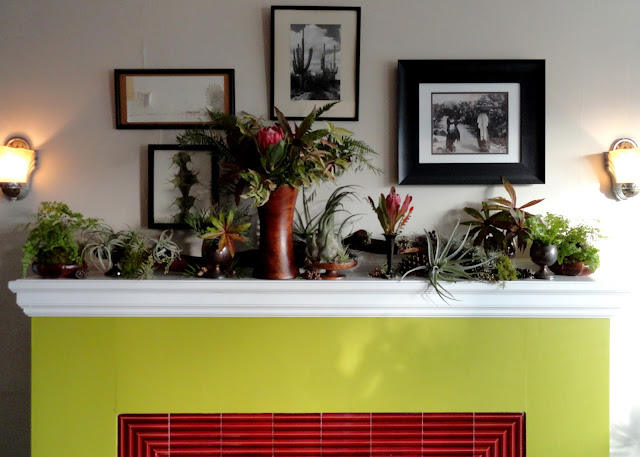 I'm not meticulous enough for real kokedama, but I wanted to bring a pair of Maidenhair ferns (Adiantum venustum) inside and put them in these great vintage wooden bowls. A little moss from the garden, left over Tillandsia usneoides and wire and I had something that would at least contain the root ball. 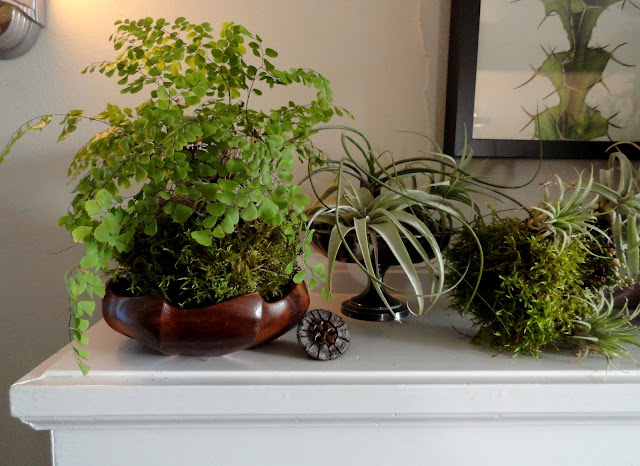 The silver goblets are reused from the Christmas display, this one is filled with Grevillea 'Peaches and Cream' foliage and a Lysimachia paridiformis var. stenophylla stem. A couple more Grevillea leaves are underneath, along with some sort of Proteaceous cones I brought back from California. 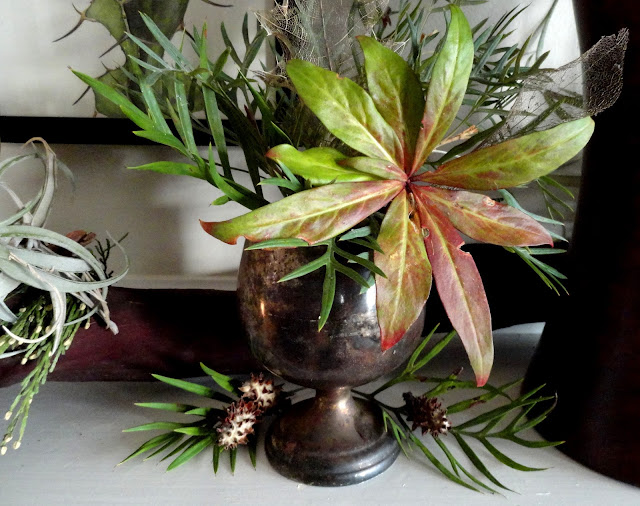 The mix of tarnished silver and wood is a bit odd, but it's what I'd envisioned so I went with it. The tall vase is an oldie, when I want to fill it with cut flowers and foliage I drop a glass tumbler inside to hold the water. 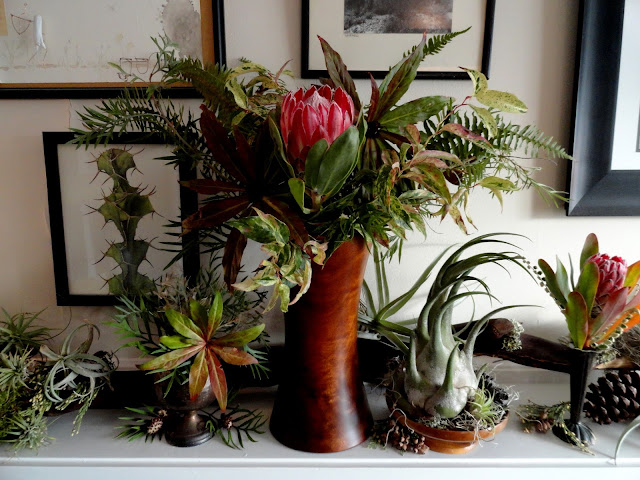 In it are cuttings from Leucothoe fontanesiana 'Rainbow'... 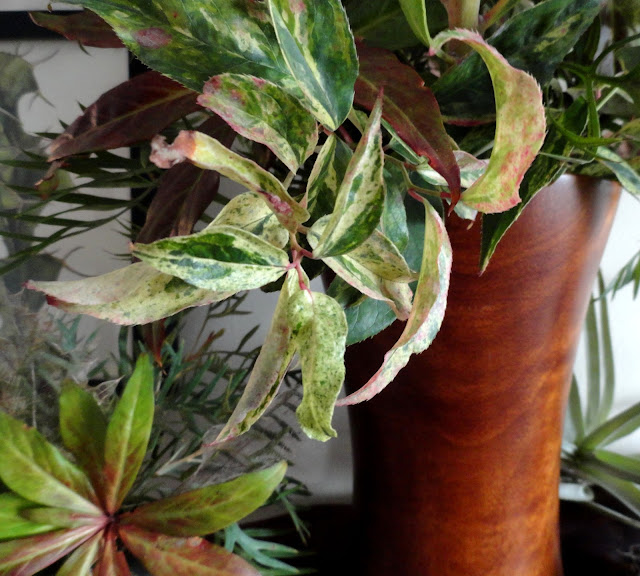 A single Protea bloom (not from my garden, of course), more Grevillea foliage... 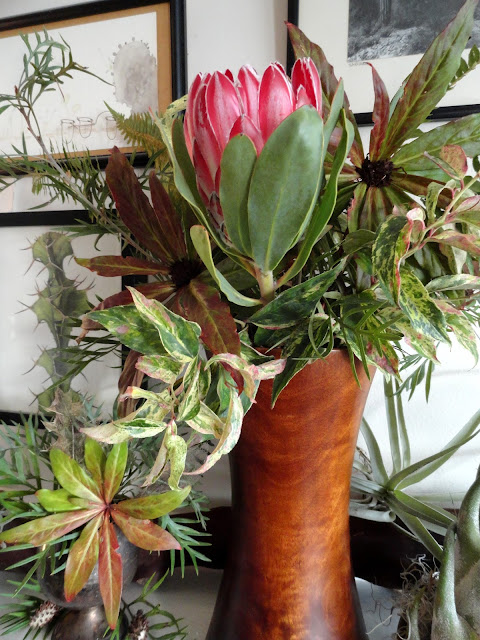 And a few fronds from a sword fern (Polystichum munitum) complete the mess. 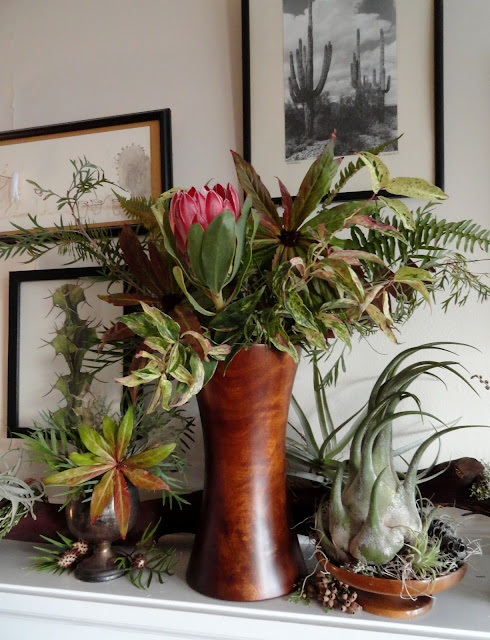 I find small pedestals like this invaluable for displaying Tillandsia, I was thrilled when I recently spotted this wooden one at a thrift shop. 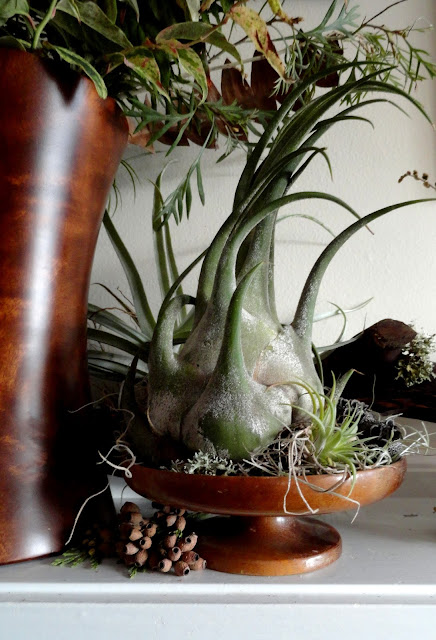 Another Protea bloom tucked in a very small silver vase, joined by a couple fronds from a wavy cloak fern (Cheilanthes sinuata/Astrolepis sinuata). 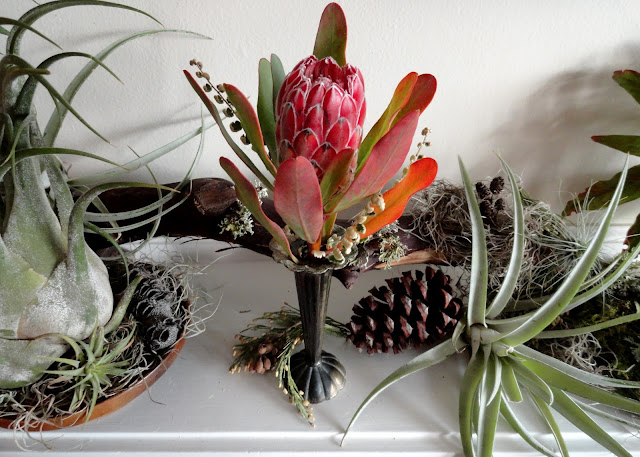 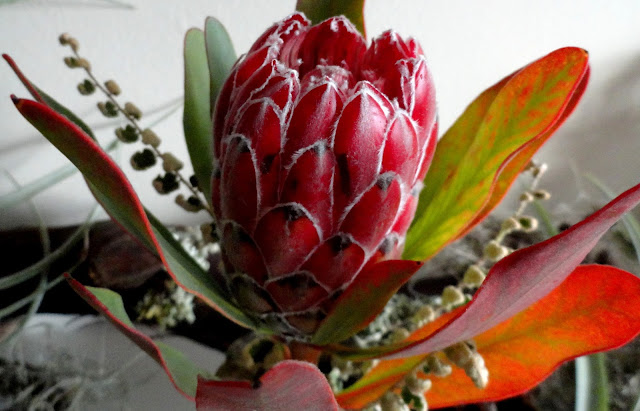 Have you noticed the long, thin, branch running behind? It's from an Arctostaphylos (Manzanita) and was brought to me by this kind lady. She noticed a leaning Arctostaphylos in my front garden and thought a matching brace would be just the thing to keep it upright. It will be! And it will eventually make it out there... 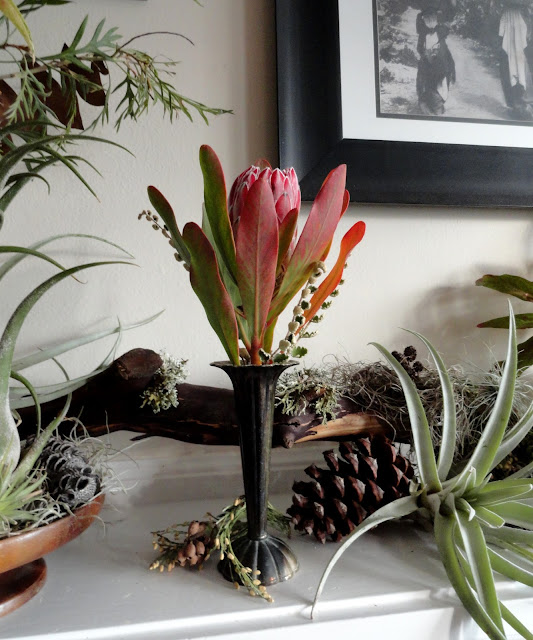 I couldn't help but cover the cut ends with a little moss collected from my garden. Then of course tuck in a few Tillandsia. 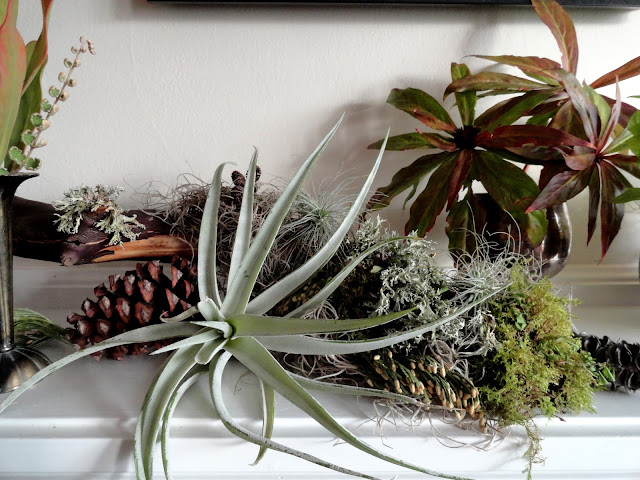 And another cone brought back from Southern California, this one from a Banksia. 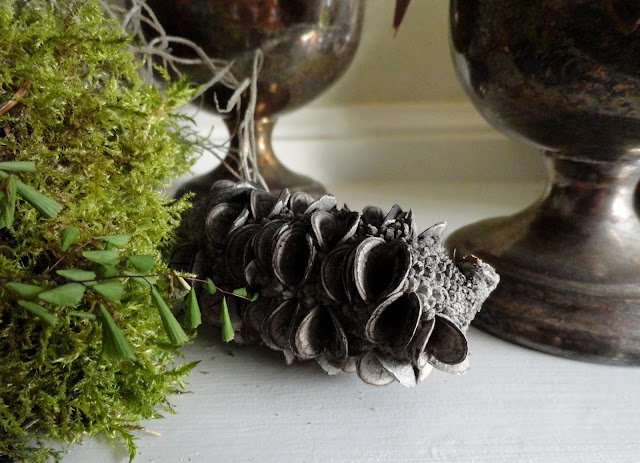 More goblets, out front is Asplenium nidus 'Crispy Wave' joined by Lysimachia paridiformis var. stenophylla in the back... 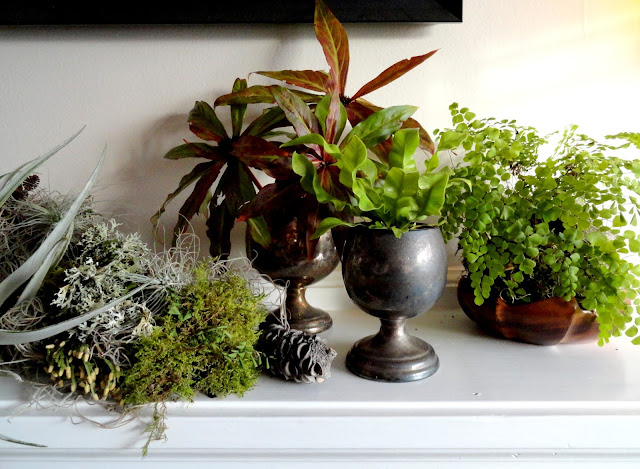 And the second Maidenhair fern. 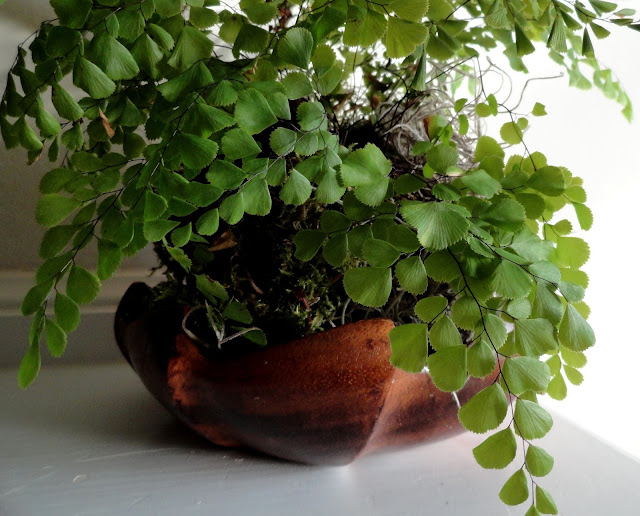 Not shown above – because it's not on the mantle but another group of plants nearby – this one in particular I'm curious about... 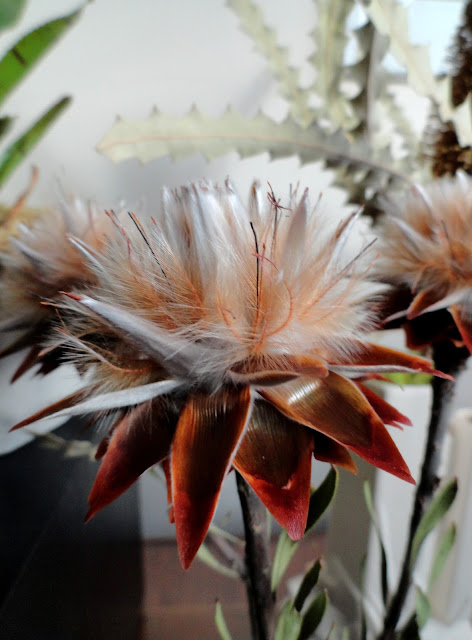 I bought the stem of three prior to leaving town. Back then they were tight cones, they've since opened to what you see here. 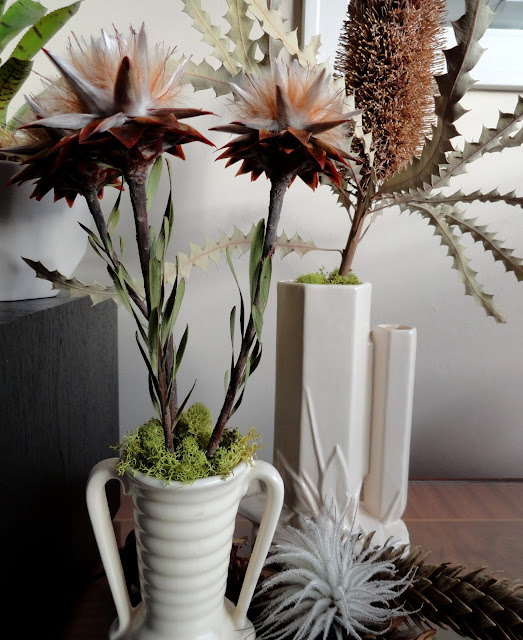 I thought it was a Protea, but the closest I've found to identifying it online is Protea scolymocephala, but I just don't think that's right. Help? 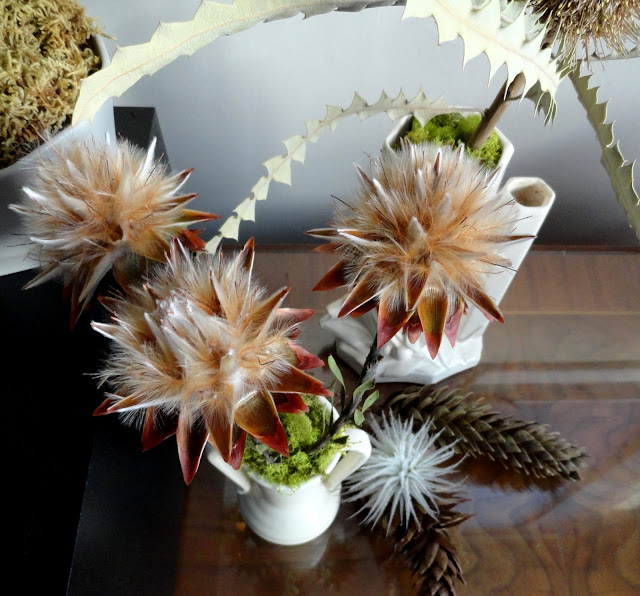 As you've probably heard "In a Vase on Monday" is an blogger's meme hosted by Cathy at Rambling in the Garden. This is my entry for the week, click here to see what others have done this first week of the new year... 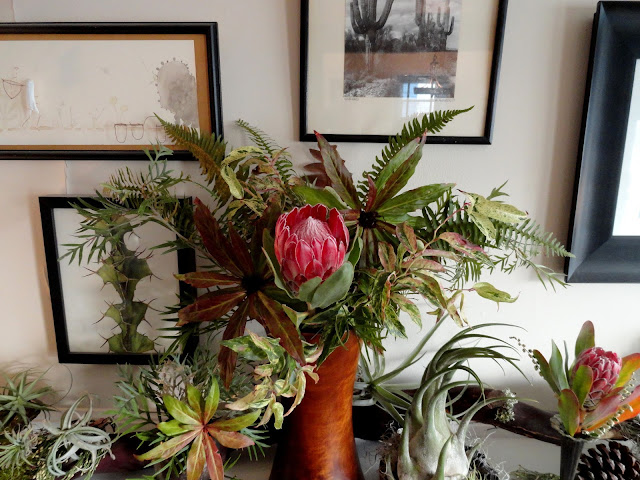