In a vase on Monday: something new, to compliment the old...

This entire mantel arrangement was the subject of my last In a Vase on Monday post, on January 4th. 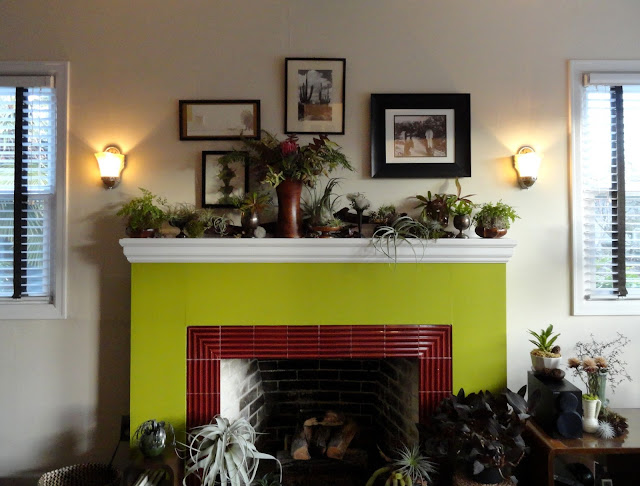 Everything is still looking great, with a tiny exception or two... 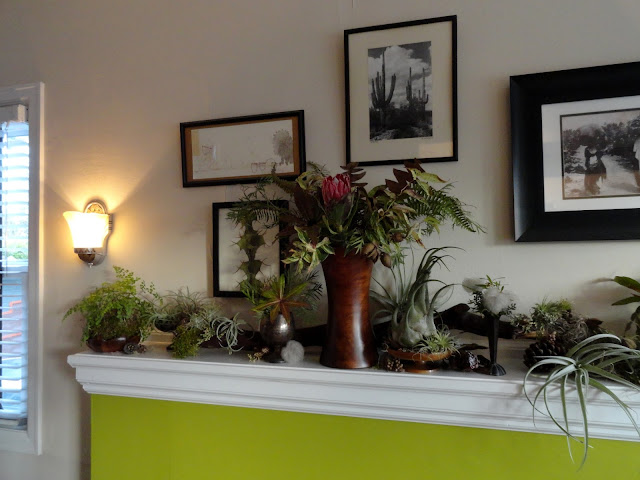 So I decided this week's vase would be something for the dining table, something that compliments the mantle theme. 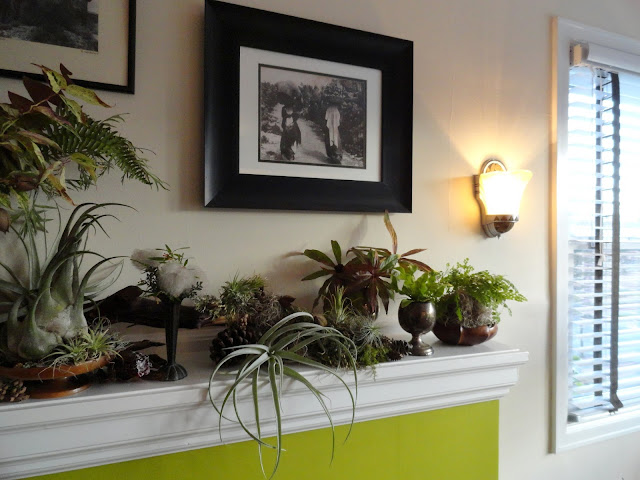 I scouted around for a container I hadn't used before, something that fit with the colors on the mantle. Ah! My vintage Frankoma planter... 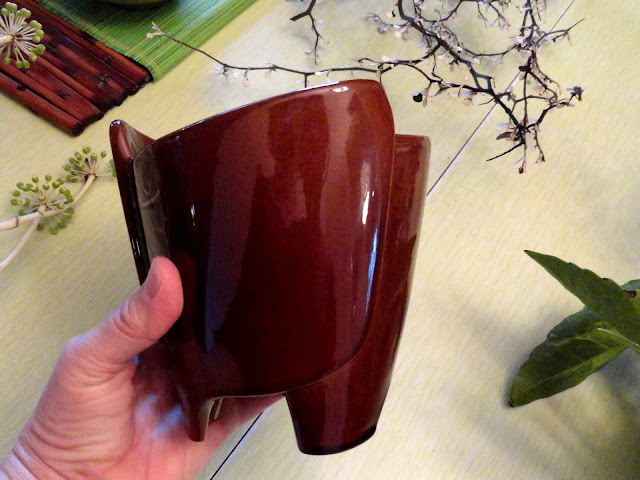 I always think of it as the Franklinia planter, wrong. That's a tree. 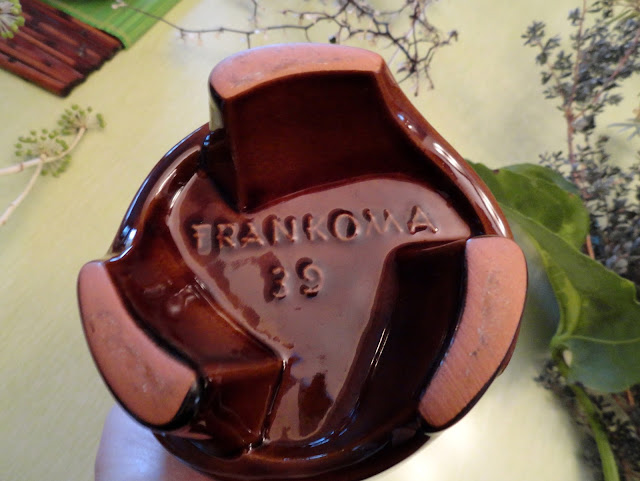 So gathering cuttings...I wanted something big to anchor things and thought one of these Fatsia japonica 'Variegata' leaves would be just the ticket. 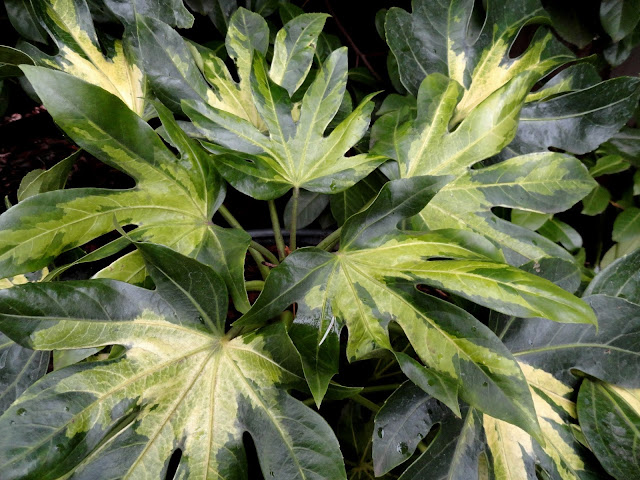 There are a few blooms in my garden right now, but none are really superstar material, at least none that I wanted to cut. I figured a few sprigs of Grevillea ‘Poorinda Leane’ would give a hint of floral color. 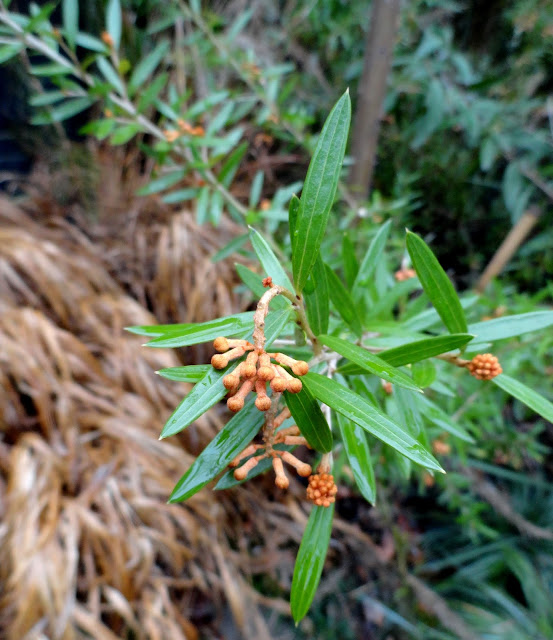 Flowers past, the seed-heads of Clematis tibetana var. vernayi are such amazing puff-balls (as long as you get them before the rain ruins them), why not include those too? 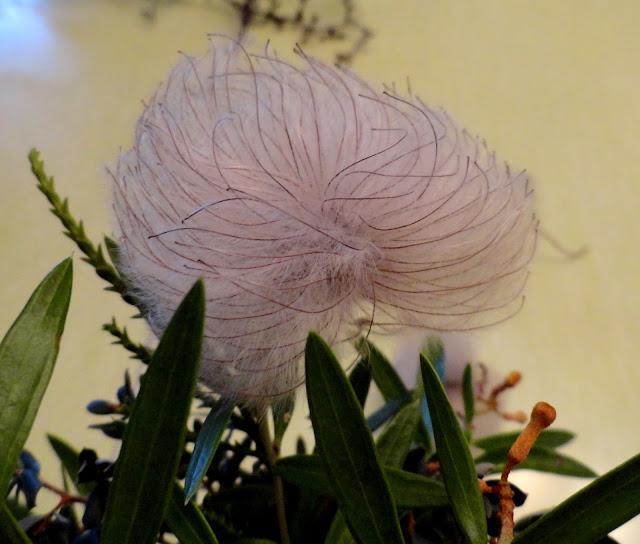 The rangy stems of Leptospermum lanigerum are hard to appreciate unless you're close to them, or the plant is featured against a solid background. What the heck, I cut a couple of those. 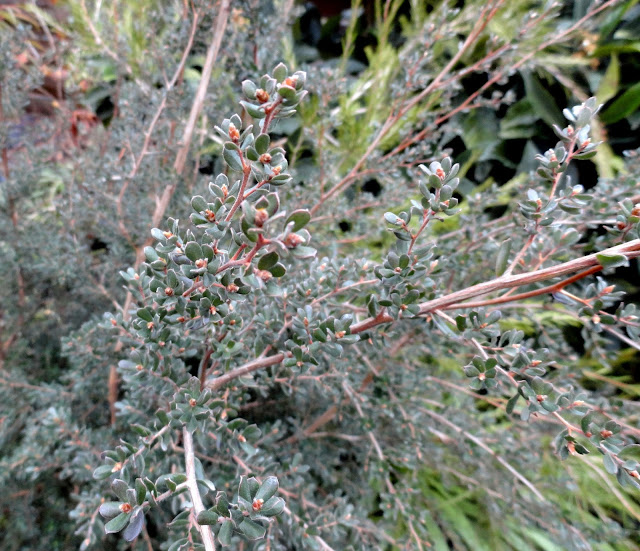 A few Hebe 'Karo Golden Esk' branches were also cut. I've been in serious Hebe lust lately and thought it was time to try them as cut stems. 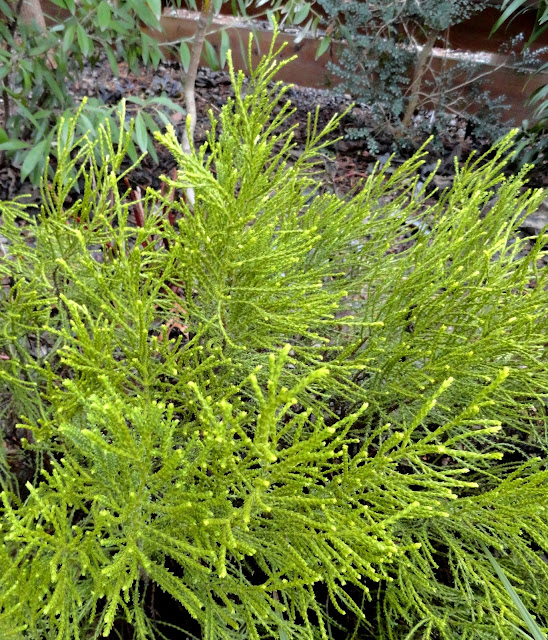 I couldn't get over the need for a statement flower or two. Finally my eyes settled on the fruit of the Fatsia japonica. I would have loved for them to have turned to black, but the white-ish green stage will work. 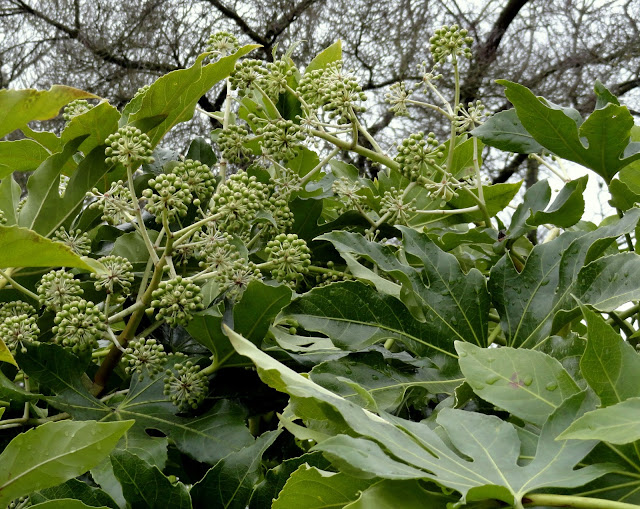 And what the heck, a couple of branches of Corokia Cotoneaster for strange structure. 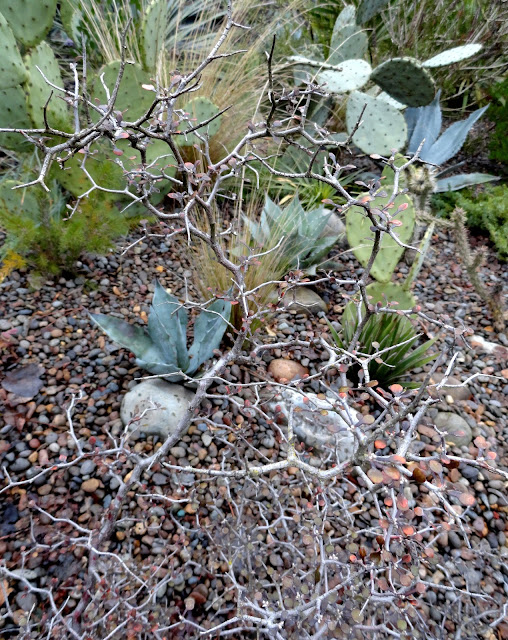 And a great opportunity to see the white backs of the leaves, something you rarely see on the plant. 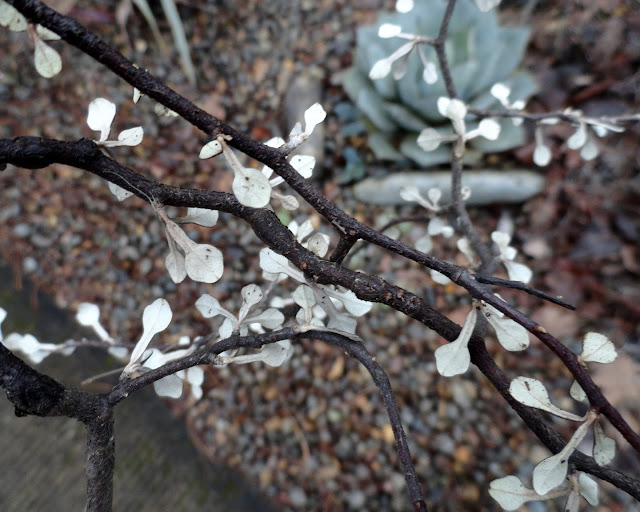 The finished arrangement, which sadly doesn't include the Corokia Cotoneaster branches. It was crazy enough without them - I put them in and things just went too far. Besides their dark coloring was just a bit too dramatic for this shades of green and yellow creation. 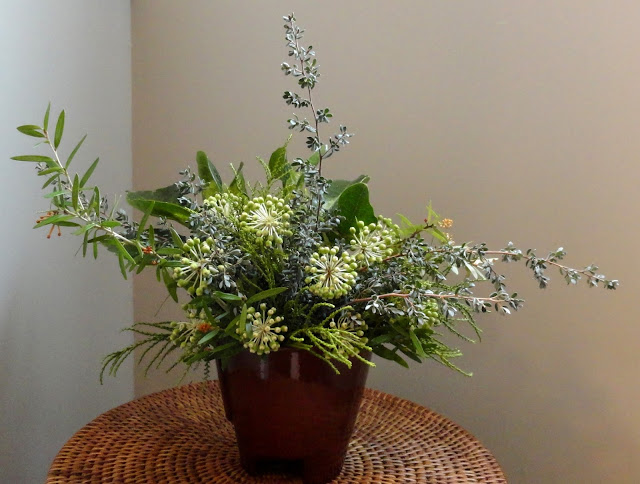 The strong curves and bends of the Fatsia leaf add all the drama this one needs. 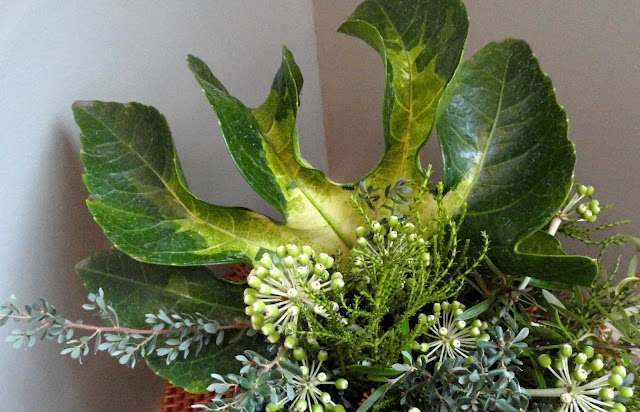 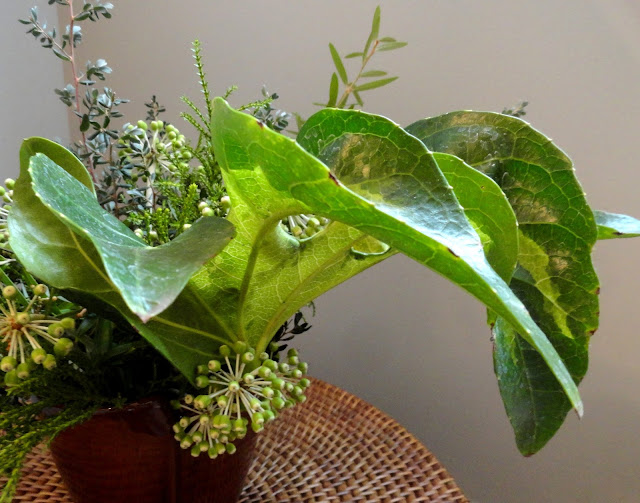 The Clematis seed heads were also a no go, they looked like I dropped cotton balls in the mix. Instead they became part of a small vase of leftover pieces. 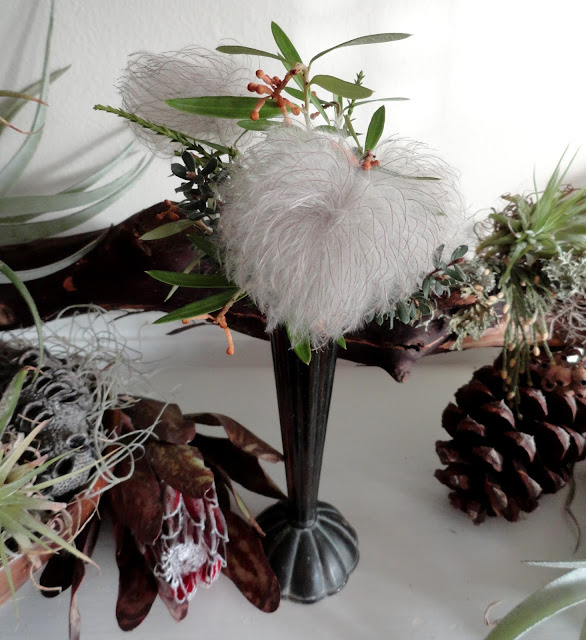 The Corokia went in it's own vase too...and it looks like I need to turn a couple branches around to se the white sides! 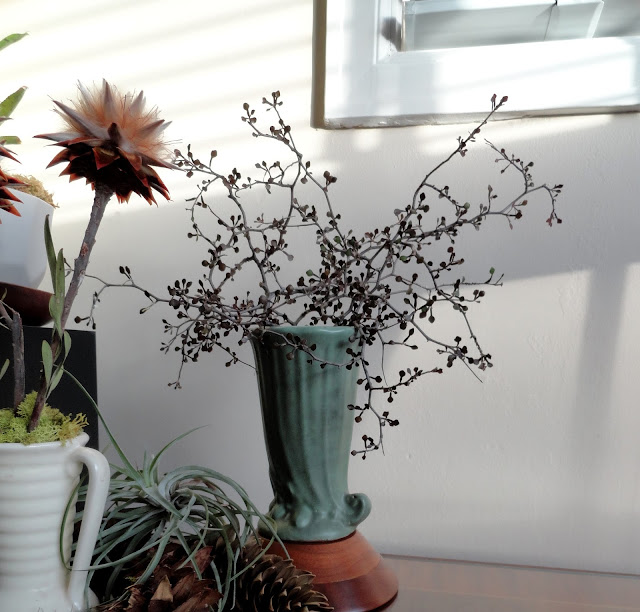 The main arrangement on the dining table...neither the bamboo placemat or the green one seemed quite right on their own, together is just right... 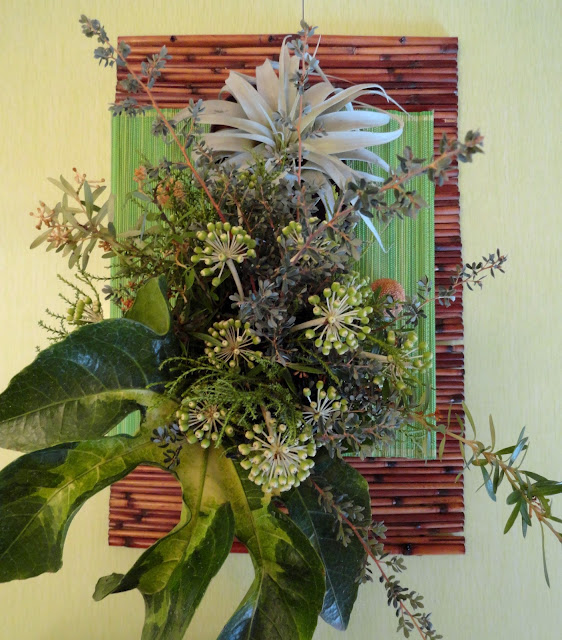 In a Vase on Monday is hosted at Rambling in the Garden. I owe Cathy a huge thank you for giving me the push to do more of this cutting and arranging thing. I've always done it, and enjoyed it, but I'm doing more now that I have an excuse to share what I come up with. Thank you Cathy!