My plant haul, from the 2022 NPA Study Weekend

The event was a Hardy Plant Study Weekend hosted by the Northwest Perennial Alliance based in Bellevue, Washington, and it was a most excellent five day adventure! The point of the long weekend was touring private gardens and catching up with plant people, but of course I managed to accumulate a nice plant haul as well... 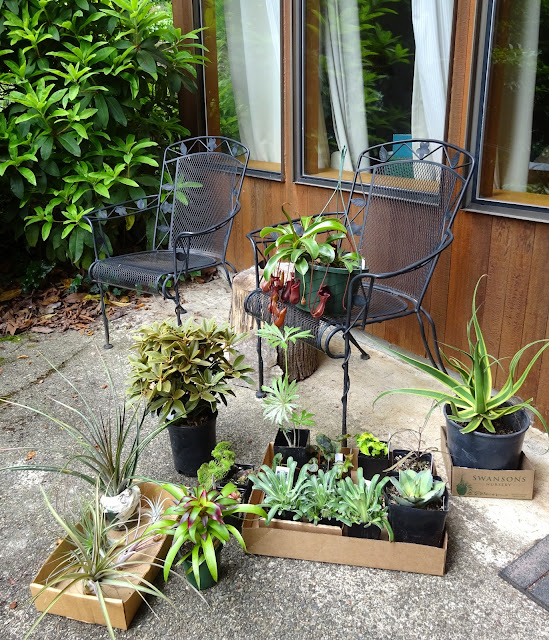 My home base for the weekend was an Airbnb on Mercer Island. That's where I snapped the above photo of my plant haul, and this one of Lake Washington as I unpacked my car... Here's the run-down of my plant acquisitions in the order they became mine: first up, a Rhododendron 'Strawberry Sorbet' from Wells Medina Nursery. I didn't plan to buy a rhododendron, but with foliage like that, well how could I refuse? 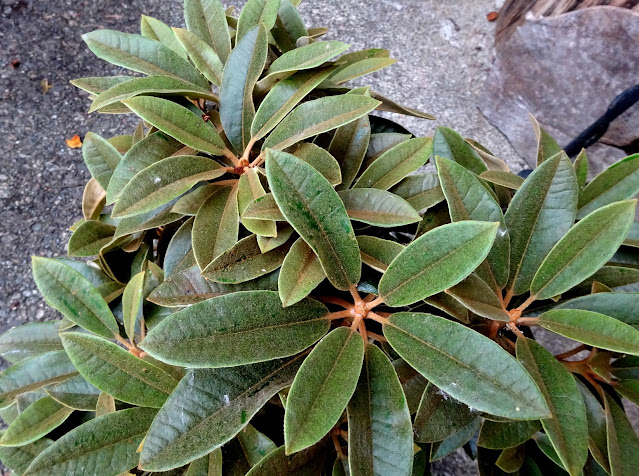 "Another A+ foliage plant from Frank Fujioka, R. 'Strawberry Sorbet' has thick leaves with orange indumentum on the underside of each leaf. This new hybrid will grow 4-5 ft tall and wide, with very handsome leaves, dark-green with suede-like felt on the backsides, giving each leaf more thickness. This natural 'insect proofing' will add to the plant's value over time. Does best in a bit of shade, and is hardy to zone 8." (source)
I wish you could have been standing next to me at the plant sale which was part of the Study Weekend events, when I mentioned my new rhododendron—and it's fabulous foliage—within earshot of the fellow selling "REAL" rhododendrons at the Chimacum Woods booth. His disgust was palatable as he scoffed, "oh, a HYBRID..." whatever... 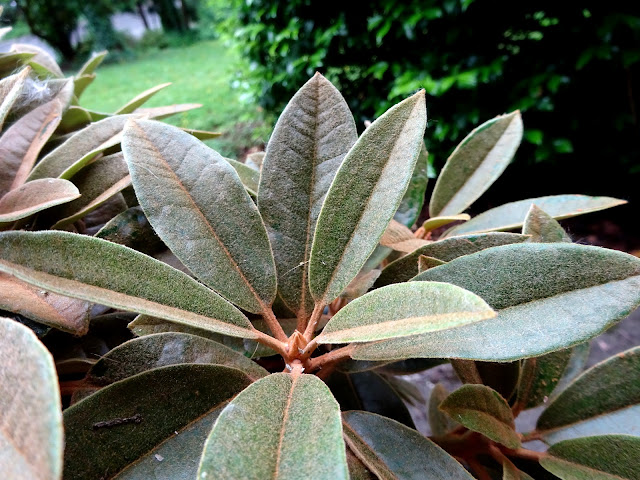 Also from Wells Medina, Rosularia platyphylla. It's in the Crassulaceae family and hardy to Zone 5. I wonder what those little seedlings would grow up to be? I'll never know as I've already pulled them. 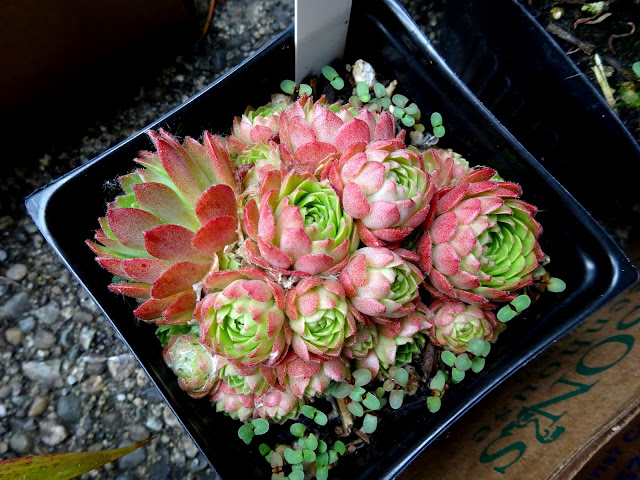 Sedum rupestre 'Cristatum' (Wells Medina). I've unsuccessfully experimented with this one in the past, here's hoping I'll get it to take hold and grow to look like this photo from Pinterest. 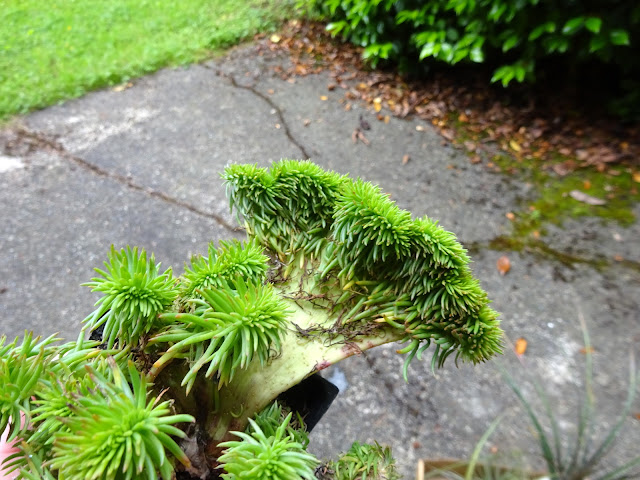 This syneilesis hybrid—part of a plant originally from Far Reaches Farm—was a gift division from my friend Camille's garden. 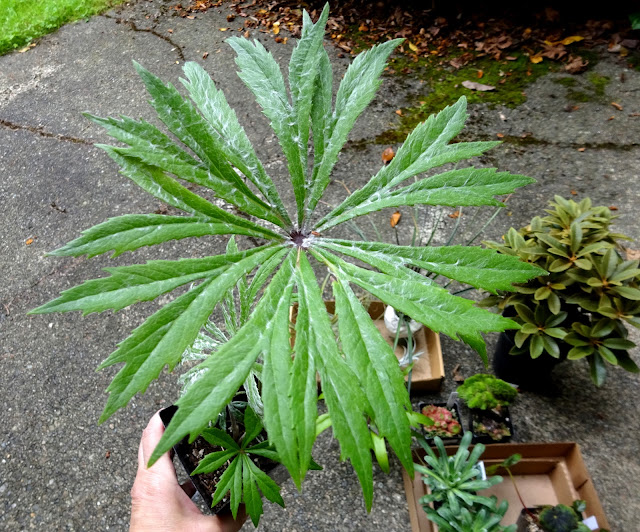 I fell head over heels for it when I visited her garden last fall (photo below from her garden) and she dug me a piece this spring. As part of the NPS Study Weekend Committee, Camille worked her tail off to make sure we had fantastic gardens to visit during this event, thanks Camille! I can't wait to see my baby plant grow up to look like yours! 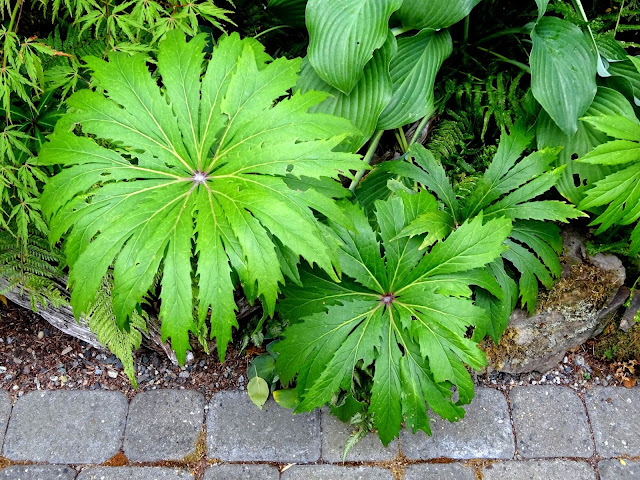 Naturally there were agaves! This dramatic fellow goes by the name Agave bracteosa 'Stingray'. It's one that Bryon Jones (of the Pt Defiance Zoo & Aquarium) has been growing on for years and finally decided to part with. My friend Scott Meyer was kind enough to pick it up, and handed it off during the Study Weekend festivities. 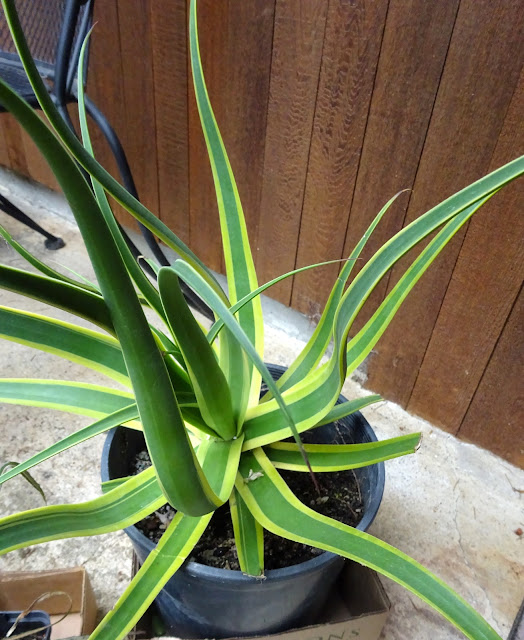 Scott also passed on to me this Agave parryi ssp. huachucensis 'Excelsior' that came to him via Bryon. Isn't it a looker? I think I'm going to be brave and try it in the ground... 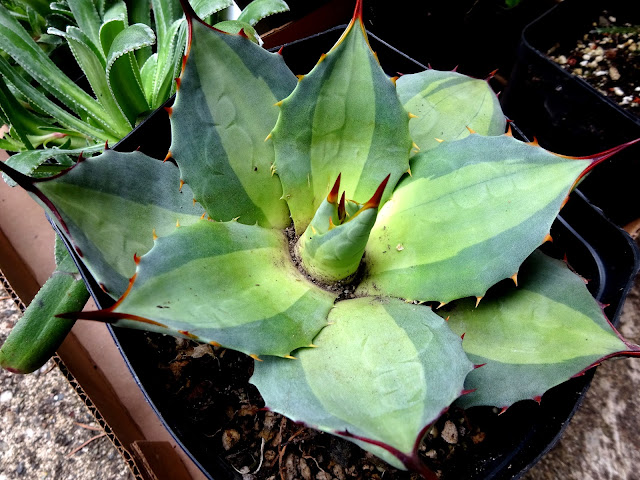 From Maggie Soderstrom (seed growing whiz that she is) I scored a pair of begonias that just might be hardy here in Zone 8: there are two each of Begonia aff. asperifolia and Begonia sp. Michael Wickenden collection U614. Look at those leaves! 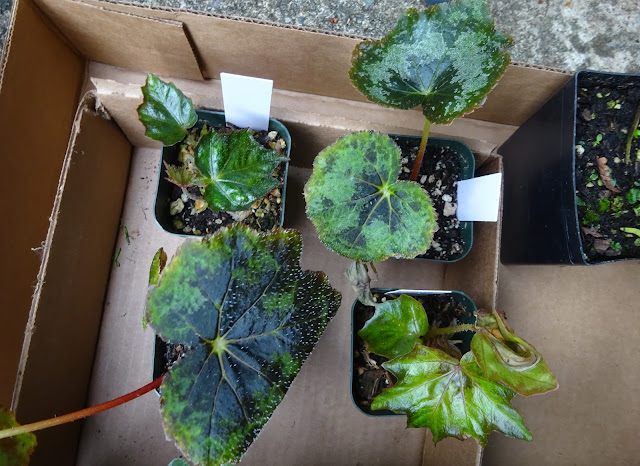 Speaking of Maggie; she, Scott. and I skipped out on the Saturday lecture portion of the Study Weekend events and instead headed north to visit Christianson's Nursery in Skagit Valley. Christianson's is one of the few large nurseries that continues to bring a great selection of plants to the Northwest Flower & Garden Festival each year and Scott has been encouraging me to visit them for awhile. I'm glad I finally did, it had a great vibe, and great plants.
This portion of an old lath house that collapsed in a storm has been left standing at the rear of the nursery. 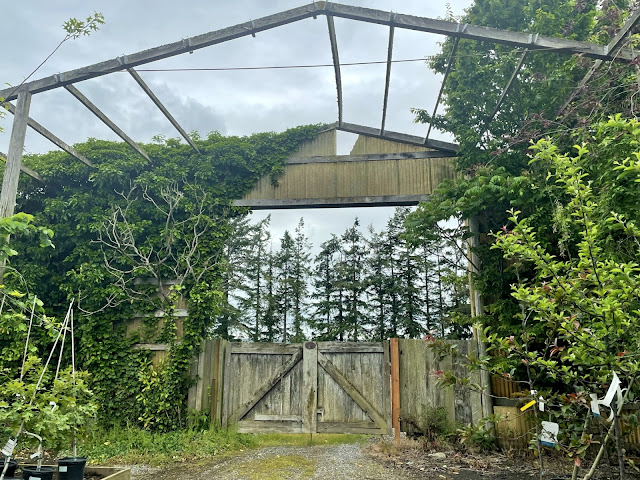 From our visit to Christianson's I scored this Nepenthes lowii x ventricosa 'Red'—I wasn't planning to buy another nepenthes, but after the raccoon ass-hats decimated my smaller plants in containers on the ground, well, I decided another hanging plant was the answer. 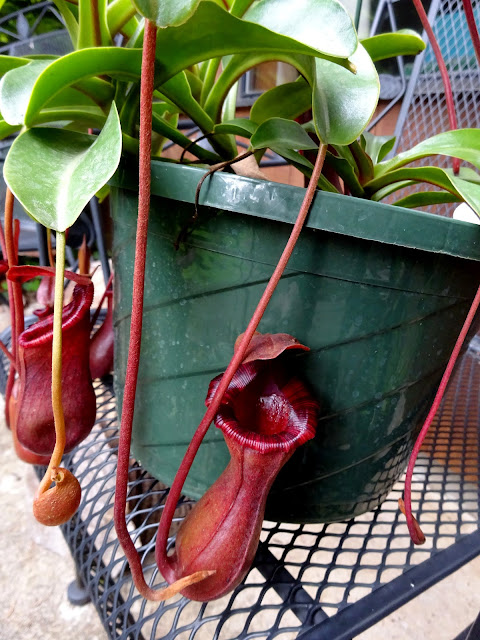 I also bought a Coniogramme emeiensis 'Golden Zebra', because ferns were on sale and I have a place to tuck this one in... 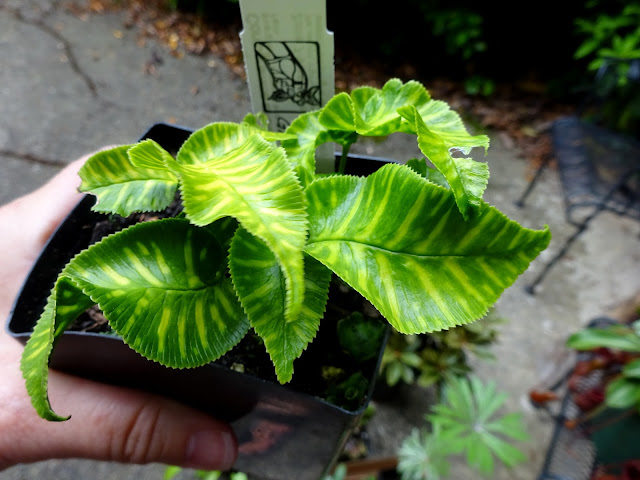 And a random guzmania, because I love the red edges and wanted to drop it in with my other bromeliads in the fern bed. 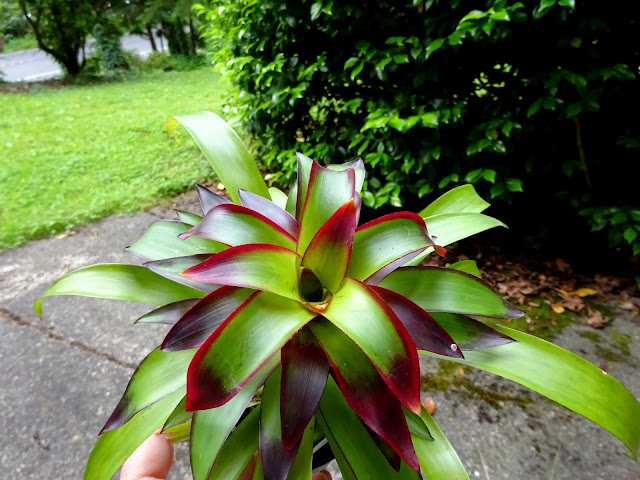 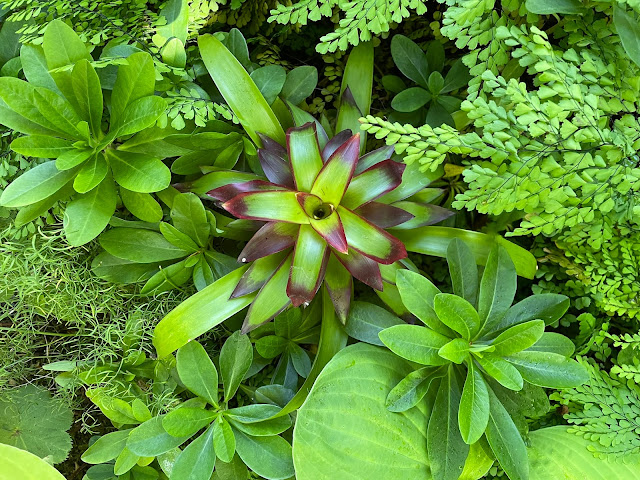 And look, it's sending out a couple of pups already. 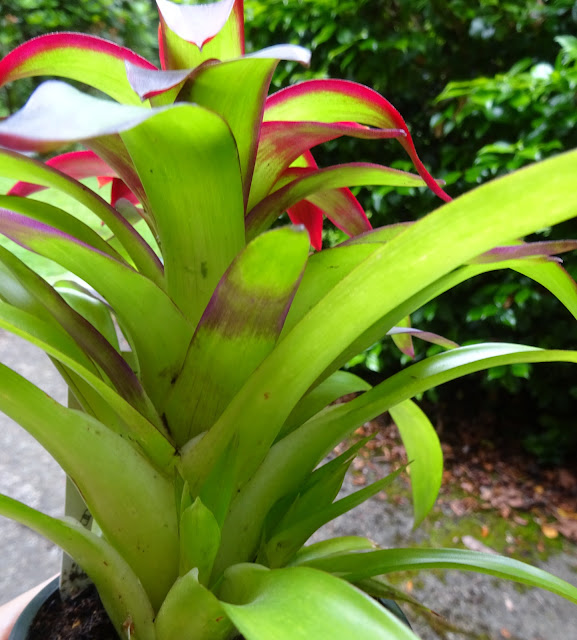 Our next stop was Swansons Nursery, where I was very tempted by the best looking anigozanthos / kangaroo paws I've seen in ages. They had both dark red and yellow and all were covered in blooms. 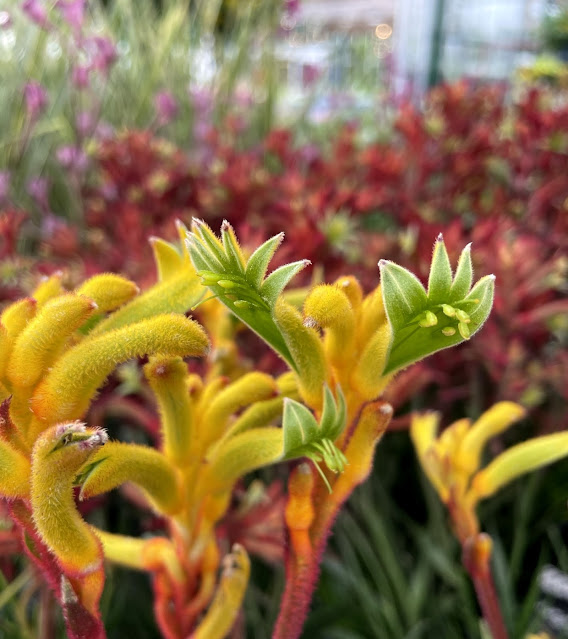 I resisted that temptation though, and instead went for a trio of Saxifraga cotyledon—cause they are quite large compared to my other saxifrage. 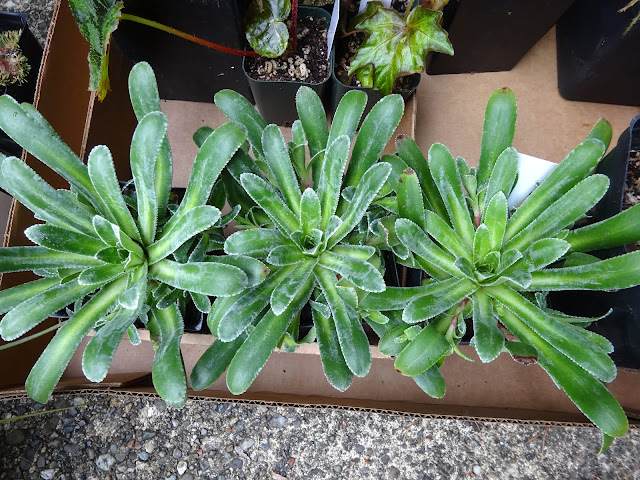 The next exiting part of the haul isn't a plant at all, but rather a curvy metal container... 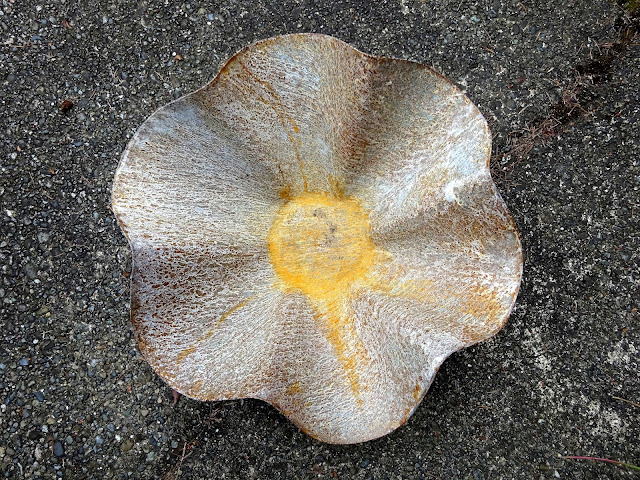 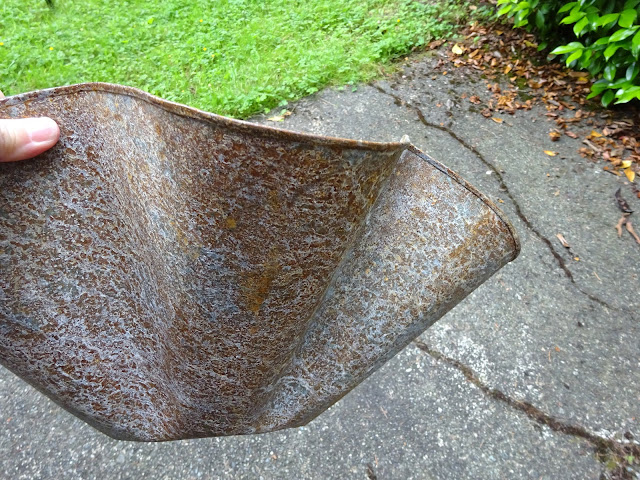 The creative and generous Gillian Mathews gave it to me, as she knew I loved hers, seen here in her Seattle garden... 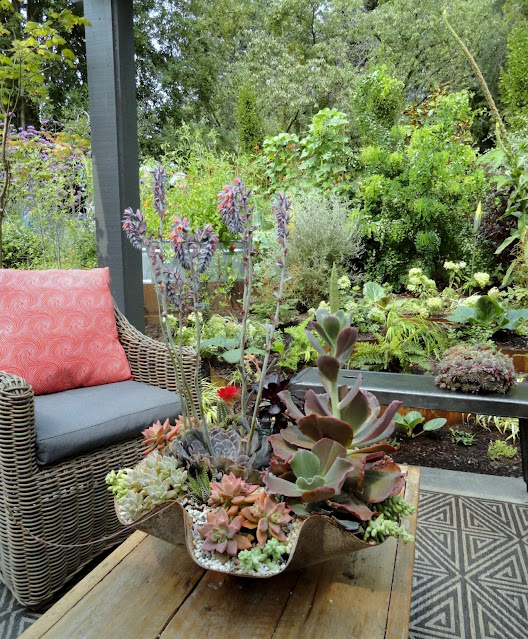 Next up, another gift, but this one again plant—and yes it's alive. It's a Pseudopanax crassifolius seedling from Daniel Sparler's garden. 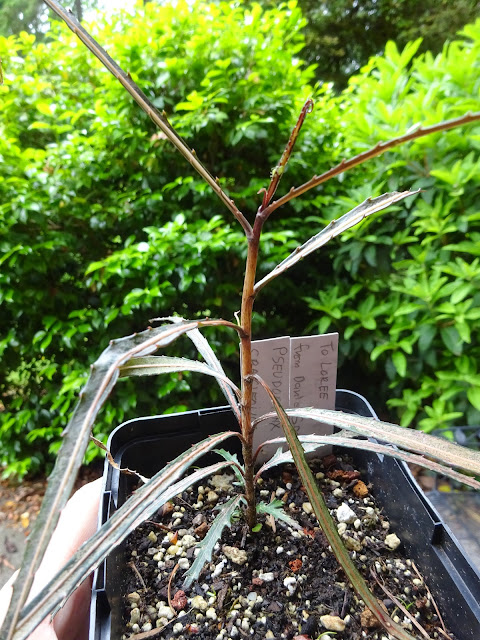 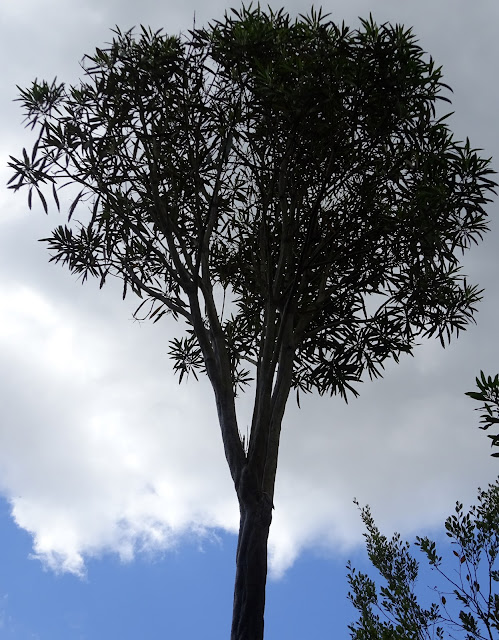 I have a lot to say about this exciting seedling but will wait until I post photos from Daniel's garden to explain.
More gifts to round out this haul! I visited my friends Erin and Matt for dinner on my last night in the Seattle/Bellevue area and Matt pawned off some more tillandisa on me generously gave me more of his tillandsia collection—he had some exciting new additions and needed to clear up some space. 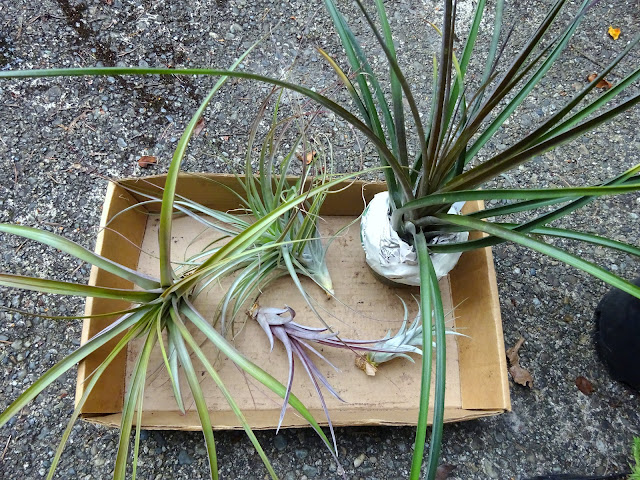 I don't know how I've gotten so lucky, as I also took some of his plants home when I visited last February. I can't tell you the specific names (I'm hopeless when it comes to keeping tillandsia straight) except for the one in the pot, that's a Tillandsia 'Oeseriana'—and that's the end of this haul post!
—   —   —
All material © 2009-2022 by Loree Bohl for danger garden. Unauthorized reproduction prohibited and just plain rude.