A vase full of sarracenia...

Several of my sarracenia pitchers had bent and fallen over. I'm tempted to blame the squirrels, as I've seen them jump right through the plants in a frenzy, looking for somewhere to hide their nuts. I also learned this weekend that if a pitcher is particularly full of insects it can become so heavy it falls over... 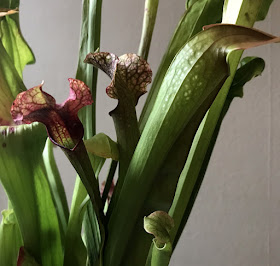 Whatever the cause, the look wasn't especially great, so I trimmed off all the broken bits and put them in a vase on the dining table. 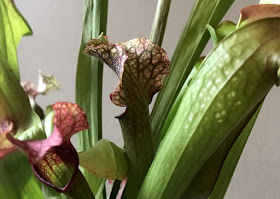 All the better to appreciate their unique coloration. 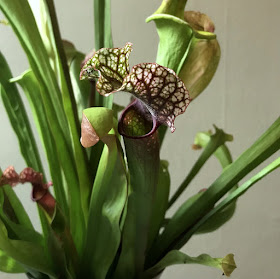 A few nights later I was making dinner when a big fat fly followed Andrew in the door. It buzzed around the kitchen trying to get into the food. 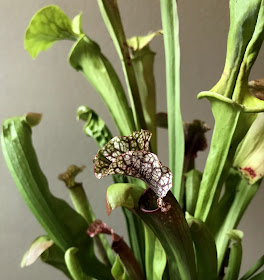 And then followed the food to the dining table, where it quickly became more obsessed with the sarracenia and dived right into one. 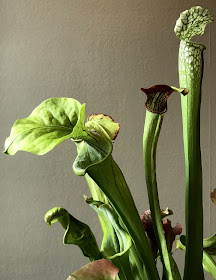 We ate our dinner listening to it buzzzzzzz trying to get out. 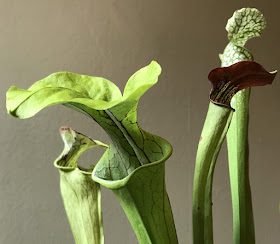 Once we were done I grabbed the pitcher the fly had flown into and took it outside and shook it upside down. The fly flew out and wasted no time getting the hell away. 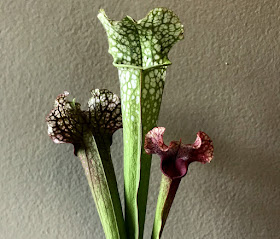 Since the pitchers were already doomed I saw no point in letting the fly die too. It was quite nice though, to have it otherwise occupied while we ate. 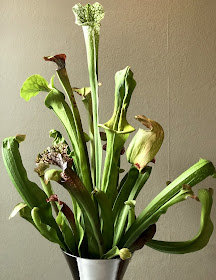